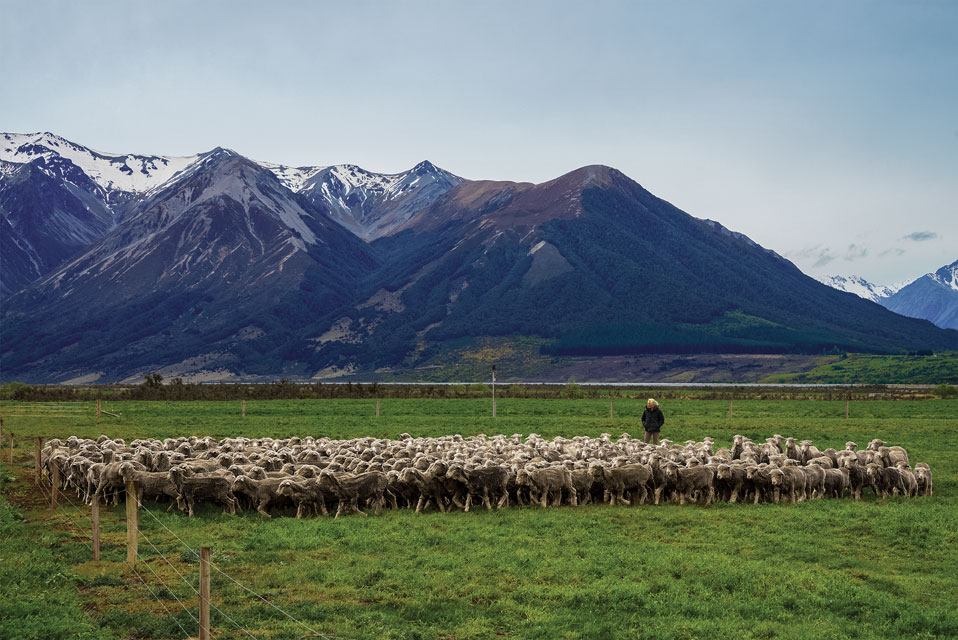 Maybe it’s the long winter and the fact that the Rakaia Gorge road usually washes out a few times per year, cutting Glenaan Station off from the rest of the South Island of New Zealand. Maybe it’s the fact that, at 2,556 acres, Glenaan is on the small side for a sheep station in the lamb-happy markets of New Zealand and Australia. But there’s something going on at Glenaan that has Paul and Prue Ensor thinking long-term about their flock of Merinos and how to get the most from their sheep — and from every acre.

Sheep have run on Glenaan Station since 1858. But they’ve never been managed as closely — or as productively — as they are currently.

Paul Ensor’s family has run sheep up the gorge since his great-grandfather settled at Glenaan in 1916 and began amassing 25,000 acres of government leasehold. The station ran from the banks of the Rakaia River to the tops of the nearby mountains.

Huge change. In 2006, the government cut a deal with the Ensors: give up 90 percent of the lease and take ownership of the remaining 10 percent. The result left the family with the rich hillsides and bottoms, and a new way to handle sheep.

“It totally changed the way we manage,” says Paul Ensor. “We used to let them up and not see them for three months. Now we see them every day. We manage much better, and we get much better quality and returns. It’s a higher-cost system in every way, but far more productive.”

More intensive management makes the most of the Ensors’ resources.

“We’re a rather small property in New Zealand, so we concentrate on doing something really well rather than trying to make a lot of something,” Ensor explains.

A single Merino sheep yields 6 to 7 pounds of clean, premium wool per year.

The couple runs 2,500 Merino ewes, renowned worldwide for their fine wool. They also manage 2,500 hoggets (sheep that have two teeth and haven’t yet been shorn), as well as about 600 Merino lambs, which are sold for meat. A herd of 160 Angus cows and a flock of Romney ewes — better breeders than the Merinos, but with coarser wool — turn excess forage into beef and lamb.

The heart of the Ensors’ management strategy is in the pasture. Benchmarking against other Merino producers, the couple realized that their Merino wool was finer, but that their ewes were smaller, less productive, and lost more weight during the winter than most breeds of sheep.

Merino advantage. The fineness of their wool is the key advantage for the Ensors. Merino wool is renowned for its soft, slender, crimped fibers.

Most of the world’s Merino wool is around 20 microns in diameter. That’s about twice as fine as the wool used in carpets or scratchy sweaters, and five times finer than human hair. Wool from the Ensors’ flock ranges from 17 microns down to 13.6, putting them in the premium “superfine” category. In 2014, their average Merino wool price was NZ$18/kg ($5.50/lb), peaking at NZ$25/kg ($7.64/lb).

Working through the New Zealand Merino Company, which handles about 85 percent of the country’s Merino wool, the Ensors contract a significant portion of their clip to makers of handmade Italian and Japanese suits, where the feel of superfine wool is an absolute must.

Anxious not to lose their premium quality, the Ensors set out to increase their yield — both in wool and meat.

Boosting the productivity of their pastures allowed the Ensors to increase their flock and boost the cattle herd. But it had to be done well, and consistently. When sheep encounter stress or changes in their diet, it can cause a “break,” or weak spot, in the wool. Suddenly, a fleece that would have been showcased in a $10,000 suit would end up being used for socks. Nice socks, to be sure, but not the sort of market that pays as well as top Italian menswear.

The Ensors concentrated their efforts on 1,136 acres of hill fields and 733 acres of river bottom pastures that had historically been planted mainly to cereal ryegrass for decades.

Mixed stand. Alfalfa, which New Zealanders call lucerne, is the secret ingredient. On 300 acres of sloping alluvial soils, the Ensors topdress single superphosphate onto a blend of alfalfa, fescue, brome, and plantain, which yield 6 to 8 metric tons per hectare (or 2.7 to 3.5 short tons per acre) of rich, palatable forage per year.

“In early spring, you wouldn’t see the lucerne — just the fescue grass,” Ensor says. “In the fall, you’d see lots of plantain and lucerne. And grazing brome covers the ground between the plants. We don’t like to see bare ground. Bare ground means dust in the wool, and buyers don’t like that.”

One of Glenaan Station’s sheep dogs deftly herds Merino rams. As the station shrank in a land deal with the government, intensive management meant more work for the dogs

Establishing the new river flat stands represent a significant investment — the equivalent of $190 per acre. Fencing, liming, and seeding river bottom fields into a blend of alfalfa, plantain, cocksfoot, fescue, and prairie grass cost the equivalent of almost $550 per acre. Those are huge commitments in a market accustomed to relatively low-input pasture management­­­.

Paul Ensor has no doubt that the investment is paying off, though.

“We converted land that barely supported one animal per hectare. Now that supports five animals per hectare,” he points out as a flock mills in a circle beside the broad river.

The Ensors’ goal is to get eight years out of a mixed alfalfa stand before rotating the field back to cereal rye for a couple of years of rest. The couple uses the big spring growth to finish lambs and steer calves for market. Ewes and hoggets kept over the winter are nurtured with fodder beet and a turnip/cabbage hybrid called a swede.

Doing the math, the Ensors figure their net profit from better diet and aggressive breeding will yield about a 21 percent return on investment.

In the deep Rakaia Gorge, that’s a victory of quality over quantity.