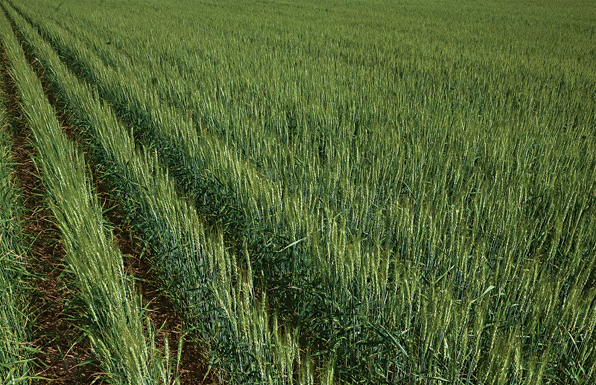 Relay cropping can turn back the hands of time where the growing season isn’t long enough to allow double-cropping. Giving soybeans a head start by planting them into a wheat crop — rather than following it — may not be new, but there are new reasons to consider it.

Researchers at Ohio State University have been finetuning this practice, dubbed Modified Relay Intercropping (MRI), for nearly two decades. “It’s allowed double-crop soybeans to move further north by adding four to six weeks to the growing season,” says Crawford County Extension coordinator Jason Hartschuh. “However, we’re also finding that even farmers who have time to grow double-crop soybeans behind wheat may want to consider MRI because it allows the use of longer maturity, potentially higher yielding soybean varieties.”

Wider wheat. Recent research in Ohio, Kentucky, and Indiana showing that wheat suffers only slight (2-5%) yield loss when grown in 15-inch rows is adding to interest in relay cropping. Growers can use a 15-inch soybean planter to seed wheat in the fall, then plant soybeans between wheat rows the following spring.

“Until a few years ago our research was with wheat planted in 10-inch rows,” says Hartschuh. “It took tramlines and modified equipment to minimize damage to the wheat when planting the beans. Also, the soybeans struggled for light in the heavy wheat canopy and often got very ‘leggy.’ To avoid this, growers often delayed planting until closer to wheat harvest, but that reduced soybean yields.”

“However, we’re now finding MRI works better with wheat in twin-rows or 15-inch rows. No-till planter units can squeeze down 15-inch rows to plant beans, and tractor tires fit without tramlines — especially with auto-steer systems. The lighter wheat canopy lets in more light so soybeans develop normally. Soybean yields have been 5-10 bushels per acre higher than in 10-inch wheat, and wheat yields have held up in wider rows.”

Crop rotation. Bucyrus, Ohio, far-mer Milton Underwood says relay cropping justifies wheat in his rotation. “We’ve done it for seven years, and we like the diversity and the summer income it provides,” he says.

Underwood plants 15-inch row wheat and soybeans using a split-row planter. “We plant the beans when wheat just starts to flower. Test plots show the traffic only causes yield loss of a couple bushels per acre.”

Crop diversity builds soil health, and that’s one benefit Holtwood, Pennsylvania, farmers Steve and David Groff see to relay cropping. “Our goal is to have live roots growing  whenever possible, and as wheat matures there are several weeks when that’s not the case. Relay cropping fills that gap and sets the stage for a good corn crop to follow,” says Steve.

The Groffs experimented last year by planting soybeans in wheat in 15-inch rows; they admit to being on the learning curve. “We planted a short-season variety and they got too tall — a longer-maturity variety would have worked better. Also, wheat straw is in high demand in our area so we’re  better off cutting low, baling the straw and coming back with a cover crop before corn,” explains Steve.

Other options. Wheat and soybeans aren’t the only crop combination to fit into relay cropping. Researchers at North Dakota State University and the USDA-ARS Lab in Morris, Minnesota, see potential in teaming soybeans with the oilseed crops camelina and field pennycress.

“Like winter wheat, camelina and pennycress are winter hardy, so they’re planted in the fall. The following spring they can serve as a cover crop or be taken to harvest for bioenergy production. Because they mature early, and because their crop canopies are thinner than wheat, they provide an opportunity for relay-cropped soybeans,” says USDA’s Russell Gesch.

“Most of our work is with camelina planted in twin-rows with 22-inch spacings where soybean rows are placed. We’re getting 80% of the yield of full season soybeans and have the oilseed crop in addition. The economics depends on the price of the latter, but it has been favorable,” he adds.

A Farm Of Her Own

Lydia Ryall calls her own shots on her farm.