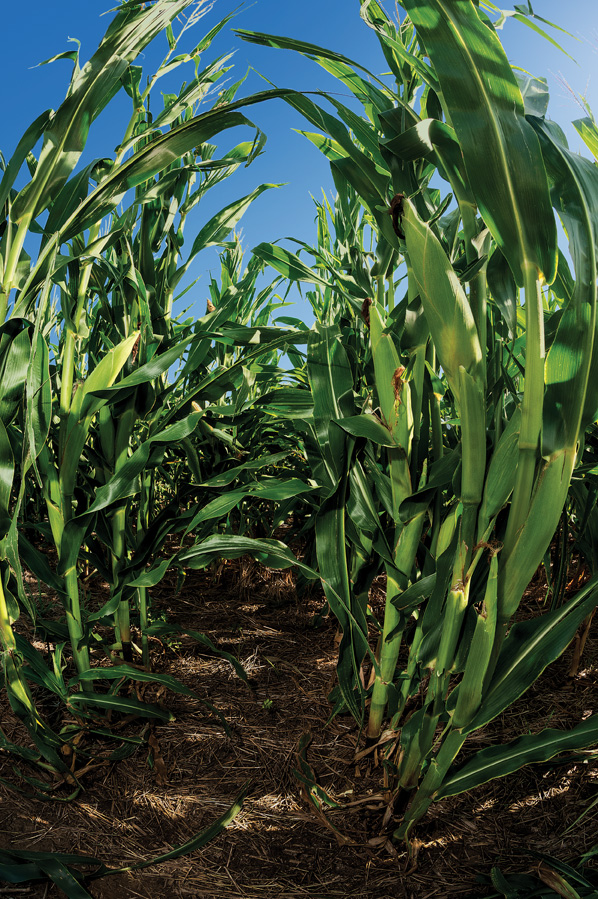 Nitrogen use is entering an era where growth models, canopy sensors, and aerial imaging are allowing in-season adjustments to preseason applications. Such tools are helping farmers fine-tune nitrogen rates to address environmental concerns and adapt to economic realities.

Scharf cites recent surveys in Corn Belt states showing 35 to 50% of corn growers are now using in-season nitrogen application compared to less than 5% a few years ago. “Generally, we see a 20 bushel per acre yield advantage if nitrogen is applied in April and May over fall application and another 10 bushels per acre if it’s applied in June and July,” he says.

Oklahoma State University soil fertility specialist Brian Arnall believes corn growers could learn from wheat growers about the value of in-season nitrogen use. “There are nearly 600,000 acres of wheat in Oklahoma where growers use nitrogen-rich strips and a $500 hand-held crop canopy sensor to manage nitrogen. Applying a low rate of nitrogen prior to planting, and a higher rate to the strip, allows them to monitor any color difference with the sensor. That tool then uses a response algorithm to recommended any needed nitrogen.”

“This allows the crop to tell you how much nitrogen the soil is contributing through mineralization. It’s saved some growers several hundred thousand dollars in the past decade.”

Admittedly, this approach is more challenging in corn because the window for in-season application is narrower. However, Scharf points out that high-clearance applicators are becoming increasingly available, and his studies show that even 7-foot tall corn will respond to needed nitrogen.

Applying nitrogen in-season is a simpler task under irrigation, and researchers at the University of Nebraska and the Nebraska On-Farm Research Network have launched a program to show farmers the benefits. Last season, their Project SENSE (Sensors for Efficient Nitrogen use and Stewardship of the Environment) demonstrated use of an applicator equipped with crop canopy sensors for 15 cooperating growers.

The cost of this technology [$15,000 or more] and the inability to simply try it out has limited its adoption,” says soil scientist Richard Ferguson. “This project is intended to show farmers the benefits.”

Ferguson says early results indicated farmers could have saved 30-40 pounds of nitrogen per acre with no loss in yield. “Our ability to optimize yields and improve nitrogen use efficiency is maxed out at about 1.1 bushels of corn per pound of nitrogen with current methods. We think this new approach to in-season application can improve that to about 1.4 bushels.”