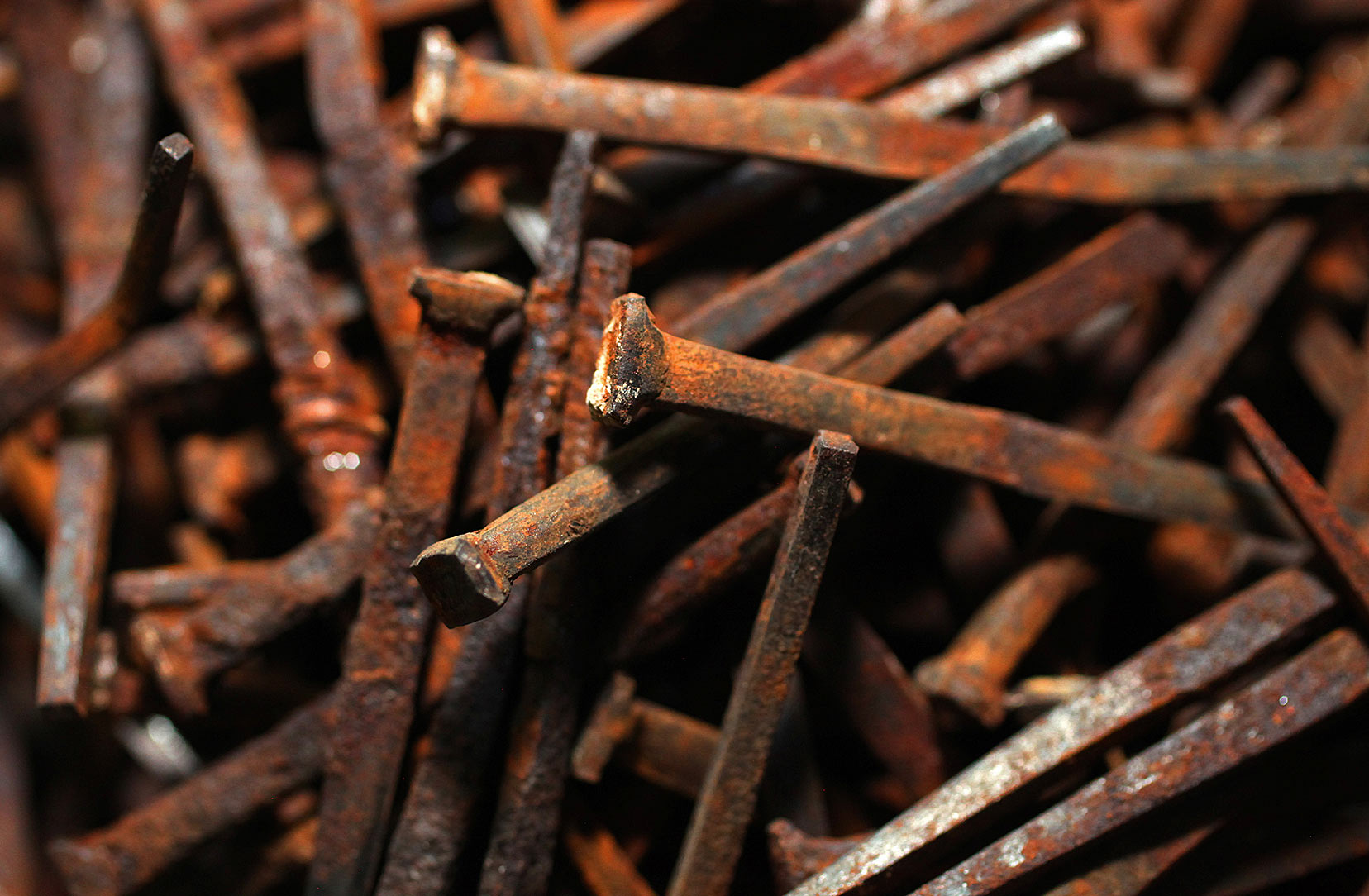 Quebec couple restores and lives in a 176-year-old home.

Quebec couple restores and lives in a 176-year-old home.

Beauty is in the eye of the beholder and not everyone can see the potential in an old ruin. The Ewans house, built in 1838, was on its last legs the first time Lucie and Denis Archambault saw the once-grand stone structure outside of L’Epiphanie, Quebec. The two-foot thick stone walls were still standing and the mansard-style tin roof was more or less intact, but that was about it. The foundation was shot, the mortar was crumbling, and the floors were rotted away. Twenty years of love and uncounted hours of labor later, the heritage home has regained much of its old luster.

Living the dream. The Archambaults yearned to live in a country home. The fieldstone house located on a quiet country road just beyond Montreal’s northern suburbs was just what Lucie, an avid gardener and a landscape artist, was looking for. It was far enough out from the city to have rural charm but close enough to conveniently access services.

The house, built on a knoll, came with a barn, several outbuildings, and about 150 acres of land, The Archambaults rent out most of it to local area farmers, but Lucie used the area surrounding their home to showcase her landscaping skills. It’s now the centerpiece of a vast 250,000 square foot garden that features a wide range of fruit-bearing trees and shrubs, including pears, apples, cherries, blueberry and raspberry bushes, and quinces.

Restoring an old stone house, built a few months after Queen Victoria ascended to the British throne, isn’t for the faint of heart. Even though the Archambaults had some experience (they had restored an 1806 French style stone house earlier on), the amount of work involved to rebuild the Mansard-style home came as a big surprise for them.

“This house was more stately, it had more details,” says Simon Archambault, their son who worked with them as they were doing the project. “That made it far more complex to work on.”

“When I saw the house I had a romantic vision of what it would look like when the renovations were all done and it was looking great,” says Lucie Archambault of the start. “Of course, you cannot envision the scope of all the work that’s required; you are blind to all that. It’s a process. Little by little, you realize what you’ve gotten yourself into.”

Lucie Archambault turned the knoll around the home into a vast 250,000 square foot garden.

Urgent repairs. The building had stood the test of time, but it had sat empty for some time and hadn’t been properly maintained. They started with the most urgent repairs. The foundation under one entire corner of the house was in such sad shape that water was seeping into the cellar and leaking into the side of one of the chimneys.

“Gaps in the mortar were so big that Simon could fit his entire arm in one of the walls,” says Lucie Archambault. The chimney was in such bad shape it had to be practically rebuilt to restore it. The mortar had disintegrated to the point there was nothing left holding the stones together.

“It was a big job,” says Simon. “We had to take out all the stones and start from scratch. There was one missing near the top; we had to have it cut and haul it all the way up the mansard roof. It was high too. We had five sections of scaffolding set up to work on the windows in the attic.”

Restoring all the architectural elements can be daunting. The decision to remain faithful to the original architect’s intentions raised the bar higher still. Since the home had been extensively remodeled several times over its long lifespan, they had to develop detective-like skills to try to ferret out what the original designs might have been.

You can’t just go down to Home Depot and buy something that will fit, Simon says. Nothing is the standard size, nothing is straight, and if you happen to run across a right angle, it is purely coincidental. You can’t work with a level because nothing is level.

Time and again they had to hunt down the right materials in order to retain the home’s distinctive character. It took the renovations to a whole new level of difficulty, but they didn’t want to introduce new elements that could destroy its look.

“We had a hard time finding wood to redo the flooring on the second floor,” Lucie says. “We needed planks that were 17 feet long, and we couldn’t find anything longer than 16 feet so we wound up having to get them custom made.”

Finding craftsmen to do the jobs they couldn’t do themselves wasn’t easy. For example, they searched to find a blacksmith who could recreate the missing hinges and window locks that they needed to restore the house’s 26 windows.

“It took a long time to find one because we didn’t want just any blacksmith,” Lucie says. “We wanted one who could make something that was similar to what was there before. For us settling on hardware that was close enough was out of the question; it would compromise the integrity of the house.”

One of the things they discovered was the house had been built in stages. The room that is now the kitchen was probably the entire first floor of the original house. The rest of the home was added onto the structure later as the family grew.

The restored kitchen is now one of the home’s showpieces. Just stepping into the room is enough to transport visitors back in time.

Kitchens as we know them today didn’t exist at that time, explains Simon. “When we started working on the room we discovered a beautiful recessed armoire and a giant open fireplace that had probably been used for cooking behind a wall built by subsequent owners. Restoring the fireplace took hours of work. We used a lime wash to clean all the soot off the stone masonry.”

They also found a sink and a hand-pump in the next room. Having indoor running water was quite the luxury for a home built in  that time period.

The old stone house was in ruins when the Archambaults first discovered it near L’Epiphanie, Quebec.

Authentic colors. The room also features a slate floor with an authentic red and yellow ochre with shades of blue-green color scheme. Installing it however required the addition of extra support beams to handle the extra weight. They decided to keep the trap door that led to the dirt basement where vegetables were stored.

After getting the house back into a livable condition, the Archambaults started furnishing the interior with as many period appliances and pieces of furniture they could find. A mint, antique Chapleau cooking range, dating back to 1911, now stands adjacent to the fireplace. It features a landscape scene painted on its ceramic backsplash. But it’s just one of the many antique collectibles, heirlooms, and signature pieces found throughout the house.

Lucie was able to source many of these by raiding her father’s attic where many had been stored away and forgotten. Others came from an antique dealer she knew who specialized in 18th and 19th century furnishings. Many have interesting whimsical stories and add authenticity to the decor.

Life-long passion. Lucie credits her grandmother for her love of old houses and antiques. She still treasures the old school desk gifted to her when she was eleven years old. Her favorite course in high school was a course in Quebec history. However it was helping her husband Denis complete a paper on old homesteads for an undergrad industrial design class for his degree at University of Montreal, that really fueled a life-long passion to restore old homes.

If you decide to take on a restoration project, expect to have many interesting adventures with plumbing, electricity, and water damage, Lucie says. The Archambaults’ most memorable disasters include a chimney fire in the middle of January and having Simon’s bedroom window fall out one cold winter night.

“We sure froze during the first few years,” says Lucie. The many gaps and cracks in the masonry walls that let the cold air in convinced the family to compromise a little on historical authenticity and used expanding polyurethane spray foam to increase their comfort and reduce heating bills.

The Archambaults have poured a lot of blood, sweat, tears, and money into restoring their character home. But they feel that living in one is a unique experience. It has so much character that it gives them and their guests a connection to the past.

There is always more restoration work to be done on the house, but for now the Archambaults have been pulled off it to work on a new project. The nearby city of Repentigny is expanding their water treatment facility and plans to build it on the site where an old log home, built around 1800 by one of Lucie’s ancestors, now stands. The city was willing to let them have the house as long as they had it off the property by May 2016. So Simon and Lucie are in the process of dismantling it and rebuilding it to its original specifications on their property near L’Epiphanie to use as a workshop.

“My family were contractors and built the house themselves,” Lucie says. “So there were no construction permits or anything like that to exactly date the house. But as we are taking it apart to get it ready to move, we can estimate its age by how things were done. The bigger the wood pieces the older it is. You can tell by the building materials and the different nails were used that the house had a major renovation done to it around 1880. We found newspaper glued to the walls dated 1887.”

Their plan is to have the house look as close as possible to what it did when it was first built. Achieving this degree of authenticity requires them doing a lot of detective work as they strip it for moving. For instance, finding pieces of the original wall plaster provided clues to the room’s original colors.

Archambault says these old log homes built along the river really reflect the history and life of Quebec’s first settlers. Perhaps the site where the house sits could even date back to the earliest days of the French-Canadian fur trade. For Lucie, it’s recovering this connection to the past that makes her hobby so exciting.

“A project like this is a process of discovery,” explains Lucie. “We learn their craftsmanship and see how things were done. Plus doing it all ourselves gives us a great feeling of accomplishment.”

"Saffron is more than just another pint-sized purple flower. It’s a link to the exotic East...".