Dine at Corner Pit BBQ near tiny Dellrose, Tennessee, in the central part of the state just a few miles from the Alabama line, and the beef on your plate could have originated in a pasture right down the road.

It’s part of the Pfeiffer family’s plan to market their own beef through their restaurant.

“You have to want it.”. Kristen and Bill Pfeiffer worked in marketing in the electronics industry. Wanting a more rural life, they bought 16 acres, adding more year by year. They now own 150 acres and farm 400 counting leased land. For 20 years, they grew and sold bedding plants. Then the old restaurant on the corner came up for sale. That’s when life changed for the Pfeiffers.

“We’ve had cattle since buying this place. What we learned about farming is that you have to want it really bad to make it work. We’ve had a lot thrown at us. Bedding plants became such a commodity that we lost that market. Corner Pit BBQ is one way to add value to our products,” Bill says.

It had been turning out barbecue since 1965, burning six times over the years. The Pfeiffers bought it in 2008 and, after considerable restoration, opened for business in 2009.

“It has been amazing. Never in a million years would I have thought that many folks would come here to eat. We get people from Nashville, Knoxville, Huntsville, all over, really, just to eat here. One guy came from Benton, Arkansas and got one of each meal, put it in all in cooler, and drove back home. I’m amazed at how far people will come to eat good barbecue. We owe a whole lot to the people who were here before us. They did a lot to build up a good reputation,” Kristen says. 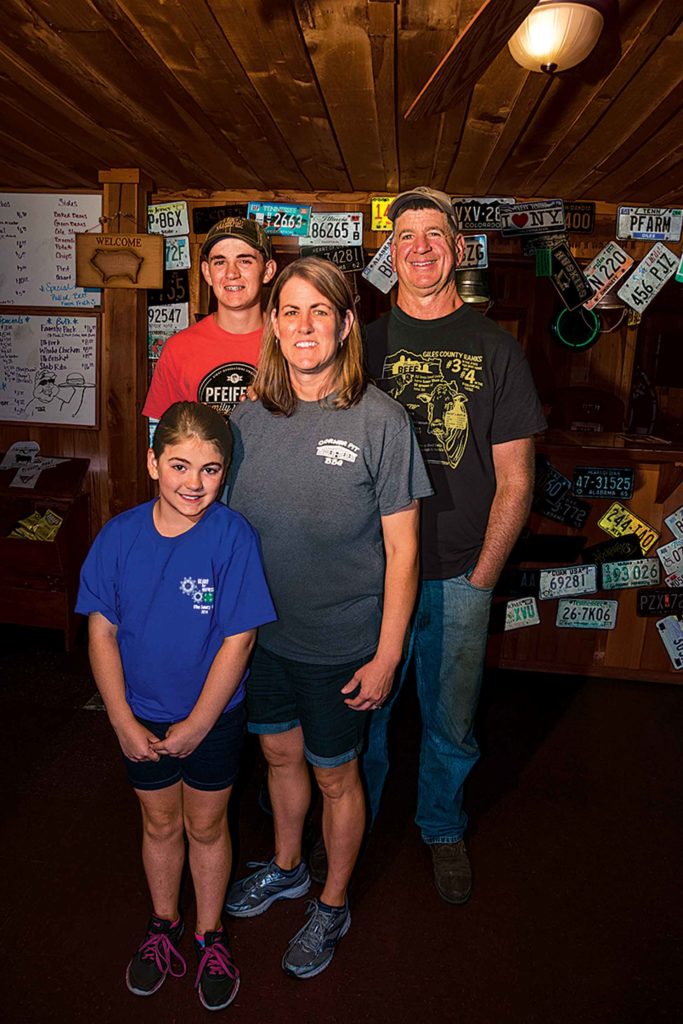 The farming Pfeiffer family in their folksy restaurant. They serve pork and chicken in addition to beef, and want to feature even more locally-grown food.

As you might expect, the Pfeiffers are a bit persnickety about their cattle. Not just any old cow will do. They have Low Line Angus cattle, which have high quality meat, Bill says, and will almost completely finish out on grass, with no hormones.

“We intensely graze them, moving from pasture to pasture, within about a mile of the restaurant,” Bill says.

“We really manage that grass. That’s the main thing. We have native grasses, Johnson grass, crabgrass. At this point we don’t market the majority of our beef through the restaurant. Our goal is to eventually sell to other restaurants, as well. We’re building things gradually over time. Plus, we’re building our direct sales. We want to stop marketing through the stockyard because we never know what the check will be. With direct sales and through the restaurant, we know what it’ll be.”

A lot of their direct sales to individuals comes via the restaurant. Once people try it, getting them on board to buy quarters and halves regularly is fairly easy.

The Low Line Angus give the Pfeiffers a little extra uniqueness. They like them because they’re easy to handle and adapt well to most conditions. Mature cows come in at about 40 inches in height and weigh around 800 pounds. They’re long-lived, generally healthy, good foragers, and finish well on minimal grain, Bill says. That’s important. He wants to keep them on grass as long as possible.

“They originated in an Australian project done by the government there. They were looking for high-quality meat, good temperament, and good efficiency on grass. They are smaller than our regular Angus but they do not have the dwarfism gene,” he says.

The Pfeiffers expect their business to continue evolving. They would like to start growing vegetables to put even more local flavor into the Corner Pit BBQ meals. That will be a project for a son and daughter. They’d also like to buy more vegetables from local farmers, providing another market.

Tradition helps. But they also hope to continue building on the long-term traditions that keep drawing people back here…traditions like the original sauce recipe.

“The original sauce has been served here 50 years,” Kristen says. “It’s vinegar based and like no other sauce I’ve ever had. We used to come here and trade bedding plants for jars of sauce. Now we’re doing very well with the sauce. If we ever do make enough money to retire, it’ll be on the sauce.”

The restaurant is open Friday, Saturday and Sunday year-round, until the last customer leaves. “One couple has been coming since 1966, when they were college students. They call and tell us if for some reason they’re not going to be here,” Kristen says.

The Case For A Raindrop Audit

Farmer and editor Dean Houghton on the case for a "comprehensive water management plan."