Big challenges don’t faze Sarah Bellos. Even though synthetic dyes completely dominate the fashion industry, that didn’t make sense to her at a time when more consumers want natural products. Wouldn’t some consumers, at least, be willing to pay a bit extra for products dyed with natural indigo?

Very little natural farm-grown indigo exists in the U.S., however, presenting a chicken-and-egg dilemma. “I decided that, with my background in agriculture and sustainable business, I could work out how to do this. I could see a built-up demand for bio-based dyes but the industry depends on synthetic dyes. The system is broke and I want to fix it,” says Bellos, who graduated from Cornell University with an agriculture degree in 2004.

In July, Cone announced it would be making Natural Indigo Selvage Denim at its historic White Oak mill in Greensboro, N.C. “This is one of the most exciting developments. As far as we know, this is the first time that natural indigo has been used in scalable production in the United States in over 100 years,” Kara Nicholas, Cone’s Vice President Product Development and Marketing, said in announcing the move. 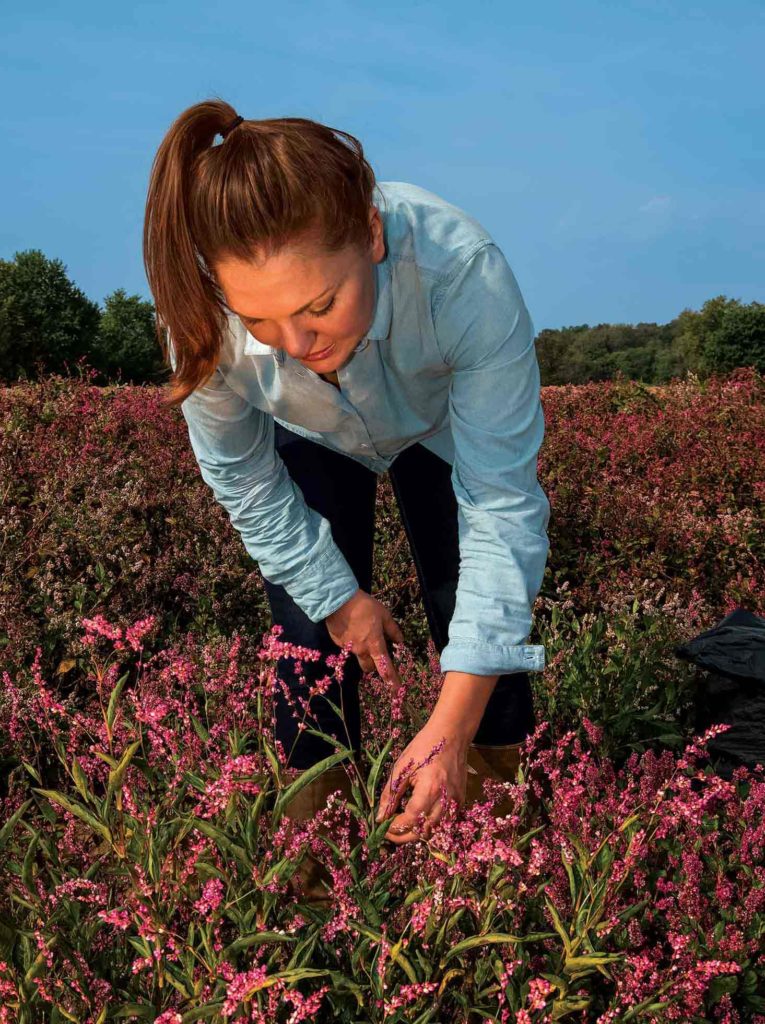 Big commitment. Cone now has exclusive rights to Stony Creek Colors’ entire indigo crop for several years. “We are charting a course to develop dyes that integrate seamlessly into existing production processes. By blending the wisdom of nature with mindful innovation, we are able to create vibrant, high quality bio-based dyes. Cone is known for denim innovation. Their White Oak brand is a perfect fit for the launch of natural indigo denims,” Bellos says.

About 30% of the denim market is premium and luxury, Bellos says, providing plenty of room for growth. Her goal is to produce 17,000 acres of indigo within five years. Getting there from the small fields on four farms last year will be her next challenge.

Trying it. George Marks and Jay Head grew two acres of indigo for Bellos last year on their diverse Clarksville, Tennessee farm. The venture seemed to work out well.

“I thought we needed an alternative to tobacco, and I’m always looking for something new. We grew the indigo more out of curiosity than anything, to see if it’ll work,” Marks says.

“We can grow the indigo just fine. Harvesting is the logistical barrier. Growing it was no problem. It didn’t have any insect or disease problems. There are no herbicides labelled for indigo so broadleaf weeds could be a problem. If we concentrate it on row crop land where we’re already controlling the weeds well, we can probably handle that. But harvesting is still a work in progress. We have to learn to do a better job of that,” Head says.

Bellos contracted for 16 acres of indigo production in 2015 and aimed for 45 this year. Getting to 17,000 acres will require convincing a lot of farmers indigo will be profitable.

Alternative. “I think a lot of former tobacco farmers could try an alternative like indigo. We’re refining agronomic techniques, working out things like seeding rates and row spacing. The indigo George and Jay grew was 15,000 plants per acre. The indigo I personally grew was 30,000. We’re figuring out what’s best. If it’s concentrated in the tobacco region, it could be easier to get farmers to try it because it’s produced much like tobacco. It’s seeded in float trays just like tobacco, ready to transplant,” she says.

“Whatever we can do to keep more small and midsize farms profitable and expand our indigo market at the same time is good. Selling enough to increase efficiency is vital. For us, just getting in a niche that keeps everyone profitable is very important.”m

Drought-tolerant corn hybrids are being put to the test.