Luxury handbags are big business. After a pink, crocodile-skin, Hermès Birkin bag with gold and diamond hardware sold for US$233,000 at a Christie’s auction in Hong Kong in July 2015, Fortune magazine ran an article that explored whether it was a good investment. The article concluded that it might be.

That’s good news for Angela and Peter Freeman, owners of Hartley’s Crocodile Adventures near Cairns in Queensland, one of fourteen crocodile farms in Australia. The country’s saltwater crocodile skins are highly prized by fashion houses like Louis Vuitton and Hermès for their quality. There’s a ready market for every flawless skin the Freemans can produce.

Scarce supply. The cheapest Birkin bag sells for US$12,000, but one made from flawless Australian saltwater crocodile skins, and outfitted with diamond and gold hardware, sells for over US$200,000. Part of their mystique is that even if you can afford one, you can’t just pop into a store and buy one. They’re in such limited supply that the fashion houses only offer them to their best customers.

Owning one is a sign to your peers that you’ve arrived! It’s such a strong status symbol that author Wednesday Martin devoted 30 pages of her controversial best selling 2015 autobiography, “Primates of Park Avenue: A Memoir,” to her efforts to procure one.

Works of art. “People always go on about how much these high-end luxury bags sell for, but they really are true works of art,” Freemans says. “It’s like standing in front of a Rembrandt or a Monet painting and saying it’s not worth what people will pay for them. In reality you are paying for the hundreds of years of accumulated skill the fashion houses’ artisans put into the product. Some are third or fourth generation who were trained by their grandparents.” 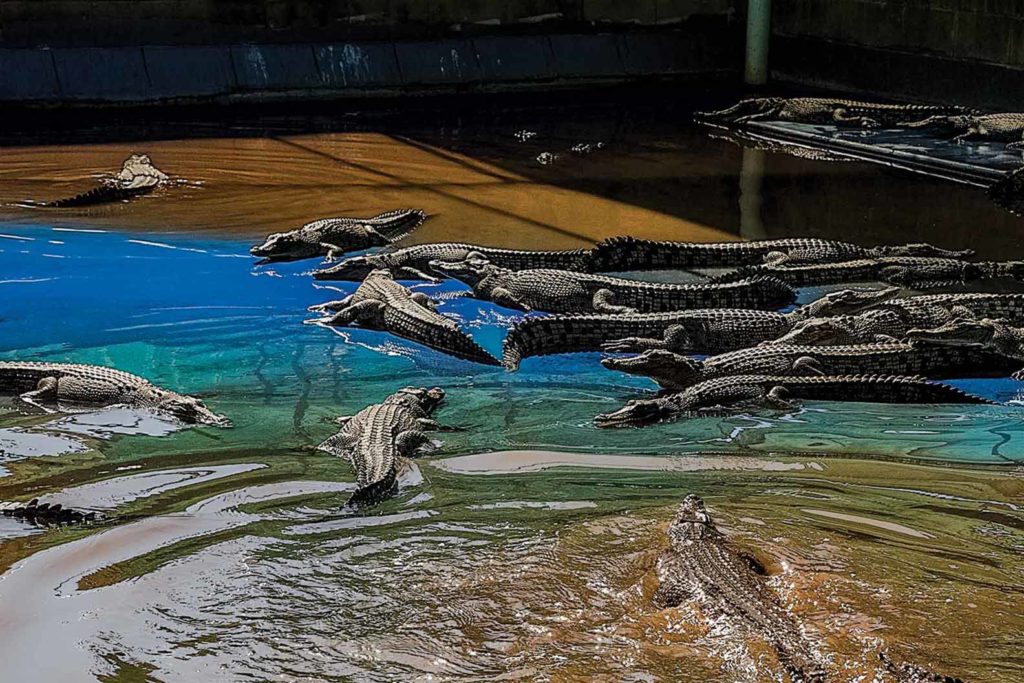 The Freemans feed their crocodiles a specially concocted low-fat blend of kangaroo and chicken meat.

The Freemans harvest about 1,000 saltwater crocodile skins annually; animals are hatched from eggs laid by their breeding stock. But they have between 3,000 and 4,000 animals on their premises at any one time. Animals are raised in as humane and as environmentally sustainable way as possible. It’s important for both their operation and for the industry.

Closer scrutiny. “We are under even more scrutiny than most because we are open to the public,” says Freeman. “We’re taking people around and explaining what we are doing every day. It’s the only wildlife park in Australia that borders a World Heritage forest so we’ve an obligation not to harm and where possible improve this fragile landscape.

“Animal ethics are treated very seriously here,” Freeman says. “We adhere to a strict code of practice and the industry here is monitored by Queensland’s regulatory bodies.”

Fashion houses need two premium skins for each one of their high-end luxury bags, says Freeman. Every crocodile has a unique scale pattern.

Premium skins need to have a very uniform pattern throughout and a minimal number of scales with an unusual shape. They can‘t have any damage that cannot be remedied through the tanning process.

“Representatives from the fashion houses buy directly from us,” Freeman says. “Buyers know exactly what to look for. They decide whether or not to buy a skin in less than a minute. They examine the chest area that’s used to make the handbags for any flaws or blemishes.”

They check for pitting on the scales caused by bacteria. Other blemishes could be major scratches, teeth marks from other crocodiles and stretch marks from growing too fast.

“Perfect skins can fetch between $700 and $1000 dollars,” says Freeman. “Their value drops substantially if an essential quadrant is damaged.”

There is more to harvest from crocodiles than just their pelts though, Freeman says. For example they grind crocodile meat to make sausages and burgers. They also serve it in various entrée dishes at their restaurant overlooking Hartley’s Lagoon. Carcasses are rendered into organic fertilizer while crocodile heads and feet are sold as souvenirs. Their goal is to have almost nothing go to waste; they even sell crocodile manure, trademarked as “Croc Crap” in little sachets in their gift shop.

Drought-tolerant corn hybrids are being put to the test.