When folks head out on vacation, tops on their list of places to visit is a large-scale, modern commercial sow farm. Right? “Sure,” you say. “When pigs fly.”

Well, there is a place in Indiana, about halfway between Indianapolis and Chicago, just off I-65, where — figuratively speaking — pigs do fly.

The place is called the Pig Adventure at Fair Oaks Farms. It joins the popular Dairy Adventure, an “edu-tainment” venue that introduces visitors to the world of large-scale commercial dairy production.

“We hope to educate consumers about the pork industry the way Fair Oaks has done with its Dairy Adventure,” says Malcolm DeKryger. He’s president of Belstra Milling Co., in nearby DeMotte, Indiana. Belstra Milling partnered with DeKryger and a few other families in the community to build Legacy Farms, a 2,800-sow farm that was designed from the start to also serve as a tourist destination.

Learn the ropes. The adventure begins in the $4.5 million Pork Education Center located adjacent to the popular dairy birthing barn at the Fair Oaks Farms headquarters. Built with contributions from industry, the center showcases a broad brush of pig and pork education, from medical uses for pigs to recipes and cuts of meat. There are areas outlining pork use around the world and innovations in the science behind pig production. 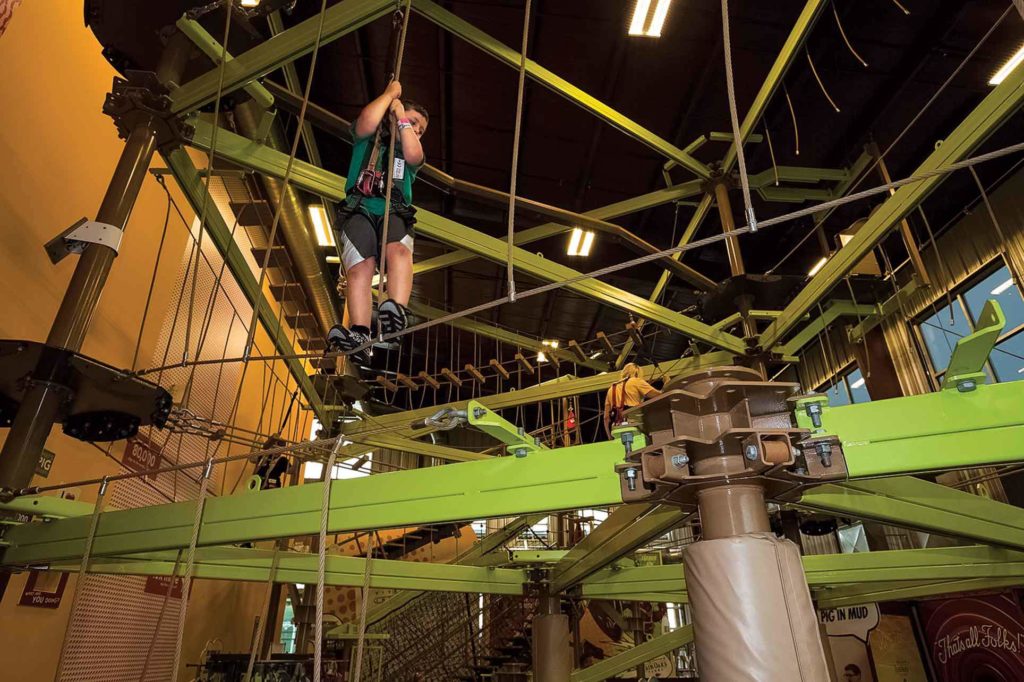 A sky trail ropes course provides an aerial challenge for kids of all ages, and reveals pork “factoids” as climbers reach new heights.

The education center also is where kids leave the ground to follow a sky trail ropes course. This aerial obstacle course, designed for two different age levels, reveals pig “factoids” as visitors reach higher levels. Kids also can play in a custom-built treehouse designed by the team at Animal Planet’s Redwood Kings, or explore various other pig- and pork-related attractions.

There’s another key role for the 7,000-square-foot education center. It serves as the boarding area for The Pig Adventure bus tours that deliver visitors to the working pig farm located about two miles away.

Gilt trip. They call this ride a “gilt trip,” just one of many puns based on porcine nomenclature that fill the narration on this five-minute journey. Visitors soon learn the vital role that biosecurity plays in modern pig production. The bus rolls into an enclosed, secure unloading area, and the passengers must pass through a “virtual shower” before they enter the production area. The guests never get wet, but they are reminded that the workers in these buildings do shower in and shower out to protect pigs from inadvertent exposure to pathogens.

In order to protect swine health, visitors never come into contact with the animals. The people move up to an elevated mezzanine level to view the pigs. There are three separate wings, brightly lighted and resembling an airport concourse, that offer skybox viewing of the breeding/gestation barn, a gilt developer (showing pigs in the grow-finish stages), and the farrowing area, where 250 newborn piglets are delivered each day. It’s a reality show; farm employees simply do their jobs while the public watches. Pig Adventure guides are available in each area to explain to city folk what’s going on below.

A great story. While the Pig Adventure features the fun and whimsical, it also delivers serious messages. “We think agriculture has a great story to tell,” says Gary Corbett, Fair Oaks Farms’ chief executive. “Those of us in modern agriculture protect the environment and care for our animals while providing the highest quality food for consumers.”

The Pig Adventure explains the important role that pig production plays in providing manure nutrients that feed crops on Corn Belt farms. Fair Oaks Farms also turns its dairy and swine manure into energy. Anaerobic digesters provide biogas that fuels not only its barns and facilities but also its fleet of milk delivery tanker trucks.

Baby barn. Like the Dairy Adventure, the birth of babies steals the show at the Pig Adventure. “Kids are really drawn by the process of watching a natural birth,” DeKryger says. “They get so involved that they press up against the glass to watch. We have a full-time window washer who scrubs the noseprints and the handprints off the windows. We consider it a good sign when we have to wash the windows, because we know the kids are really getting excited.” 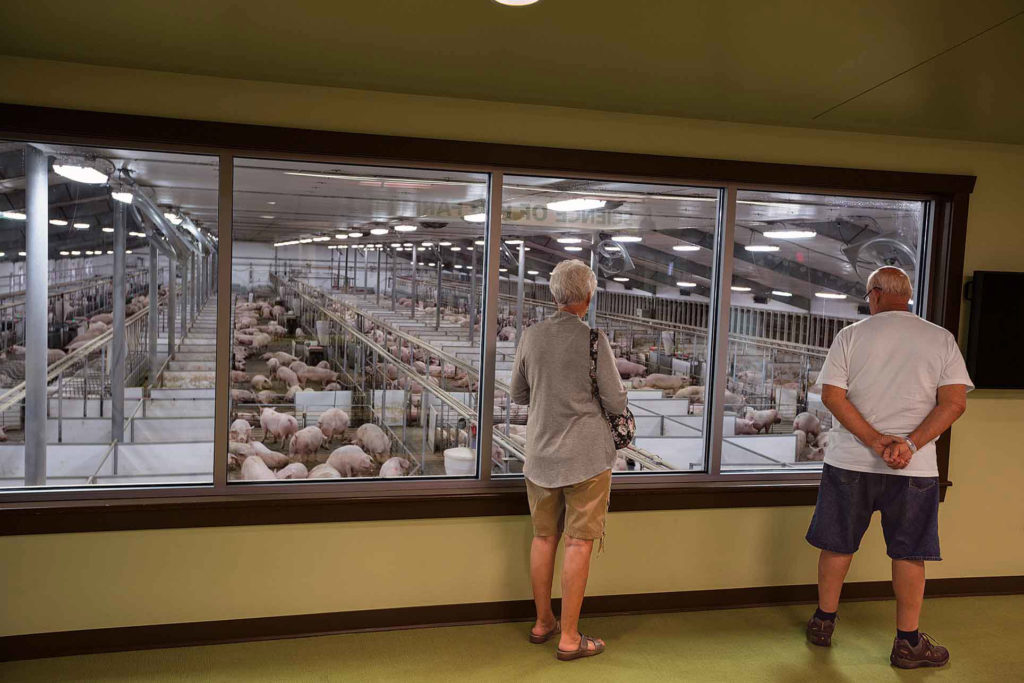 Getting a skybox view, visitors to the Pig Adventure take advantage of 25,000 square feet of observation area to view animal areas.

But it isn’t just kids who learn about modern pork production. “Only about one-third of our visitors are school groups,” DeKryger points out. “Our visitors cover the entire gamut from young to old. We also have a number of international visitors, so we are touching the world, as well.”

Reaching out. The unusual match of all-out commercial pig production with Disneyland-like tourism seems to be working. “Many people wondered if a commercial sow farm could remain healthy and productive with so many visitors,” DeKryger says. “We now feel comfortable saying ‘yes,’ as Legacy Farms is operating at a high level. Production has been 30 pigs per sow per year or more.”

The other great unknown was how the public would react to a high-volume commercial facility — not exactly a petting zoo. More than 150,000 visitors have come through the farm since it opened in mid-2013, and there has been little controversy. “There are some people who come here with a bias,” DeKryger admits. “Sometimes we have to agree to disagree.”

The biggest lesson has been the importance of reaching out. “This is an excellent exercise in how to transcend the gap between the professional producer and the naive consumer,” DeKryger says. “This will be an important part of our job from now on.”