Dairy farmers spend a lot of effort optimizing rations, hoping to ensure that what goes into their cows will help them be healthy and productive. But there’s a lot to learn from what comes out the other end, too.

In fact, taking note of the condition and content of a cow’s manure is a quick, effective way to check her health and ensure that she is getting the full value of her ration. The texture of a fresh cow pat can provide strong clues on how her rumen is working, whether food is passing through her system too quickly, and whether she is suffering from acidosis.

“You can pick up all three scores at the same time,” he points out. “If you’re going to be walking the cows for body condition scores, why not?”

In an online paper, Manureology 101, Hutjens outlines a five-level manure scoring system developed at Michigan State University. The ideal score for a fresh cow pie is 3, he says — a pat that plops when it hits a concrete floor, contains few particles of grain or fiber, stands about an inch and a half high, and forms several concentric rings with a dimple in the middle, much like a pile of shaving cream.

Score 1 has the consistency of pea soup, and may leave the cow in an arc. Too much protein, starch, or mineral can be the cause. So can a lack of fiber, or a pathogen causing diarrhea.

Score 2 is runny and splatters when it hits the ground or floor. It measures less than an inch in height, and could signal a need for more fiber. It is also common among cows on rich pasture.

Score 3 is ideal for lactating cows.

Score 4 stacks up over two inches high and is thick-textured. It generally reflects a shortage of protein, which is why it is common in older heifers or dry cows that are fed a diet of lower-quality forage.

Score 5 is dry and forms balls. A straw-based diet or dehydration can cause this effect. So can digestive blockage, so use this score to prompt further investigation.

Hutjens suggests thinking about scores in terms of individual animals and the herd as a whole. If the overall herd score is around a 3 but a group of cows is scoring a 2, are they sick? Could they be sorting their ration?

Wasted grain. Look closely at a cow pie. Pieces of grain in the manure indicate that the cow has passed the most valuable part of her feed before getting the full benefit from it.

Alejandra Vergara, a veterinarian with Alltech, coaches farmers in New Zealand’s Waikato region on manure inspection. She examines manure on the ground, then washes samples through a stack of three screens of varying mesh size to see what made it through the cow undigested.

“If well-ground grain is still seen undigested inside the screen, you are feeding energy, but a big part of that energy has in fact gone straight through the rumen,” she says.

That could steer changes in feeding.

Hutjens points out that starchy grains in the manure can be kernels that are too hard to digest — for instance, in mature silage — and may signal a need for a finer grind. 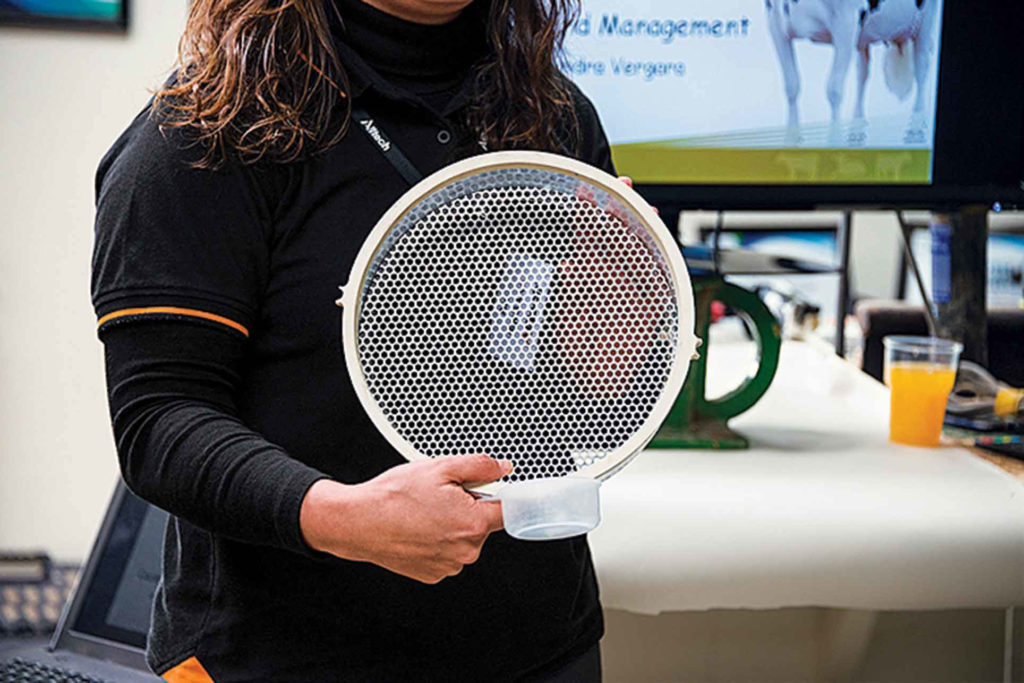 Washing manure through screens can show you what your cows aren’t digesting.

Or they can indicate that the feed is passing too rapidly through the digestive system. Feeding forage particles more than half an inch long creates a rumen mat, which slows the passage of grain and encourages more thorough digestion of starch in the rumen. There it is converted to volatile fatty acids, which fuel milk production.

Cud chewing. “If the rumen mat is there, it should increase cud chewing, too,” says Hutjens. “That stimulates sodium bicarbonate production in the saliva, which affects rumen pH.”

The step beyond observing grain particles in the manure or in a screen is sending a manure sample to a testing lab for a fecal starch analysis. An empirical number can be a useful measure of success as you analyze the effects of changes in your ration.

“If a dairy farmer can reduce total fecal starch from 7 percent to 6 percent, we would anticipate an increase of 0.66 pounds of milk per day from the energy recovered from fecal starch,” Hutjens says. “If fecal starch increases, we lose 0.66 pounds.”

If fecal starch tops 5 percent, quarterly analysis could pay off, he says.