In the second of our three-part series, The Furrow looks at how three ranches survive in the “House of the Sun.”

It’s a Thursday morning in April, and Haleakala Ranch Manager Greg Friel, his son Cody, and his grandson Eli are on horseback driving cattle to a new pasture near the town of Makawao, Maui in Hawaii. Above them, rich green fields and native forests rise almost 8,000 feet toward Haleakala Volcano’s 10,000-foot-high crater. Below them, the volcano’s lower slopes spread 2,000 feet down to the ocean. The location could be a Hollywood movie backdrop, but it’s not; it’s just a normal background at Maui’s oldest family-owned cattle operation.

The 29,000-acre Haleakala Ranch has appeared often enough in print media and as backdrops in TV ads that its scenery may be familiar even to people who haven’t visited Hawaii. Many Maui tourists visit ranch property as part of their stay: there are zipline rides, a lavender farm and a protea farm, run by lessees, as well as horseback rides. The ranch once included a place that most everyone on the island goes to at least once, the Haleakala National Park, which surrounds the volcano’s crater. The land was swapped in 1927 with the Territory of Hawaii in exchange for agricultural lands elsewhere on the island.

Sensitive to its role in Maui’s history, managers of the for-profit enterprise strike a fine balance between tradition and innovation.

Cattle for the King: Haleakala Ranch was incorporated 1888, but cattle had been present on the islands for 95 years by then. In 1793 six cows and a bull had arrived by ship as a gift from British Captain James Vancouver to King Kamehameha I. The animals were descendants of Andalusian cattle that had been imported to the New World from Spain 270 years earlier. During the next few decades the cattle multiplied and ran wild, destroying property and becoming a nuisance. In 1832, King Kamehameha III brought in Mexican vaqueros from California to show the locals how to herd the animals on horseback. The vaqueros referred to themselves as Espaniolo (meaning “Spanish”), and the Hawaiian cowboys eventually called themselves an iteration of that word, Paniolo. Adapting their methods to the tropical resources and terrain, they developed specific traditions that survive today. 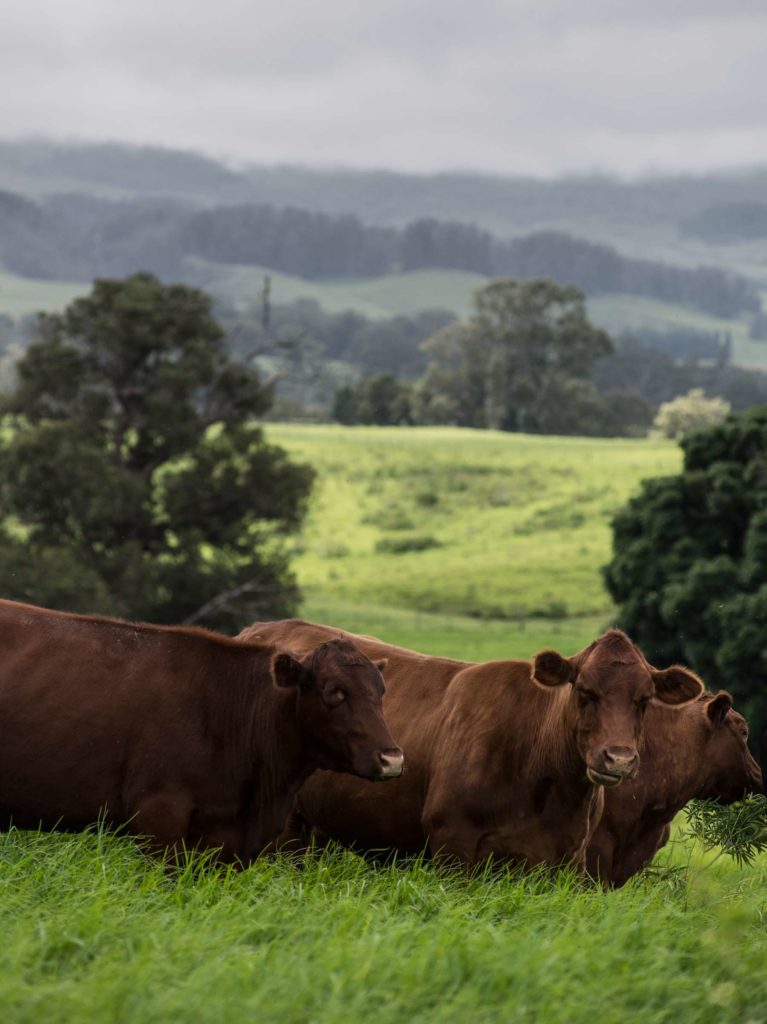 Ranching on private property in Hawaii didn’t come about until the mid-19th century. Before then, island resources were shared according to a communal land tenure program that divided land into pie shapes extending from crater to ocean. In 1848, that program was suspended in favor of a private property system that made agricultural land available for sale. Early owners of Haleakala Ranch were the grandsons of Christian missionaries who came to the island 18th century. Today the same family runs the ranch in the form of a family corporation of more than 110 members.

Ranchers bolstered the original Andalusian stock with imported Aberdeen Angus and Ayrshire breeds, and later Holsteins and Herefords, according to the writer John Harrison, who explored the ranch’s history in his book “Haleakala Ranch,” published for the ranch’s 125th anniversary in 2013. “We’ve been breeding black and red angus, picking them by body type, looking at moderate framed animals which means they don’t get very tall,” Friel says. “We want them to be easy fleshing — not animals that take a lot of input to keep them in good condition.”

Friel was hired by the Baldwins as ranch manager in 1994. He had previously managed another large ranch, Hana Ranch, on the other side of the island. Friel filled big shoes, not the least of which belonged to a legendary manager of nearly 80 years earlier, Louis von Tempsky. Harrison wrote about Tempsky: “Von worked tirelessly to improve the ranch’s stock — cattle, horse, pigs, and sheep…. His meticulous records, still held by the ranch, bear witness to the thousands of trees he planted across the ranch lands to improve the watershed. He experimented with planting different types of wood for a variety of uses: fence post, firewood, railroad ties, building lumber, and so on. He introduced different grasses to improve the feed and cultivated a wide range of diversified agricultural crops in the hopes of developing businesses for the ranch other than cattle. Among these endeavors were plantings of corn, vegetables, castor oil beans, pigeon peas, sisal and various grass crops. Another crop grown on the ranch during Von’s stewardship was pineapple— a business that was to benefit the economy of Maui and create thousands of jobs over subsequent decades.”

A century later, some of Friel’s concerns are similar, however ranching now is more costly and more complicated, even while new technology and information sharing make creative solutions more accessible than ever before.

Around the Slope: Like von Tempsky, Friel is an innovator. One of the challenges he faces — a surprise on a tropical island known for waterfalls and palm trees — is drought. The ranch properties wrap around different sides of the volcano, and slopes facing different directions get varying amounts of rain depending on their relationship to the northeast trade winds, which bring most of the island’s moisture. So parts of the ranch are extremely wet, and parts are arid. “There’s no average,” Friel says. “It depends on elevation, exposure, and winds. In a good year we’ll get 8 inches on the ranch above Kihei, while over in the forest we’ll get 60 inches. It’s very diverse within a span of ten miles.” 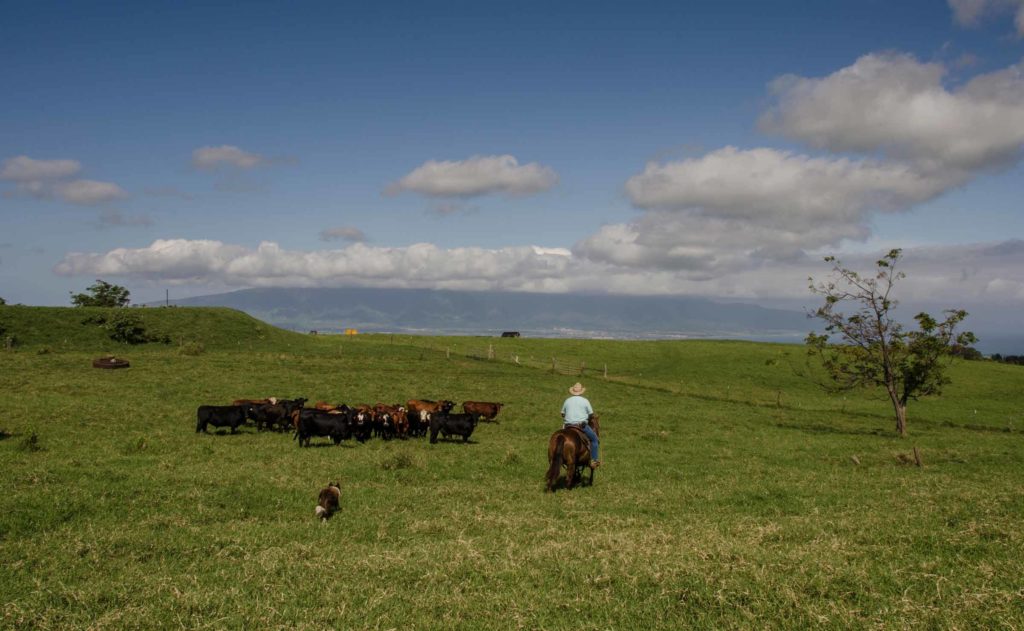 There have always been drought cycles, but a recent 6-year drought, followed by a wet year and then another dry year, was tough. With meteorologists suggesting the drier weather patterns will continue, Friel is working on drought proofing the ranch. “My best guess is to plan for it to be drier,” Friel says. “If it’s not drier we’re ahead of the game. If it is dryer, we’re prepared.”

Drought proofing includes adjusting the ongoing forage program. “We’re trying to introduce some new forages to help get more diversity for the animals, and for the health of the pastures —a mix of grasses, legumes, and some flowering plants,” Friel says. “The more variety you have, the more root system layers develop in the ground, making for a better balanced and healthier stand of forages. The dry weather makes it a little bit rough to get them established.”

The drought forced herd reductions, but the ranch is now restoring numbers to the capacity of 1,600. “We’re keeping the heifers back to build the numbers back up,” Friel says. “We are just a shade under 1,000 now.”

Diversifying product is also on the table. Haleakala has 1,800 goats, which are used for foliage management and as a meat source for some islanders. Sheep numbers are tied to what the island’s sole slaughterhouse can handle. “If we get the stability in the slaughterhouse, then we might go to 1,000. Right now we have less than 350,” Friel says. And there are chickens. The ranch has a new stock of layer hens, but it’s important to find a local byproduct to feed them so the ranch doesn’t have to pay costly prices for importing feed to the island. “In Hawaii we don’t have a lot of ag byproducts, so we keep investigating,” Friel says. “We would like to find something that would open us up to the production of meat birds instead of just layer hens.”

The drought’s impact on forage is magnifying another problem, the invasion of axis deer, which were brought to the island years ago for game hunting. Hunting has not kept the wandering ungulates in check, and now, like the cattle delivered by Captain Vancouver long ago, the deer are wreaking havoc, eating up the forage the ranch is managing so carefully for its own animals. “They’re having an impact on our fences and our grazing management,” Friel says. “When we rotate the cattle out of pastures, the cattle might not return to that area for 90 to 120 days, but we can’t control the deer from going in.” Ranchers are working with the State of Hawaii to find a solution, but so far there’s been no easy fix.

Tradition Passed Down Is Friel’s son Cody going to be a rancher like his dad? It’s likely, since he’s already in charge of one of the ranch’s quadrants. Are the grandkids headed that way? That remains to be seen, says Friel.

It’s highly likely that Paniolo traditions will continue. Although most of the Paniolo have traded cowboy hats for ball caps, they are still seen at brandings and elsewhere using original tools and techniques on horseback. Hawaii has attracted people of many different ethnic origins, including Japan, Portugal, and China. Cattle ranches like Haleakala are exciting places to witness an elegant blending of the old with the new.