Highway 37 ascends gradually from Kahului Airport on the north coast of Maui, Hawaii up the slopes of the island’s largest volcano, Haleakala. Un the region around 2,000 feet elevation, it enters communities where the island’s permanent population has chosen to settle – cooler areas removed from the island’s busy beaches and harbors. As it ventures southward toward the volcano’s more remote leeward side, the highway touches sites that mark stages of the island’s cultural history: the octagonal Holy Ghost Mission, built in 1894-95 for Portuguese sugar plantation workers; Grandma’s Coffee House, which began roasting coffee in 1918; the 21st century retreat of Oprah Winfrey; and finally, the headquarters of Ulupalakua Ranch, where people from all over the world come to experience how one of Maui’s most innovative families is finding new ways to pair the the nuts and bolts of agriculture with the people it serves.

Ranch Heritage Farming at Ulupalakua – at 18,000 acres Maui’s second largest ranch – goes back 175 years through six different owners. From the native “poi economy,” which produced taro, sweet potatoes and other crops, through sugar production and the raising of livestock, the ranch’s changing tactics reflect Hawaii’s evolution of modern ag.

In the 1840s, the poi economy started to recede when King Kamehameha III and his advisers argued that an economy of commercial agriculture would be a stronger driver of the island’s future. In 1845 Captain Lincoln L. Torbert leased land in Ulupalakua to produce beef, hogs, sheep, sugar, molasses and Irish potatoes. But sugar operations all over the islands faltered as land prices, taxes and competition grew, and in 1856, a retired sea captain, James Makee, bought the Torbert Plantation and changed its name to Rose Ranch. His approach to sugar was successful: For a decade his mill produced 800 or more pounds of sugar per year on 1,000 acres. Makee had broad ideas: Capitalizing on lovely views, he planted exotic gardens, built cottages, and started what was perhaps Hawaii’s first ag-tourism project — a festive retreat that became popular with royalty from the islands and visitors from around the world.

The ranch’s next owner, James Isaac Dowsett, who held the property from 1886 to 1900, improved the cattle herd by bringing Aberdeen Angus stock to the islands. Dowsett sold to Dr. James M. Raymond, who in 1922 sold to Frank Baldwin, the grandson of Maui’s first Christian missionaries. Baldwin renamed the place Ulupalakua Ranch. Today’s operation began in 1963 when C. Pardee Erdman bought from the Baldwins. The Erdman family revived Makee’s enterprising spirit, but in a different direction, developing the property into a favorite destination for both travelers and locals.

One of the first buildings that visitors see when they arrive is the colorful Ulupalakua Ranch Store & Grill. Incorporating new ideas about serving fresh food, the Erdman’s brought in executive chef Will Munder, who fills the Grill menu with produce harvested locally and lamb and elk raised on the ranch. “Munder thinks outside of the box,” says Jimmy Gomes, Ulupalakua Ranch Manager. “He’s put some delicious meals on the menu that the store has never sold before. What we have now is word of mouth. People are saying, ‘You need to go to the ranch to taste the food.’” 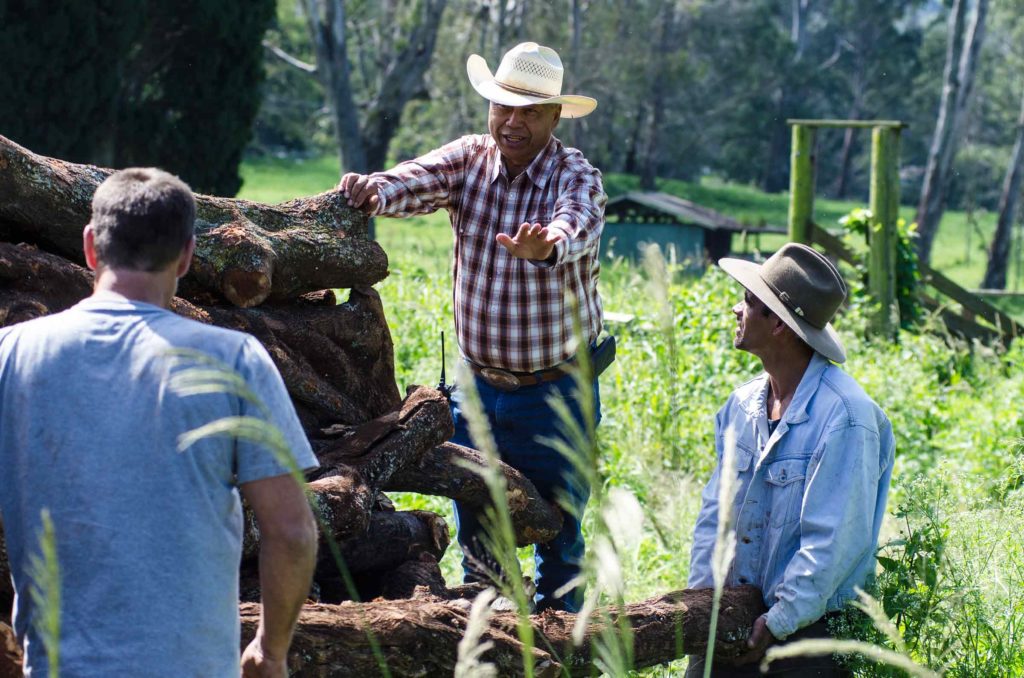 Workers talk through the days’ chores at Ulupalakua ranch.

A visit can start with one of the daily estate tours that begin at a small museum. Photos of early ranch life show how Paniolo, Hawaii’s distinctive cowboys, escorted cattle through the water from Makena Landing to waiting skiffs that took the animals to cargo ships bound for the U.S. mainland. Makena Landing is now a public park.

Guests also can see enormous trees surviving from Makee’s ownership and a hula dance performance ring where Makee helped revive the island’s ancient form of storytelling. They explore facilities for making pineapple-wine, and finish the tour at a wine-tasting bar inside the same cottage where King Kalãkaua and his wife, Queen Kapi’olani, spent many a festive evening in the late 19th century.

The tasting experience introduces much more than the ranch’s famous pineapple wine. In 1974 the ranch partnered with Emil Tedeschi, of Napa Valley’s Tedeschi Family Winery, to develop vineyards and new wines suitable for the tropics. Today, the vineyards produce Malbec, Syrah, Grenache, Viognier, Gewürztraminer and Chenin Blanc grapes. Wines from the ranch are distributed to many U.S. states and to four countries around the world.

Into the Outback Beyond the headquarters, Highway 37 extends south, southwest and then eastward across Haleakala into famously isolated leeward terrain. As the land plummets to dry coastal areas and rises to cooler forests at 6,500 feet elevation, it’s easy to see how Ulupalakua Ranch covers a remarkable range of 10 microclimates. Far below, at the shoreline, condominiums and four star resorts rise from land that Ulupalakua once owned.

This part of the ranch also hosts one of the island’s more startling scenes: Eight massive wind turbines that pin-wheel at “Star Wars” heights into the cobalt sky. The project was quite controversial when Ulupalakua first leased the land to Sempra Energy. The 3-meg turbines can power 10,000 homes, Gomes says. “We have income we never had before. It affords us to keep open space.” Sometimes cattle can be seen clustered in a corral near the turbine’s bases. 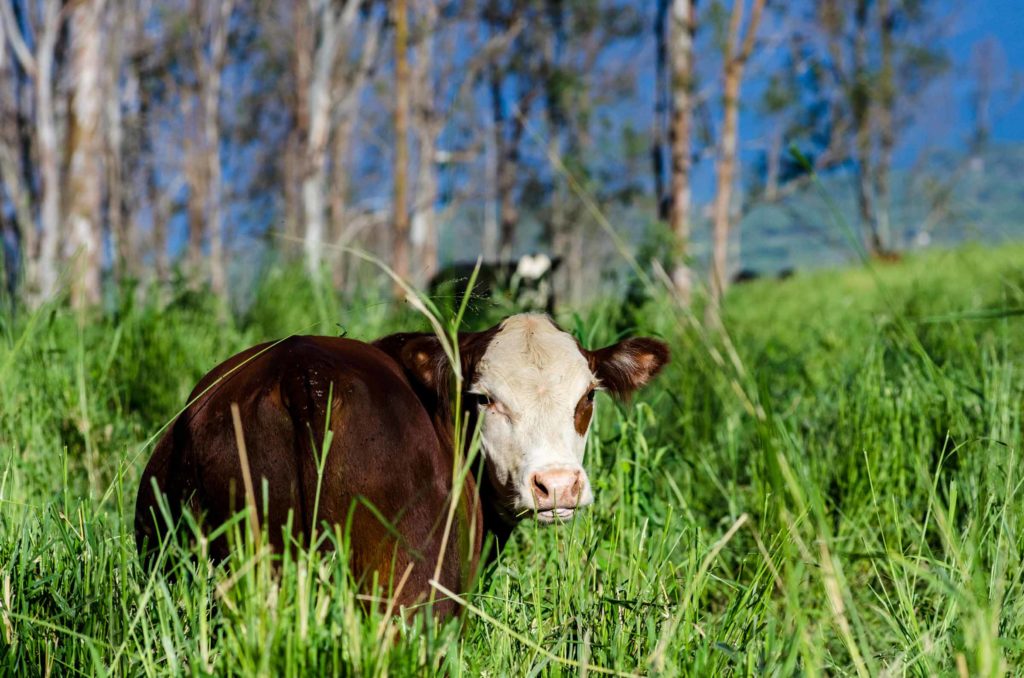 Further along the highway, the earth splits and the guts of Haleakala— rifts of chunky volcanic rock — spill in a vertical seam to the sea, a reminder of how the first of the Hawaiian Islands emerged 30 million years ago when a pool of hot magma began seeping out of cracks in ocean floor, according to the United States Geological Survey. As ocean’s tectonic plate shifted, the emerging magma hardened in the cool water and built up in layers. Over thousands of years, more islands were born. Haleakala began its undersea life 1 to 2 million years ago. There are still active volcanoes in Hawaii, and active underwater vents are building new islands, but the USGS says the youngest of these won’t reach the ocean’s surface for another 30,000 to 100,000 years.

Cultural change has been quite a bit more volatile than geology in the past few hundred years, starting in the 12th century when Polynesians navigated to the island, and moving through the arrival of new ethnic groups that included Euro-Americans, Portuguese, Chinese, Japanese, and African Americans coming as laborers, missionaries and businessmen. Livestock producers have adapted by pooling all the tools, technologies and materials available to them. As one of the Ulupalakua tour guides likes to say, “The Erdmans are fixers.” They are visionaries, too.

“You can’t just survive only on cattle,” Gomes says. “We’re looking at new projects — aquaponics, tea, and alternative crops. We’ve started a koi seed orchard and we have goats and sheep for weed control. We’ve had a dry land reforestation project for the last 20 plus years, which has all been planted with native plants. All of these things will help us improve our bottom line.”

Wouldn’t the bottom line be stronger if the ranch converted its scenic acres into resorts, a person might ask. The owners would rather preserve Hawaii’s ag tradition, Gomes says. “It’s the lifestyle that we want to perpetuate,” he says. “We want to be the best we can, and with that in mind we protect our natural resources, whether they be our spring water, the vegetation or the native plants. We want to be good stewards, diversify and continue employing people who love being in Hawaii.”

Frank James, brother and partner of outlaw Jesse, had a promising career as a farmer.