As a sheepherder working in northern California’s Sierra Nevada mountain range during the mid to late 20th century, Abel Mendeguia knew many things. He knew how to scout terrain to find fresh grass for his 1,800 ewes and lambs, how to ease the scampering sheep left or right by commanding his dogs with his hands, and how to persuade a lactating ewe to adopt another ewe’s lamb after her own young one had died. But in some ways the most heroic of the skills may have been an ability to know the temperature of a brick oven using the skin of his bare arm.

Putting the bread into an oven that was too hot would dry it out, but getting the temperature just right would produce a soft, crusty loaf: That could make all the difference between a ticked off herder and a content one, and by extension an anxious band of sheep (not good for animals being managed to increase their weight) and a relaxed one.

Abel (pronounced Ah-BELL) was part of a wave of young Basques who immigrated to the American West from the Pyrenees mountains in Spain and France in the early decades of the last century. Driven from home by a poor economy and a shaky political scene, the young Basques traded their traditional black barrettes for cowboy hats, and their native Basque language for the Spanish and English that was spoken on the range. But they did not give up their bread. 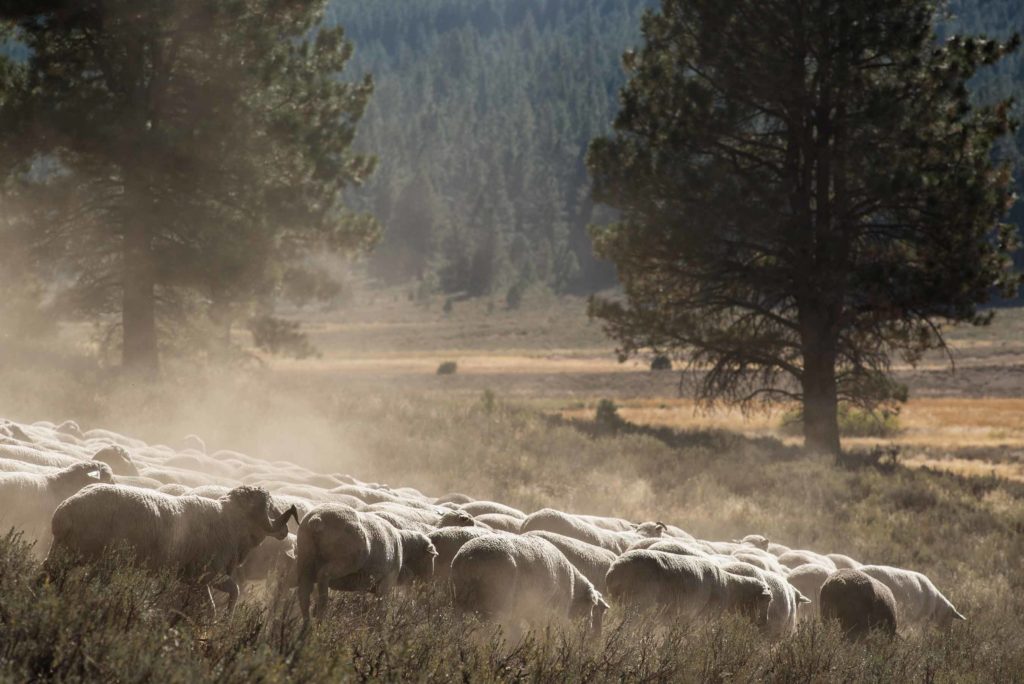 Sheep are still grazed on Tahoe National Forest lease allotments, including this one in Russell Valley.

Sheep Man. When Abel arrived in Nevada as a 20-year-old in 1951, he was unfamiliar with the work of running big bands of sheep. As a boy in Lasaca, Spain, he’d watched over small groups of livestock, but never a large one. And like other children there, he was not used to preparing food.

“We never baked bread; We were not allowed in the kitchen!” he says, now 85 and living in Reno, Nevada, his chunky black brows lifting into cheerful triangles with his smile.

Abel spent 8 years herding in Nevada and 8 years herding in California. In 1966 he and a partner bought a sheep outfit that had been operational since the late 1800’s. Using a combination of leased public and private lands, they moved sheep from the high eastern Sierra in summers to farmlands around the Sacramento Delta in winters.

In summers, Abel oversaw the work of five herders, each of them camping with 1,500 to 1,800 ewes and lambs in remote mountain locations depending on where the foraging was best. The herders did not leave the animals, and relied for food on Abel’s delivery of lamb, rice, dry jack cheese, and bread. The slightly sweet, thick-crusted bread was a comforting link to home for the often lonely men.

“The camp tenders bringing this piece of home to them was terribly important,” says Julia Costello, an archeologist whose extensive work on freestanding bread ovens built by Italian immigrants in America touched on the outdoor ovens built by the Basques. “The type of bread was distinctive to the Basque homeland, and the form (round loaf) and attributes (crisp, hard crust; soft interior) would look, feel, and taste like home.”

Each loaf was big – the size of the 12-inch Dutch oven it was baked in. Herders would get one or two loaves with a delivery.

Summer Camp. Bread baking took place at a central location called the Main Summer Camp, or kanpo handiak in Basque, writes the historian Joxe Mallea-Olaetxe in his 2008 book “Speaking Through the Aspens.” Twenty miles north of Lake Tahoe, Russell Valley, once a favorite stopping point for 19th century wagon trains, was the main summer camp for the sheep outfit that Abel bought, and in 1966, he began an association with it that continues today. Sheep men were working in Russell Valley as early as 1894, according to U.S. Forest Service historians. It is now managed by the Tahoe National Forest, and is still leased to a sheep outfit for grazing.

On the approach to Russell Valley Camp, a jeep road leaves the forest and descends into the meadow where five sun-bleached wood buildings amid tall dry grasses and a lazy stream called Dry Creek. There are the bunkhouse, the springhouse, the washhouse, the cookhouse, and — the gem of the batch — the 1945 brick oven wrapped in a framework of cement and stone.

In 1981 Abel married a city girl from Pennsylvania who fell in love with him after visiting the main camp with her brother for dinner. By the end of 1982, Judy and Abel had bought out their partner and owned the sheep company outright.

For the couple, being owners did not mean leaving the sheep. Many other Basques working in the industry moved on after a few years, joining the U.S. workforce in other ways; but Abel — he loved the world of sheep. He liked being part of their circle of life. And that meant when it came to testing the oven for the baking of bread, it was his own arm that went into the heat. 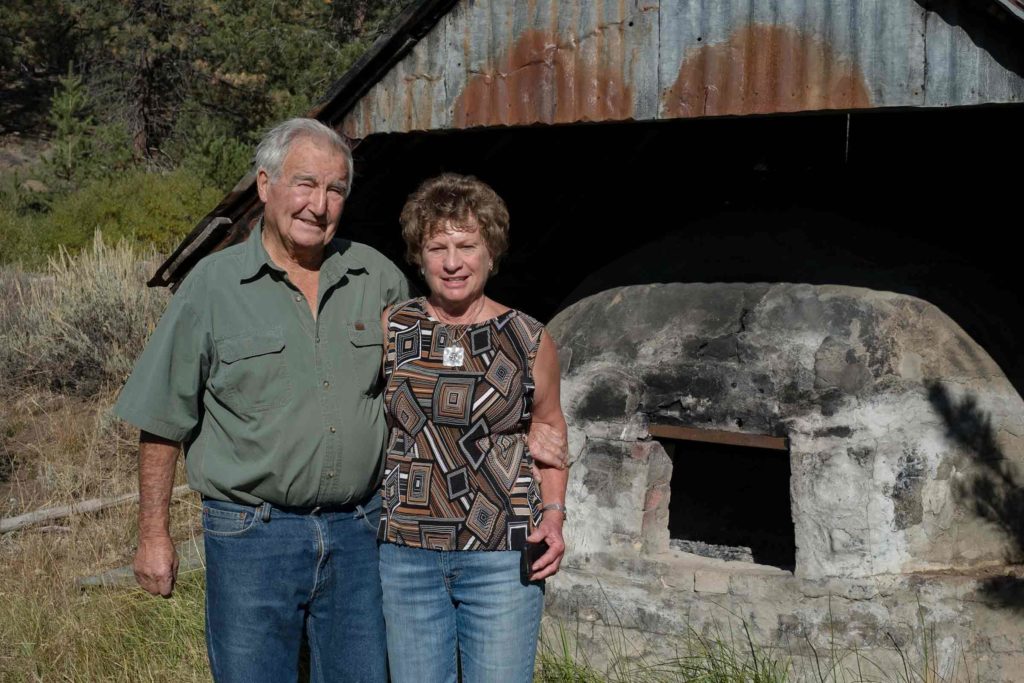 In the 1980s and early 1990s, Abel and Judy Mendeguia spent summers managing sheep bands from their main camp in Russell Valley. Every five days, on “Bread Day,” they used 50 lbs of flour to bake bread in the domed oven onsite.

Homeland Loaves. Many of the Mendeguias’ memories circle around food. More than half the Russell Valley Camp buildings were involved in food storage and preparation. Made every five days, the bread required 50 pounds of flour and took a whole day to complete, Judy says.

“Early in the morning they would start the ovens using old lumber they gathered at the start of the season a nearby lumber mill,” she recalls. “They’d fill up the oven with the wood, light it, and let it burn down. Abel and Frank, our camp tender, would work the dough and heat the little shower house up real hot. They’d let the bread rise in the shower house and then punch it down. They did this twice.”

They’d scrape the burned wood ashes out of the oven, and that’s when the Abel would ready his arm. The oven had to be 350 degrees — no more, no less.

“If you could put your hand in the oven and hold it to the count of ten, it was okay for the bread,” Judy says. “If you had to pull it out before that, then you’d have to let the bricks cool down a bit more.”

The bread cooked while the oven heat ebbed away.

“The smell was lovely,” Judy says, so nice that a poaching scout who worked down the valley would make a point of stopping by camp about the time the bread was finished. “I’m sure he could smell it baking,” she says.

Slender French baguettes seem dainty in comparison to the herders’ pillowy loaves. The bread was fitted in the Dutch ovens so as to swell up in the heat and pop off the lids. The perfect loaf would taste slightly sweet, almost like French bread but not quite as squishy; and it would feel significant in the mouth, with a substance something like sourdough but a flavor not quite as sharp.

The Mendeguias were respected for more than just their bread. When Abel and Judy were in camp, people from all around the area would stop by hoping for an invitation to dinner. “It was not unusual to have 13 guests,” Judy says.

One of those guests was the archeologist Susan Lindstrom, who in 1973 was working nearby for the Forest Service. “I lived out in a little trailer in Stampede Reservoir,” she says. “I was invited to Russell Valley Sheep Camp for the Fourth of July. The oven was all fired up and we had the lamb and bread and the picon punch. I remember everything being so delicious. People are interested in that history.”

But are they curious enough to stick a hand into the dark recesses of the unproductive Russell Valley oven?

Only the oven can tell. The buildings are abandoned, but standing tough on the edge of the meadow in the sun, they do seem poised for something.

In Part 2 of the series, learn from a herder how to bake Basque bread in a real oven.

Cotton has a long and storied history in northern Alabama.