It appears rumors of the death of winter canola have been greatly exaggerated. Like Mark Twain, who coined a similar phrase in 1897, winter canola — which has recently survived brushes with drought, harsh winters, and a harvest-time deluge —  is now getting its second wind.

First introduced in the southern Plains region in 2005, acreage of the winter annual broadleaf crop grew to 350,000 by 2012. Dry weather and winter kill in 2013 and 2014, along with harvest problems in 2015, shrank the crop to 100,000 acres last year. That decline prompted one processor in Oklahoma City to close, another in nearby Enid, Oklahoma, to cancel  construction plans. Some farmers concluded the crop was finished.

“Based on seed sales we think acreage this year has doubled, so the crop has rebounded,” says Ron Sholar, executive director of the Oklahoma Oilseed Commission. “This indicates  winter canola is indeed a credible alternative crop — something that’s really needed in this region.”

Few choices. Sholar explains that farmers in Oklahoma and surrounding states have traditionally had little choice but to grow continuous wheat — a rut that has hampered yields, reduced grain quality, and tarnished the region’s reputation in the market. “We need to rotate crops to clean up winter annual grass weeds in wheat, but there have been very few successful alternatives, so winter canola really needs to work,” he says.

Veteran canola grower Bob Schrock says he’s seen the renewed interest in his Kiowa, Kansas area. “There were two to three times more acres planted in our county this fall and that’’s great. We need to make winter canola a large enough market so the universities can justify their involvement, agribusiness will invest in seed, chemicals and other inputs, and additional processors will get involved.” 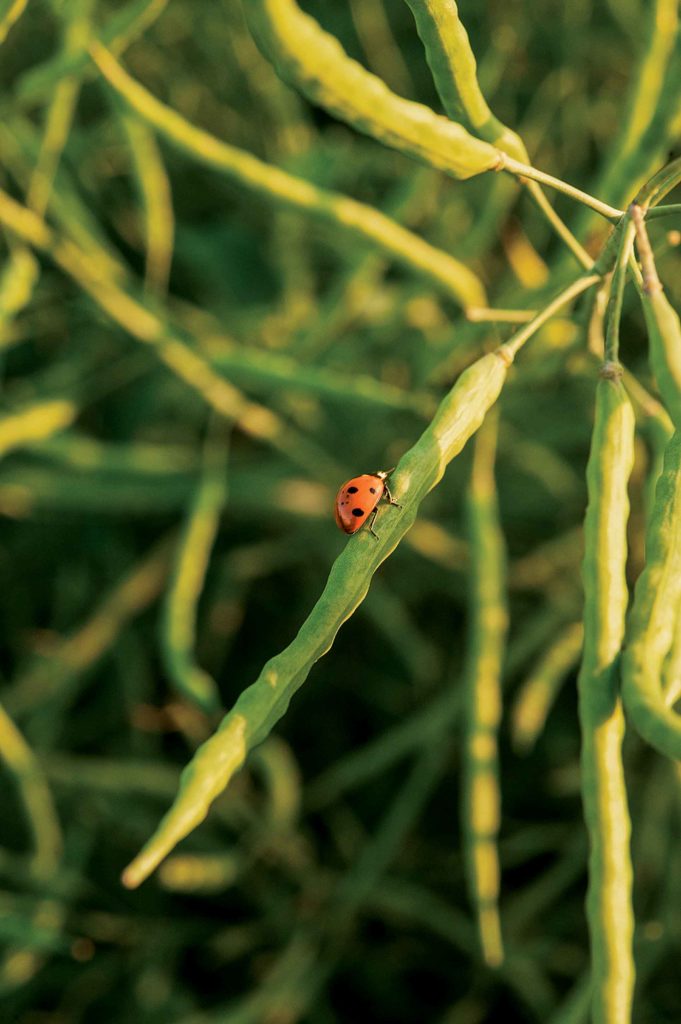 The market for heart-healthy cooking oil has raised canola’s appeal.

Low wheat prices are one of the obvious causes of canola’s changing fortune, but Schrock thinks there’s more to it. “In the 13 years that we’ve had canola in our rotation the benefits have been huge. Growing canola has made me a much better wheat farmer by teaching me management lessons I wouldn’t have learned otherwise.”

“Not only are our wheat fields cleaner but our wheat yields typically average 30 bushels per acre more than our neighbors thanks to a yield boost behind canola that lasts through two wheat crops. And, we’re getting higher yields while actually applying less nitrogen because canola’s deep tap root cycles it from below wheat’s root zone and back to the surface.”

Miami, Oklahoma, farmer Brent Rendel decided to increase his winter canola acres after running crop budgets last summer. “I like to compare the break-even yields at various crop prices that it takes to cover input costs and land rent. When I did this last summer, I figured it would take 28 bushel-per-acre canola and 55-bushel wheat. Although I can certainly grow 55-bushel wheat, my records show I’ve only been able to do that about 35% of the time. However, my canola yields have been above 28 bushels 80% of the time, so although profiting with either of these crops will be challenging this year, I have more confidence with canola,” he says.

Lessons learned. Winter canola’s weak link has proven to be winter-hardiness and the harsh winters of  2013 and 2014 that revealed it are also contributing to the crop’s revival. “It gave us an opportunity to evaluate varieties and hybrids for winter hardiness,” says Mike Stamm, canola  breeder at Kansas State University.

“Much of the genetics in this crop has come from Europe where this trait wasn’t tested by the milder climate. We now know what’s most winter-hardy and are developing that trait in new releases,” he adds.

Production practices have also been refined to improve winter survivability. “Clearing residue from the seed row is critical for no-till planting,” says Oklahoma State University canola specialist Josh Bushong. “Many no-till growers are using planters —  rather than drill — for that reason, or they’re utilizing some type of strip-till or vertical tillage system.”

Even with conventional tillage, Rendel is focused on winter survivability and the benefit precise planting can play in it. “Our twin-row planter singulates the seed for consistent plant spacing, which eliminates interplant competition. Stem diameter and rooting depth increase, and that makes the crop more winter hardy.”

Rendel says he’s learned he can count on 90% emergence with his system. “We want about 200,000 plants per acre so depending on seed size that’s just over two pounds of seed, which is less than half of what was initially recommended with a drill.”

Schrock is focused on properly timing fertilizer, fungicide, micronutrients, and insecticide applications to get his crop through the winter.

“Too much fall growth is a problem, so we limit nitrogen at that time and sometimes depend only on the carry-over. Plant health is also critical, and we’ve experimented with multiple fungicide applications (which can also limit plant growth). And, we have zero tolerance for insects and often include an insecticide with herbicide applications made in the spring and fall as a safeguard,” he says.