A 2½-inch circle well worn into the fibers of a shirt or jean pocket is as recognizable of a brand to farmers and ranchers as the golden arches are to fast food connoisseurs. They’re the badge of a smokeless tobacco user. But as Whitehall, Montana, cowboy Dave Holt discovered, his 45-year chewing habit left a mark on more than his clothing.

Just as his dentist warned, Holt developed a fast-growing lump in his mouth. A biopsy confirmed cancer and the next day he started chemo therapy. He had already begun the process of quitting the lifelong habit, but this news steeled his resolve.

Poor substitutes. Addiction goes far beyond chemistry. It’s physical. “You have to have something in your mouth,” Holt says. So he tried some alternatives. “They were worse than the chew. They were like sawdust and would eat up your lip. It’s really hard to quit when you can’t find something that feels good in your lip.”

So Holt started chewing anything he could. He tried coffee grounds, tea leaves, oats, corn, barley, pine needles — which are terrible, he reports — even a Styrofoam cup. “I was in a health food store and saw a bag of alfalfa leaves. A light went off and I bought it,” Holt recalls. He brought the leaves home and stuck them in the food grinder. “I added a little peppermint Schnapps to hold it all together and it turned out pretty dang good!” 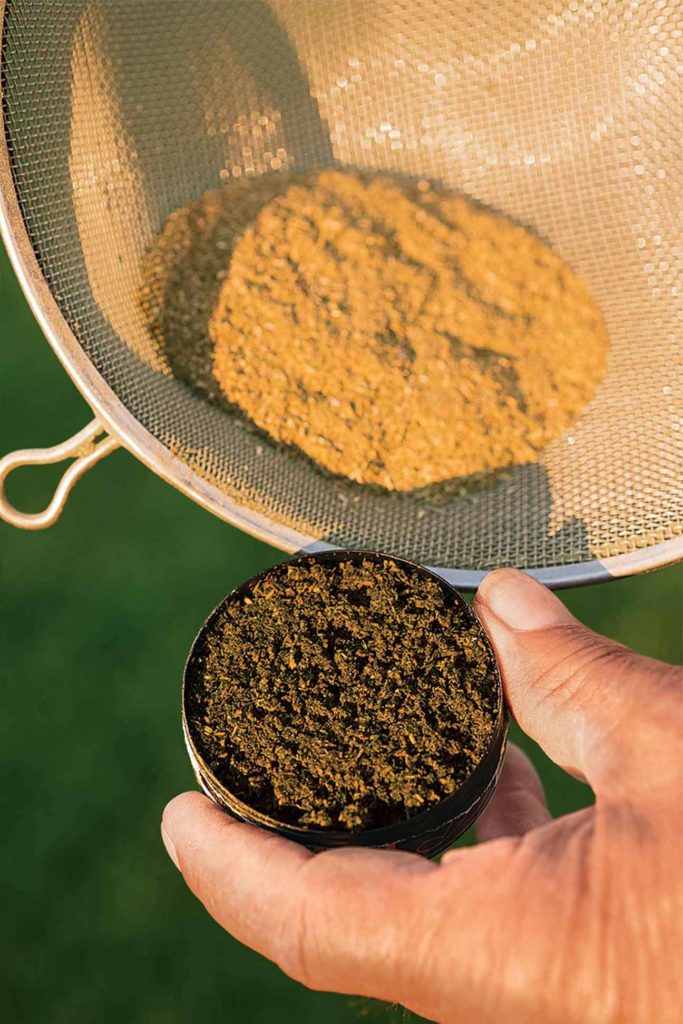 Alfalfa leaves are separated and ground before mixing.

He tossed the wet alfalfa concoction in a can in his pocket but he didn’t have a foolproof winner in his search for a chew replacement just yet. “It started making silage and was stinking up my pocket,” he recalls.

Honing in. While it wasn’t perfect, Holt recognized he’d found the base product for his tobacco replacement. The former ag teacher and horse and purebred cattle breeder started experimenting with various additional ingredients and handing out sample cans to his friends at the rodeo arena.

One of those friends suggested he work with the University of Nebraska’s food division to tweak the product. They figured out how to stabilize the alfalfa using honey and vitamin C. With a stable product, Holt and his wife, Colleen, kept tinkering with flavors to cover the alfalfa taste and create a product that not only felt like chew, but had the right taste, too.

“Tobacco has a real bite. There’s a burn there that tobacco chewers are after so we incorporated cayenne pepper,” Holt explains. “It’s healthy, too.”

Healthy habit. Alfalfa, cayenne pepper, honey, vitamin C, and peppermint — now from growers and distillers in Kalispell, Montana, not a schnapps bottle — all made the final ingredient cut. And each ingredient offers health benefits beyond replacing tobacco. Peppermint is known for its soothing effects on the digestive tract, cayenne as a circulation stimulant,  honey for a slew of benefits, and alfalfa for vitamins and nutrients, like protein —      just ask a well-fed dairy cow.

Colleen even figured out she could make a soothing tea with the product that she drinks regularly, but definitely at the first sign of a cold. Holt says the stomach-soothing mix helped him battle nausea caused by chemo, too.

They definitely needed soothing solutions as they navigated finding the perfect alfalfa varieties for their product and figuring out an efficient way to separate the leaves from the stems. 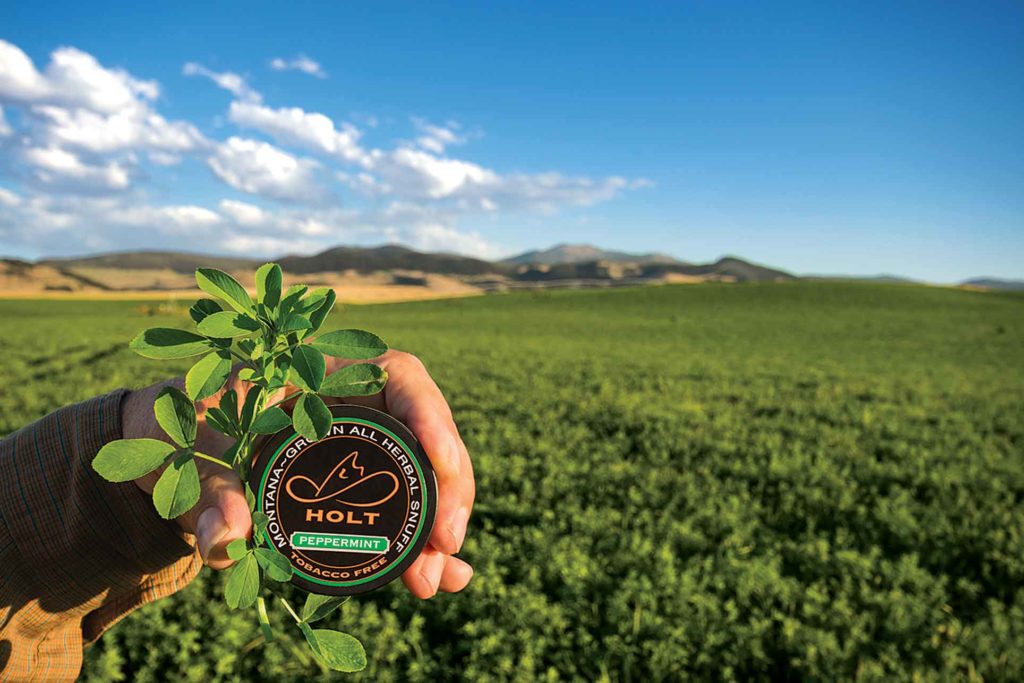 Quitting. The big payoff for the Holts is helping others quit, or preventing young people from ever starting. They give cans to the local high school wrestling and rodeo teams where they’ve seen many a habit take root. Holt Tobaccoless Chew is also used in the Quit Spit college tobacco use prevention program and is carried in several hospital pharmacies.

“It’s good to know you’re helping people, especially after what we went through,” Holt says. To learn more, visit WorldsGreatestChew.com.