A bunch of farmers sit around, having a conversation about the usual subjects: the weather, regulations, and markets. It’s the sort of banter you can hear in cafes and fertilizer dealerships anywhere.

But we weren’t in Kansas anymore. Sitting cross legged around bowls of soup and plates of roasted vegetables in a wooden hut on stilts, we were in Pok Bun, a village of about 120 people in northwestern Thailand. Just a few miles from the country’s border with Myanmar, or Burma, Pok Bun is the biggest, highest of seven related villages spread across three steep mountains. Its residents, all of whom are members of the Karen ethnic group, had recently begun welcoming small groups of tourists as part of an economic diversification effort. They stared at the six guests, incredulous that anyone would pay money and climb for hours up the mountainside just to visit them.

Nobody was sure what the prospects would be for the crops just weeks from planting. The past few years had been worryingly dry — dry enough to empty the massive lake behind Doi Tao dam, leaving just a waist-deep creek choked with cattle and water buffalo trying to stay out of the heat. But more worrisome was the prospects for the farmers themselves. 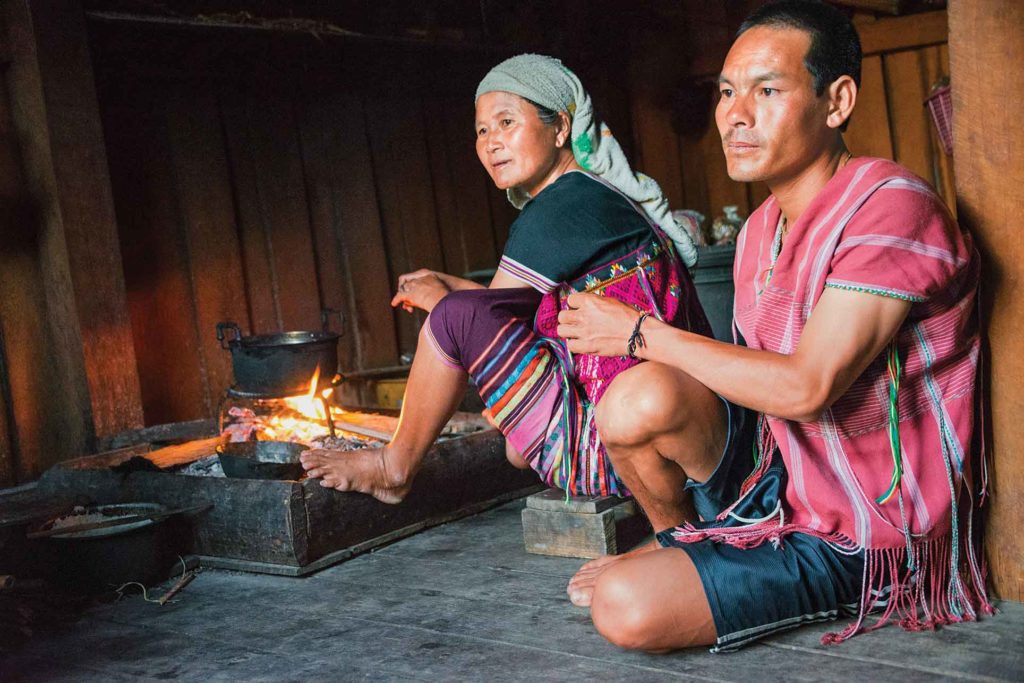 Li Chao and his wife (also called Chao) prepare for supper. A bed of sand keeps the fire pit from burning their home’s wood floor.

Air quality regulations banned burning. But the farmers had just spent a week hacking away about five acres of steep forest with machetes and were ready to put the slashed trees to the match. Fertilized by its ash and open to the sky, the new field would, with luck, yield enough dry-farmed rice for four families.

Tough choices. The men passed an old beer bottle full of homemade oh lao, and each poured a dollop of the rice wine into a tin cup.

“What will you do?” I asked Li Chao, a youthful farmer who supports his family by growing rice, hunting in the forest, and selling cattle. Oo Sangpresert, our guide from the northern Thai city of Chiang Mai, translated the question as the farmers leaned in to listen.

“He says they’ll burn the forest and go to jail,” Sangpresert said as Chao watched intently. “At least their families will have rice.”

Ancient practice. Karen farmers like Chao — the largest of Thailand’s “hill tribes” with 400,000 in the country and millions in their native Myanmar — have been grappling with the burning question for years. Clearing, burning, planting, and leaving the forest to grow back dates back to the dawn of agriculture; experts believe the Karen have been practicing it for at least hundreds of years.

Many call the practice “slash and burn” agriculture, though that term brings back echoes of a 1957 United Nations Food and Agriculture Organization (FAO) that deemed it “a backward type of agricultural practice.”

In places where burned forest is overtaken by pasture and long-term cropland, or where demand for food has shortened the usual 7-to-10-year fallow period between crops, slashing and burning can indeed be devastating. 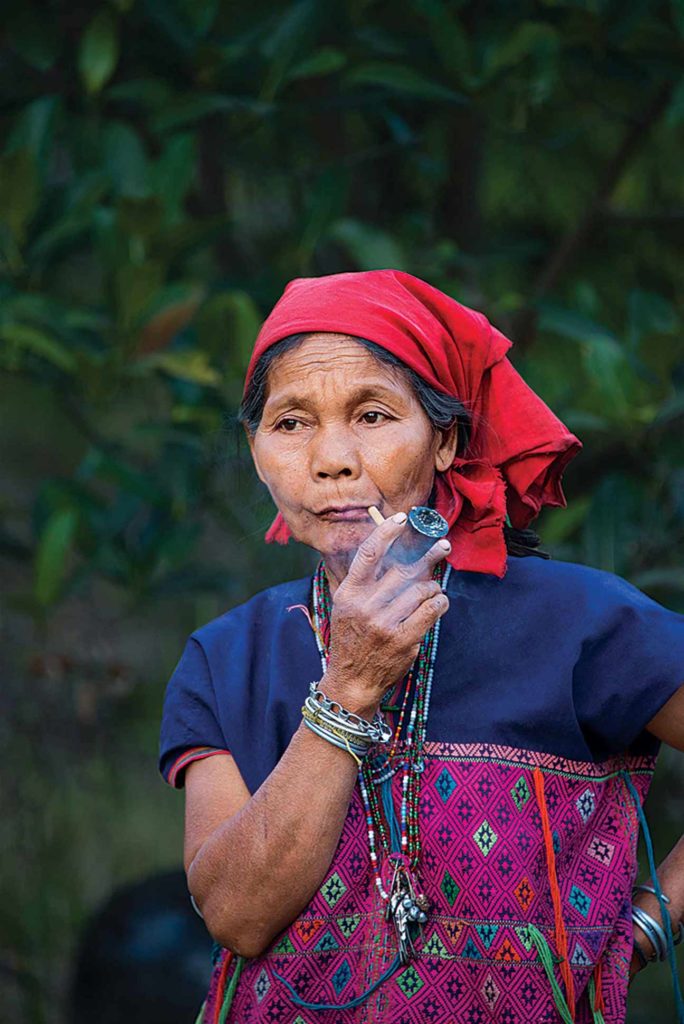 A village elder enjoys an afternoon smoke of home-grown tobacco.

But proponents of Chao’s approach to farming say farmers like him improve biodiversity in the forest by cycling patches through phases of clearing, cropping, and regrowth, and add that the recharge of forest actually sequesters more carbon than burning releases. They call it “swidden agriculture,” using an antiquated English term for burning.

Rethinking the value of swidden agriculture has serious political ramifications. At Chiang Mai University, Yos Santasombat writes that the image of the Karen is shifting from “forest destroyers” to “indigenous forest managers.”

he change in status is giving the Karen a place in conversations about the management of Thailand’s natural resources, Santasombat believes, and re-casting an ethic minority long portrayed as illiterate hill people into knowledgable “children of the forest.”

In coming years, that could help Karen highlanders fight government relocation programs and hang onto their villages and hunting grounds. But today, farmers like Chao still find themselves on the wrong side of the law when it comes to national air quality rules.

New ventures. Chao says he and other farmers in Pok Bun clear only enough forest for subsistence rice plantings. (“Otherwise, it’s too much work,” Sangpresert translates.) Garden plots of ginger, bananas, beans, greens, and shrubs round out the independently grown menu. The other home-grown staple is tobacco — chin-tall plants flower beside every home, and people smoke all day long. Women enjoy their tobacco in long-stemmed pipes, while men roll conical, green-leafed cigarettes.

But the Karen are part of the cash economy, too. The headman of the village, Cam Gyong, is steering the community to a new venture — shade-grown coffee. Like many Karen, he worked as a laborer in the city, learning Thai and encountering locals and tourists, before coming back to Pok Bun. In town, coffee caught his eye. He figures his village can pull in $10 a pound for coffee and establish plantations without cutting down the forest. Just a few yards from drip-irrigated coffee plants, he roasts beans in a wok for a morning cup. 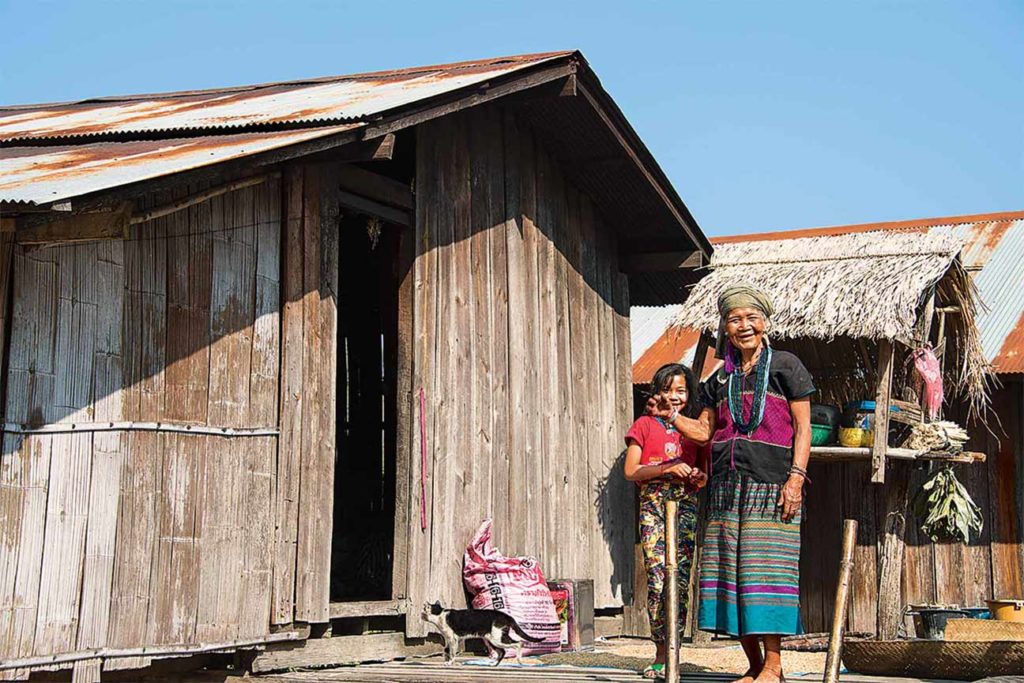 Beneath Chao’s stilt house sits a walk-behind, single-share plow, its gas motor hooked to a pair of steel wheels. He uses it in the terraced fields outside the village, where many farmers raise flooded paddy rice for cash markets. After harvest, they let the cows in to graze the straw, wooden bells clanking gently.

Chao owns 32 cattle, each worth about 20,000 baht ($571) in the city. Selling cattle generates cash for luxuries like his solar panel, battery, and television, whose antenna is bolted near the ladder that leads to his door.

Slaughtering a cow for family use is a big affair. While the farmers were talking drought with visitors, neighbors spent all day and all night roasting a freshly killed cow, hacked into hefty subprimals laid side-by-side on a bamboo grill the size of a queen-size bed.

With the exception of the occasional cow or pig for a feast, much of the meat in the village comes from the forest. Wild elephants roam the woods, but most Karen game is small—many hearths have a shelf over the fire stacked with roasted mice, squirrels, and other little mammals ready for the stew pot. Over one fireplace, a fanged jawbone evokes a mash-up of Bambi and Stephen King’s killer dog Cujo. It’s from a tufted deer, a 50-pound oddity whose males sport inch-long canines.

The 22 schoolchildren of Pok Bun also enjoy a healthy meal each day at school, where their teacher — sent by the Thai government — oversees a larder stocked with cabbage, bean sprouts, sweet potatoes, cauliflower, squash, and rice.

Graphics plaster the classroom: flower anatomy, plant life cycle, monks. There’s a map of the country, and a poster depicting highlights in the life of King Bhumibol Adulyadej, who ruled Thailand for more than 70 years until his death last October and was widely revered as a friend of farmers and ethnic minorities.

New era. As Thailand shifts to a new era under a new king, the Karen of Pok Bun are shifting too — to more cash crops, closer ties with the city, and even hosting tourists.

“Don’t forget us,” says headman Cam Gyong. As we head down the mountain, past another swath of newly cut hillside that will soon be burned and planted to rice in process as old as farming itself, I know we won’t.

There’s good news in ag...if you know where to look.