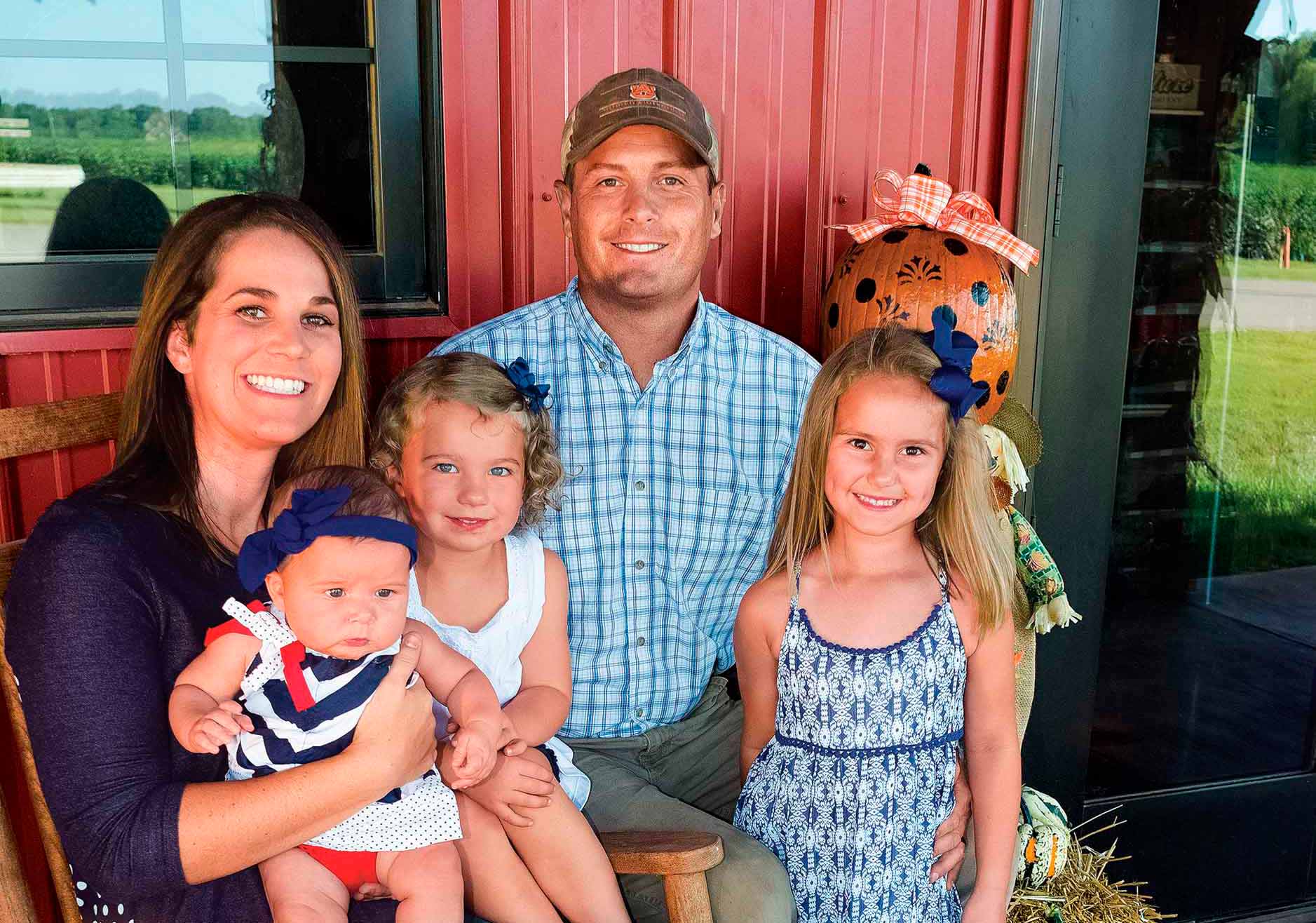 Thinking about agriculture drives Kasey and Stewart McGill to come up with new ways to tell its story in their booming neighborhood at Meridianville, Alabama, just a few minutes outside Huntsville.

Great industry. “We both have such a passion for agriculture,” Stewart says. “We get 60,000 guests a year out here and we present farming’s story to them in the best way possible. We have all kinds of activities here. We want people to have lots
of fun and we also want it to be educational. We’re Disney World of north Alabama. That’s my mindset.”

Kasey’s father, Steve Tate, farms here with his brothers Mike and Jeff and cousin Pat Brown on a place started by his dad, Homer Tate, in 1948 with 100 acres. Now it’s 5,500. After marrying in 2010, Kasey and Stewart wanted to farm near her family but still have their own operation. They started small and kept debt low. She also works as a crop insurance agent.

The agribusiness began with 15 acres of pumpkins. Now it’s up to 75 acres, all pick-your-own, for $5 a pumpkin, regardless of size. 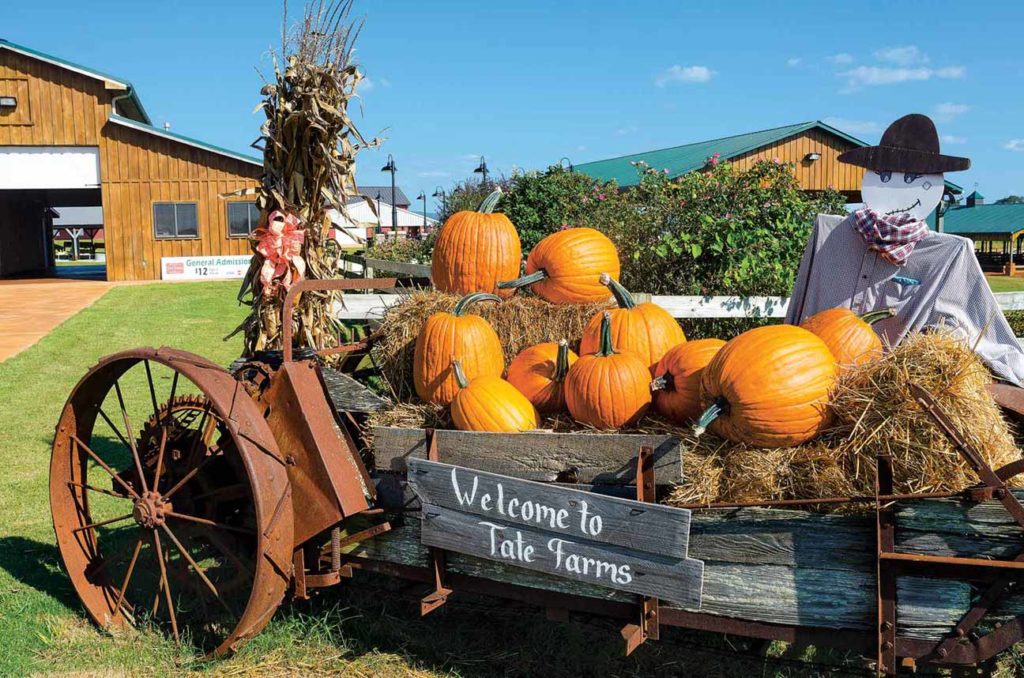 A pumpkin-filled welcome wagon greets visitors to the farm.

It’s more than just pumpkins, though. They host a number of weddings each year in addition to outings for Huntsville companies like NASA, Boeing and Target Distribution.

Agritourism requires a mindset change from the soybeans, corn and cotton growing in their fields. “You can’t have a flat tire. You can’t be late. You can’t be wrong. Everything you do matters. With social media, when they walk in your door, the world knows instantly that they’re here and what they’re experiencing. They feel like they know you before you ever meet them,” Stewart says.

“You’re never going to please everyone. There’ll always be that 2%. It isn’t easy and that’s okay with us. But if you do a good enough job, customers will defend you on social media.”

Their agritourism business is just eight miles from downtown Huntsville, Alabama’s second largest city.That gives them a built-in market of families new to the region who work in aerospace or other industries.

Stewart, an Auburn University graduate, had some business experience managing an arena. He also worked as assistant softball coach at Auburn. He was more than prepared to work on the farm, he says.

Trust. “I’d worked here part-time as a teenager, so I was familiar with Tate Farms. When they hired me to run the agribusiness, they entrusted me with it. They let me run it the way I thought it should be run. To be as young as I am and be doing that has been a blessing,” Stewart says. 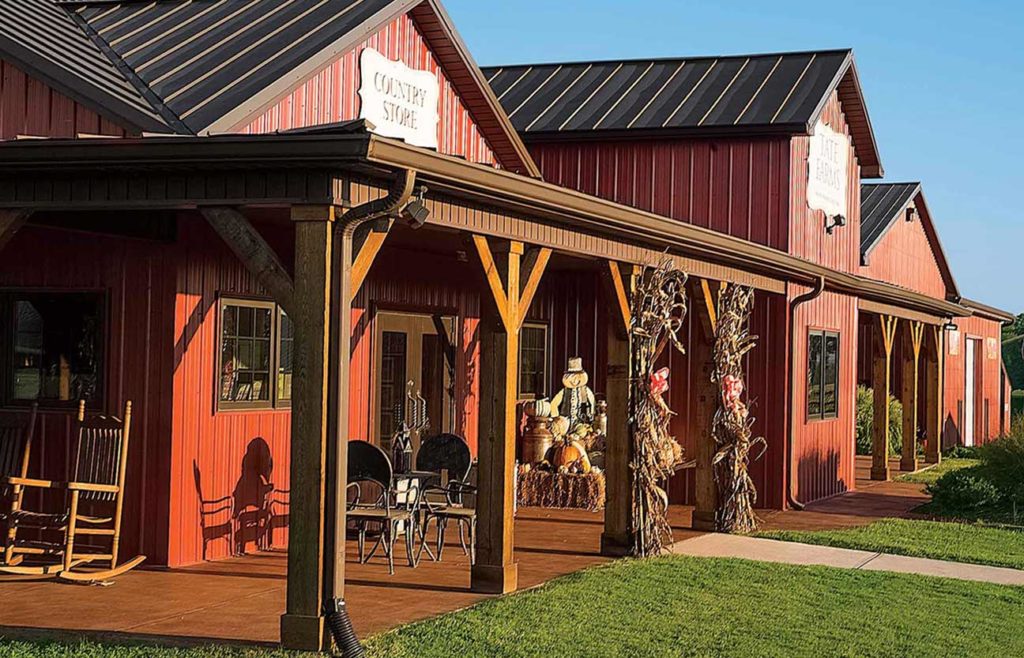 “With social media, when they walk in your door, the world knows instantly that they’re here and what they’re experiencing. They feel like they know you before you ever meet them.”

“The Tates didn’t find me land to farm on my own. I got land nobody else wanted. I plant and drive the combine for them. I have input with the financial decisions. They didn’t help me get started farming but they gave me knowledge, those things you don’t learn about in school.”

He, Kasey and their employees interact with the public, pointing out the importance and realities of farming. “As a young person, there’s so much opportunity in agriculture and it’s not all just farming. There’s tremendous opportunity in genetics, in weed science, in marketing. It’s not just planting seeds. There’s a huge need to set up precision technology. You can have a financially rewarding career because there’s such a need,” he says.