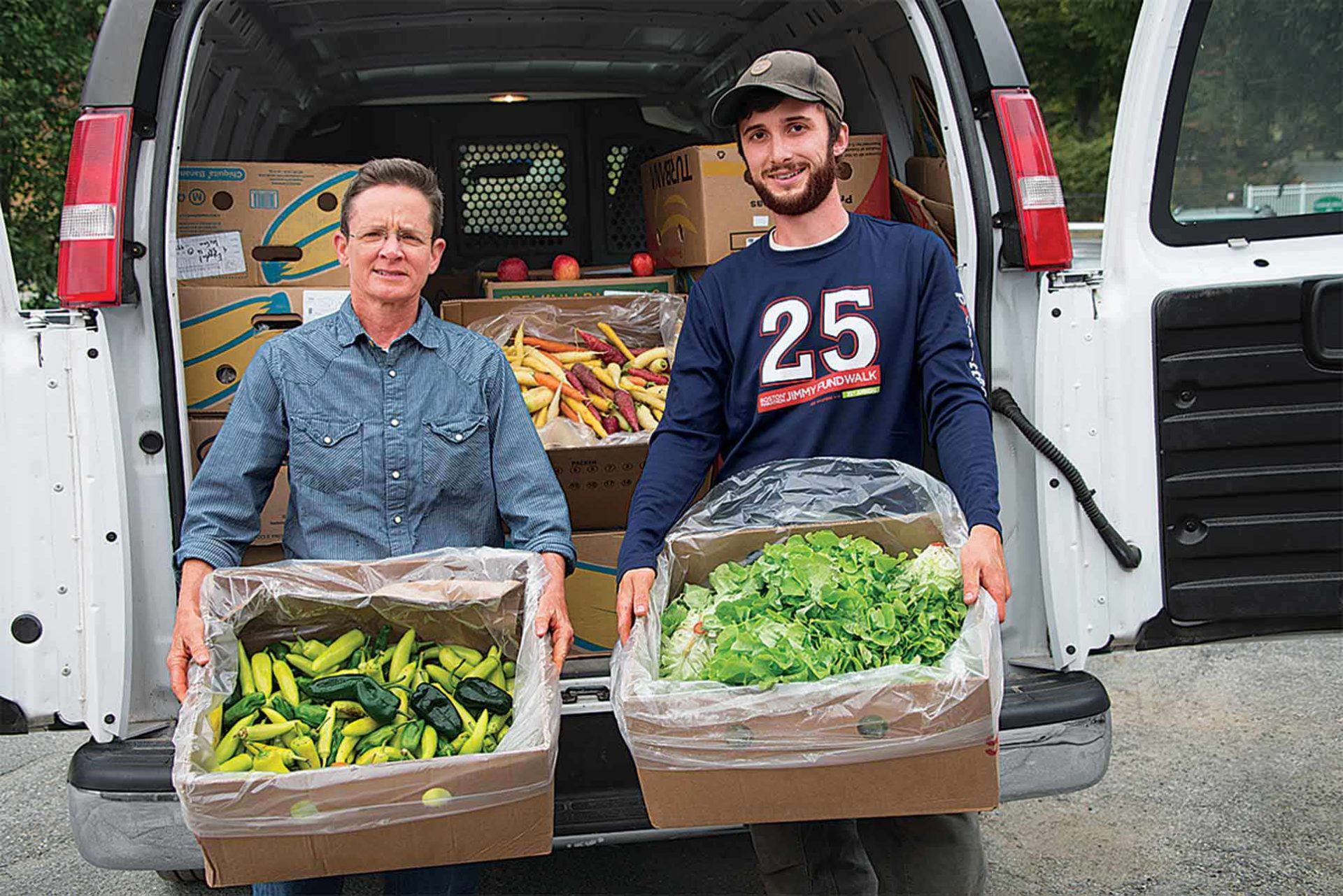 Carl Hills briefs four volunteers who have come to his 180-acre Kimball Fruit Farm in Pepperell, Massachusetts, to harvest surplus apples for Boston-area food banks. They’re gleaners, picking leftover crops for the disadvantaged in a practice that goes back to Bible days.

“Right now, it is all about labor and the cost of labor,” Hills explains. “For me to pack an apple, put it in a box, and pay a commission to a man down in Boston, he’d give me zippo for them. It’s a business decision.”

For Hills, it’s also an ethical one. For the past six years, he’s been the largest crop donor to Boston Area Gleaners (BAG), letting the group’s volunteers pick more than 71,000 pounds of produce in 2015. Hills was one of the early cooperators with Oakes Plimpton, a farmers market pioneer who founded BAG in 2004.

“If we were going to throw something away, he’d say, ‘I could take that and give it to somebody,’ ” Hills recalls. “Ten or 15 years later, these guys came in and really made it professional.”

“We structure this and build relationships with farmers based on the fact that we’re providing a service to them,” she notes. “If we’re going to provide a service, we are going to do it in the most professional way possible.” 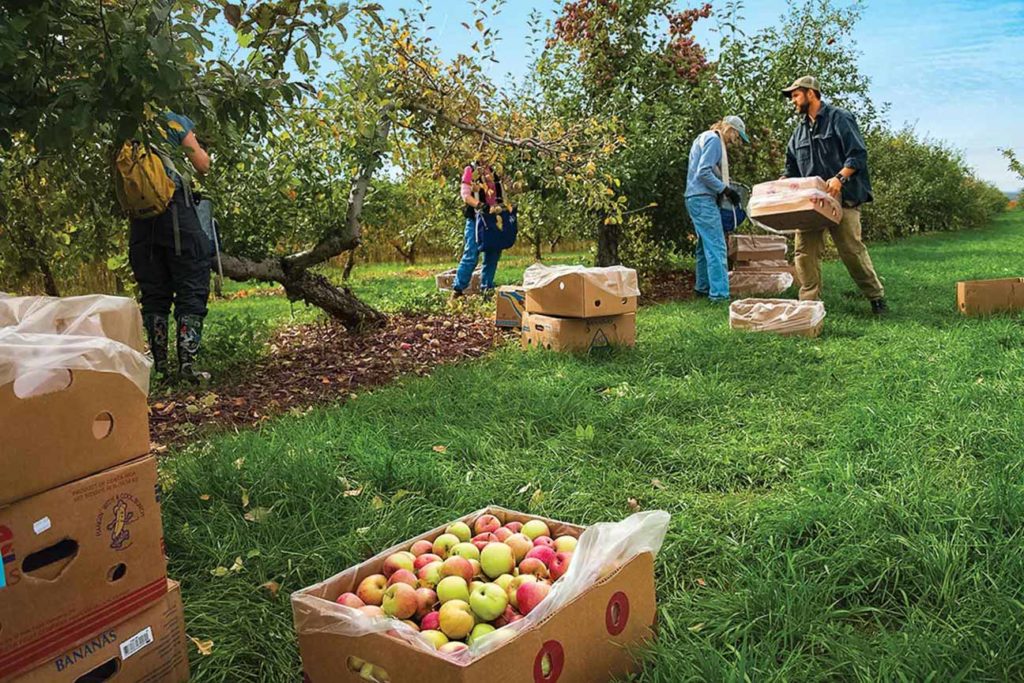 BAG gleaning helps get surplus out of fields, barns, and coolers, and can even keep fields of continuously yielding produce like tomatoes and cucurbits productive during down-cycles in the market, says Caldwell.

“If a farmer utilizes gleaning services right, not only does he get credit for the donation, but he keeps plants healthy and keeps disease out of there,” she says, describing what she calls “summer maintenance” gleaning. “Once the wholesale price comes back, he’s in a good position.”

The gleaning operation has to be farmer-focused, notes Dylan Frazier, who coordinates with farmers and BAG’s list of 1,500 volunteers. Parking, walking through fields and orchards, respecting farmers’ property, and a detailed food safety plan are all important to good grower relationships.

The critical link is making sure every pound of gleaned food is distributed effectively to recipient agencies. Not every food pantry can handle fresh produce, especially by the ton.

“These crops already have a home before we pick them,” Frazier says.

High quality. In 2015, BAG gleaned 364,000 pounds of high-quality produce that simply had no market.

“We’re going for quality,” Caldwell explains. “It’s not inferior product, it’s just surplus. We tell gleaners, ‘pick what you’d want for yourself.’ There’s an important dignity factor for people who use pantries.”

In Oregon’s capital, dignity extends to the process of gleaning itself.

Dick Yates, president of Salem Harvest, says his group’s policy of giving gleaners half of what they harvest attracts very motivated volunteers.

“People that would otherwise be going to the food bank asking for food are able to pick it for themselves and to donate, which puts them into a very different psychological position and contributes a lot to their enthusiasm,” Yates points out.

Salem Harvest started seven years ago with a few neighbors gleaning backyard gardens. Today, Yates coordinates 2,500 volunteers with the GleanWeb software he wrote. He also donates the software to other gleaning groups, helping them schedule gleans, track collections, and even distribute liability waivers to volunteers.

Good business. Fear of liability discourages many farmers and food companies from working with gleaners, though experts say risks are low.

Steve Violette, owner of Dick’s Market Garden in Luneburg, Massachusetts, has worked with BAG since its early days. In 2015, he donated more than 33,000 pounds of fruit and vegetables to BAG — gleaners pick on the farm throughout the growing season and comb through unsold product in the cooler during the winter. He says he feels comfortable hosting gleaners.

“We’re already open to the public,” Violette points out. “We don’t do u-pick, but customers are welcome to go out onto the farm and wander around, so the door is already open.” 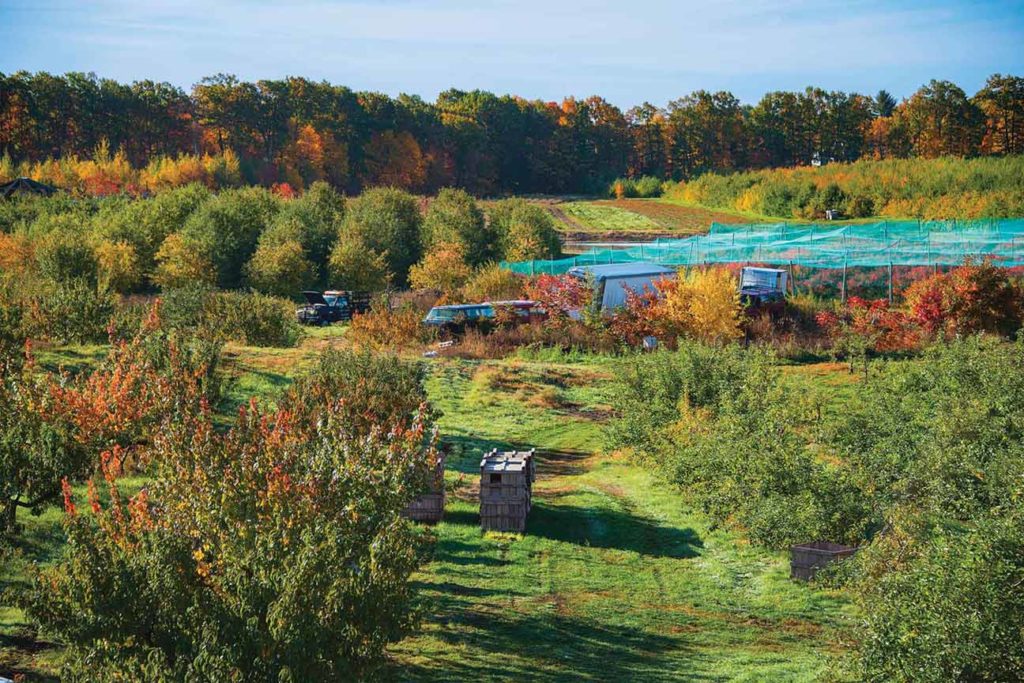 In addition to his own insurance, Violette and other farmers are also covered by the Emerson Act, a 1996 federal law that protects donors, gleaners, and food agencies from criminal and civil liability related to their donations. State laws offer further protection in many areas.

The Vermont Law School’s National Gleaning Project offers a review of state and federal liability laws — as well as details on a new federal tax deduction of up to 25% of the market value of donated produce — online at nationalgleaningproject.org.

Different scales. “Gleaning can happen at a lot of different scales,” notes Caldwell, who acts as a consultant to developing gleaning groups. “One church could partner up with one local farm and provide produce to their local food pantry. It can happen as small as a farmer who knows that a neighbor just lost his job and says, ‘if you need it, come and get it.’ Or you could have Boston Area Gleaners.”

Farmers can connect with an existing gleaning organization or team up with a local food pantry to create their own. The Society of St. Andrew is a good bet in many areas — the ecumenical, faith-based group counts about 33,000 gleaners in its network, which includes affiliates in 14 states.

Mike Hickcox, the Society’s communications manager, says farmers can contact any of those affiliates to arrange a gleaning donation. If there’s no group in the area, the Society offers help creating one. For a start, its Gleaning Guide at endhunger.org offers tips and a step-by-step timeline for organizing a local gleaning project.

Successful gleaning programs operate like marketing organizations rather than giveaway programs. Accounting for the cost of transportation is part of that — the Society of St. Andrew’s volunteers absorb gas bills for drop-offs at food banks, while BAG collects $5 per case from hunger relief agencies to cover delivery and overhead. And produce has to go to people who know how to cook it —BAG’s Crawford sends bok choy to Asian neighborhoods, while Hubbard squash goes to Jamaican families.

On a fall day, Carl Hills smiles as he watches Dylan Frazier’s gleaners at work. He’d invited them in before retiring a block of apples for the fall.

“In the old days, we would have mowed it and harrowed it up,” Hills says. “Now we just call Dylan.”

There’s good news in ag...if you know where to look.