In 1927, Ralph Peer of the Victor Talking Machine Company in New York packed up his equipment, came to the little town of Bristol, Virginia, and put an ad in the paper saying he would have a “recording machine” here for 10 days. He needed local musicians to come and play blues, gospel, and what he called hillbilly music, and he would pay $50 per record side — good money for many mountain people. All they had to do was what they had done for generations — play old-time music.

Peer had recorded “hillbillies” before, as had others, and the records sold well. But performers had to travel to New York to make the recordings, so Peer knew he had just scratched the surface of this music. By coming to Bristol, Peer hit the jackpot. In that first session, he recorded 19 performers or groups, made 76 recordings, and introduced the world to two artists who would become country music legends, The Carter Family and Jimmie Rodgers.

The event would come to be known as The Bristol Sessions. As one music historian said, it was “the big bang of country music” — the start of everything.

Generations old. The two-lane roads wind fiercely in the far southwest corner of Virginia. Here in the Cumberland and Blue Ridge mountains, the lay of the land determines the routes, so the roads are like threads, stitching together the land and communities. On any day of the week—morning, noon, and night— people along these roads will be picking up their fiddles, banjos, and guitars to play country, folk, and bluegrass music. They do it in barber shops, they do it in drug stores. Fire stations and churches, too—anytime, anywhere. The players are typically not professional musicians; they do this because it’s their passion. You can stop and listen; they would like that. The road from which to find it all
is Highway 58 — The Crooked Road. 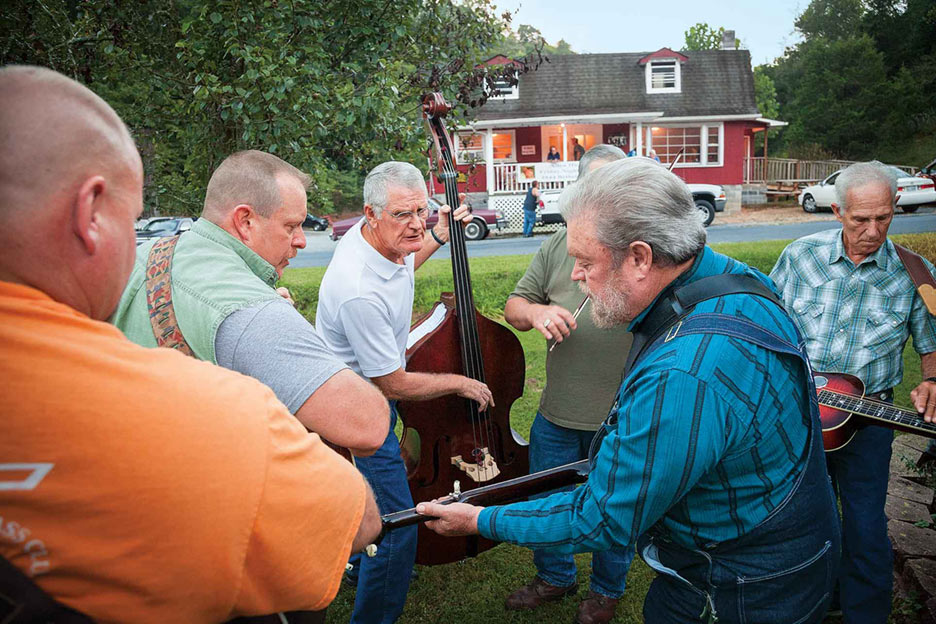 The people here are playing the same music recorded at The Bristol Sessions, music rich in tradition, played for generations by descendants of the Irish, Scots, English, Germans, and others who began settling in these remote mountains before the Revolutionary War. “What you have in the Appalachian Mountains is a culture created by people coming together, and they each bring their traditions with them,” says Jessica Turner, director and head curator of the Birthplace of Country Music Museum in Bristol. “You’ve got the fiddling tradition of Western Europe and British Isles. You’ve got English ballads and African-American and Native American influences. It’s all getting mixed into something that is both traditional but also new.”

The museum is a great way to learn about The Bristol Sessions—and all the music that came before and all the music that followed. It is not so much a museum as it is a learning center, a place to understand the people and how important music has been in their lives. At booths with headphones, visitors can listen to all of the original Bristol Sessions, including the Carter Family singing “The Storms Are On the Ocean,” Jimmie Rodgers singing “The Soldier’s Sweetheart,” and Ernest Stoneman singing “Are You Washed In the Blood.” You can also hear how these recordings influenced contemporary artists. The Tenneva Ramblers recorded “The Longest Train I Ever Saw” at the sessions, but decades later, Leadbelly, Bob Dylan, Joan Baez, and even Nirvana did versions of the same song. At the museum, you can hear them all, one right after the other.

Musical history. The museum is one of nine major venues — places of special importance — on The Crooked Road, the name that co-founders Joe Wilson, a folklorist, and Todd Christensen, a community planner, gave the route 14 years ago. Another major venue is the Carter Fold, 25 miles away, near Maces Springs. Every Saturday night, people gather at this family homesite beneath Clinch Mountain to hear and dance to music played by the descendents of the original Carter family — A.P., Sara, and Maybelle. The Floyd Country store is yet another. Every Friday night it attracts scores to listen to bluegrass, gospel, and old-time music. When you go, count on seeing some Appalachian flatfoot dancing (hard to describe, but it’s similar to clogging).

But the major venues are just the beginning. Dozens of communities hold informal jams on a regular basis, and everyone is welcome. Entry is free, though you might see a bucket at the door with some dollar bills in it; small contributions are appreciated.

“You can get in these jam sessions and form an instant bond with someone you had never met,” says Jack Hinshelwood, executive director of The Crooked Road—and a fine guitar picker who often plays at jams. “It’s a bond that otherwise would take you years to form.”

The people of the music are indeed special. Allen Hicks holds his jam in his garage and workshop, across the road from his house, tucked into a tiny hollow on a narrow road, a place so remote that a first-time visitor might wonder if he will ever find his way out. Dozens of locals come to perform and listen every Friday night. If you play too, you’re welcome to join in, whether onstage, upstairs in the workshop, or out in the yard. 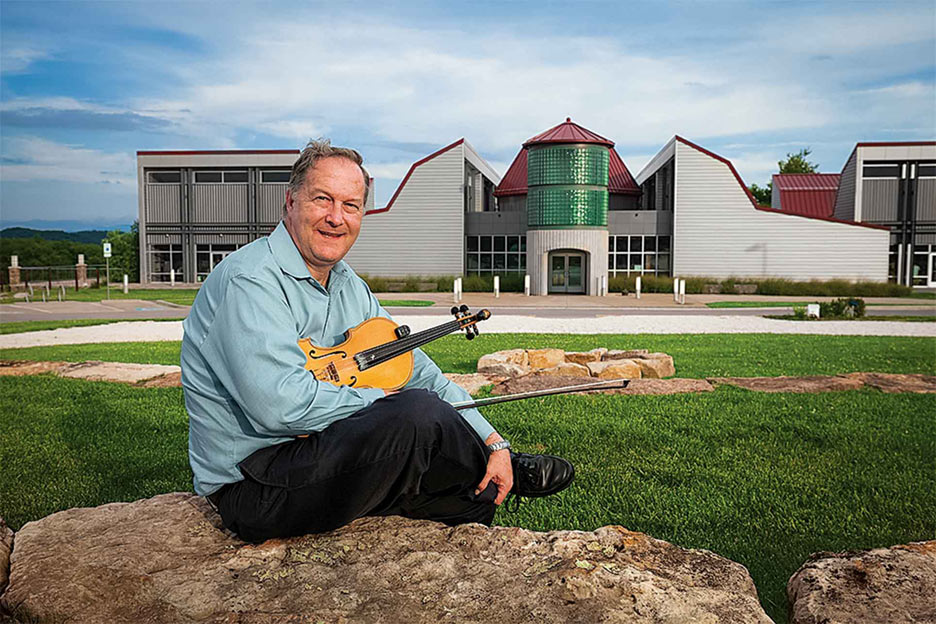 Jack Hinshelwood, executive director of The Crooked Road, says the trail brings thousands of visitors to the area, and contributes millions to the local economies.

Hicks, a retired farmer and steelworker, says it all started when he began to make mandolins. “Some boys would come over and play music, and it got so big we had to move it down to the garage.” The event grew to become a community staple. “You meet many fine people through this music,” he says. “Really, if I didn’t enjoy it, I would have closed the door a long time ago.”

Life on the land was not easy for past generations, and as a balance to that difficult life, the people relied on faith and family, common themes told in the music. Scott Mullins comes from such people in the western part of the state. His great grandfather was a song leader in the Church of the Brethren, a church with roots in Germany, and his grandfather, Hie, was a preacher and a singer. Mullins’s father, Billy Gene, also sang spiritual music, as does Mullins today. “I was just raised in a singing family,” he says. “It’s just been a part of my life. We went to church and the family sung.”

Mullins has a job during the week, but on most Sundays you’ll find him and his group, The New Harvest Brothers, in a church somewhere spreading God’s word. Sacred music became a strong foundation for early settlers and the generations that followed. Of the 76 original songs in the Bristol Sessions, nearly half were sacred songs.

Mullins believes it’s for good reason that music here speaks to people. “Music is the most powerful expression of the human heart that I have ever known,” he says. “It can speak volumes when words can’t. It lays everything out on the table. That’s the great payoff for me — the music is everything.“

Mullins’ father, a coal miner, wrote many songs, most of them in the depths of the mine. One, “Oh What a Blessing,” can bring tears to those who hear it. “I’ve often thought, ‘Daddy, how did you write a song about hope in such a dark, hellish place,’“ says Mullins. “But that’s where we find strength in our faith — when we’re in our darkest places.”

Pride of place. Just a few mountains away from Mullins is Tyler Hughes, a smart, thoughtful 23-year-old banjo player whose
talent could take him anywhere, but he’s staying put. “I’m proud to call myself a hillbilly,” he says. “Much of the nation might think of the region as full of moonshiners and hicks, but it’s not the case. We are very hard working people. We mean what we say, and we like to take care of each other. We are hospitable. We care very much about our traditions, but we also care very much about the future, and we are always pushing to make that better.”

One of Hughes’s inspirations is Dock Boggs, a man who played banjo in the mid-1920s. Hughes considers him unique because Boggs, a white man, readily gave African-Americans credit for how he learned his bluesy banjo style. “Country music’s history is not always very accurate,” says Hughes. “Boggs is one of the first musicians who acknowledged that black artists influenced him.”

On the eastern side of The Crooked Road is Wayne Henderson. He grew up poor on his family’s farm, but the life was rich in music. “I can’t remember a time when there wasn’t music in my family,” he says. Wayne earned a living farming and delivering mail, but when he wasn’t doing either of those, he was learning how to build guitars. Henderson, who still lives where he grew up, Rugby, Virginia, is one of the best luthiers in the nation. Eric Clapton plays one of his guitars. So does Vince Gill. “There are a lot of builders out there who are great luthiers, and can build beautifully hand-crafted, one-of-a-kind instruments,” says Gill. “Wayne has always been at the top of the heap. He makes magnificent instruments.” 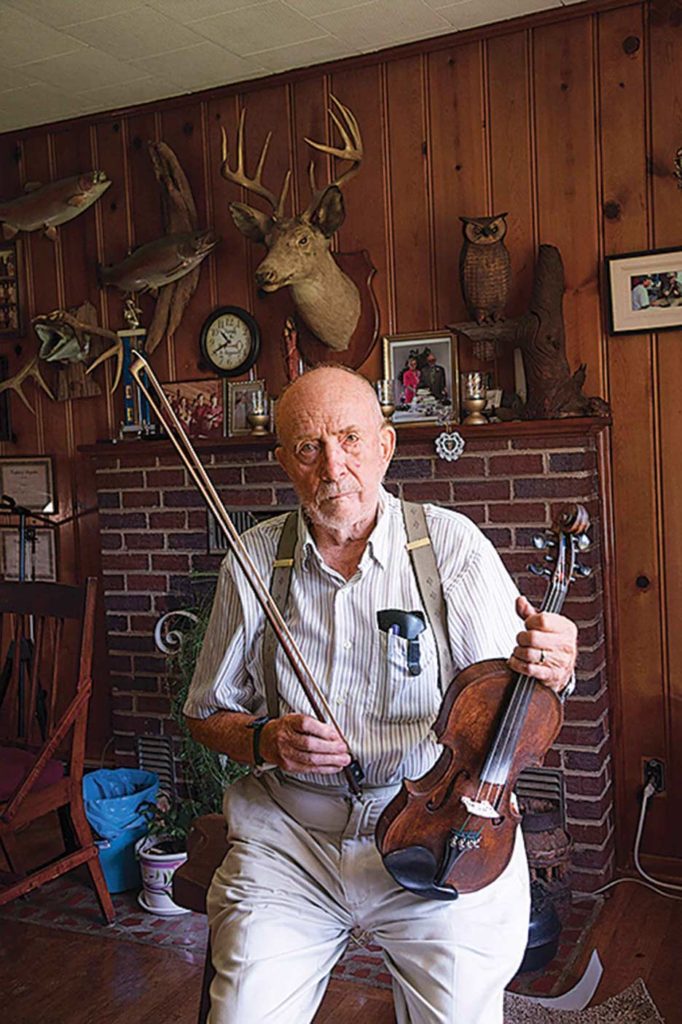 And near Floyd, Virginia, on Conner Road, is Arthur Conner, who lives in the house he built from lumber he milled on his farm. Conner is well known for the fiddles he’s crafted over the years. (It’s OK to call them violins, he says; there’s not a whit of difference between the two.) He doesn’t know how many violins — and mandolins and violas and basses —he’s made over the years, but he’s proud of his work. He made a five-string fiddle just for Ricky Skaggs. At 92, Conner knows he’s coming close to the end of this life on Earth. And yet, he has a violin he’s still working on.

The people here will surprise a visitor. Just as young banjoist Tyler Hughes says, if you come, don’t expect to find what the media portrays. Instead, expect surprises. Conner, for instance, says he always loved the bluegrass music he heard growing up. He listened to nothing else. “I thought people who liked classical music were snobs.”

Then he puts a CD into his small stereo and sits back in his chair. Music begins. It’s a viola, playing the Ave Maria, a classical piece composed by Franz Schubert in 1825. For four minutes and 27 seconds, Conner is silent, listening to the calm spiritual music as he watches hummingbirds flicker in the summer sun outside of his front window. When the music is finished, he says, “I think that’s the most beautiful music.” The violist is Chris Sexton, playing an instrument crafted by Conner.

“It’s good to be part of the music world,” he says, then holds up his hand and squeezes his thumb and index finger close together. “I feel I’ve got a place in a small corner of it.”

Looking back to the Big Bang of country music.