There’s a lingo that scientists use to describe the work they do behind laboratory doors. For example, you may be familiar with the term in vitro, which typically describes an experiment done in a test tube.

Get ready for a new term called in silico; that’s the phrase for research based on computer simulation. It’s the driving force behind some interesting developments from an international research project called Realizing Increased Photosynthetic Efficiency (RIPE). Headquartered at the University of Illinois, RIPE taps into the world-class supercomputing facility on that campus to help identify bottlenecks in the photosynthesis process.

“In theory, crops should be able to turn 10% of the visible light energy they receive into biomass,” says RIPE director Steve Long. “Our best crops today are only about 1% efficient. There is a great opportunity for improvement if we can solve some of these bottlenecks in photosynthesis.”

Fewer leaves. Computer analysis suggests some solutions that are a bit unusual — but are showing positive results in the field. Model simulations, for example, suggested that the soybean plant overinvests in leaves; the computer suggested that a soybean plant with approximately 30% less leaf area could produce up to 10% higher seed yield. Researchers put that theory to test under field conditions, reducing leaf area using a low-tech approach — they used scissors to cut off some of the emerging leaves. 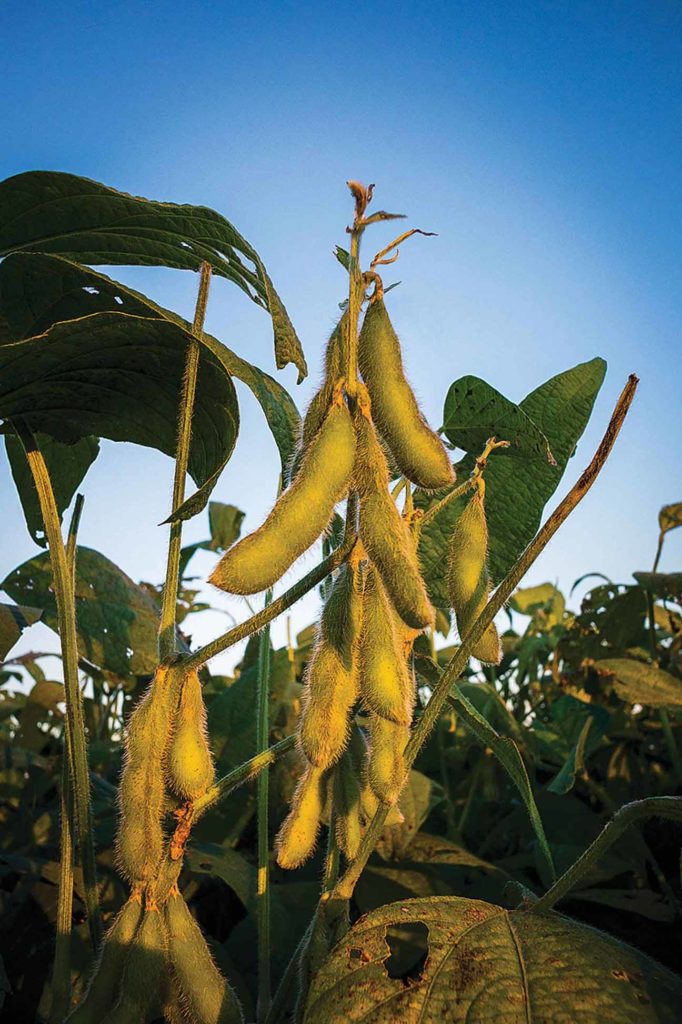 Computer modeling suggests that soybean plants overinvest in producing leaves, using resources that could be turned into yield.

They trimmed back leaf area by 5% and produced a statistically significant 8% increase in yield. This could have additional significance in coming years, as plants typically add leaf area in response to increasing amounts of carbon dioxide.

More opportunity for improvement can be found in the way light energy interacts with the crop canopy. While light is the driving force behind photosynthesis, too much light can cause damage.

One mechanism plants use to defend themselves against high light intensity is called non-photochemical quenching (NPQ). Like a pair of transitioning sunglasses that darken when exposed to sunlight, NPQ goes into action quickly in bright sunlight. NPQ isn’t so quick to “clear up” when light intensity drops. “We are looking at ways to speed up the relaxation of NPQ after this transition from high to low light intensity,” Long says. “That would allow a faster recovery of photosynthetic quantum yield.”

Using tobacco as a test crop, researchers boosted levels of three proteins that speed up the plant’s recovery from the NPQ photoprotection. The modified plants were 14% to 20% more productive than their unaltered counterparts when compared across replicated field studies.

With this success, researchers are now working to transfer the concept from the tobacco test crop to food crops such as rice, cassava, and cowpea, which are important resources for many people across the globe. Long points out that the process also is being studied in maize.

Food security. Scientists have been working diligently for 50 years or more to unlock the process of photosynthesis. “It is one of the most studied processes in plants,” Long points out. “We know it in detail.”

Using that knowledge feeds the models that allow computers to find bottlenecks; solving those bottlenecks has a sense of urgency. Experts project that feeding the world in 2050 will require at least 70% more food.

“This increase in food supply is a massive ‘ask’ of agriculture,” says Murray Badger, a RIPE team member who studies the photosynthetic process at Australian National University. “Conventional breeding techniques simply cannot deliver this increase in the supply of food for the world.”

Long expects to see a variety of approaches — from conventional breeding to genetic engineering to genome editing — put into use as the needed “tweaks” to photosynthesis find their way into food and commodity crops.

RIPE continues to make detailed study of complicated systems behind photosynthesis, involving such things as the enzyme Rubisco and the Calvin Cycle — things you may have studied (and forgotten) in a plant science course during your college days.

What’s important, Long says, is to think of photosynthesis as a complicated assembly line, employing a thousand people. “Using the in silico approach allows us to study the underlying assembly line and to identify the inefficiencies; once these points are identified, it is a matter of rearranging resources so those ‘people’ are producing at their maximum ability,” he says.

“I think this approach can help double productivity in a reasonable time frame,” Long adds. “That’s a big step toward feeding the world.”