There was a time in ancient history when mysterious fellows called “alchemists” retreated to dark caverns where they stooped over cauldrons in a quest to find a formula that would turn lead into gold. For today’s agricultural alchemist, what glitters is not gold, but green—as in the “green,” bio-based products that drive an emerging economic frontier.

“Sustainability is a really important part of this new bio-based economy,” says Richard Dixon. He leads agricultural alchemists at the recently launched BioDiscovery Institute located at the University of North Texas.

Researchers at the institute study the basic science that allows better use of plants and forest products in biopolymers, new bio-based materials for construction and transportation, and bioactive small molecules and biofuels. Projects at the institute range from the study of lignocellulosic biomass—with the goal of producing ethanol from crops such as switchgrass and poplar trees—to producing more value from an existing crop such as cotton, by extracting fiber from cotton plant stems that can be used in making composite materials.

“Many of the breakthroughs that are on the horizon are at the interface of biotechnology, genetic engineering, and agro-ecology,” Dixon adds. For example, scientists are trying to use all the modern tools of genetics to rapidly evolve plants such as poplar or switchgrass by simultaneously changing a number of important traits.

“Researchers now realize that the microbes that grow in the soil around plants have major impacts on the sustainability of those plants,” he says. “The genetics of the plants actually help control the nature of the microbial community. This can impact the sustainable characteristics of the plant, such as its water use and nitrogen use. Technology can help us develop crops that have a favorable carbon balance and energy balance.”

Need for speed. An old saying points out that there is a fine line between genius and insanity. As the chief executive of Corn Board Manufacturing Inc., agricultural alchemist Lane Segerstrom sometimes blurs (or perhaps crosses) that line.

Back in December 2010, Segerstrom hopped aboard a skateboard made from his company’s composite building material comprised mostly of corn leaves and husks pressed together with a chemical binder. He grabbed hold of a speeding SUV and set a Guinness World Record by rocketing to a speed of 78.1 miles per hour.

“I suppose that sounds like a pretty crazy thing for a guy in his 40s to be doing,” Segerstrom says. “But I am a competitive guy, and when I found out there was a speed record for towed skateboards, I was determined to break it—and prove that our Corn Board product could hold its own.” 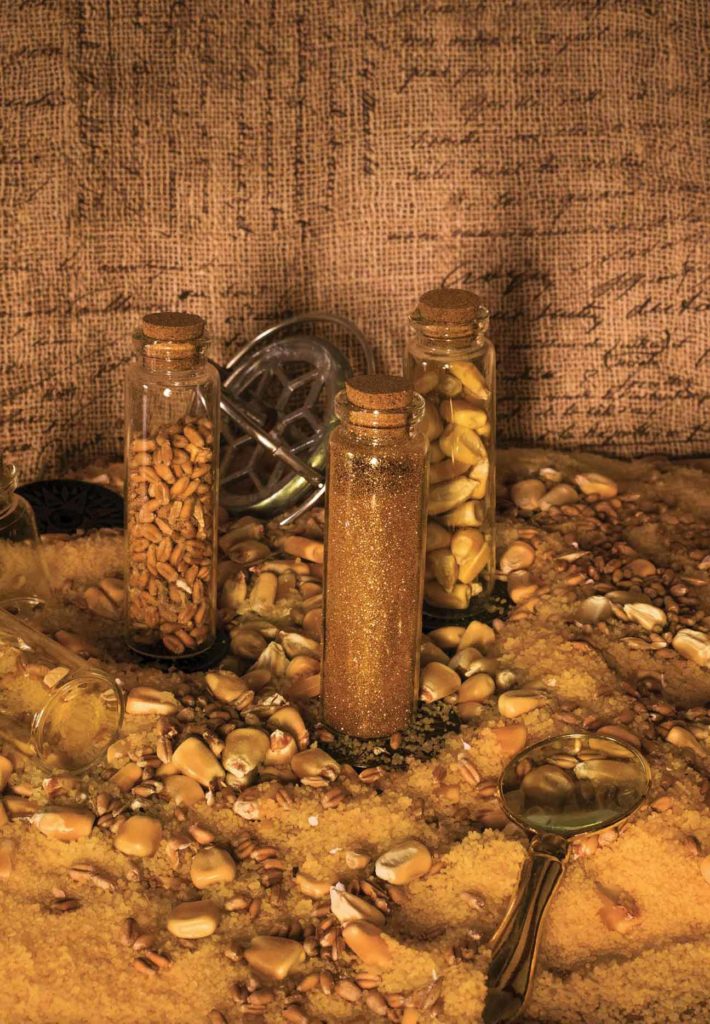 Now the company offers a complete line of sports boards sold as the Stalk It brand. Whether riding the waves in Maui, carving snow on a Colorado mountainside, or showing skateboard skills in a California park, young people are catching on to the environmentally friendly ways of the CornBoard—and winning medals on the awards stand as well.

CornBoard provides the core of surfboards and snowboards, and the ability to engineer each part of the core to exact stiffness and flexibility requirements offers an advantage. But Segerstrom wants to bring the CornBoard sustainability story to other markets that, while perhaps not as exciting, may prove more important.

“We’re working with other partners in markets such as furniture, where our product can offer a competitive advantage. We also offer the only USDA Certified BioBased pallet. About half the hardwoods that are harvested each year in the U.S. are used to make pallets,” Segerstrom says. “We’re offering a pallet that is made of 100% CornBoard, using bolts and screws instead of nails so they can be repaired and maintained over a much longer period in the market.”

Oil boom. There’s a new fall-seeded crop showing up on the rolling Pennsylvania hills at Sterman Masser Potato Farms. It’s Brassica napus, which doubles as both a cover crop and a cash crop in the farm’s crop rotation.

It’s basically the same plant species as canola, but the oil profile is different. The seeds from this version are crushed to produce high erucic acid rapeseed (HEAR) oil. Canola oil for human consumption typically contains less than 2% erucic acid; HEAR oil varieties contain up to 55%.

The Masser farm is growing its HEAR crop on contract with Perdue AgriBusiness. Perdue agronomist Andrew Smyre says the crop is finding rapid acceptance, now being grown not only in the Delmarva but in many Southeastern states as well.

“We like to get it seeded a couple of weeks before a grower would typically start planting winter wheat,” Smyre says. “It fits well after an early potato crop or corn silage. There’s plenty of demand for the HEAR oil, so it looks as if this crop will be providing a big opportunity into the future for growers who want to diversify rotations.” 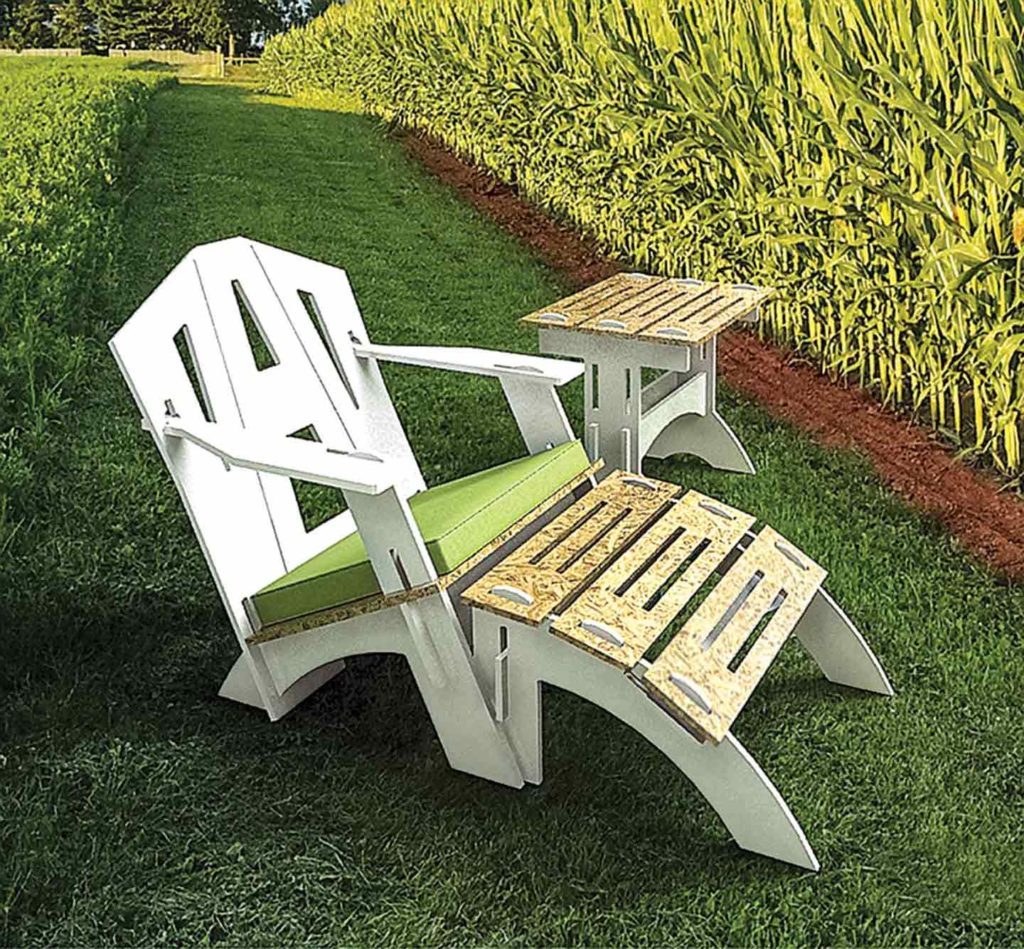 Composite material made from corn stover can be used to build sports boards, furniture, and other items.

For many years, industrial users have replaced petrochemicals with soy derivatives to produce more environmentally friendly products. The United Soybean Board points out that Henry Ford and George Washington Carver shared a vision of using soybeans to make plastics, paint, and fuel. Today, BioBased Technologies is a company that relies on soybeans and technology—developed with USB research support—to help industrial users make the transition to bio-based ingredients. The company introduced its soy-based Agrol polyols line to the market in 2005, with many designated as USDA Certified BioBased Products. A life-cycle analysis found that every pound of Agrol soy polyols replacing petroleum prevents 5.5 pounds of CO2 equivalents from entering the atmosphere.

Sourcing straw. There are a number of efforts underway to try to incorporate wheat straw into consumer products. Kimberly-Clark has announced its GreenHarvest line of tissue paper and paper towels. These products use 20 percent plant fiber to replace tree fiber or recycled paper.

A product called StepForward paper is available in Staples stores in the U.S., manufactured from straw in India. Hollywood actor and environmental activist Woody Harrelson has been both spokesperson and primary investor in the company that manufactures this copy paper.

His vision has been to build a paper mill on the Canadian prairies that would use wheat straw as a feedstock, but economic setbacks have prevented that effort from going forward. His company has announced plans to complete a feasibility study in coming months, hoping to attract investors.

BioDiscovery Institute researcher Dixon points out that many bio-based products face economic hurdles as they compete with established products. “As I scientist, I see many opportunities for bio-based products,” he says. “The challenge is to improve production efficiencies so these products can compete economically.”

Wheat Montana is anything but a simple wheat farm.