In 2010, researchers at the University of California, Davis, published results of chemical and taste tests indicating the long-favored extra virgin olive oil from many European producers did not always deserve accolades. Greater than 50 percent of European extra virgin olive oils were compromised by oxidation and contamination from cheaper oil, and “damaged by overripe olives, processing flaws, and/or improper oil storage,” according to the report, titled “Tests Indicate That Imported ‘Extra Virgin’ Olive Oil Often Fails International and USDA Standards.”

Meanwhile, in a slender valley in Northern California’s Blue Ridge Mountains, the Yocha Dehe Wintun Nation had already planted Arbequina olive trees. In 2011, the tribe milled an inaugural batch of premium extra virgin olive oil made from the fruit of those Capay Valley trees.

“It was exciting,” says the tribe’s director of land management, Jim Etters. “It tasted very good.”

That was the seed of an ambitious crops-to-market vertical integration strategy for growing food sustainably while maximizing income. Since other olive producers nearby were also making plans to expand their groves, there was no time to waste.

Bold Decisions: Raised in Yolo County, Etters began working with the tribe in 2003 just before it opened a $200 million expansion of its 1985 Cache Creek Casino. The tribe wanted to develop a sustainable agriculture enterprise; Etters presented the tribal council with an idea.

“At that time we had a large chunk of land across the highway from what’s now the casino, and we were leasing that to tenant farmers,” he says. “As we acquired more land, it made more sense for us to farm in-house. There were two reasons: one, it made economic sense, and two, probably more important, the tribe wanted to have control over its homeland.”

The tribe now owns 15,000 acres in western Yolo County, upon which it manages 600 head of Angus cross cattle and raises 15 to 16 different organic and non-organic crops. The tribe grows olives for olive oil, grapes for estate wine, and bee pollen for dark amber wildflower honey. Although it sells most of its cattle at auction, it finishes and processes some locally to sell as prime cuts, beef sticks, and jerky.

Etters does not under-rate the importance of the project’s timing.

“It seems like it’s happened quickly, but when we first started the operation I was the guy driving the tractor and planting the seed,” Etters says. “Once we got the farm generating revenue, we started looking at ways to diversify and vertically integrate.”

The tribal council sought a brand name that would reflect its 4,000-plus-year heritage in Capay Valley. “‘Seka’ is Patwin for ‘Blue,’ and the Blue Ridge Mountains are right on the west side of Capay Valley,” Etters says. “They wanted a brand name that connected the Patwin language and the land.” They launched the Seka Hills brand in 2011.

To produce the best extra virgin olive oil, you have to reduce the oil’s exposure to oxygen, light, and heat, Etters says. “I started looking for olive processing facilities nearby and learned there weren’t any. The growers were trucking their fruit to Corning or Stockton — hours away — to have it processed. They picked it up from there and took it to another location to store. Then they took it to another location to bottle. Finally, it ended up back on the farm as a finished product. That seemed labor and transportation intensive. The tribal council said, ‘Why don’t we look at building our own facility?’ I said ‘All right!’”

They bought an Italian-made Alfa Laval mill with a 3.5 tons-per-hour capacity, opened it in 2012, and made it available to the other olive growers in the region. 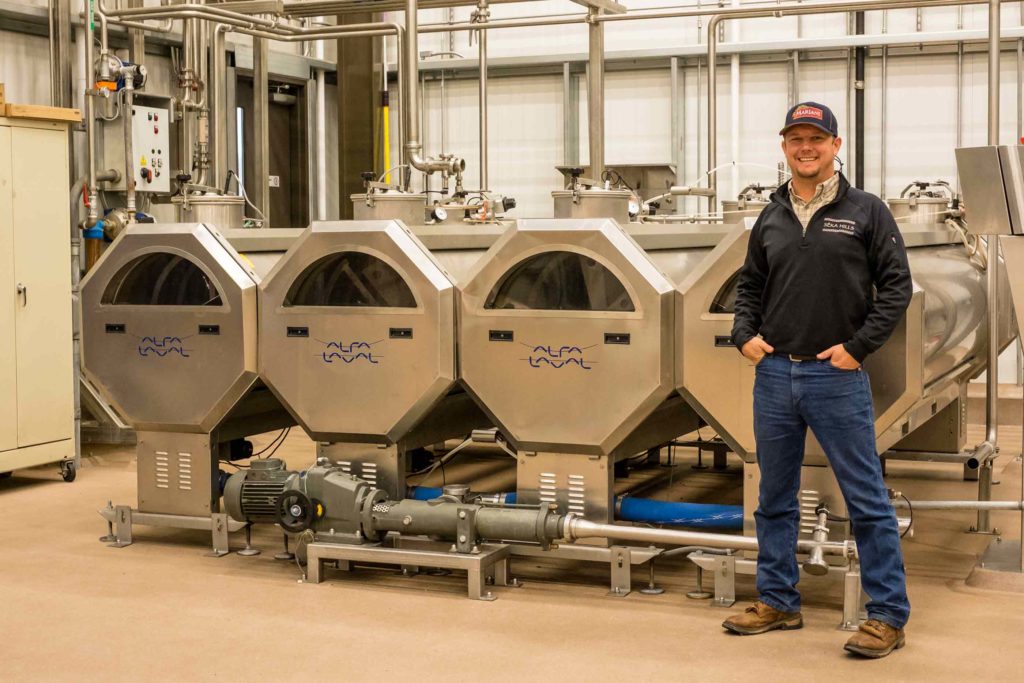 The tribe purchased an Italian olive-oil press; in addition to pressing their own oil, the tribe makes their equipment available to other olive growers in the region.

The Market: A big key to a successful vertical integration plan was having a large existing market close by and an additional potential market that could be tapped.

The close by part was easy enough. Sacramento has been calling itself the Farm-to-Fork capital for some time, its chefs eagerly promoting Central Valley and Sierra Nevada foothills ingredients on their menus. Ninety miles to the southwest, San Francisco has a abundant restaurants and a food-loving population willing to pay more for fine olive oil grown nearby.

Still, getting the product to decision makers was hard work in the beginning. “We had a strategy for knocking on doors,” Etters says. “It revolved around what we considered to be local high-end retail chains and independent grocery stores, from Santa Cruz to Marin and everywhere in between.”

“In the first six months, we made about 40 placements,” Etters says. “That was exciting. It caught the attention of a distributor in South San Francisco, Italfoods. Once they brought us on board, it really blew up.”

The premium olive oil and other Seka Hills products are distributed in 700 locations, Etters says, including an acclaimed restaurant called Preserve in the nearby ag-chic town of Winters, and Alice Waters’ celebrated Berkeley restaurant Chez Panisse.

Taste Experience: Once Etters proved to the tribal council that he could make and sell the oil (in year one, production sold out, he says), the next step was teaching potential new buyers how to identify and enjoy boutique extra virgin olive oil. A new tasting room would serve that goal. The 14,000-square-foot building opened in 2014.

Designed with floor-to-ceiling interior windows opening into workrooms filled with shiny tanks and powerful centrifuges, the tasting room has a long bar where customers can sip, slurp, and enjoy the scents of Seka Hills premium olive oils and estate wines. Surrounding it are plenty of displays packed with Seka Hills products to buy, including honeyed almonds, premium and single variety olive oils, estate wine, gift packs, the wildflower honey.

As focused as it is on its production centers, the tasting room’s interior design also directs a person’s attention outside through exterior windows, where the Yocha Dehe Wintun Nation land rolls toward the blue-shadowed mountains that lent the brand its name. 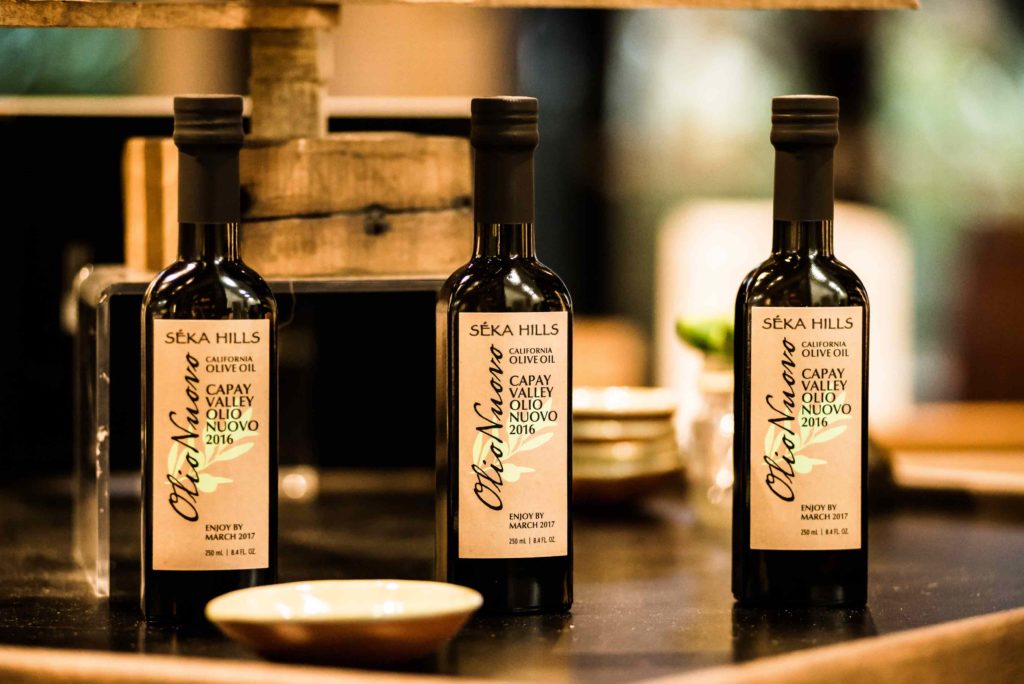 The undulating terroir is perfect, Etters says. “It’s not soil in which you’d want to grow row crops or vegetables,” he says. “Even nut crops don’t do so well. But it’s very conducive to growing very good olives, because olives love poor soil. They also use a lot less water than any other crop. We’re using less than half the water we would use to irrigate an almond or a walnut.” This makes the drought watchers of California happy.

“The other thing that olives love, which can be challenging for other crops, is the heat,” Etters says. “And here in the Capay Valley we don’t get that coastal influence that they do in the Sacramento Delta, or down the road in Vacaville and Fairfield, or right over the ridge in Napa Valley. We’re like an oven in this valley; it gets really hot, which intensifies the flavors in the oil.”

It seems he’s on a winning streak.