Spires of purple blooms burst forth on three- to five-feet tall plants on large expanses of the eastern North Carolina landscape. Up close it’s a beautiful plant that often attracts bouquet pickers, until they are overpowered by its pungent aroma. From a distance, it’s a sea of purple, adding an unexpected punch of color to the farmland tapestry known for tobacco, cotton, peanuts, wheat, corn, sweet potatoes, and soybeans.

Clary sage is the specialty crop that lends beauty to the landscape, stability to farmers’ crop portfolios, and an ingredient to fine perfumes and household products such as laundry detergent and fabric softeners that give scents staying power.

Chris Cobb and Blount Knowles are two farmers among about 120 in the region – and the entire United States – growing clary sage. In early June, Cobb and Knowles survey the soon-to-be-harvested crop that extends from the operation hub of Cobb’s farm to the far horizon.

“It put us a step ahead of other farmers,” says Knowles, who farms 400 acres of clary sage along with 1,100 acres of soybeans, cotton and wheat. “It’s tough right now in farming. We had the gravy years and now we are going back to a little leaner period. It’s a great benefit to have it.” 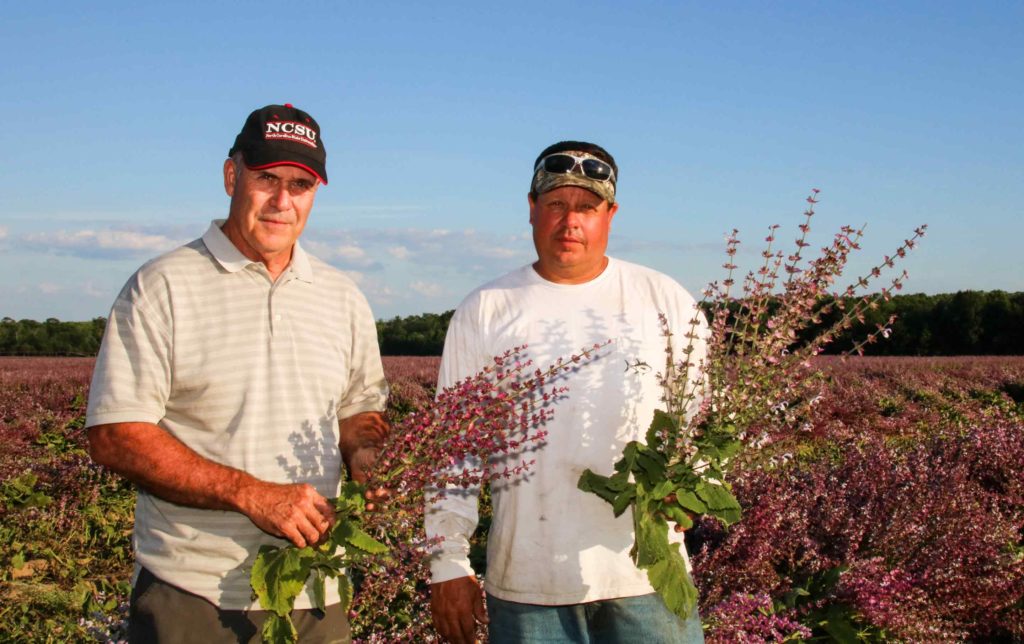 From the Field to Extraction to Products

If fields of purple come as a surprise in eastern North Carolina, so, too, does the global bioprocessing company, known as Avoca. Located in Merry Hill, a crossroads with a few houses and a post office, Avoca is responsible for the region becoming the center in the United States for clary sage production. It’s the only region of the United States where clary sage is grown, other than Avoca’s seed farm in the Willamette Valley of Oregon.

Dr. David Peele, president of the company, and Guus Gerritsen, director of sales and marketing, place small cosmetic containers and a box of Tide laundry detergent on a conference table. These are the props for a company overview that interweaves science, chemistry, biochemistry, and the history of fragrances which extends back to the early Greeks.

The company extracts a prized compound known as sclareol from the sage plant. It then uses a yeast cell for the bioconversion process, which is done at a facility in Menomonee Falls, Wisconsin, to reduce the sclareol compound to sclareolide. The process changes a 20-carbon compound to a 16-carbon compound, which transforms a wax-like substance to crystals. Avoca then purifies the material and recrystallizes it.

The purified crystallized substance is what Avoca sells to fragrance companies in Europe, which uses it to produce a fixative that helps scents last longer. The fixative is added to products ranging from fine perfumes to laundry detergents and fabric softeners. It’s a big business.

“Wander down the aisle of laundry detergents and fabric softeners in any grocery store and all of the top brands are going to have our product in them,” says Peele.

To illustrate how the product holds scent, Peele opens a small cosmetics tub. “This product is probably 25 years old,” he says as he takes a sniff to demonstrate that it’s safe for others to do so. “It has a nice, clean, fresh smell. It’s sought after by the fragrance industry. For all practical purposes we are the only producer of this product in the world,” Peele says.

It All Started with Tobacco in North Carolina

Ironically, while clary sage has replaced tobacco, another high-value crop, on some of the region’s farms, the roots of this crop and the extraction facility extend back to the R.J. Reynolds Tobacco Company.

In the 1960s, R.J. Reynolds wanted to replicate a Turkish tobacco flavor. The plan was to grow clary sage for the purpose of using sclareolide as a starting point, says Peele, who worked for the company from 1978 to 2003. The company embarked on growing its own crop and contracting with a few growers but by the mid-1960s abandoned the project. The extraction plant was mothballed.

In the mid-1970s, a German company approached R.J. Reynolds about getting back in the clary sage business to produce sclareolide, an essential ingredient in ambroxide, a fixative used in the fragrance industry. The product is the substitute for ambergris, a byproduct from sperm whale digestion that is still used in high-end perfumes. Ambergris, sometimes called grey amber, is a dark grey or black blob that often washes up on the seashore. It has long been prized for a seemingly unlikely use in fine perfumes. As far back as the late 1600s, it is noted in literature for its trade appeal for those seeking fortune. Herman Melville’s Moby-Dick, published in 1851, includes a chapter about ambergris.

A combination of factors contributes to the need for the clary sage compound to replace ambergris: the sperm whale’s endangered status and the demand for a fixative for a multitude of products. “There is not enough ambergris produced naturally to be able to supply the fragrance industry,” says Peele.

When R.J. Reynolds divested of the extraction facility in early 2003, Peele and a partner bought the company and continued the name Avoca, which was part of a New Jersey company known as Pharmachem Laboratories. Earlier this year, Avoca was purchased by Ashland Group Holdings, a $3 billion specialty ingredient company. While clary sage and its resulting product happen to be Avoca’s largest, the company also extracts other compounds from other plants for the dietary supplement industry. 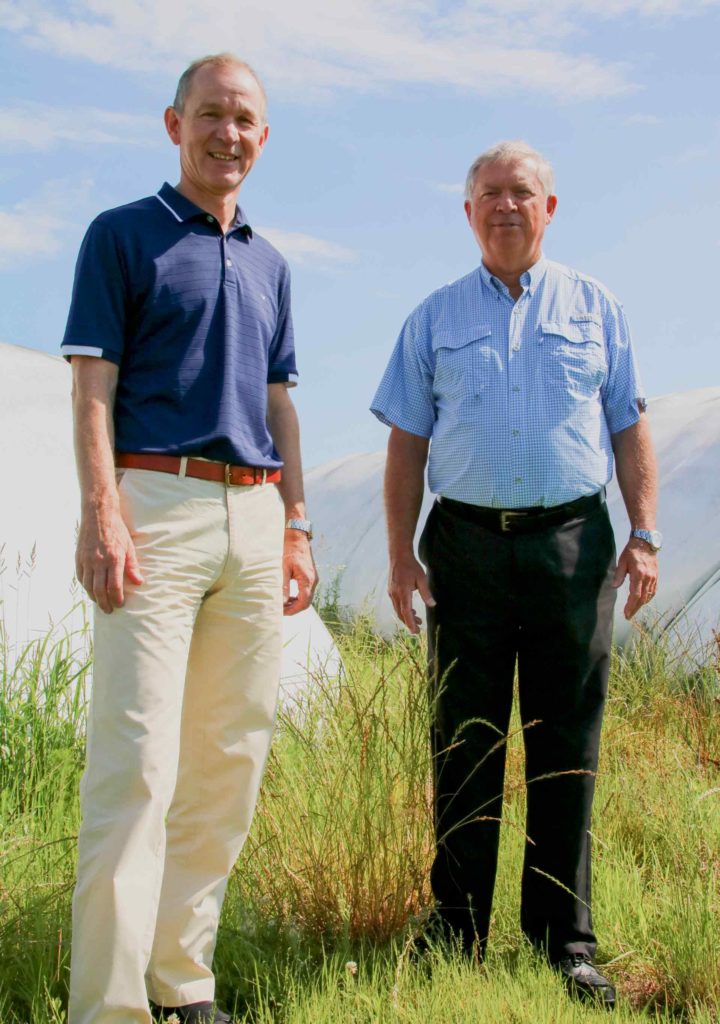 From 50 to 100 acres of clary sage in 1980, the company is now contracting with the region’s farmers to grow 25,000 to 30,000 acres. Proximity to the extraction facility in Merry Hill is critical so the stretch of land growing clary sage extends about 20 miles north and 20 miles south of Merry Hill and 75 miles west to Rocky Mount.

“Today we are currently on a high because of laundry detergents and fabric softeners,” Peele explains.

The Most Beautiful Commercial in the World

A television commercial currently running nationwide for Gain Flings laundry detergent touts its long-lasting scent. It shows a man played by actor Ty Burrell from the TV show Modern Family on a beach holding a green scarf. “Why am I so devastated . . .ly  . . . handsome?” asks Burrell. “I’m in a fragrance ad and my sweetheart has gone sayonara. This scarf, all that’s left to remember her by . . . “ He raises the scarf to his nose and then exclaims, “What! She washed this like a month ago. How’s a guy supposed to move on!”

“That is because of this product right here,” says Peele, holding up the small container. “That is because Merry Hill, North Carolina, grows clary sage. It is the most beautiful commercial in the world as far as I’m concerned. It is what has driven our business. Obviously fine fragrances and men’s aftershave is a nice business to be in but it’s not high volume. What is high volume is laundry detergents and fabric softeners. It’s a very unique business and we have a good market share on producing this product.”

Avoca has five customers in the world, all European, who use sclareolide to produce their own fixatives and then sell to companies worldwide, including household product powerhouses such as Proctor and Gamble and Unilever who use the product in their flagship brands.

“Clary sage is a desert plant so it likes well-drained soil, which we have a lot of in this area because of sandy-textured soil,” says Tim Smith, agronomic manager for Avoca. “Historically, this has been a tobacco-growing region so sage fits well on the same land.”

As Smith drives along farmland not far from Avoca’s extraction plant, he looks over fields that are nearing harvest, which starts in early June and extends to the end of the month. This year’s crop was planted last August and overwintered as a rosette. It resumed growing in the spring.

When the plant is in full bloom, the entire plant is cut into windrows where it will be left to dry to a specified moisture content.  A forage harvester with a pick-up header will pick it up off the ground, chop it up, and blow it into a cart or trailer to be transported to Avoca.  Upon arrival, several samples are taken from each load and analyzed for sclareol content, which determines the payment to the farmer. The sage, which now looks like cut silage, is bagged in giant 12-foot x 500-foot-long plastic bags typically used for corn silage or haylage where it can be stored for up to two years without quality loss.

Cobb and Knowles are keen on the crop for several reasons. They acknowledge the difference the crop has made to farmers in the region. “It’s probably saved a bunch of them,” says Cobb, who farms 500 acres of clary sage along with another 1,250 acres of peanuts, soybeans, wheat, and hemp. He also has six poultry houses and harvests the sage crop of four other farmers. “It’s just a better cash flow crop. I’d compare it to peanuts. It’s much better than soybeans, corn, wheat.”

“It meant keeping the farm,” says Knowles as he speaks of the greater risks with other crops, such as cotton, that include technology fees and greater seed costs. He cites a learning curve as one of the challenges he encountered when he first started growing the crop five years ago.

“It’s so totally different from what we are used to,” he explains. “We’re used to planting corn two inches deep and clary sage, which has tiny seeds, is planted somewhere between an eighth and a quarter inch deep. To do that, you have to have your planters almost perfect.”

“We are always trying to find better ways to manage the crop,” says Smith. “We rely on collaboration with growers. We have a wide range of different growing conditions so if you are trying to manage certain issues – weeds, pests, deep sand and chemicals – you have to go to that field that has those conditions to test. We have farmers across the region and they are good to work with to promote further understanding of the crop.”

Much of the clary sage crop grows along Highway 64 that is a major road connecting a large portion of North Carolina’s population to the Outer Banks and its beaches. Every year, there’s a new crop of tourists who discover the purple, pink, and white sage fields, and a few always stop for a bouquet. Any conversation about clary sage includes the stories about the flowering tops that someone has picked for a bouquet and then thrown out their car window just a few miles down the road due to the overpowering scent.

“It happens every year,” says Peele. “But get a little sage oil on your clothes and then wash them and you will have the most pleasant smell that you’ve ever had.”