Small grains and oilseed producers have joined the container revolution. A vanguard of grain farmers on the Canadian Prairies are partnering with grain companies to fill containers with a variety of oilseeds and pulse crops and ship them to end users around the world. This lowers shipping costs by reducing the number of times the crop has to be handled and opens up new marketing opportunities for farmers.

Freight of all kinds has been shipped in standardized, reusable, intermodal shipping containers for more than sixty years. Since containerization eliminates the time and expenses involved in repacking a cargo every time it’s switched from a truck to rail or boat, it has dramatically reduced the cost of shipping goods.

Small grains normally have been moved as bulk shipments, so containers haven’t had as much of an impact. However that’s changing as farmers improve their grain handling facilities, and traceability becomes more important to end users. 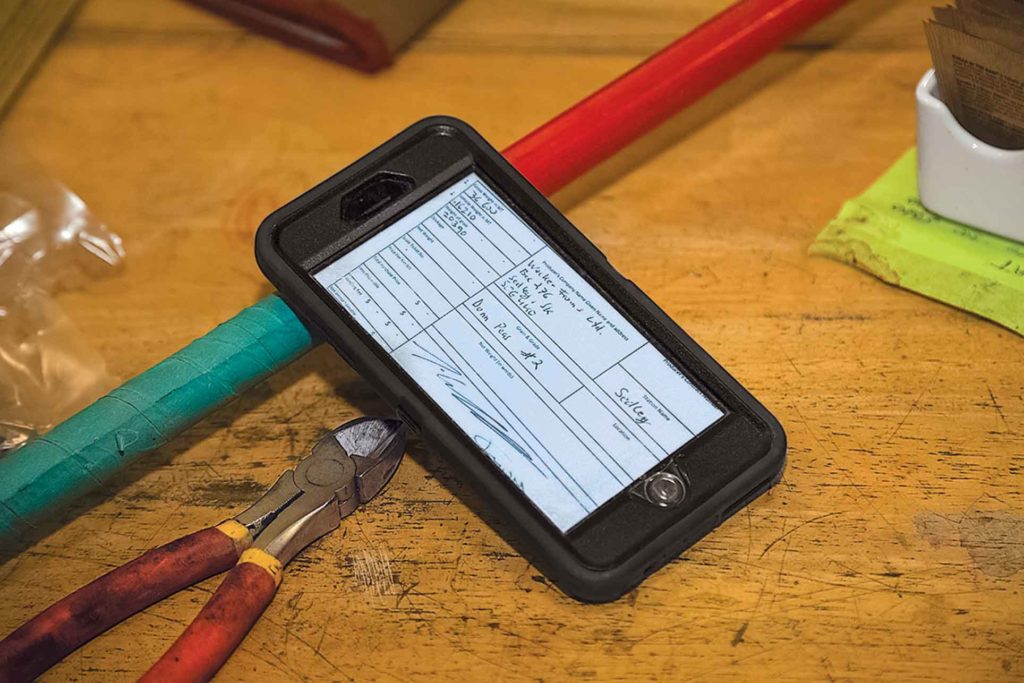 Wecker photographs his grain receipts with his smartphone to have them easily accessible.

Joe Wecker has been shipping containers of flax, dun, and maple peas to end users in Indonesia and China from their 11,000-acre farm near Sedley, Saskatchewan, for the past three years. While some ship containers directly to buyers in foreign countries, Wecker prefers to arrange his sales through domestic intermediaries like Regina, Saskatchewan-based XTP Grain, instead. It still provides him with an alternative to the three or four major grain buying companies that dominate the industry in Western Canada, but he doesn’t need to worry about chasing down payments from someone on a different continent.

Benefits for everyone. “Loading containers of grain with specific quality or traits in farmers yards has advantages for everyone,” says Grant Whitmore with XTP Grain. “Farmers win because they don’t have to invest their time and money hauling the product to a delivery point. The buyer benefits too; they can monitor the quality of high end products while the container is being loaded. If an issue pops up it can be dealt with much more quickly and easily than if it’s sitting on a dock in Vancouver.”

“It takes a lot of trust on both sides,” Wecker says. “The buyer has to trust that you will deliver the high quality products they contracted for. You don’t want to disappoint them.”

Loading a container isn’t that difficult with the right equipment on your farm, Wecker says. The first step is to weigh the truck and container with a calibrated scale when it arrives at the farm. Next containers are inspected and swept out to make sure they don’t contain foreign matter from previous shipments. He then loads them using a belt conveyor. Weights are carefully monitored as it’s being filled using the trucks air pressure gauges. Once they are filled the truck is weighed again to ensure they are filled correctly. 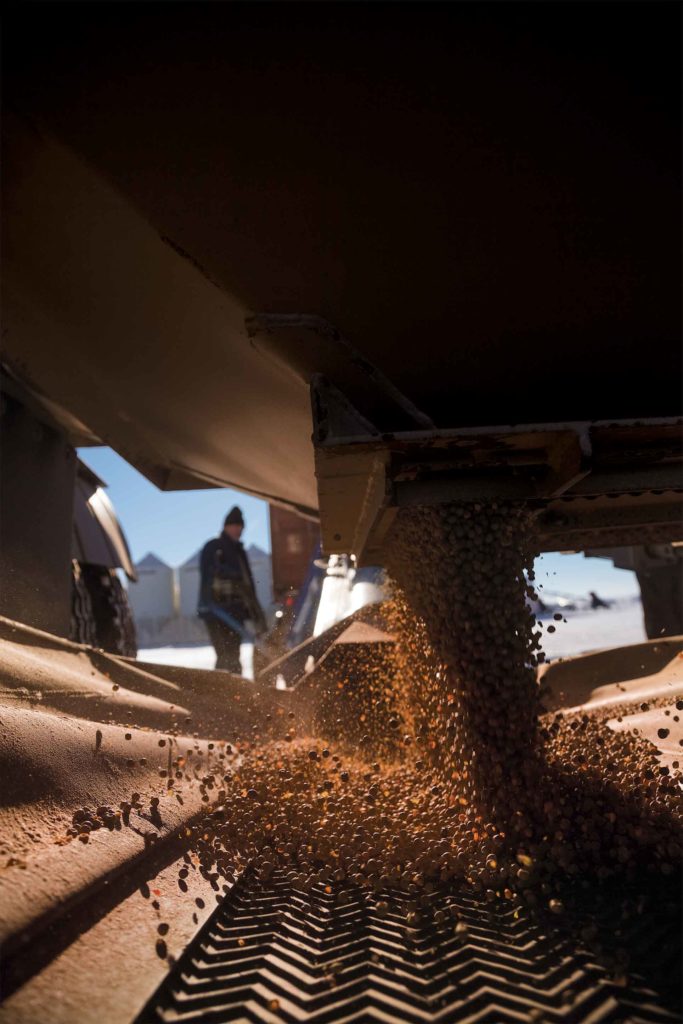 Unlike bulk grain, containerized shipments are only handled when they are loaded at the farm and unloaded at their final destination.

“If you don’t have a scale it would be almost impossible to ship with containers,” Wecker says. “You can’t overload them or else the ship won’t accept them, but if they are under loaded the end buyer is going to have to pay more freight per ton weight.”

Tamper proof seal. Once a container’s doors are closed the last step is to insert a numbered, tamper proof seal through the lock. This proves to customs officials and the end buyers that the cargo hasn’t been opened after leaving the farm.

“Seals are a critical part of a documentation system that monitors every part of the process,” says Christos Lygouriatis with XTP Grain. Some high value sales require the producer to have production protocols in place that record everything they do to a crop from the time it’s planted until its shipped. Proper sampling and grading reports also have to be done after harvest to verify crop quality.

Provides traceability. “People care more and more where their food comes from and how it’s grown,” Wecker says. “Using containers shows the end user that a shipment came from my farm. This gives me an opportunity to reach out and build a relationship with them and show why my farm is something special.”
For example, Wecker invited a Chinese buyer out to his farm and walked through the fields with them. He took the time to explain what he was doing and why he was doing it. 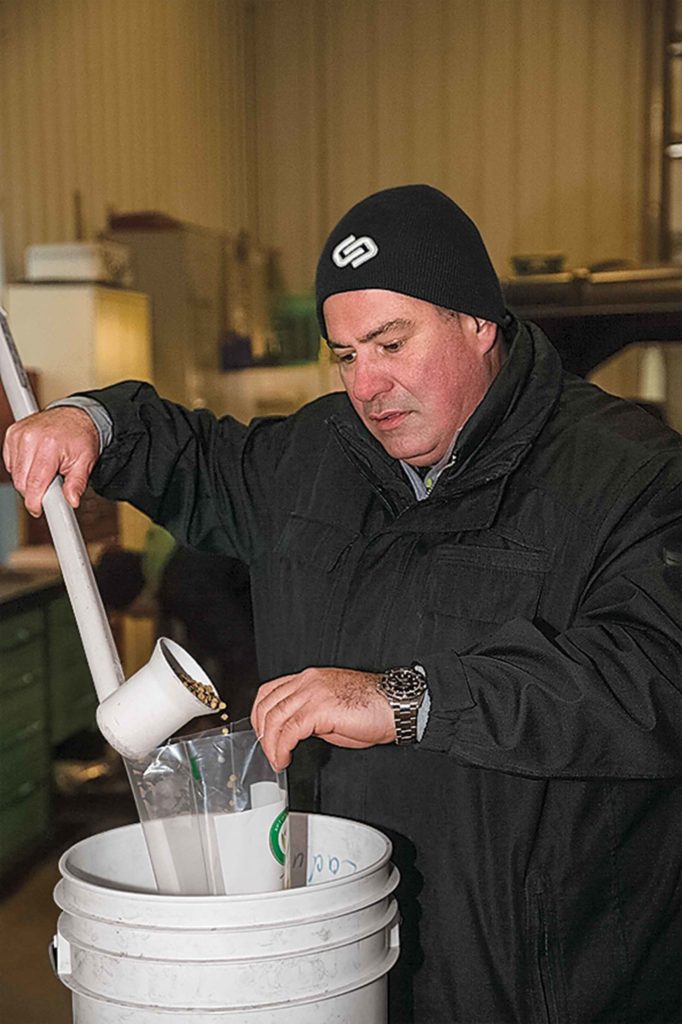 Christos Lygouriatis keeps samples of grain from every container.

“Coming out to the field and getting his shoes dirty looking for earth worms was an eye-opening experience for him,” Wecker says. “It helped him buy into the value of what we are trying to do and gave him a story to take back to his customers.”

Wecker says that the traceability containers provide has opened up new marketing windows. He now tries to keep buyers invested in his crops throughout the growing season by regularly sending out photos to show how they are doing.

“China has far more online grocery shoppers than the U.S. does and they want to click on a link to see where it was grown,” Wecker says. “Down the road I can see building a website to do this. Traceability lets us move beyond growing commodity crops and gets us back to our roots, growing food.”

Farming Within The Box