Plant pathologist David Sands is on a mission to food the world, not feed it. A professor at Montana State University, Sands’ research has taken him to corners of the world where successfully raising a crop each year is directly related to survival. First-world country inhabitants may not be starving, but they have their own life and death food issues to face.

As of 2014, more than one-third of adults and 17 percent of U.S. youth were obese according to a National Center for Health Statistics report. Obesity goes hand in hand with Type 2 Diabetes, an ailment the Center for Disease Control estimates 1 out of 3 people will develop in their lifetime.

Diet can help manage these diseases, but limiting staple comfort foods like potatoes is a strain on willpower as reflected by the multi-billion-dollar weight loss industry. Sands’ solution is to change the nutritional makeup of the foods people already love, essentially making—or just identifying—health crops instead of health foods.

“If you can give someone battling blood sugar problems a low glycemic potato that’s healthier for them, then everyone wins,” Sands says. “There’s a higher value for the farmer and it’s a better choice for the consumer.” Breeders, he notes, have long been focused on yield, but now may be the time to really push the nutritional components of standard crops, too. 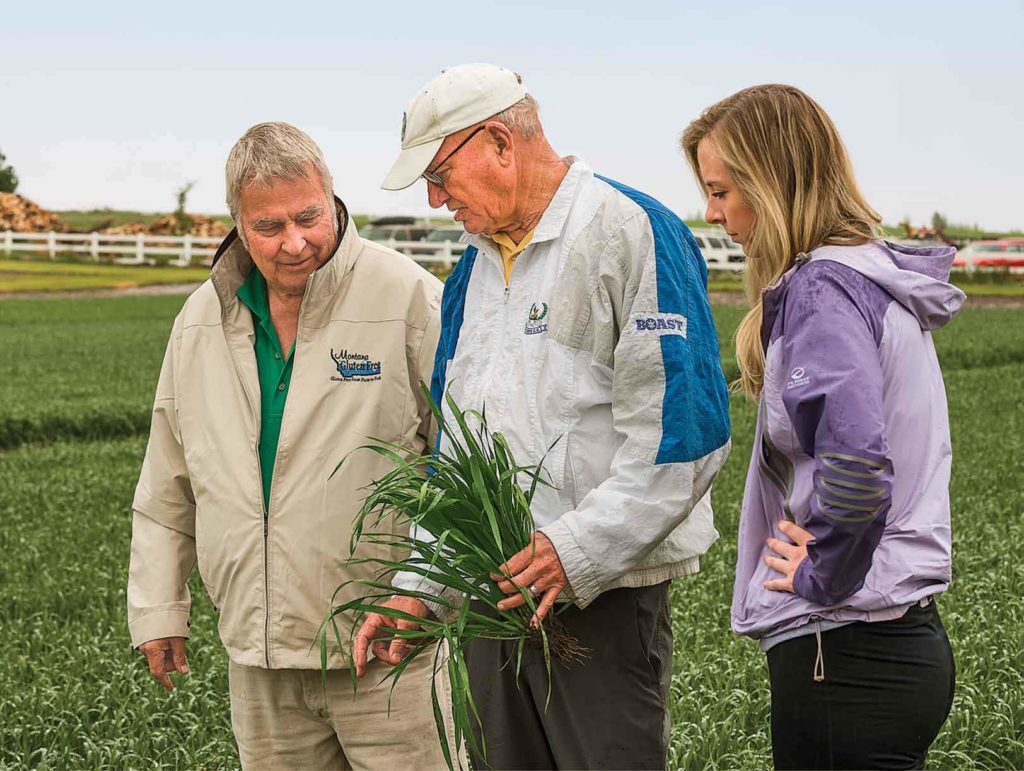 A 2015 Nielsen global survey found consumers, especially young consumers, are willing to pay a premium for products with health attributes. Fresh, natural, and minimally processed foods topped their preferences, taking that health challenge all the way to the field. It’s this shift in food awareness and demand that may pave the way for researchers and breeders to give nutritional characteristics more weight in their decision processes.

Assembling blocks. “Chronic diseases [diabetes, obesity] are ones there really aren’t cures for. There’s just drugs to treat the symptoms,” Sands says. “But, fundamentally, the body can heal itself if it has the right building blocks, which we can provide.”

Sands and his collaborators are looking to assemble and deliver those missing building blocks through staple food crops. The focus of their efforts has been in increasing quality protein content and identifying low glycemic, high lysine, and high Omega-3 fatty acids crop varieties.

They hope to impact people’s physical and even cognitive health. “We’re about to publish a study where we supplemented high performing high school students with Omega-3,” says Edward Dratz, Montana State University biochemistry professor who works with Sands on this project. “It improved reaction time, attention, and memory in a pretty spectacular way.”

In the case of low glycemic potatoes, he didn’t even have to breed a new variety. “I just had to find the ones that fit the low glycemic criteria,” he says. 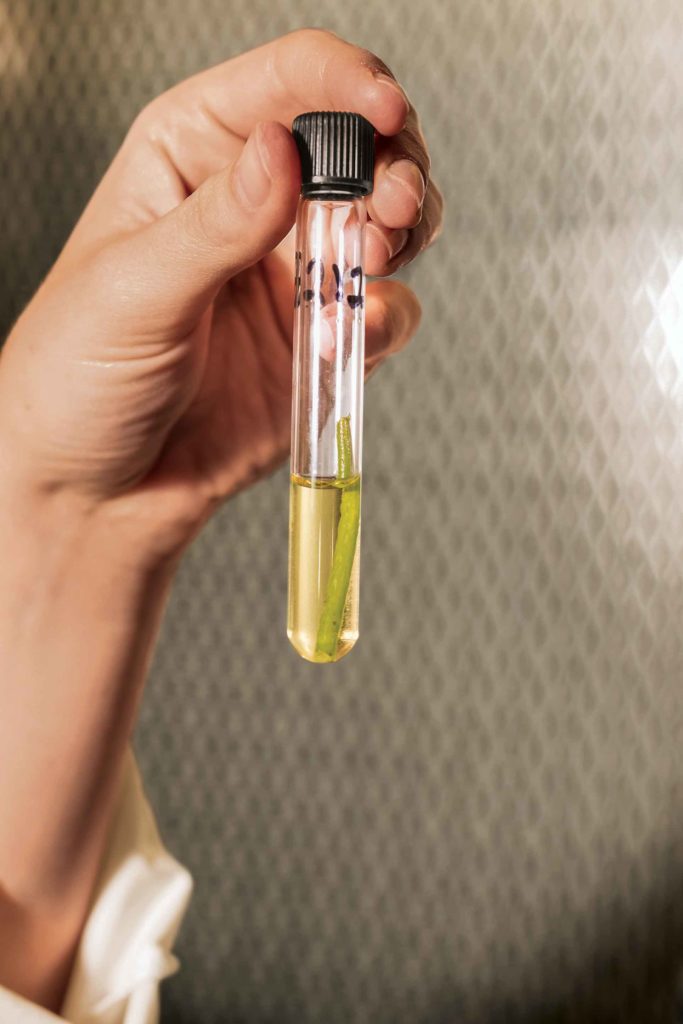 Bioassays are an affordable way to identify lysine.

His research team looked at 120 current potato cultivars and narrowed them down to 6 that were low-glycemic. Huckleberry Gold, a potato already on the market, made the cut.

Jeff Bragg benefited from this discovery in multiple ways. Formerly a potato variety developer for Green Giant Fresh and currently a seed potato breeder and potato crop consultant among other things, Bragg was diagnosed as pre-diabetic mere days after giving a presentation on the glycemic index to a Holland potato group.

Bragg was already growing Huckleberry Gold when it was declared low glycemic so he was excited to keep it in his diet and for a fresh marketing perspective for one of his products. He sees some major hurdles, though.

“We only have one nutritional label for all potatoes. That’s madness. There are more than 500 different varieties and they’re all radically different in nutritional makeup,” he says.

That puts the onus of marketing on him and other farmers to identify it as a premium health product.

Montana Gluten Free owns the Protina oat variety Sands helped develop. They struggled through developing research to get it identified as a gluten-free oat variety, which helped them market the crop initially.

“Right now we’re growing at an explosive rate,” Iverson says. “We’re not totally focused on gluten-free, though. The big picture now is low-glycemic due to the diabetic market.”

Iverson is increasingly selling whole specialty oats to processors as demand for health crops grows. “Everybody reads labels now, which is a tremendous change from when we started 14 years ago,” he says. 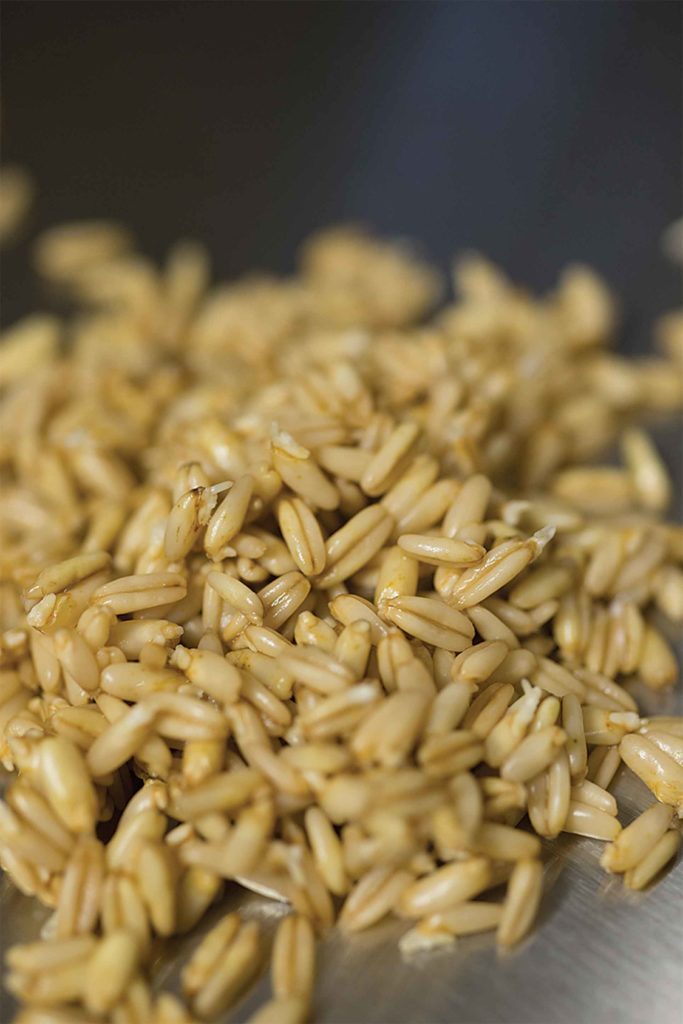 Tricky business. Selecting crops for nutritional value does have its hangups. “Farmers get paid for yield. Yield is measured by starch, which is the cheapest thing a plant can make. Plant breeders know some of the most nutritious plants don’t yield the most so there’s conflict,” Sands says. “But people are reading labels. Crops with better nutrition will be higher value so it can be a win-win situation.”

In the case of Protina, Iverson says it yields at about 80 percent of traditional varieties, but they pay the farmer 4 to 5 times more, so it works out.

Sands is working from the research side to make it more affordable for breeders to identify nutritional attributes. “We have to make it cheap and easy. Breeders aren’t going to spend $100 per test on hundreds of varieties,” he says. Sands identified a bacteria that needs lysine to survive. If it grows in the presence of plant juice, the plant produces lysine. “We can do that for 10 cents per variety then send the promising candidates for quantitative chemical analysis,” he says.

There’s also marketing issues. “We can’t grow a crop unless there’s a market. We have to have market development,” Sands says, which is why a plant pathologist has economists and marketing specialists on his team. “We need people from many disciplines to solve these wicked problems, but we’re picking up steam.”