Farming with the Civil War and more…

Betts Berry laughs and says her farm is still a work in progress even though it’s been in the family since the 1830s. Truth is, this is one of the nation’s most historic farms. Located near the Chickamauga battlefield where the Federal and Confederate armies took a combined 34,000 casualties, the house still bears scars from that awful Civil War fight.

Chickamauga Creek, where horrific fighting occurred during the September 1863 battle, winds along the quiet, pastoral property today. Federal artillery set up across the creek at Lee and Gordon’s Mill and fired shot using 10-pounder rifled Parrott cannons. At least one shot hit the house.

The hole in the outer wall still exists, covered by Plexiglas, testimony to history. Inside, furniture and doors damaged by the shot, patched up and stabilized, are still used by the family.

Betts Berry still has the remains of a shell found inside the house after the battle. “It bounced around in here and hit a lot of things,” she says, hoisting the old ordnance in her hands.

“When people visit the national battlefield park now they tend to think the battle was confined to that area, but there was skirmishing all around. There was a lot of fighting in this area, a lot of really terrible things. Now it’s just a good place to be, not a fancy farm, at all. It’s a working beef farm and I’m proud of it,” Berry says. 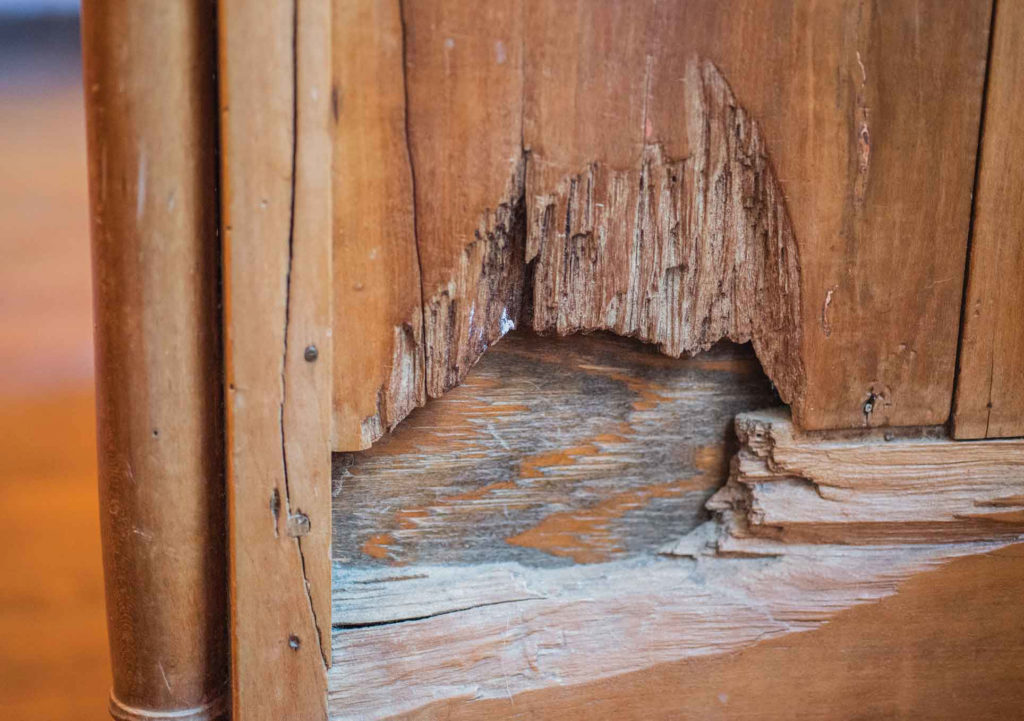 A cannon shot punched a hole in this piece of furniture, still in use in the Berry house.

Berry, it turns out, relishes the cattle business. She’s active in state groups as well as the National Cattlemen’s Beef Association’s board of directors of the federation division and worked on its nutrition and health, and investor relations committees.

Her love for agriculture continues with her sons, David and Will, the sixth generation of her family to make a living on this farm. Today, they’re running 170 mama cows on 800 acres.

She moved back to the old farm in 1978 while teaching kindergarten, then, in 1981, partnered with an uncle on some beef cattle. She discovered she had a knack for the business.

She descends from James and Clarissa Hunt, who moved from South Carolina to extreme northwest Georgia in the 1830s. They had four children, but Clarissa found herself widowed at a fairly early age. She still lived here at the time of the battle.

“Clarissa had to be a very strong lady,” Berry says. “There’s a story that she came to the house during the battle and confronted some Federal soldiers here. She tried to pull one down the stairs to keep him from going up to steal things. He pointed a gun at her, then his commanding officer pulled a gun on him and said no soldier of his would kill a woman.” 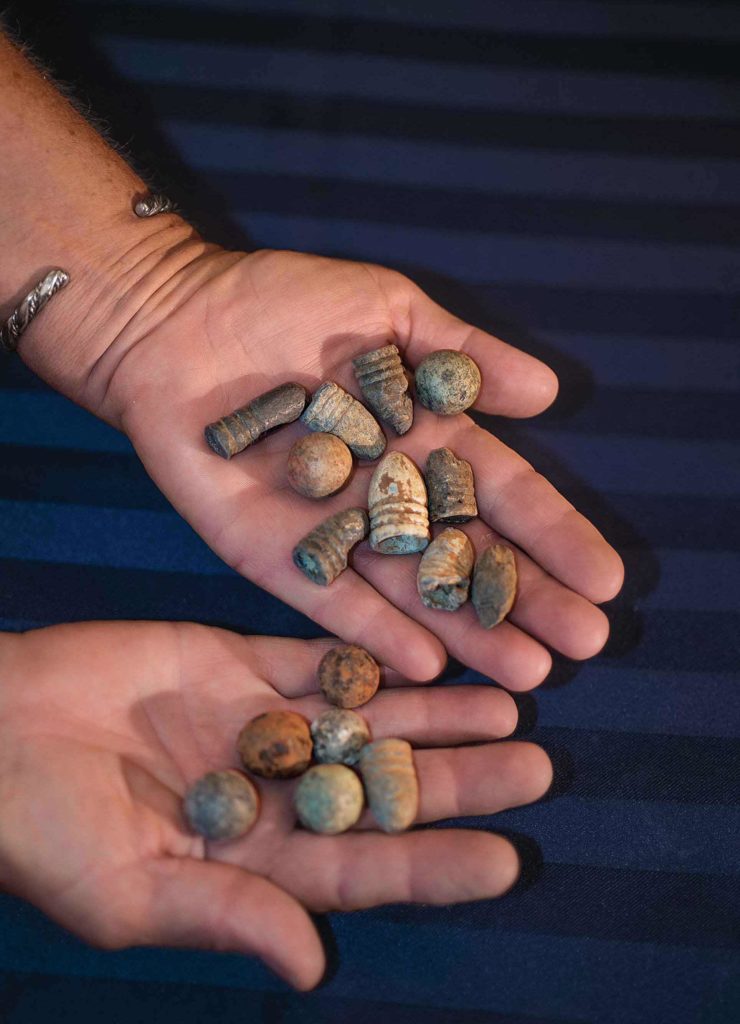 These Minié balls fell out of a wall when Betts Berry renovated what through the years had become the farmhouse kitchen.

In another story, Clarissa came back during the battle to find two Federal soldiers dead on her front porch. Fearing their compatriots would blame her for their deaths, she and her mother dragged them away and buried them on the back of the property.

“The road running between Lafayette, Georgia, and Chattanooga runs right in front of this farm, so this was the center of a lot of action during the battle. Both sides wanted to control that road. Then the creek back here was important, too, because they needed water. So here we sat.”

When Berry remodeled her kitchen area, she removed the covering from an old wall. Minié balls fell out onto the floor. She keeps them with her other artifacts from the house

Other than that, she does not search for battle mementoes. “We have never allowed metal detectors on the farm, and we don’t do it. The reason is, we feel this is kind of sacred ground. It should be preserved,” she says.

Chickamauga and Chattanooga National Military Park, located a few miles away, opened in 1895, was the nation’s first military park. Visitors today appear to be a blend of Civil War buffs, tourists making a brief stop, and bicyclists enjoying the backroads.

When the armies squared off in 1863, the landscape here was a patchwork of forest and small farms. G  Chattanooga, which then had a population of about 2,500, was a railroad and transportation hub, a coveted prize the armies fought over. 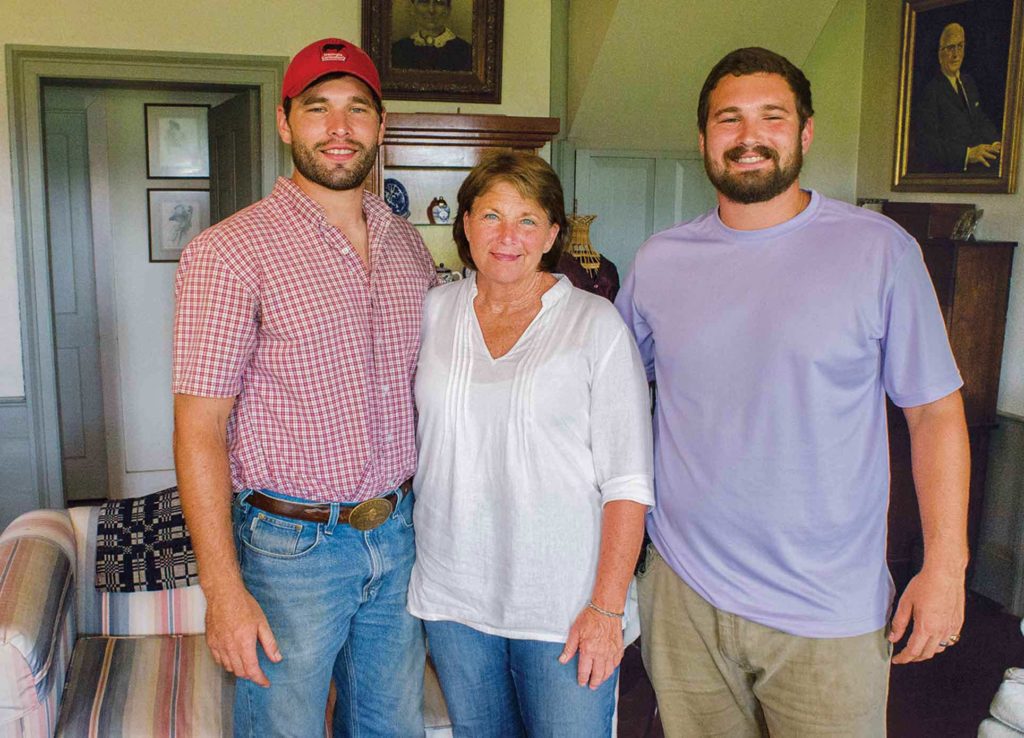 After college graduation, both Will and David Berry returned to partner with their mother, Betts, as the sixth generation on the family farm.

“The campaign was for control of the railcenter at Chattanooga. Whoever controlled Chattanooga effectively controlled the Deep South,” says Jim Staub, a retired ranger who spent many years at the battlefield park.

Berry’s farm, he says, was a mixture of forest and farmland, like many others in the area. “It was a heavily forested battlefield they engaged on. Commanding officers were very limited with what they could see, so they relied on couriers. It was fairly flat terrain. Where the national battlefield park is now, around 20 families had farms. Among them was Eliza Camp Glenn, a young widow whose husband died in Confederate service. She was Betts Berry’s great-great grandmother. A lot of the Federal battle planning with General William Rosecrans took place at her house, which was destroyed in the battle,” he says.

The Confederates won the battle but did not press on to take Chattanooga, making their victory a hollow one. In the spring, Federal troops moving out of Chattanooga captured Atlanta and cut a swath through the Deep South. That was the beginning of the end.

“We’re not still fighting the war, but I am carrying on the tradition of this family and this farm,” Berry says.