Just before the sun breaks the horizon, and continuing for a few precious minutes after the first rays of light, is a time defined as agriculture’s golden hour. There’s nothing but dew and quiet, no dust and no heat, a time before noise and hurry complicate the day. It’s the reason our farming forefathers made a habit of rolling out of bed at an ambitious hour of the night.

Even old Ben Franklin—who was, himself, a notorious night owl, according to all accounts—knew the value of the early hour. Everyone knows his quip about “early to bed, early to rise,” but he had a more pointed comment about the sunrise. “The early morning has gold in its mouth,” Franklin wrote.

The importance of capturing that golden gift has come into focus (both literally and figuratively) for a couple of field editors for The Furrow. Larry Reichenberger and I have been operating unmanned aerial systems—those little aircraft everybody calls “drones”—for awhile now, and those quiet early morning launches remind one that, in spite of all the science, agriculture is still an art. We hope our images you see on these pages support that point of view. 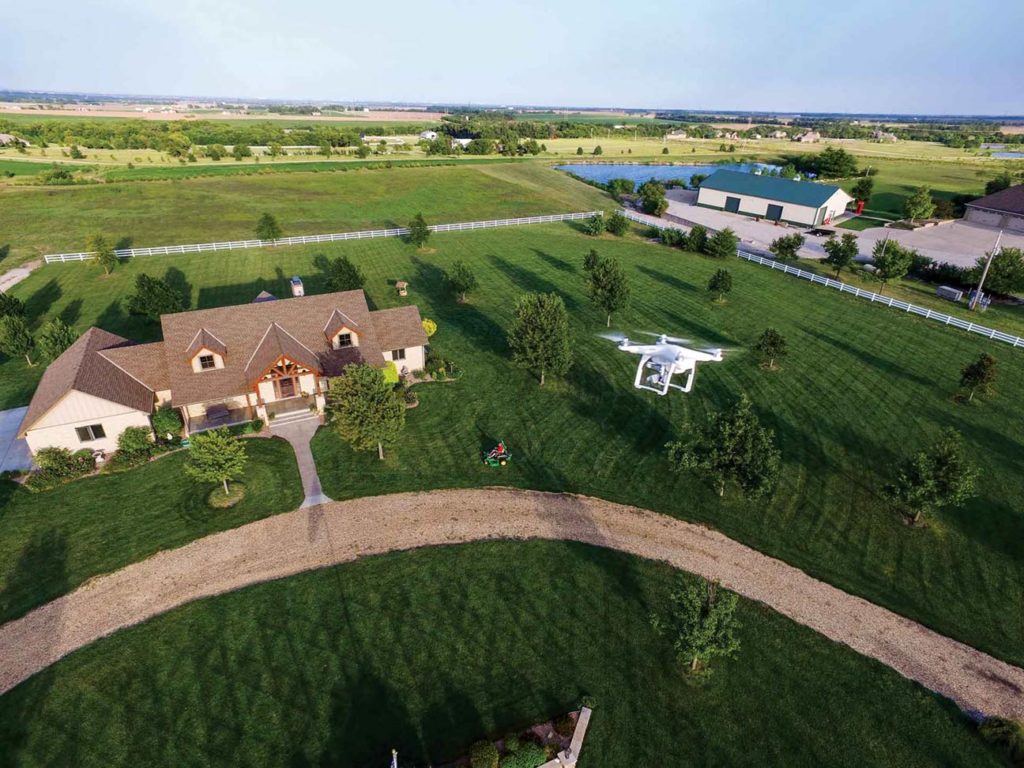 Launched while shadows are long, a drone heads out in search of early morning scenes.

View from the top. The aerial drone has a unique fit with farming. Agriculture is all about geometry and symmetry, flow and balance. Farmers are stewards, and every steward needs a vantage point. Even Moses, according to the biblical account, mustered up enough energy at 120 years of age to leave the plains of Moab and work his way up Mount Nebo all the way to the top of Pisgah Peak so he could view “the whole land” known as the Promised Land. And that’s what stewards do; the caretakers of the living soil need a chance every now and then to view creation from above, getting a glimpse of the tapestry as it is being woven in order to understand how all the parts are going to fit together.

Flying high. There’s nothing revolutionary about aerial images, of course. A look back through farm magazine archives finds that farmers in the 1960s were buying Cessna airplanes to get a high-level observation of their fields. But the drone has captured the imagination of the modern agricultural industry, offering a combination of powerful GPS technologies in an incredibly small—and increasingly affordable—package.

The experts (perhaps we should call them self-appointed experts) swing wildly as they try to predict the future for aerial drones in farming. In the meantime, young farmers such as Brent Gruenbacher, the fellow driving the strip-till unit in the photo at the far right side of this page, see a number of practical uses for drones right out of the box. Though he does not yet own a drone, Gruenbacher sees how such an aerial hired hand could save a lot of steps when checking on a pivot irrigation system, for example. “If you’re having trouble, you could fly the drone and find where the problem is, and that would save a lot of steps and time compared with having to walk out there,” he says. “You might be able to figure out what tools you will need before you head out to do the repairs.” In addition, he sees how an overview could help to add “truth” to the farm’s extensive grid soil sampling. “Things that aren’t easy to see at eye level may show up when you’re looking down on the entire field,” he says. “It would be nice to study specific areas, such as where the grid is calling for a lot of extra nutrients.” 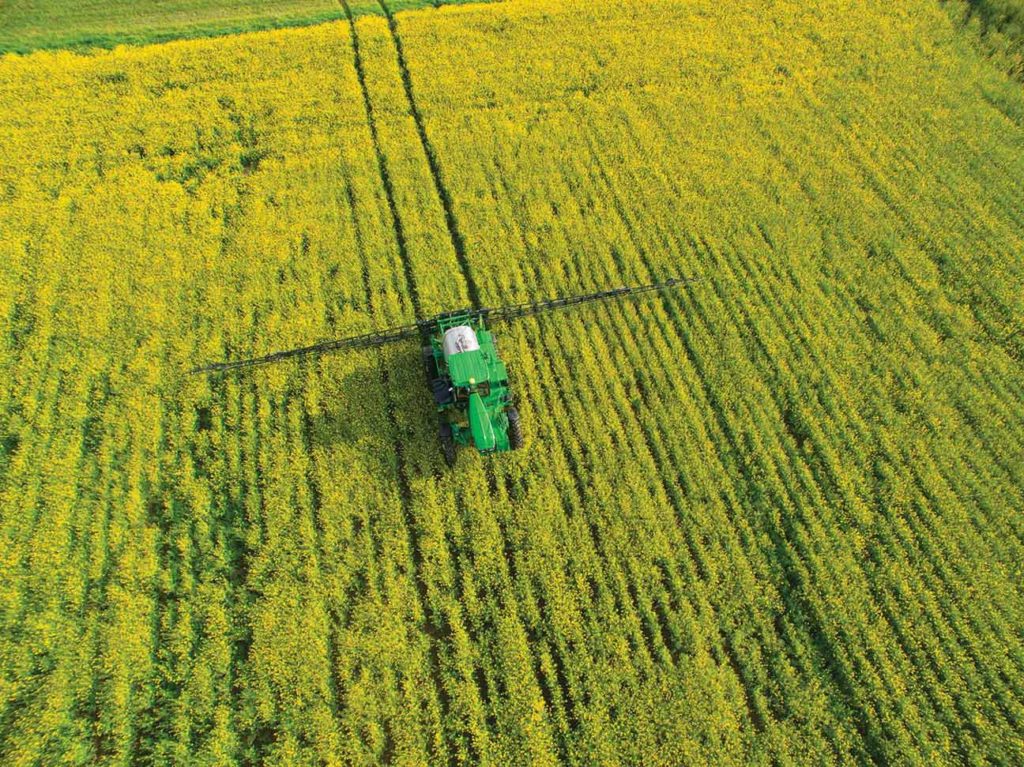 When viewed from above, spraying a canola field becomes a study in parallel lines.

Looking at drone images has helped Ryan Kunde find such variation. He’s a winemaker, offering award-winning Pinot Noir and other wines at the DRNK Winery near Sebastopol, California, where he uses drones to help direct grape harvest. “The drone gives us live data in the field that allows us to pinpoint our sampling and make decisions about when and where to harvest,” he says.

Changes in terrain can affect the vigor of a vine and thus the quality of grape within a vineyard, a subtle change that can be hard to see at ground level. “But you look at an aerial image, and the variation smacks you right in the face,” Kunde says. “You see where a change begins and ends. You get a better understanding; it can be really enlightening.”

The drone has helped boost his understanding of the land on a larger scale, as well.

“I began flying drones in 2010,” Kunde recalls. “When I started flying in the hills, I felt that I understood the terrain a little better. Now, I can’t help but think about wind patterns, soil development, water flow, and those kinds of factors. I think using drones has helped me develop a much better understanding of the relationship between the crop and the environment surrounding it.”

A drone certainly highlights conservation structures. With its birds-eye view, the aerial platform yields a three-dimensional image of such things as waterways in Wisconsin or terraces in Tennessee, a graphical and logical look at how wind and water flow over a landscape. The layout of a strip-cropping system may not be so easy to follow with boots on the ground, but a look from overhead brings clarity to the intent behind the design. 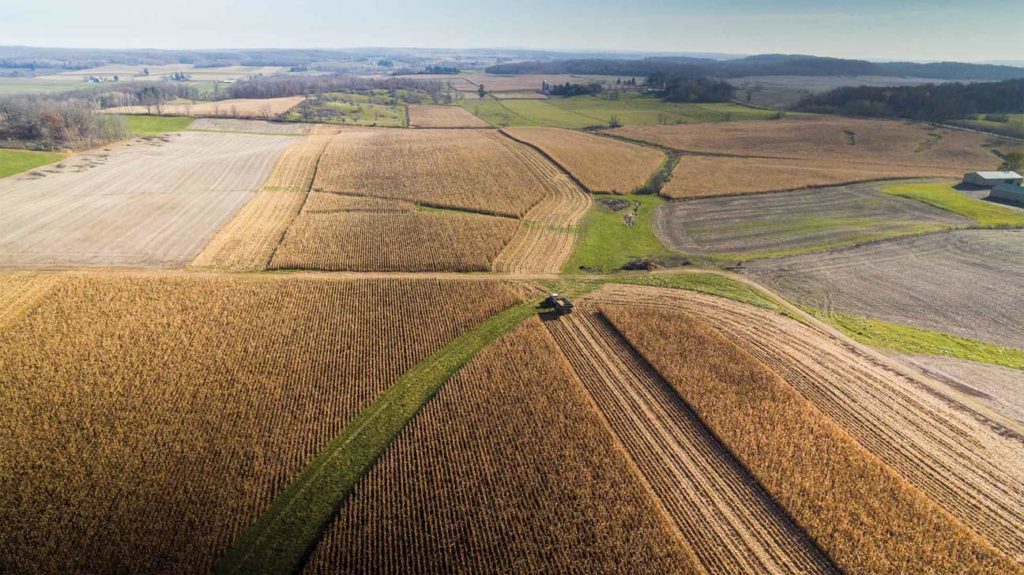 Waterways form an intricate web through a Wisconsin corn field.

Frequent flying. While much ado is made over the drone’s ability to provide a three-dimensional view of the land, perhaps the greatest contribution of these little aircraft will be in the so-called fourth dimension—time. Because the drone is relatively inexpensive to own (in comparison with the cost of everything else in agriculture), and it costs only pennies per hour to fly, the drone offers a farmer a chance to fly more frequently. In the dryland farming system common to the Corn Belt, there really aren’t that many critical decisions to make during the growing season. Perhaps there’s a call to make about applying a pesticide, but most management decisions were made by planting time.

Instead, the art of farming relates to the continuous learning process—not so much looking at what happened today, and taking steps to fix it, but using tools such as the drone to identify clues as to why it happened. And then using that knowledge to tweak a decision or two regarding next year’s crop—or a crop many years into the future when a similar weather pattern, or a similar insect infestation, shows up on the horizon.

The experts in the drone world say frequent flying yields “sequential analysis based on time-series animations.” In other words, you fly the drone over the field a lot during the growing season, then merge those images into a timeline. It’s not rocket science. 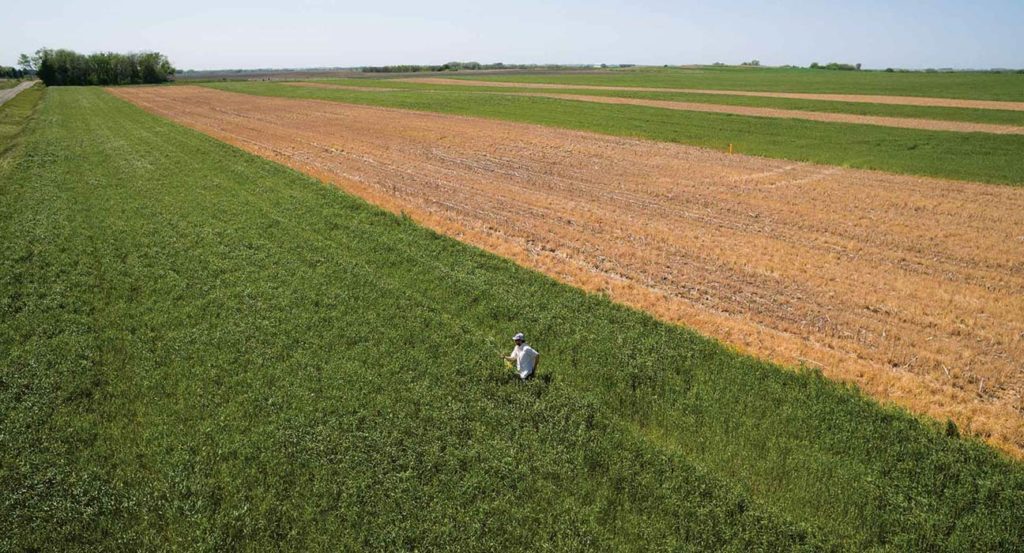 A researcher checks strips of cover crops alternating with bare soil in an Iowa test plot.

Or, maybe it is. Computers and software have to do some mighty heavy lifting to stitch images together, allow for slight differences in exposures and vantage points, and produce a product that makes sense.

This data-driven approach has even captured the attention of ivory tower icons such as the Massachusetts Institute of Technology, which doesn’t exactly have a track record of working in agriculture or related industries. But MIT recently began to offer a course for agricultural professionals called Innovation and Technology in Agriculture and the Environment. The course focuses on the interface between the environment, agriculture, food, and water; the opening sessions of the course offer an overview of the digital frontiers in farming, including such things as big data, remote sensing, and field-level automation.

Nothing, it seems, gets a scientist more excited about agriculture than a drone. The Chinese drone giant DJI recently added a You Tube video of its MG-1S “Agricultural Wonder Drone,” featuring a 1-gallon spray tank and four-nozzle boom, applying spray to a Chinese cornfield. At last check, that video had been viewed about a million times.

One drone expert extrapolated from his viewing of the video that drones will spray crop fields five times faster than today’s technology allows. Considering that today’s modest 80-foot booms allow farmers to spray nearly 100 acres an hour, that prediction seems quite optimistic. But the public’s fascination with drones may be an opportunity to connect with agriculture. “Half of the value of drones involves decision making,” says Californian Ryan Kunde. “The other half is storytelling. Small growers can use it to explain what we are growing and where it comes from. We can highlight our care of the land. And that’s a good thing.”