Today he is recognized as one of the most progressive young farmers in North Carolina. But when 33-year-old Russell Hedrick started, he knew next to nothing. “I was kind of naïve about it,” he says. “I thought you put a seed in the ground and you’d have something to harvest at the end of the year.” Now he laughs about how clueless he was. “I had no idea how complex farming was.”

Determined to pursue the dream he’s had since childhood, Hedrick made his move five years ago…he quit his job as a fireman and became a farmer. He started with 30 acres.

Hedrick was at a huge disadvantage—he is not from a farming family. But knowing what to do with his crops was another matter—he is from a family of moonshiners. “My grandpa and his brothers made quite a bit of moonshine,” says Hedrick, adding that his grandfather and several of his grandfather’s brothers even went to jail for it. Fortunately for Hedrick, they left the recipe behind, and with that and two business partners, he started making his Gatlin 110 moonshine—completely legal, of course.

Now, just five years after he started, Hedrick manages 1,000 acres of row crops. He’s bought farms, leased others, and grows grains and raises cattle, hogs, and sheep. He’s learned it all through YouTube and other internet sites—and in meeting the right people. Hedrick was quick to develop a strong passion for cover crops, and he credits cover crop gurus Gabe Brown, Dave Brandt, and Ray Archuletta for giving him guidance. 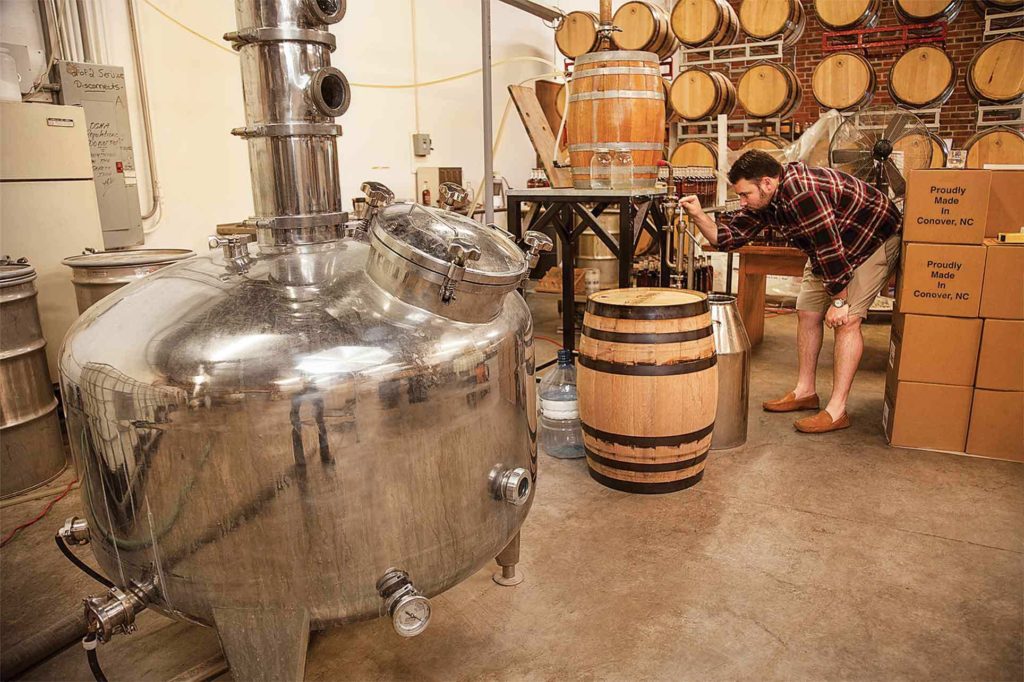 Hedrick says the moonshine—and his various bourbons—were obvious markets, not just because of his heritage but because he recognizes the value in direct marketing and social media. “It’s tough to be a first generation farmer and make enough money if you just haul your grain to an elevator,” he says. “With the bourbon, we’re going direct to the consumer.” The same goes for his livestock and seed and even the corn grits he grinds. Much of what he produces is marketed through Facebook.

“One thing I’ve learned is that many farmers are great farmers, but they’re terrible marketers,” he says. “Social media for me and other young farmers has been of great help in getting that marketing edge.”

Making alcohol sounds fun—and truth be told, it is—but there’s no question Hedrick has created a great market. At a time when yellow corn was reaching $4 a bushel last year, Hedrick was selling his non-GMO yellow corn to the distillery and getting $6.50. He sells his Gatlin 110 Moonshine and 1712 Bourbon directly through stores in three states—North Carolina, Louisiana, and Michigan—and sells them to 31 other states online at cellar.com. You can learn more at the distillery website, seventeentwelvespirits.com.

About 50 percent of all the corn he produces runs through the distillery; that takes about 8,000 bushels per year. Another 40 percent is marketed through his Heritage Ground stone ground grits.

Hedrick readily admits he doesn’t do it all himself. He set up his distillery with two partners, Zack Cranford and Tim Weaver. Hedrick considered Weaver a master distiller, but he died unexpectedly last year, and the loss is still felt. “Tim was one of the best people I knew for making moonshine,” says Hedrick. “He’s going to be hard to replace.”

Hedrick and Cranford are doing all right, however. The market continues to grow, and their products keep winning awards. “For us to be a startup and win the medals and awards we’ve received, I think that’s doing pretty good,” says Hedrick. 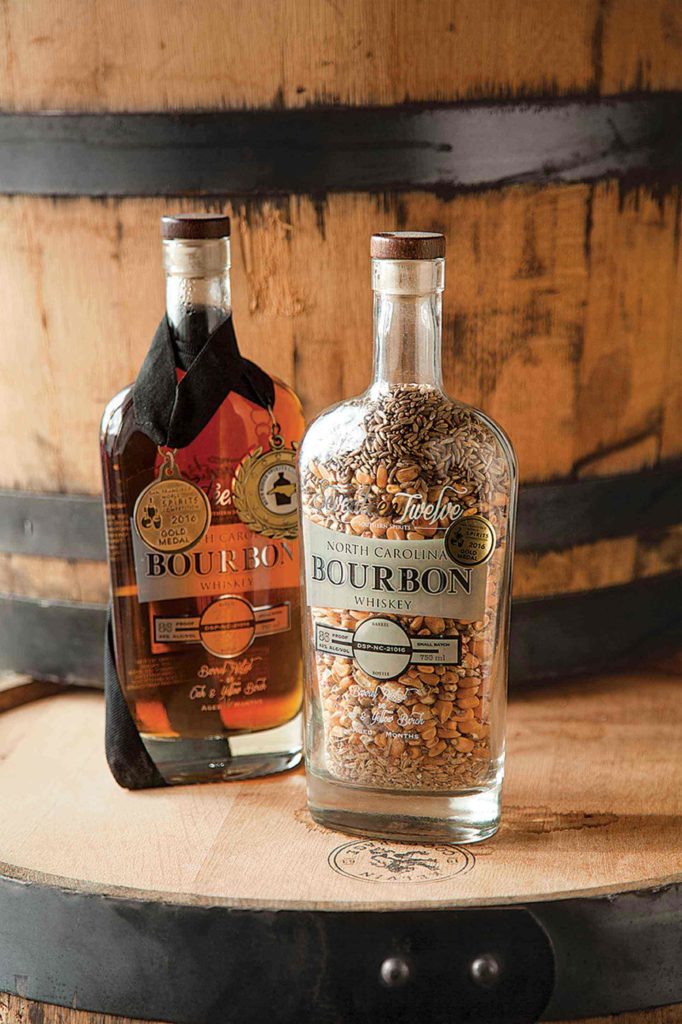 One bottle displays the grains Hedrick grows to make his product.

With everything he does, Hedrick pays attention to what the market demands. That’s why everything on his farm is non-GMO. “I don’t have a problem with GMOs, but it’s what people want,” he says.

The farm is a perfect partner for the distillery because if Hedrick thinks of a new twist, he can grow the grains himself. Maybe a single malt tritacale liquor? He’s on to it. What will an heirloom Appalachian soft wheat produce? Hedrick will soon know. “We’re trying to find some of those old heirloom grains to make a premium product,” says Hedrick. He’ll soon be trying Turkey red winter wheat.

His latest product is something he’s very proud of—Bloody Butcher Bourbon, made from open pollinated Bloody Butcher heirloom corn, which dates back to 1845. “It’s really smooth and has a great flavor profile,” he says.

Most visitors are surprised to learn that his distillery makes bourbon. “People think you can’t make bourbon if you’re not in the state of Kentucky, but you can,” he says. His bourbon is the first distilled in North Carolina since prohibition.

Hedrick gives many tours of his distillery and farm and never fails to educate the public about farming. “People ask how we farm, what goes into a crop,” he says. “They really want to know about the products that went into making of this moonshine and this bourbon.”

Of course, a little tasting always helps deliver the message. “I had the ladies from Farm Credit on a tour about two weeks ago and they were drinking our 140-proof liquor like it was sweet tea.”

Africa's game ranchers are on the prowl for new opportunities.