This is the farm Tim Smith grew up on, 400 acres of gently sloping land near Eagle Grove, Iowa, and he’s seen it change quite a bit since he was a child. “When I grew up here we had alfalfa fields, oat fields, corn and soybeans. We had pasture. We don’t have that anymore. It’s just corn and soybeans.”

Something about that always bothered Smith. “Is that all we want growing on our landscape? Corn and soybeans?” What was obvious was that when the diverse crops left, so did the wildlife.

That’s greatly changed since he’s added a conservation program to his farm. In 2015, Smith planted 14 acres of prairie grasses, forbs, and legumes, in strips 100 and 120 feet wide laying across the contour of his field. One is right in the middle of his corn, the other at the field’s edge next to a creek.

Today, Smith sees wildlife he hasn’t seen in years. “There are birds that will nest in the strips that won’t nest anywhere else on my farm. The dickcissel is one. You won’t find it anywhere else on farmland in the area.”

Smith is one of the farmers participating in Iowa’s Prairie STRIPS program (prairiestrips.org), a project coordinated by Iowa State’s Lisa Schulte Moore, a professor of Natural Resource Ecology and Management. The program has a host of partners and is expanding into other states—Wisconsin, Nebraska, Missouri to name a few—and growing quickly. Today it has 45 farmers participating. 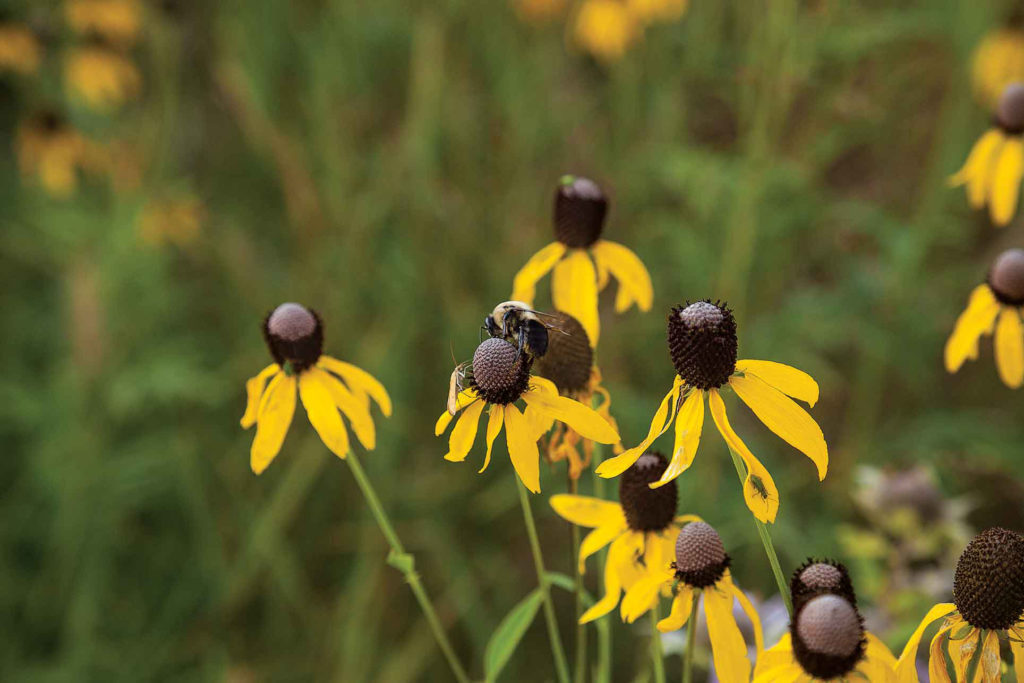 A bee lights on a native yellow coneflower.

Farmers are quickly realizing from program data and farmer testimonials that it’s hard to ignore the many advantages:

m The strips encourage a phenomenal resurgence in birds and mammals. On Smith’s farm, STRIPS researchers counted 31 bird species in 2016. Six of those are on a “conservation watch” list—not endangered, but heading in that direction.

m The small areas of prairie do a great job of soil conservation and improving water quality. Data shows that a field with 10 percent prairie reduced sediment export by 95 percent, phosphorus export by 90 percent, and nitrogen export by 85 percent compared to watersheds all in row crops. “We want water to slow down and have a chance to infiltrate” says Moore. “The prairie’s stiff stems do that. They’re like a roadblock.” Common waterway grasses like fescue and brome simply lay down during heavy rains. “With prairie, there are a lot more roots in the ground.”

m Pollinators become prolific. Walk into any prairie strip during the summer and the buzzing of bees is the first thing one hears. Honey bees do well in soybean fields—until the soybeans are finished blooming. “When blooming season is over, hive weights dramatically decrease,” says Moore. “There’s nothing left to eat. Prairie strips augment the field and help the bees go into winter much healthier.” And the monarch butterfly is on every naturalist’s list of concerns, so milkweed is always in the seed mix for these projects. Monarch enthusiast Rob Stout, who farms 1,100 acres near Washington, Iowa, included six varieties of milkweed in his seed mix. 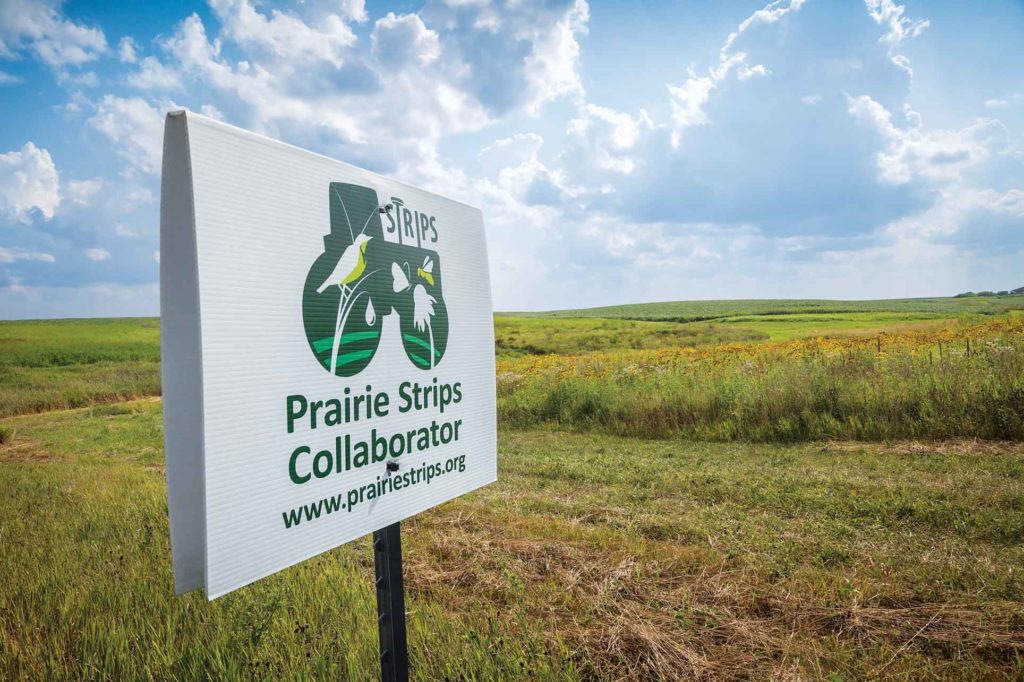 A sign in the corner of Rob Stout’s field tells people passing by that the flowers and grasses in his crop field are part of a conservation effort.

As he’s heading out to check one of his filter strips, Stout notes that he planted 39 species of plants. “I’ll probably be able to identify four or five,” he jokes. Knowing all their names is not the point for him. “Conservation is important to me. We’re all part of the watershed, and everyone’s water ends up in the Gulf of Mexico where they have a hypoxia problem,” he says. “We can’t just say, ‘Hey, that’s your problem down there.’ We’re part of the problem.

But the little planting of prairie flowers on his farm has one more advantage for Stout. From May through September, his field always has something blooming, in yellows, purples, pinks, and blues. “I drive by here several times a day and I stop and get flowers for my wife all. She loves it.”

That her husband doesn’t know their names matters not a bit to her.

"Growing more food while restoring resources is agriculture’s job for the 21st Century."