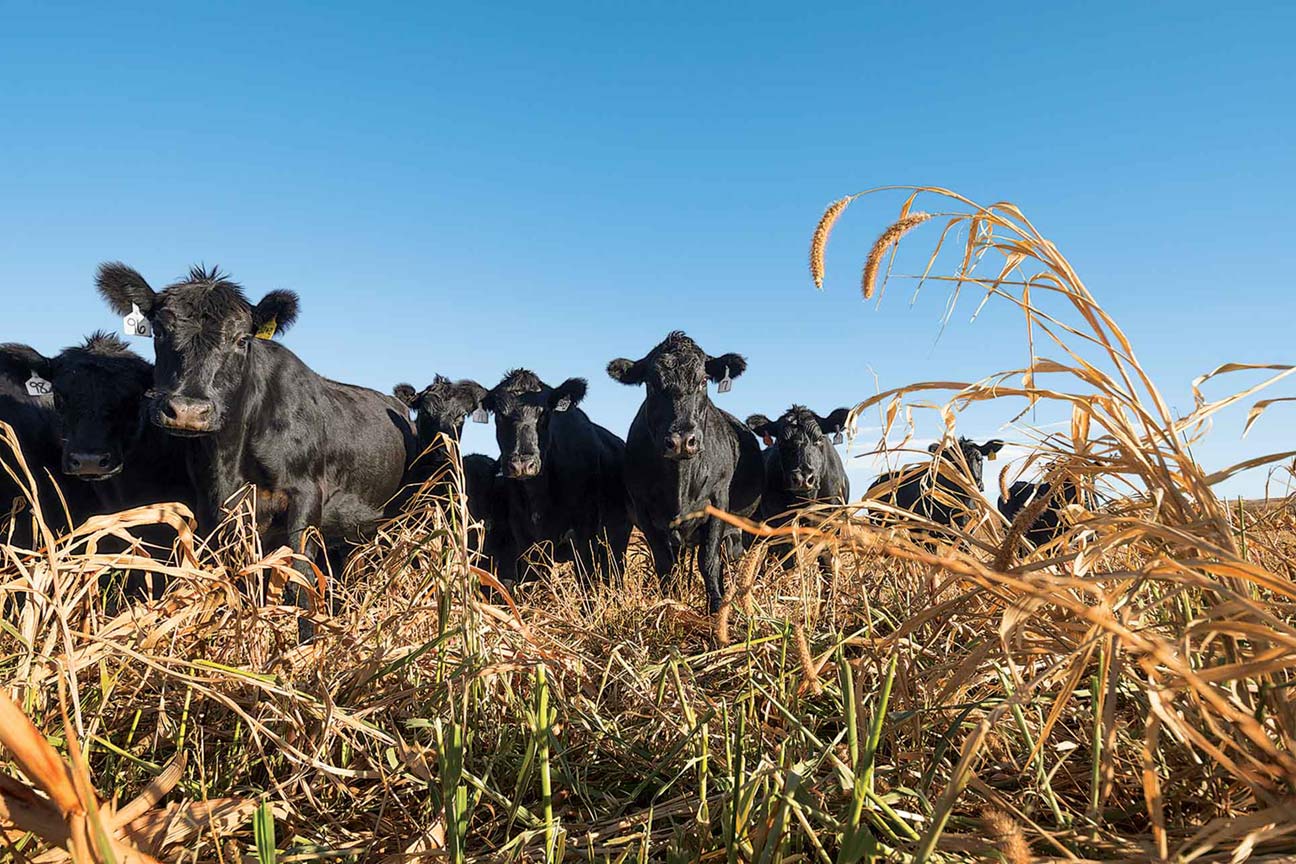 Making more with less is a maxim many new business owners are forced to subscribe to. Tara and Ole Becken have learned they are no exception.

“Finding grass is impossible,” Tara says. The Big Timber, Montana, native is working with her husband to build their own commercial Angus cow herd in the rocky Boulder River valley just south of their home town. One of their biggest hurdles is very little land comes available for lease or purchase.

Becken jumped at the opportunity to take over a lease on a piece of irrigated hay ground Ole’s father held for a decade. The family had hayed it for years, and it produced decently, but the Beckens thought they could get more use from the acres by grazing.

Having worked some with North 40 Ag helping with producer education events, including those featuring the company’s cover crops mixes, Becken was fairly certain they could increase production and grazing value by reseeding the alfalfa/grass field to a cover crop mix designed for grazing. 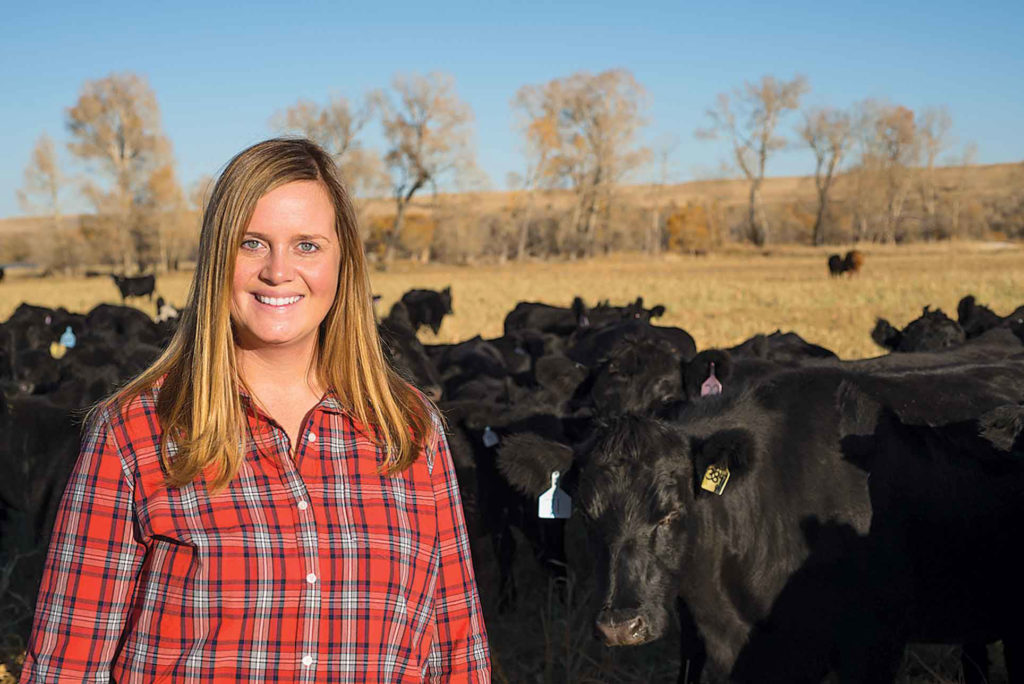 ara and Ole Becken, Big Timber, Montana, were able to wean calves 20 pounds heavier than previous years by seeding an old hay meadow to a high forage value cover crop for fall grazing. Producing more and better quality forage gives them the flexibility to keep their land investment small but still have the resources to continue expanding their commercial Angus herd.

“A cover crop can increase both the quantity and quality of forage,” says Kate Vogel, North 40 Ag agronomist and owner. “It can be used as a tool to defer from feeding as long as possible in the winter, or it can be used to give native range a rest at key times.”

Vogel has created a number of cover crop mixes to suit the timing and goals for grazing. In Becken’s case, she wanted high quality forage for her cow/calf pairs to graze in the fall. When native range started to head downhill in late summer, the Beckens would move their cattle to the high forage value cover crop in time to put a few extra pounds on their calves before they’re sold in October.

“We had a little bit of everything in there. Our No. 1 goal was biomass for forage, but we also wanted to build soil organic matter,” Becken says. She notes the field has been harvested year after year with little carbon being returned. They’re hoping the roots and attached residue will start replenishing the soil, helping produce even more forage for their herd. 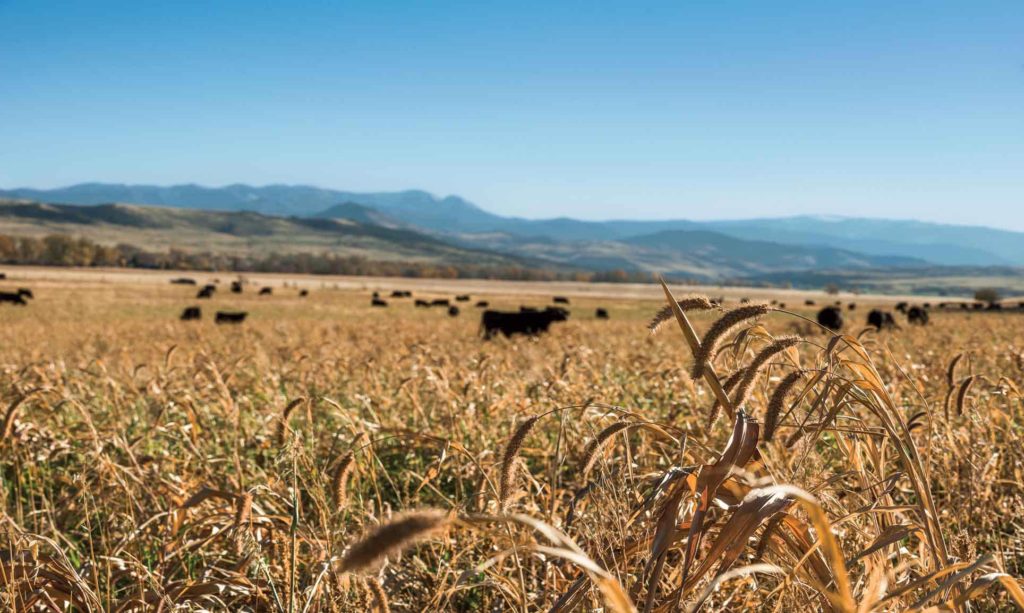 They had a neighbor no-till the mix into the field in late May. On August 29, they evaluated the crop. Clipping and forage testing revealed it produced 6.8 tons per acre of grazing value. Crude protein was at 3.4 percent wet and 9.6 percent dry. Relative feed value was 98 percent and relative forage quality 122 percent. “It was at least 1 ton more of production per acre than we got when haying,” Becken says. “And quality was great.”

Herd tested. The Beckens held off on turning in the cows until after the first frost in early October. The pairs had their pick of cover crop or some alfalfa/grass regrowth that wasn’t reseeded. “They camped on the cover crop,” Becken says.

The herd was selective in their grazing, picking out the species they liked best. They plan to use fencing in the future to concentrate the herd and force more even utilization. All told, it was a success. Pairs were on the field for 3 weeks prior to shipping. The steers weaned 20 pounds heavier than any previous calf crop and cow body condition improved. The cows continued to graze well into winter.

Dryland success. While the Beckens had access to irrigation, most producers Vogel works with do not. Vogel has proven cover crops can work even in the dry prairies of Montana and the western Dakotas.

“When we hold field days in late summer the only green patch in the whole area will be the cover crops,” Vogel says. She credits this to root systems of the various species tapping into different zones in the soil profile, making the mixes more drought tolerant than monocultures.

“In 2016 one of our dryland producers turned calves into his mix in mid August. In 6 weeks they showed a gain of 3.25 pounds per day,” Vogel says. Brassicas and legumes in the mix help keep protein levels high while other crops offer feed value and bulk. “The cost of that gain is very economical when compared to shipping in and feeding forage.”