Fifth generation Missouri farmer John Wood had very little hope for the beef from an animal he helped a friend harvest in 1997. The steer had only been on grass, no grain. He took the Charolais/Angus cross to a local locker and told them simply, “I don’t think it’s going to be fit for steaks.”

A few days later, the owner of the locker called back and said he thought the meat would grade low choice. “I said it can’t grade low choice,” says Wood. “I just didn’t believe it.” To check it out, Wood and a few friends fired up the grill and, just for comparison, cooked one of those steaks along with a prime Hereford steak. All three agreed: “The grass-fed beef tasted better. It was sharper, cleaner, just a really novel flavor,” says Wood.

Today, Wood and his friends ship grass-fed beef—and lamb and pork and several other meats—from U.S. Wellness Meats in Canton, Missouri (grasslandbeef.com). The company ships product to all 50 states and is quite possibly the largest internet retailer of grass-fed meats.

It still is easy to say “grass-fed beef” to a group of traditional cattlemen and get a good laugh. All beef is fed grass earlier in life, but beef finished on grass? It’s tough, chewy, and tasteless, right? Not necessarily, as a growing number of cattlemen are proving. Grass-fed beef might only be 5 percent of the beef market—that’s an estimate because the trend is difficult to track—but the market is estimated to be growing 100 percent per year. Steaks from a well-managed, grass-fed beef farm can be marbled, juicy, and tender…if the cattle grazed on something more than fescue. In other words, if they ate intensely managed, high quality forages. 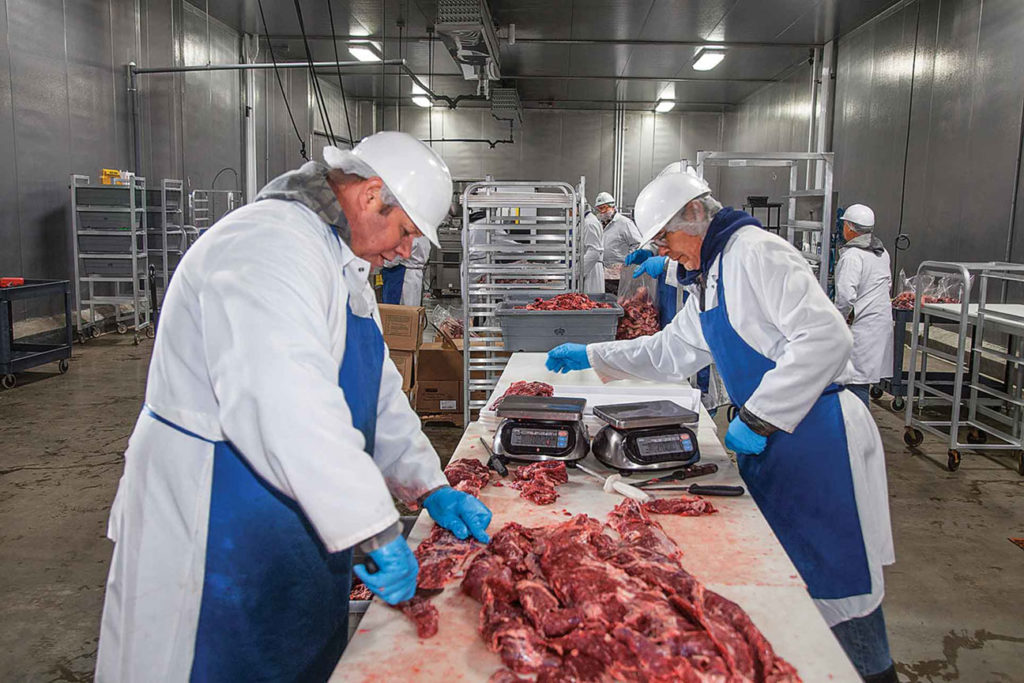 Grass-fed beef has several qualities that are of great interest to certain buyers, but all eyes are on one group in particular—the millennials, people roughly in their early 20s to mid-30s.

“The millennial consumer is the wild card,” says Wood. “They’re not your conventional buyer. They’re well-educated and well-informed. They want to know how the animals are treated. I used to laugh at that sort of stuff, but it’s a deciding factor now.”

Yes, they want to know how the cattle are treated—despite the fact that those cattle will eventually find themselves on the slaughtering floor. These consumers want to know their meat comes from an animal that spent plenty of time in the fresh air, on clean, dry pastures. They don’t want the cattle in crowded feedlots, eating something they weren’t meant to eat (grain), given antibiotics and growth hormones, and standing in mud.

Whether you agree with the perception or not, that’s the thinking: cattle finished on grass must be happier, so the “animal welfare” box gets checked. And with cattle on well managed grasslands, the same goes for “better for the environment.”

But one of the biggest draws of grass-fed beef is the potential health benefit. Last year, the Stone Barns Center for Food and Agriculture wrote an extensive, well-researched report on the state of grass-fed beef. (Go to stonebarnscenter.org and search for “back to grass.”) The non-profit organization, created by David Rockefeller, reports that grass finishing gives beef two to three times the amount of CLAs—conjugated linoleic acids—compared to feedlot beef. “CLAs are associated with many benefits, including reduced cancer risk, reduced cardiovascular disease risk, and better cholesterol levels,” the report says. A serving of grass-fed beef also has twice as many of the healthy omega-3 fats (35 milligrams) as corn fed beef. (Though anyone seriously concerned about omega-3s needs to turn to salmon—it has 1,100 milligrams per serving.)

The price premiums of grass-fed beef can vary widely. Because he sells in such great quantities, Wood’s prices at U.S. Wellness are just a bit more than conventional beef. Stone Barn’s report says the premium can be more than 70 percent at the retail level.

Several people are watching the trend to grass-fed beef, but few with as much attention as Jason Rowntree, associate professor of animal science at Michigan State University. He and his crew have about 500 Red Angus cattle on two farms in northern Michigan, and since 2010 they have focused on the production and quality of beef from grass-fed cattle.

“I really do believe this industry is going to continue to grow,” he says, adding that grass-fed isn’t in competition with corn-fed beef. There’s plenty of room for both. But he also sees advantages for grass-fed beef. One critical advantage? As interest among today’s local-food consumers grows, providing foods like grass-fed beef is a way for farmers to better connect with their urban customers. 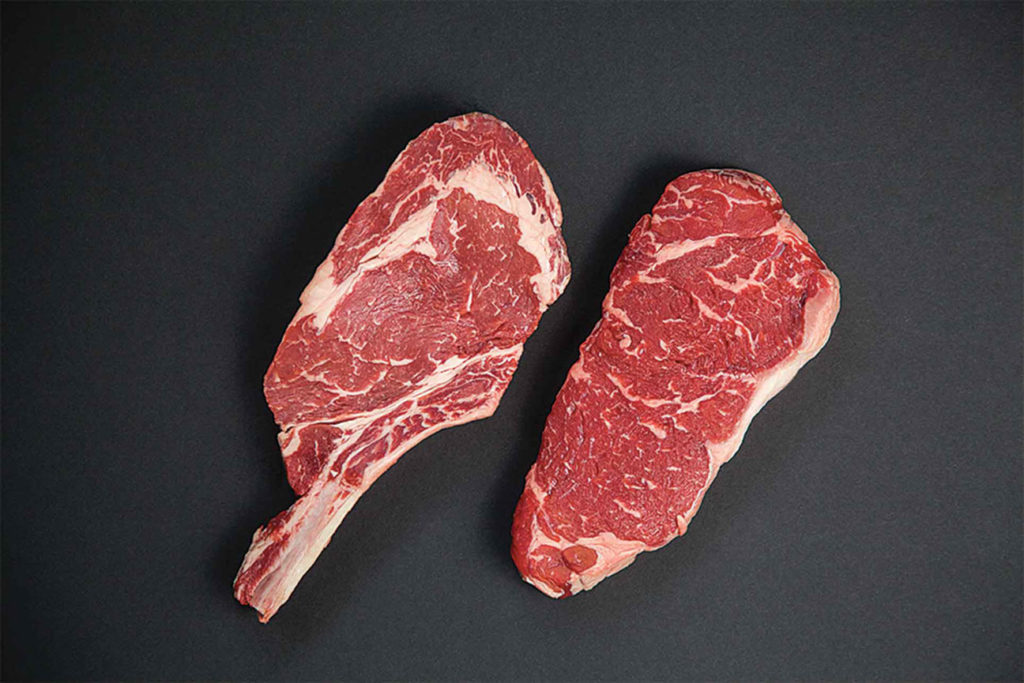 Grass fed beef can be well marbled, as both of these cuts show.

Cattle finished on grass stay in the producer’s hands until just before reaching consumers, and that can be a marketing advantage. “Consumers are more aware of where their food is coming from,” says Rowntree. “They want to know how it’s raised.” And, he says, they want to personally know the farmer.

Grass-fed beef also has the potential to bring cattle back to crop farms, which can improve soil health. To become high quality beef, grass-fed cattle need high quality forages, and it’s a good fit for crop farms that are using cover crops. Rowntree and others use combinations of brassicas, cereal grains, cow peas, and other cover crops in their mix of forages. “We can get environmental benefits from the livestock grazing, in terms of nutrient recycling and in the soils through building greater organic matter.”

In his area of Michigan, Rowntree has seen a great interest in younger farmers and newly retired people moving back to the country. “People are retiring and going back to 80 acres, looking for a new way of doing things. It’s a huge influx.” Rowntree is chairman of The Grassfed Exchange (grassfedexchange.com), which for the past eight years has held an annual conference on the subject. “Last fall we held it in New York and had over 500 people there. It’s continually growing in size.”

Jeff Rasawehr, who lives near Detroit but whose farm is in Ohio, has dabbled with returning livestock to crop farms, and he’s put together a network of farmers in Ohio and Michigan (covercropranch.com) which holds a value-added meat conference each year. Rasawehr believes the consumer recognizes the importance of cover crops in agriculture and the importance of soil health, thus the Cover Crop Ranch name he labels his meats. He teaches chefs at high-end Detroit restaurants the advantages of this way of farming—quality forages, no steroids, no antibiotics, what it does for soil health—but even chefs aren’t entirely convinced. “They want more marbling,” says Rasawehr. He now finishes his “grass-fed beef” on grain the final two months, and although purists won’t say his beef is grass-fed, Rasawehr is happy. “I do think we have to be pragmatic. The consumer likes it, the restaurants like it. We’re in a good zone right now.” 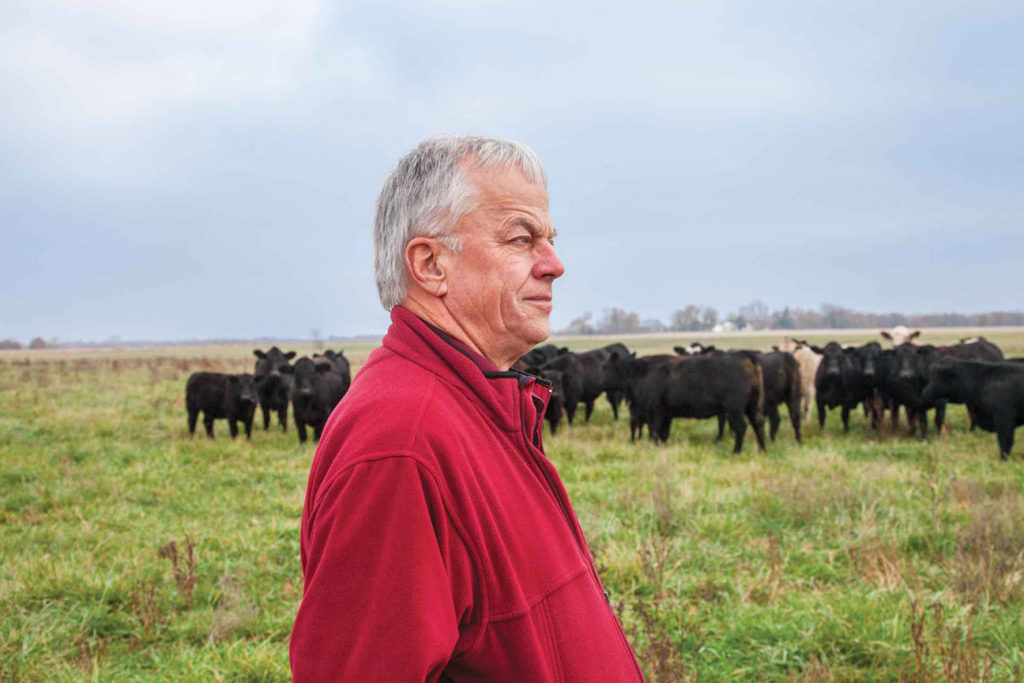 Many of John Wood’s customers are into the meat-based paleo diet. One of his customers is the New York Jets football team. They put his product on the training table every week.

When Jon Nelson bought his small farm near Midland, Michigan, in 2000, he began growing corn, wheat, and soybeans, just like the farmers around him. Nelson grew up on a farm, and though he had a good career at nearby Dow Corning, he knew he also wanted to farm. Ten years later, he began researching grass-fed beef. “I wanted to provide a food source that I could market directly to the consumer and feel good about,” he says. “I was drawn to the potential health benefits.”

Now, all of his cropland is in forages. And he’s working with his neighbors to plant cover crops after they harvest their wheat. It’s an even swap—he gets the forages, they get the soil health benefits from his cover crops.

Nelson sells in a variety of ways, but mostly it’s direct-to-consumer. He’ll sell anything from a pound of hamburger to a whole or half side of beef, and his pricing is 20 to 25 percent above commodity beef. He agrees that managing forages and how cattle feed on those forages is critical, not only to how meat tastes but also to how quickly he can move cattle to slaughter.

His pastures—with wide variety of forages, such as fescue, red clover, brassicas, oats, and many others—are divided in paddocks. Cows with calves might be given pretty large paddocks. Ten cattle about to be harvested might feed on a half acre of very lush forages.

“It’s my job to know what my customers want,” says Nelson. “I should be producing what they want rather than telling them they have to buy what I produce.”