One mile along the Columbia River connects America's heartland to the world.

One mile along the Columbia River connects America’s heartland to the world.

At an imperceptible nudge on the joystick, 4,500 horsepower of pure tugboat muscle revs quietly as Captain Steve Coles lines up the Ryan Point with a moored barge. The brand-new tug is the pride of Tidewater Transportation and Terminals, engineered to turn on a dime, and Coles—after 38 years on the Columbia River—plays it like a violin. It takes both power and finesse to ply the surface of a waterway that’s rushing towards the Pacific at 300,000 cubic feet per second.

Coles and his crew of four have already picked up a pair of 6.7-million-bushel grain barges at Pasco, Washington and dropped off an empty petroleum barge at Pacific Ethanol at Boardman, Oregon. A few yards downstream of the ethanol plant, they’re picking up a barge of empty steel containers that carry Vancouver, Washington’s solid waste to a landfill behind Boardman.

Mile-long unit trains—Burlington Northern on the north side and Union Pacific on the south—race to the Pacific Northwest’s export gateways with grain from the Dakotas, potash from the Prairies, and Fords from Detroit. They’ll get to the terminals before Coles will, but he can push a ton of grain 170 miles from Boardman to Portland with just a single quart of diesel fuel. 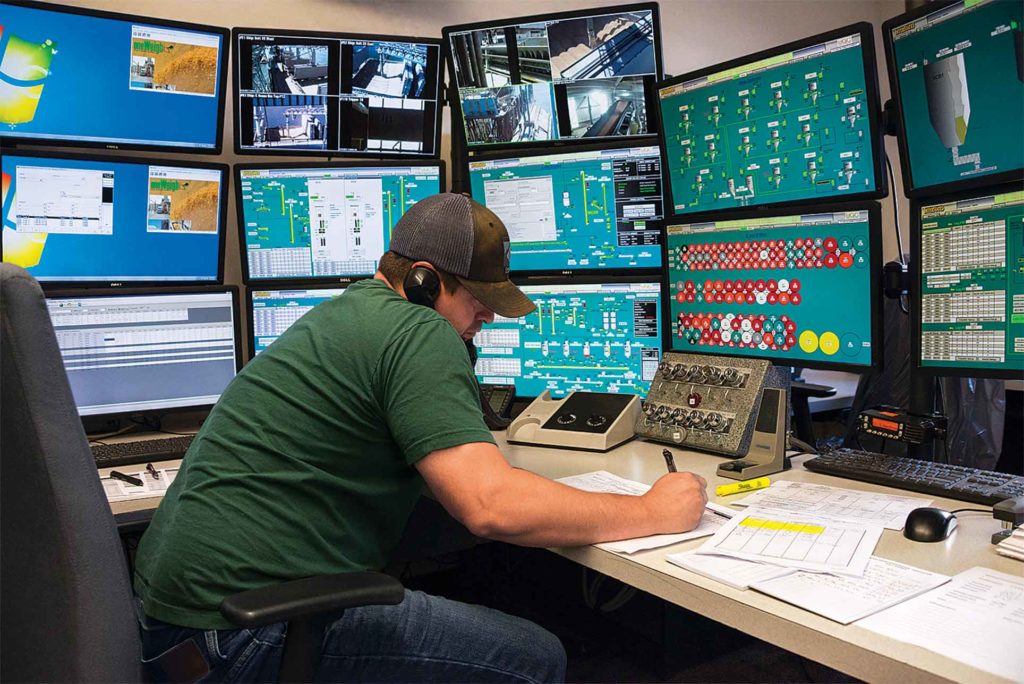 Heading downriver from Boardman, the Ryan Point will thread through three of the Columbia’s five dams, past hydroelectric turbines that powered the aluminum smelters and aircraft plants that helped win World War II and now charge huge riverside server banks that keep the internet humming.

Jeffersonian dream. Looking south through his picture window 30 feet over the water, Coles can see the khaki-colored hills of Morrow County, Oregon. Across the horizon, pivots draw a fraction of one percent of the Columbia’s flow to turn the desert into a wonderland of potatoes, onions, mint, vegetables, and alfalfa. Behind him, on the north bank, vineyards sprawl across the bluffs.

This place—river mile 270, about halfway down the 465-mile Columbia-Snake river system—encapsulates all that is great and challenging about America’s rivers. Tugs and barges, fishing skiffs, and ski boats pass by; so do threatened and endangered runs of salmon and ancient sturgeon. Crops are grown, processed, and shipped. Data is stored. And wages are earned.

Kristin Meira, executive director of the Pacific Northwest Waterways Association, says the Port of Morrow at river mile 270 is “a shining star in our inland river system.”

With 8,000 acres and a network of road, rail, plumbing, and electrical grid, the port is home to processors of everything from potatoes to cheese to data. Near a traditional natural gas electrical plant, one tenant experiments with biofuels, while another distills ethanol from Midwestern corn.

Those tenants and the port itself pay about $500 million per year to more than 8,400 workers. In fact, notes Gary Neal, the port’s general manager, Morrow boasts the third-highest county average wages in Oregon. That could help Boardman and other nearby communities hold on to the next generation with challenging, well-paying jobs. 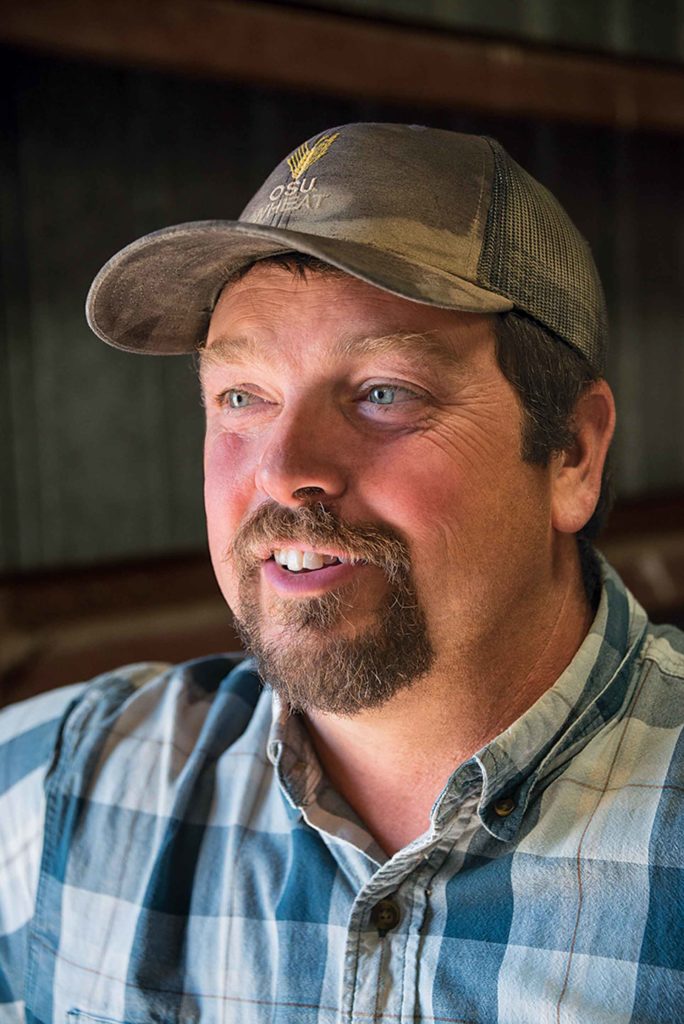 “You don’t need to move to a metropolitan area to get a job in tech,” Neal emphasizes. For electricians, lab techs, on-farm technology specialists, and others, the long-isolated Boardman area is now a prime place to be.

Strategic spot. Just 12 to 18 hours by barge from the export terminals around Portland, mile 270 is also a strategic place to be.

“The river gives us just a great transportation tool that’s safe, it’s reliable, and it does such a great job in helping us get the crop out of the interior and into the export channels,” notes Kevin Gray, general manager of Morrow County Grain Growers, a local farmers’ cooperative. Wheat—mostly soft white, some red—moves to the river from a 60 mile radius for export, primarily to Asia.

The co-op operates a 1-million-bushel elevator at the Port of Morrow, and breaks ground this month on a 600,000-bushel expansion that will allow it to transload Midwest corn from unit trains to barges.

“We’re right above the pinch point,” notes Eric Orem, a Heppner, Oregon, farmer and co-op board chair. “They’re not going to let you build any more rail lines, so you’re hitting this bottleneck in the Pacific Northwest that we’re going to try to relieve by short-stopping those unit trains in Boardman.”

Next door to the Morrow County Grain Growers Elevator, Pacific Ethanol unloads a unit train of Midwestern corn every 10 days, says manager Daniel Koch. His team distills it into biofuel and ships it to Portland refineries by barge. Twenty-five truckloads of wet distillers grains a day help feed 100,000 cattle in a 50-mile radius of Boardman, and corn oil is trucked to poultry farms in Oregon and Utah. Efficient transportation of corn and ethanol, and an eager nearby market for byproducts, minimize carbon intensity and maximize efficiency, Koch notes. 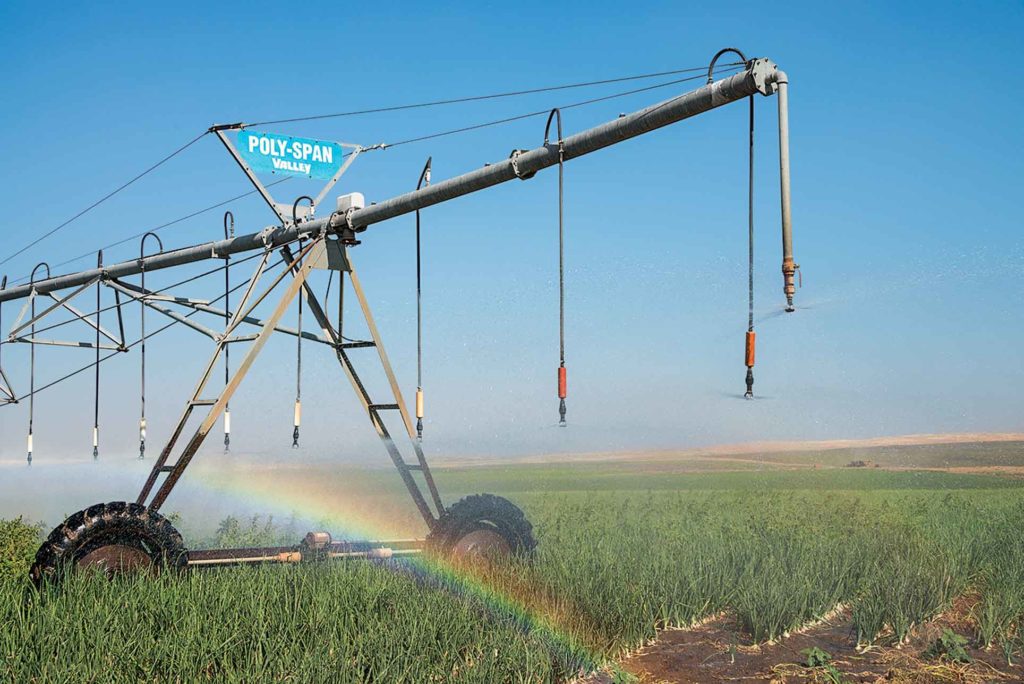 Irrigation lifeline. Connected by irrigation pipe to the river is a thriving Columbia Basin potato and vegetable industry.

Jake Madison of Echo, Oregon, says water is the difference between producing $250-an-acre dryland wheat crops every other year and harvesting vegetables and onions that can gross $6,000 an acre.

Madison’s lifeline is a 20-mile pipeline and canal system that conveys river water to his farm. He applies it sparingly through 86 center pivots, hand lines, and other irrigation systems across his operation.

Since his father secured the area’s last unmitigated water right from the Columbia in the 1990s, the Madisons have been fine-tuning the farm’s water conservation program.

Part of the effort is strategic. Madison notes that each crop on each field is analyzed for its yield potential and how much water will be available to reach it. Seeding populations, fertilizer rates, and irrigation plans are set to make the most of what’s available.

Technology is the other half of the equation. Real-time neutron moisture probes in the soil, drop tubes on the pivots, and pressure regulators have dramatically reduced water use. In all, Madison Ranches uses a little over half the irrigation water the farm applied when it started irrigating.

“We can actually grow better-quality crops with less runoff, and we’ve saved the difference,” Madison points out.

The operation also plays a key role in the environmental sustainability of the port and the local agricultural economy. Jake Madison is one of the recipients of partially treated industrial re-use water from port businesses, which he uses to supplement his irrigation rights on non-vegetable crops. 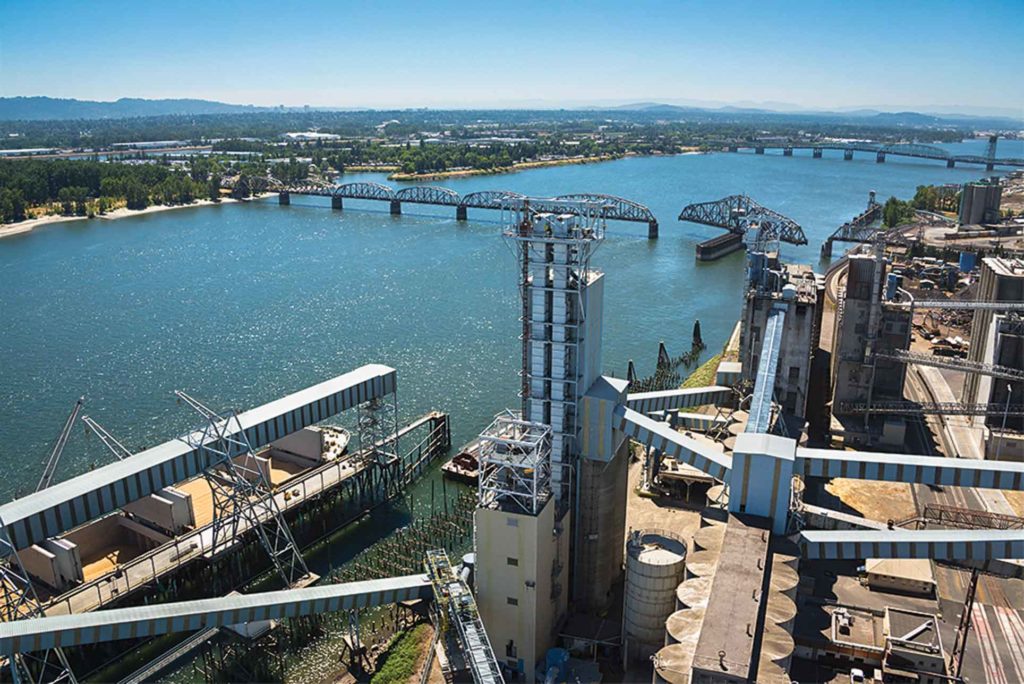 Vancouver, Washington is a U.S. grain export hub to customers in the Pacific Rim.

“It’s got a pretty good nitrogen load to it and it’s wet, so we can grow crops on it,” he says. “It’s a least-cost alternative to having them just treat it and dump it back in the river, and it allows us to continue with our rotation crops and grow crops that can beneficially use that water and fertilizer source.”

In all, the port’s water is applied on about 12,000 acres of cropland, notes Neal, making it among the nation’s largest land application systems and a huge asset to local farms.

“When you have a region that gets seven inches of annual precipitation, most places really need the water anyway, so it’s great recycling and reuse of that water,” Neal says.

Fine wine. The Columbia has always carried more than freight. Soils deposited by the glaciers and floods that gouged out the river’s path, and the wind that now follows that path back inland, support a wine industry boom. Precept Wine viticulturist Brittany Komm says the grapes from Canoe Ridge Vineyard on the north bank of river mile 270 yield great wines that strongly reflect local conditions—what winemakers call terroir.

“The river is the reason this is such a great growing site,” she says. “We are warm-to-hot in the summer. Around harvest, we cool down just enough to allow for extended hang time, which lets the grapes develop
flavor, color, and sugar. And we get the wind up here, so we get super-thick skins that give us deep, dark colors and great tannins.”

Local flavor. Back in Boardman, the Port of Morrow and its tenants decided to share other local flavors. They created the SAGE Center—Sustainable Agriculture and Energy—that annually draws more than 20,000 visitors to exhibits that range from a french fry processing line to scale models of barges.

Visitors are fascinated by the Tidewater display, which showcases the efficiency of barges. A four-barge tow hauls 14,000 tons of grain—as much as 140 rail cars or nearly 500 trucks—with fewer accidents and emissions.

“We move between 3 and 3.3 million tons of grain a year,” says Bruce Reed, Tidewater’s chief operating officer. “If all that grain had to move on another mode of transportation, it would certainly clog up the highways.”

Under pressure. A court-ordered study on salmon now in the works will weigh the possibility of breaching dams on the Snake River, 60 miles upstream of Boardman. The U.S. and Canada are renegotiating the Columbia flood management treaty. And the Columbia-Snake system must vie with other waterways for funds, notes Meira at the Pacific Northwest Waterways Association.

In short, navigation, irrigation, and power generation along the Columbia face serious challenges. Along the river’s length, a broad range of users vie to describe its importance.

“It’s a showpiece,” says Neal. “It’s the multiple uses that make it work. We’re pretty proud of it, and protective of it as well.”

Editors note: Be sure to check out the first of our three-part accompanying video series, “River Mile 270,” and watch the John Deere Facebook page for upcoming episodes.