Commoners and kings have long desired to understand the elusive ingredient that determines fortune or famine—rain. They want to hear her voice, as Walt Whitman wrote in an 1885 poem included in his famous “Leaves of Grass” collection: And who art thou? Said I to the soft-falling shower/Which, strange to tell, gave me an answer, as here translated/I am the Poem of Earth, said the Voice of the Rain…

Scientists have been listening quite closely to the voice of the rain in recent years, and it tells a story of remarkable change. For example, those “soft-falling showers” aren’t coming as often as they did in Whitman’s day; a higher percentage of rain falling on the central U.S. during the growing season comes from downpours.

“For the last several years on my farm, we are seeing five- to eight-month periods of abnormally dry conditions, then we receive nearly half our annual rainfall in a period of only four to eight weeks,” says Gail Fuller, a farmer from Emporia, Kan.

“The challenge is to adapt, to find ways to allow that water to infiltrate, and store it in the soil,” he says. “Three inches of rain does no good if two-and-a-half inches of it runs off.” 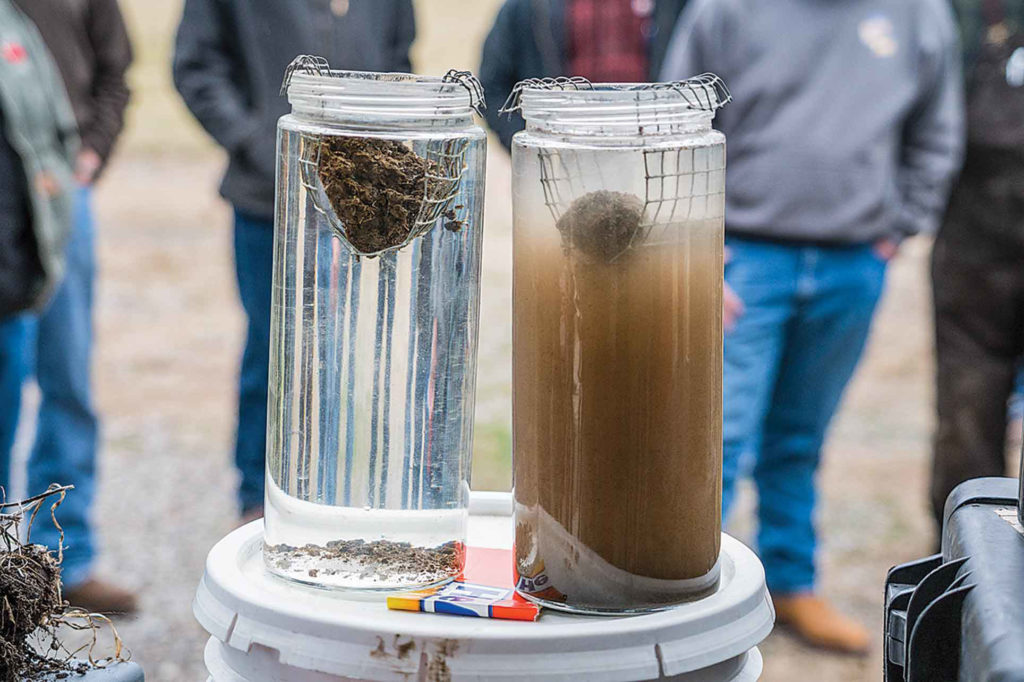 Healthy soil holds together with the help of microbial “soil glue” while soil from conventional tilled field falls apart when saturated.

Storm surge. Scientists conducting the third National Climate Assessment for the U.S. reported that heavy downpours are increasing nationally, with the largest increases in the central Corn Belt states along with the northeastern states. But these scientists also predict that frequency and intensity of extreme precipitation events will affect all U.S. regions.

Ruby Leung and her colleagues at the Pacific Northwest National Laboratory wanted to find out what might be driving this trend. These researchers focused on mesoscale convective systems (MCS)—large, organized thunderstorms that often produce extreme precipitation and flooding.

“These are not isolated thunderstorms that dump some precipitation but then are gone within a very short time,” Leung points out. “The mesoscale convective systems typically cover at least 100 kilometers and they  last at least nine hours, with some of these systems lasting 24 hours.”

The researchers compiled a 35-year MCS database based on North American Land Data Assimilation System observed precipitation, validated against a shorter satellite-based record. Their analysis showed that total warm-season precipitation in the central U.S. is rising at a rate of 11% per decade, due to increasing duration and frequency of mesoscale convective systems. However, the amount of precipitation from non-MCS rainfall events is on the decline in this period. 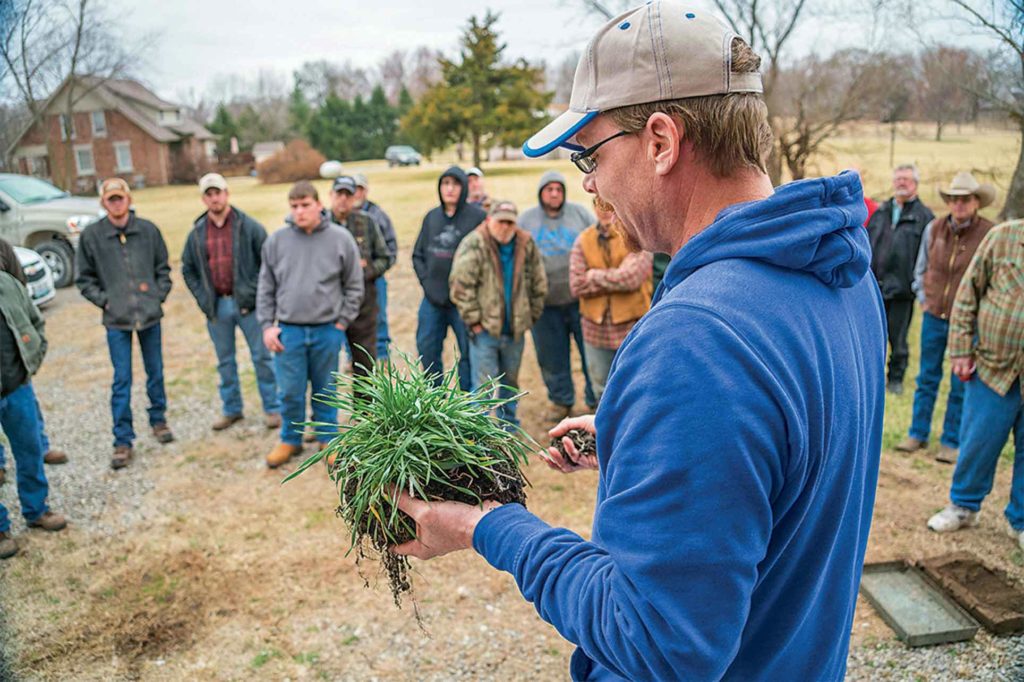 Night moves. This study found that one of the most important factors behind this increase in MCS intensity and longevity is a strengthening of the Great Plains Low-Level Jet. This provides a continuous supply of low-level unstable warm and moist air pulled from the Gulf of Mexico.

“Temperature has been increasing in the last 35 years, with land warming faster than the oceans,” Leung explains. “The increasing temperature gradient between land and water strengthens the low pressure system that pulls moisture from the Gulf of Mexico. This provides an increasing amount of moisture to feed the mesoscale convective systems, and we think that explains why the MCS events have been increasing in terms of frequency, as well as lasting longer and producing more precipitation.”

This low-level jet also helps storms over the central Corn Belt last well into the night. These large convective storms often start in late afternoon east of the Rocky Mountains and build as they move east. They reach the Midwest at night, when the low-level moisture transport from the Gulf of Mexico also reaches a maximum. “This is a nocturnal low-level jet, typically very active at night, transporting a lot of moisture to the central U.S.,” Leung says. “When moisture from the low-level jet meets the mesoscale convective systems, that’s when the systems grow bigger and dump a lot of precipitation. The MCS storm tends to be a nighttime phenomenon.”

At Iowa State University, Eugene Takle, director of the Climate Science Program, looked at the number of days that farmers in his state received an inch-and-a-quarter or more of rain in a 24-hour period. “The frequency of big rains has doubled since Grandpa ran the farm,” he says.

It’s the humidity. Takle also is finding a seasonal trend: springtime precipitation is on the rise, but autumn moisture is declining. He points out that the humidity level in Iowa has risen substantially over the past 35 years; the summertime dewpoint temperature rose by 3.5 degrees F in Des Moines over this time frame. “That means the atmosphere is holding about 13 percent more moisture,” he says. “Higher amounts of atmospheric moisture means that more water is available to fuel thunderstorms.”

Dealing with this additional atmospheric water is going to be one of the most important jobs for agriculture over the coming decades, predicts Walter Jehne, director of Healthy Soils Australia. He spoke at Gail Fuller’s recent Farm School, encouraging farmers to help restore hydrologic cycles. 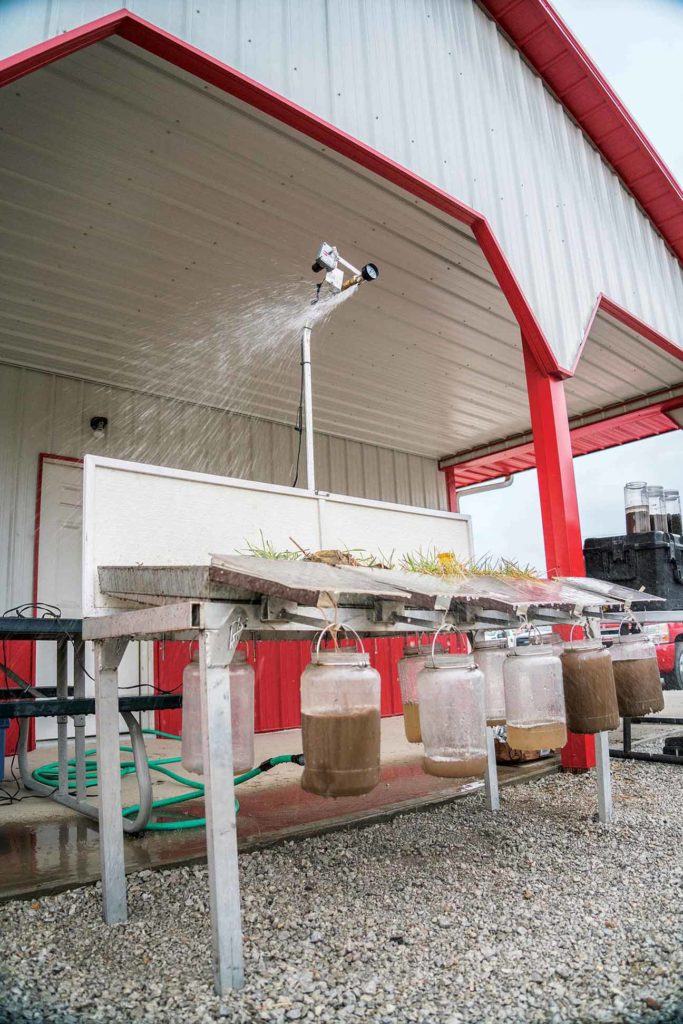 Two rows of jars tell the tale at this rainfall simulator: One row holds runoff, the other catches infiltration from the soil profile, under trays of soil from various management systems.

Though carbon dioxide levels are at the forefront of climate debates, Jehne argues that this greenhouse gas is only a symptom. “Over the past 4 billion years, carbon dioxide levels have been as high as 950,000 ppm to as low as 100 ppm; but 95 percent of earth’s heat dynamics were—and still are—governed by its hydrology.”

Carbon sponge. Jehne lists a number of ways that farmers can help restore the water cycle and counter the weather extremes. Restoring healthy soils as earth’s “soil carbon sponge” will improve infiltration, allowing rainfall to be stored to sustain green plant growth for a longer time, and over wider areas of land.

Jehne also points out the need to reopen nighttime radiation windows that have been blocked by increased humidity. “This is responsible for 60% of the observed global warming effects to date,” he says. “By opening this window, we can cool nighttime plant surfaces, and that will enhance the condensation of dew that can contribute to much of the plant’s water needs and survival, particularly as climates start to aridify.”

Buck the trend. Asking farmers to help change the climate may sound impossible, but it is becoming apparent that the rain not only has a voice; it listens as well. Award-winning research at Montana State University shows how land-use changes, including conservation, impact climate.

Paul Stoy, a professor of land resources and environmental sciences in MSU’s College of Agriculture, is studying a large region of the Dakotas extending into Canada that has shown a 40-year trend of summertime cooling. His research shows that this likely is due to a reduced amount of land held in fallow, in favor of being planted using no-till.

“Tens of millions of hectares that used to be kept fallow in summertime are now planted, so there’s more water entering the atmosphere and less heat,” Stoy points out. “This is likely underlying the increase in cloudiness and precipitation, and the cooling trend that people have been seeing only in the summertime.”

Doug Peterson, the Iowa/Missouri regional soil health specialist with the USDA’s Natural Resources Conservation Service, is keeping a close eye on such research. “I think we are just touching the tip of the iceberg in how land use can impact a local rainfall pattern,” he says. “It looks as though the amount of bare soil, the amount of perennial vegetation, the percentage of land protected by a cover crop—all of those factors are playing a part.” 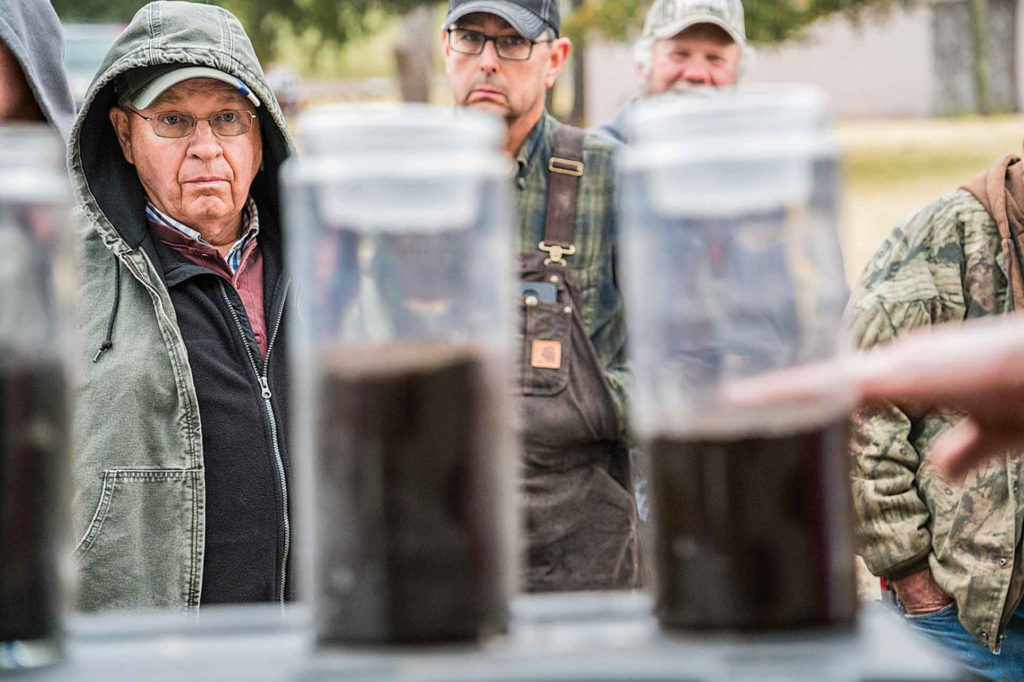 Farmers get a first-hand look at infiltration rates during a demonstration at a Missouri field day.

Make it rain. NRCS continues to promote the need for soil health. An interconnected network of pores associated with crumbly, highly aggregated soil allows water to infiltrate rapidly—while also allowing air to move through the soil and providing ideal habitat for soil organisms.

A rainfall simulator, such as the one shown here at a Caldwell County, Mo., Soil and Water District field day, is one of the key teaching tools. The device simulates a rain event impacting several pans of soil; these typically range from fully tilled soil to long-term no-till soil protected by a cover crop. A row of jars in front of the device catch runoff; the color of the water in the jars indicates how much sediment left the field. A second row of jars collects water that has passed through the soil profile.

Always a big surprise is when an NRCS official turns over the pan with tilled soil, only to reveal that the
bottom of the pan is bone dry. “Tillage closes pore space and prevents infiltration,” Peterson points out. “Job 1 is to capture that water.”

Cash In On Covers

Farmers are finding the payoff from healthy soils.