The train squeals its way into the steel shed, a mile-long string of cars hauling 22 million pounds of wheat from Conrad, Montana. An alarm sounds, ringing like a giant telephone. Shunting from side to side on a neon-yellow cart, a worker controls a spinning steel shaft that opens the hopper bottom of the car and releases a hissing flood of golden grain to a massive belt below the rails.

In eight hours, she and her partner will empty this train and send it on its way. The wheat, sorted by type and protein content, will be resting in one of about 200 towering concrete bins that make up United Grain’s export terminal in Vancouver, Washington.

But it won’t rest long. In 24 hours, a freighter will pull up to the dock, its huge steel doors will be lifted open, and the Montana wheat will be augered out of the bins and rained into the hold of the ship. The day after that, it will be heading down the Columbia River on its way to customers in Asia. 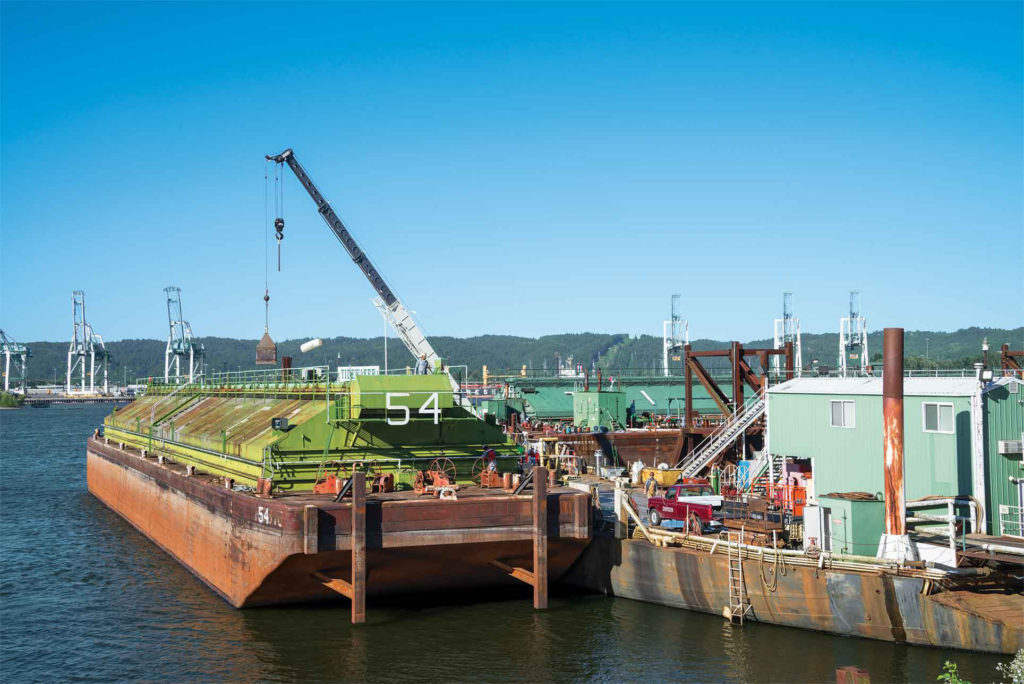 “We try to get the right trains coming at the same time as the vessel,” explains John Lindgren, the director of United Grain’s Vancouver export operation. “So if a vessel is going to take five or six trains to load, maybe we have four of them in-house and the fifth one ready to be in the house, or actually unloading.”

That’s no small feat. Export sales contracts are written by grain merchants months in advance, and the owners of the vessels schedule in two-week windows. As a ship’s arrival date approaches, Lindgren and his crew juggle inbound grain, scheduling barges and conducting daily conference calls with Burlington Northern to track the progress of 100-car unit trains around the country.

The goal is to minimize how long grain sits in the silos without getting caught empty. When grain sits, capital is idle. When ships sit, charges can run many thousands of dollars per day.

Lindgren’s team plans to the hour, but a rock slide on the track, a snowstorm in the Midwest, or a failed ship inspection at the mouth of the river can throw their schedules off by days. 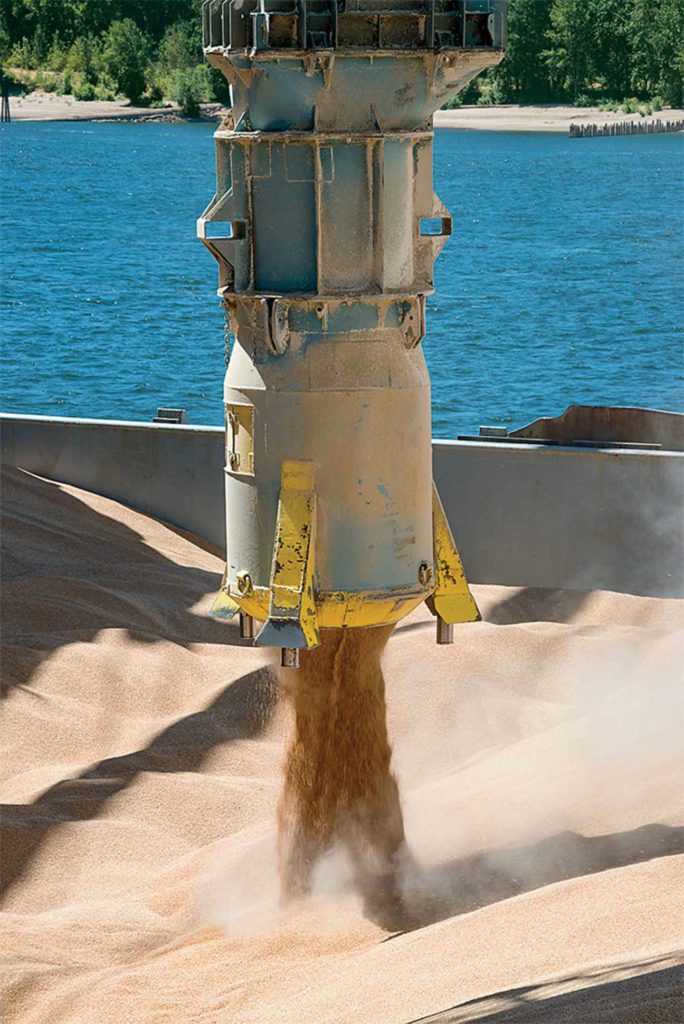 First movement. The first movement of the logistical symphony is the inbound flow of grain. About half of the river’s wheat exports—about $1 billion worth—travel by barge from elevators almost 400 miles upriver.

Each of the boxy barges carries about seven million pounds of wheat. That’s 120,000 bushels, enough to fill 35 jumbo hopper rail cars or 134 trucks. At United Grain’s dock, wheat is scooped out and shunted to the bins at a rate of a million pounds an hour.

A hundred yards away lies the rail yard—five load tracks and two additional tracks that can each accommodate an empty unit train, or shuttle.

The team on the yellow carts with the massive, spinning screwdrivers can keep the trains flowing through the yard. What worries Lindgren is the prospect of empty cars piling up, which could create a backup that blocks the next loaded shuttle.

“The railroad has to get our empties out of the way or we’re dead in the water,” Lindgren points out.

The conductors. In the office a stone’s throw from the tracks, two supervisors direct the complex movements as the symphony picks up its pace. Surrounded by banks of flat-panel screens, Keith Anderson juggles the flow of incoming grain. 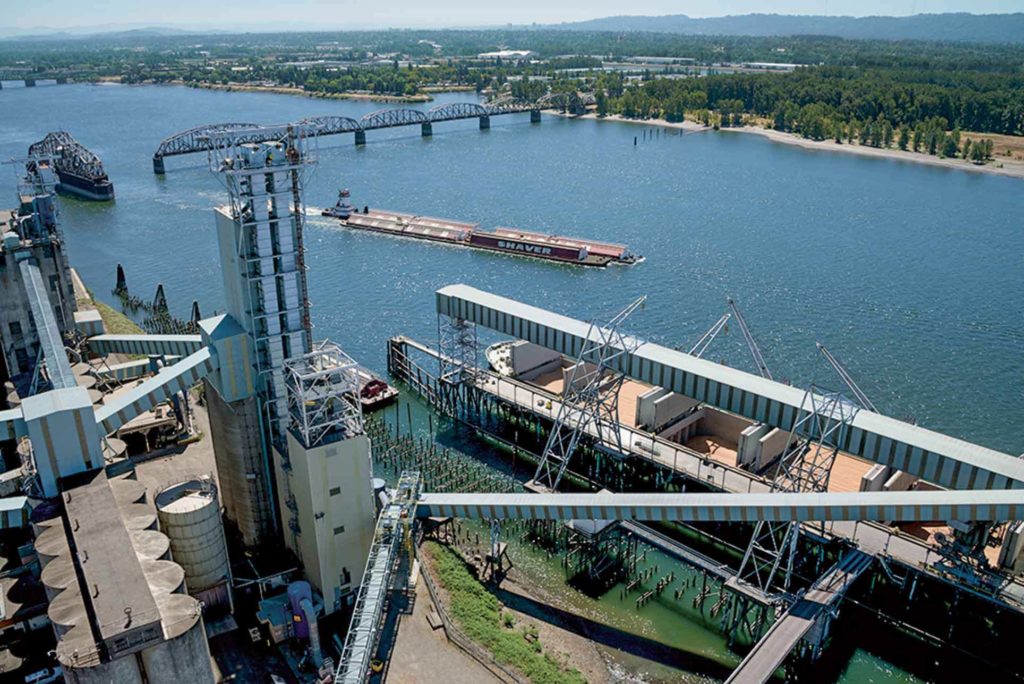 Freighters are loaded in a specified order to maintain balance.

His screens glow bright with color—orange for winter wheat, red for spring wheat, green for soybeans, yellow for corn, and white, grey, and black. The biggest three are each capable of holding 135 to 145 rail cars’ worth of corn. (Lindgren leaves a cushion of 200 tons at the bottom of each just to reduce the chance of breaking kernels as they drop in from the overhead belt.) Other bins look narrow as stovepipes, though they each hold 20 to 22 cars’ worth of wheat. Even the space between the cylinders is used—they’re called “star bins,” and each can squeeze in enough grain to empty another four or five jumbo hopper cars. He directs the Montana wheat into bins all over the facility, sorting it by protein level and location to set up his counterpart who will load tomorrow’s freighter.

That’s vital for efficiency. Outbound controller Dan Peters orchestrates the movement of three belts-—two that can handle 500 tons per hour and the third operating twice as fast. Anderson distributes the incoming grain among the bins so Peters can make the most efficient use of all three belts.

As he feeds the belts from the bins, Peters also balances his withdrawals to blend the load to meet spec on protein content and dockage. Think about patting your head while rubbing your belly…and playing the clarinet.

Quality check. From the room next door, there’s a quiet clatter as samples are shared by State of Washington inspectors, who collect wheat at the mixing scale every 30 seconds. From 1,000 grams—about enough to fill a dog bowl—the graders certify the protein count of the sample. Other grades can be taken on samples of as little as 15 grams. That means as much as 1,380 tons of wheat are assessed on the condition of just a handful of grain.

Grand finale. As the belt rumbles the wheat from the elevator to the dock, a PECO driver directs a massive nozzle back and forth across the hold of the ship 42 feet below him.

Loads of different protein content or even different types of wheat are divided into different holds, or separated by 130-by-130-foot tarps.

The operator works from a stow plan provided by the ship’s captain, which accounts for balance, draft (how deep the bottom of the boat will ride), and strain on the hull. From the plan, he knows the order of hatches he’ll load and how full to load each one.

“It gets dialed in very tightly,” says Lindgren. “We’re trying to be as efficient as we can with how it happens.”

In hours, loaded till its hull is just inches from the bottom, the ship’s lapping bow wave will play the last movement in the logistical symphony.