Like new actors on Broadway, new products and practices in agriculture have to prove themselves to make it to the big stage. When that stage is the 20 million irrigated acres of the High Plains, many manufacturers and entrepreneurs look to the Irrigation Research Foundation farm in Yuma, Colorado, to get their shot.

The Irrigation Research Foundation (IRF) farm prides itself on being able to provide precise and reliable data on the impact of products and practices that research cooperators bring to it. Last year’s 26 cooperators tested everything from the optimum population of corn hybrids to a product that helps the soil breathe. Many cooperators publish results of their studies on IRF’s website, found at http://irf-info.com. G

“People come to us because we have the tools in place to make applications, monitor and record data, and report results very precisely. We’re not talking about just comparing one half of a pivot to the other,”
says Corey.

Precision tools. IRF’s 320-acre farm is monitored by a network of 40 soil probes that use the latest instrumentation to determine the impact a product or practice has above and below the soil. The sensors, installed and monitored by the consulting company AgriMeasures LLC, document the underground condition of soil nutrients, water, and plant roots.

“At the IRF we serve to verify and quantify claims made on behalf of products relating to the movement of water into the soil and the use of water and nutrients by plants,” says David Lankford with AgriMeasures. 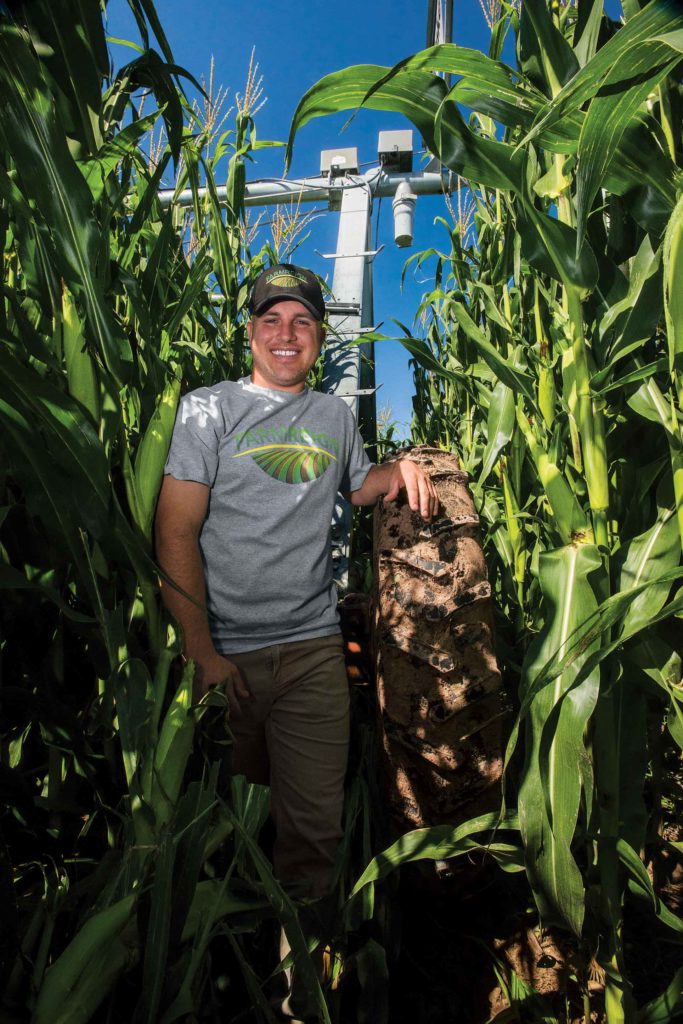 The farm’s Reinke variable-rate irrigation systems allow water to be targeted to areas as small as 1.2 acres. Reflex irrigation control panels—made by Agri-Inject—on three of the five systems allow fertilizer, fungicides, and other crop inputs to be injected at very precise rates and positions.

A recent addition to technology on the farm is a custom-built 12-row planter modified to provide the ultimate in precision and flexibility. The FarmReign design is functionally
operating as three, four-row units and is capable of planting dual hybrids at varying rates with the ability to vary fertilizer application rate and position in individual planter rows.

“One row in each four-row section is equipped to provide data on soil temperature, moisture, organic matter level and crop residue in the seed furrow,” says FarmReign’s Luke Cure.

Research results. The IRF was founded in 1994 by a group of 30 area producers who took over a former DeKalb seed testing location. “Our research on limited-irrigation generally went unnoticed until the past decade as area growers struggled to comply with a court ruling that Colorado comply with terms of a 1943 water-sharing agreement with neighboring states.

“Suddenly, there was a lot of interest in growing corn with less water and that interest has grown,” says Corey. “For example, in all of 2011 our website saw 6,000 hits but in the first six months of this year we’ve had 56,000.”

Corey says confidentiality agreements prevent him from discussing many research results, however one of the farm’s major accomplishments has been proving that growers were overwatering during fertigation and flushing nitrogen below the active root zone. “We found growers were flushing nitrogen 62 inches deep while the crop was feeding at a
20-inch depth.”

While cooperators include major seed and chemical companies, they also include local growers like Nathan Armstrong, who is using the IRF to validate fertilizer savings to promote his custom manure spreading business. Meanwhile, that product that helps the soil breathe—AgpHRx from Nano AG Technologies—showed a 24-bushel per acre advantage in corn.