Dennis Pinar of Klein Farms holds a group of eighth graders rapt as he reveals the outcome the Great Pumpkin Experiment—a Halloween pumpkin that had been stuffed with paper and 100 earthworms seven months before and left to Mother Nature’s devices. As he tips the bin so the kids can see the teeming worm population, he launches into a deep dive
on composting, local soil quality, and the profit potential in worm castings.

Pinar farms wheat and canola outside Almira, Washington, population 284, whose water tower rises like a lonely mast bobbing on a sea of wheat.  He points out that although the scene is pure farm country, most of the kids in the local school have little real exposure to agriculture. Their parents are much more likely to work at Grand Coulee Dam, nearby state or national parks, or in the regional hospital, schools, or service businesses.

“It’s amazing in a farm community how many of these kids don’t come from farms,” Pinar says, scanning the faces of his daughter’s class. “There are five farm kids in this class. The rest are ‘city kids.’ Last year, when I brought over one of our chickens, out of a hundred-some kids, there were less than five that would pet it.”

Teaching opportunity. Last May, about 180 students from Almira and nearby Coulee City zigzagged around Klein Farms during an agriculture field day organized by Almira teacher and farmer Susan Douglas. Douglas specializes in science, technology, engineering, and math (STEM), and recognized that agriculture is a perfect forum for hands-on STEM learning. 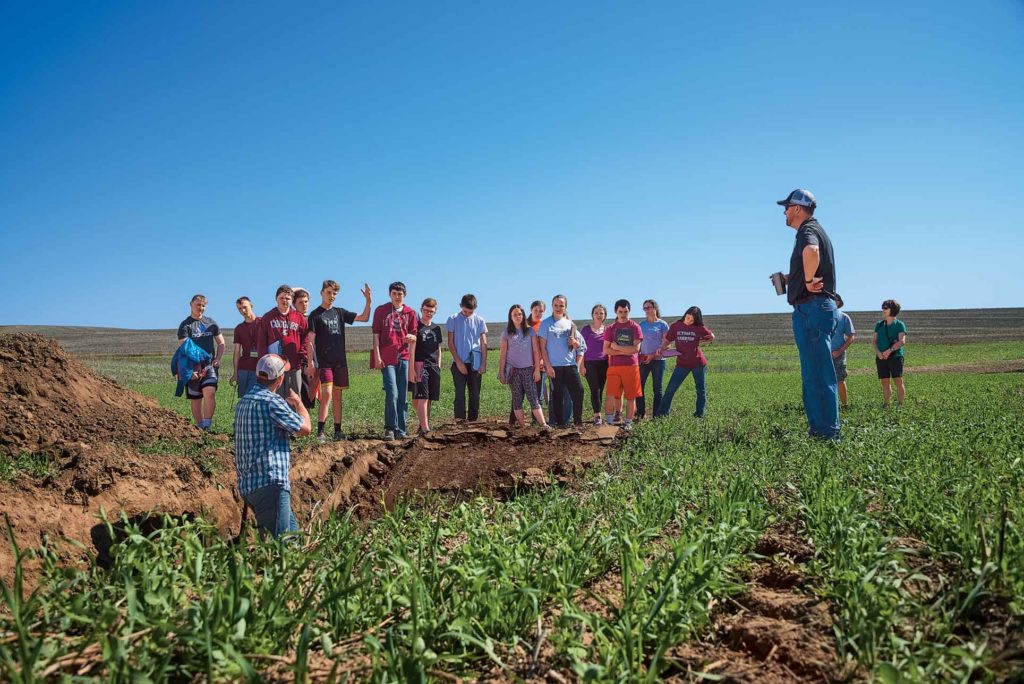 “It’s bringing the walls down in our educational system,” explains the long-time teacher. “It’s not like we pour knowledge over them. They need to have an access point and be able to experience how things happen. When they create that foundational background, we can build on that.”

On the farm, groups of elementary and middle school students ask a local co-op agronomist about crop protection and fertilizer. They explore a soil pit, and discuss cover crops, plunge their hands into buckets of canola meal, and identify key components of a combine and air seeder.

At school. Back at school, the students are scientists and statisticians, engineers and farmers and artists.

Classrooms are decked out with microscopes, art supplies for painting with soil and printing with apples, potting soil for planting canola seeds, and Legos for building grain elevators. The music teacher works with students to graph the results of apple tastings, while her brother uses a nearby room to walk kids through the biology of the apples in the family’s orchard.

And between school and the farm, bus loads of kids at the local elevator crunch the numbers on grain deliveries after touring the facility.

At the elevator, HighLine Grain Growers’ Marvin Clinesmith is as enthusiastic as the kids around him.

“It’s a wonderful deal in these communities when we make sure kids are part of who we are and what we do,” Clinesmith points out. 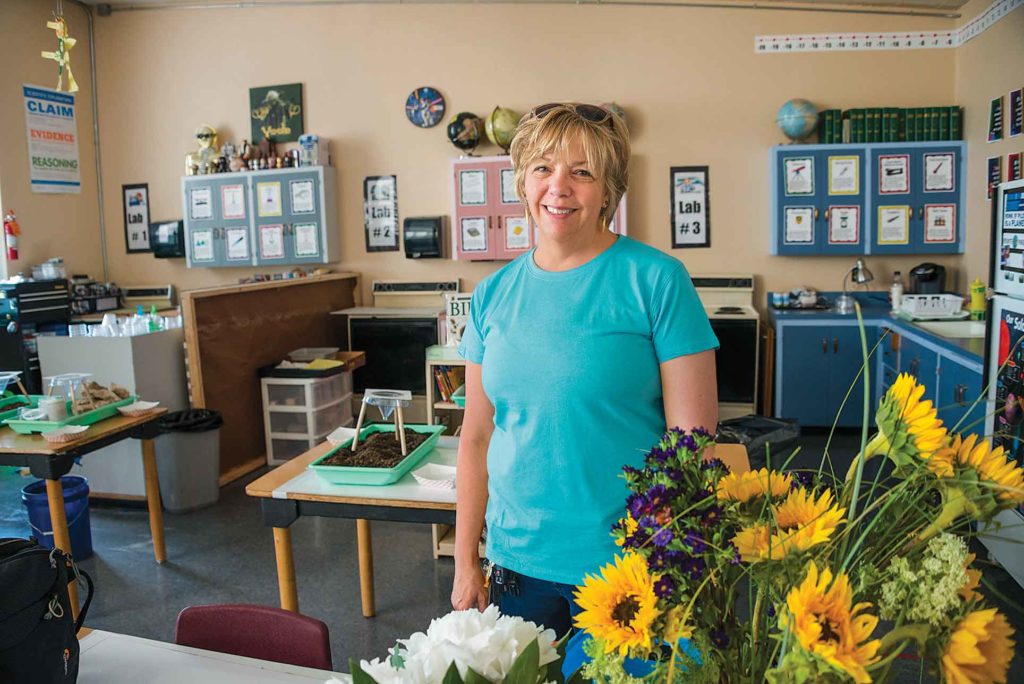 Larger vision. On top of the immediate lessons in math and science, Douglas hopes some of the students begin seeing a place for themselves in some aspect of agriculture.

The involvement of the community is vital, Douglas adds. For her first ag day in the winter of 2017, she convened a five-person steering committee that included the school superintendent, a farmer who also serves on the board of education, and agribusiness leaders. Beyond the planning group, dozens of people volunteered to share their time and expertise during the event.

“I’ve never had a ‘no’ when I ask people, ‘Will you come into the school?’ ” Douglas notes. “People want to be part of the learning community.” 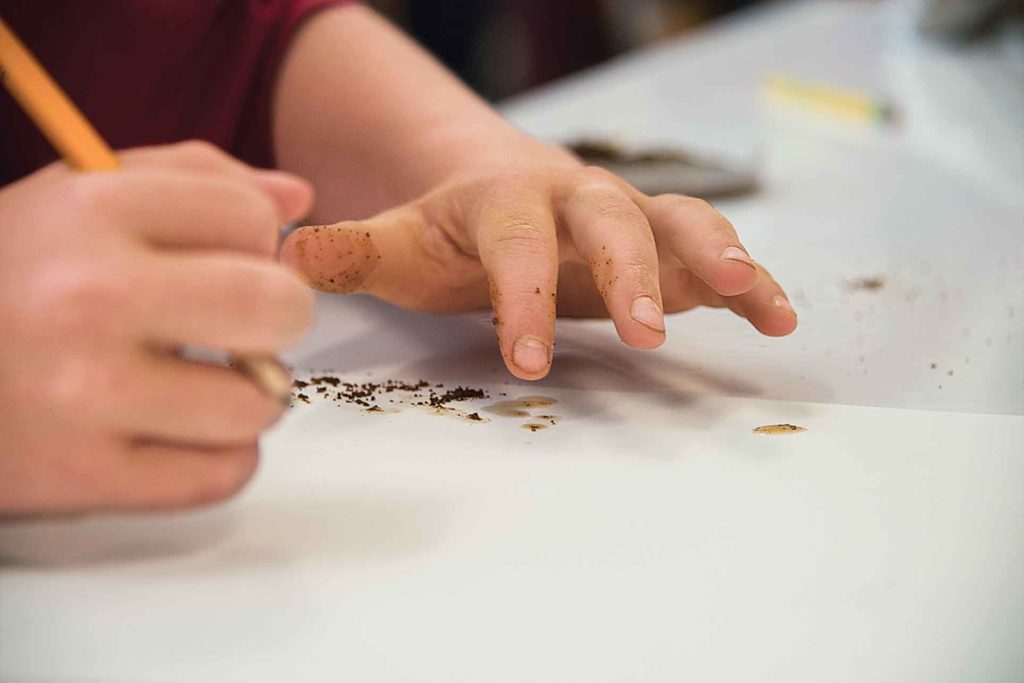 “If we didn’t have our volunteers, we couldn’t afford to do it,” says Shauna Schmerer, Almira’s school superintendent. “There are districts that spend tens of thousands of dollars on curriculum. We’ve got the soils. We’ve got the seeds. We have the best in the field, people who do this every single day. Our farming equipment people bring out farming equipment, so we aren’t renting anything. We spend less than a thousand dollars and these kids get exposure they’ll remember all their lives. How do you beat that?”

Takes a village. Throughout the day, students chatter excitedly. Dani, a third-grader, is entranced by the animals in the rotational pasture beside Pinar’s house. Payton, a fourth-grader, is impressed by how combines separate wheat from chaff. Eighth-grader Casan, whose father drives a spray rig, is proud to see other kids learn some of the things his dad shares with him. And second-grader Ariana walks observers through her Lego grain elevator, which features a traffic light and multiple defenses against mice.

Schmerer smiles as students and volunteers set up for the next session.

“Everybody says it takes a village,” she points out. “Well, it takes a small-town community.”

In fact, Susan Douglas figures a farm town like Almira may just be the perfect place to teach STEM.

“I don’t think we have to spend a lot of money to bring in the best technologies,” she says in the shadow of a tractor. “We’re surrounded by them.”