Coiled into the chromosomes of every cell in a living organism is the double-helix molecule called deoxyribonucleic acid, or DNA. The DNA molecule is only about 20 angstrom units in diameter—a mere 1/79-billionth of an inch—but it contains a long string of chemical “letters” that spell out an instruction manual for every part and process needed to support life in an organism.

This genome contains a lot of letters; about 2 billion if for a corn plant, nearly 3 billion for a human. It would take about 50 years for a typist, cranking out 60 words per minute for eight hours a day, to get that many characters on paper.

And it produces what appears, at least on the surface, to be a pretty darn boring read. There are only four letters; they represent cytosine, guanine, adenine, and thymine, the four nucleobases that, in various combinations of C,G,A, and T, describe genes and other genomic factors that determine the characteristics of a plant or animal.

To a scientist, however, those strings of letters sometimes describe a puzzle worthy of a good mystery novel. It was just such an enigma that eventually produced a precise new tool for genome editing, called CRISPR-Cas, with potential to impact the agricultural landscape in the 21st century.

“What makes CRISPR such a powerful, revolutionary technology is its precision,” says Kan Wang, an Iowa State University agronomy professor and co-director of the Crop Bioengineering Center. “It brings a new level of efficiency to plant breeding.

“Conventional breeding requires us to throw darts and hope we hit the target,” she continues. “With CRISPR, we now can just walk up to the dartboard and put it in the bull’s-eye.” 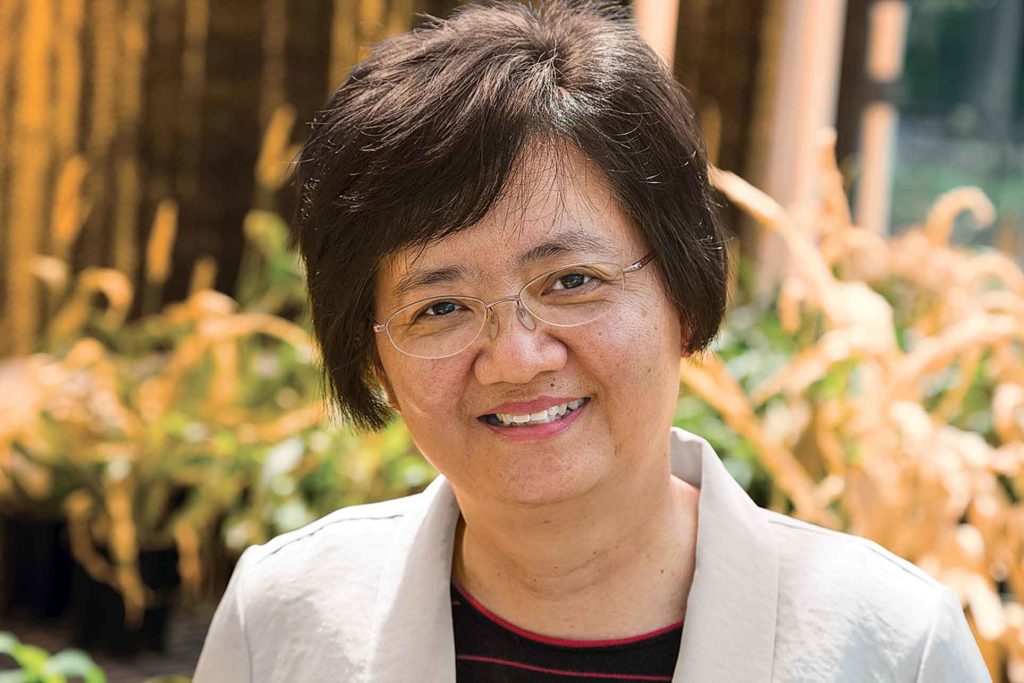 Letter perfect. The story traces back to 1987, when Japanese researchers were studying a region of the genome in a bacteria, E. coli. They found—but could not explain—five identical DNA sequence repeats, which were separated by non-identical DNA “spacer” sequences. Further research with bacteria, such as those used in making cheese and yogurt, also identified regularly spaced repeats of DNA sequences. Adding to the mystery, scientists also found that these repeats were palindromes—the letters read the same whether spelled out left-to-right or right-to-left.

Scientists named this phenomenon “CRISPR,” an acronym for “clustered regularly interspaced short palindromic repeats.” Some adjacent genes were given the designation of “Cas,” to indicate CRISPR associated genes. Researchers took another step in solving the mystery when they realized the spacer “letters” represented short genetic sequences associated with viruses. Scientists were aware that some species of bacteria protect themselves from viral intrusions by setting loose molecular “scissors” that slice and dice the genetic code of their viral invaders.

Further study confirmed that, indeed, CRISPR-Cas is a bacterial immune system. Bacteria that survive a viral infection grab sequences from the invader and stash it away in their CRISPR loci. The bacteria then are resistant to any subsequent attack from that specific virus.

By 2012, scientific journals published papers that described the next step; how this CRISPR-Cas system could be used in editing a genome. A protein from the Cas9 gene provides the molecular scissors, while a short stretch of guide RNA points the way to the DNA sequence to be cut. These papers made it clear that the CRISPR-Cas tool could be programmed to recognize and edit virtually any DNA sequence from any living thing—plant or animal.

Iowa State’s Wang points out that CRISPR-Cas becomes an extremely powerful tool when teamed up with knowledge gained from sequencing the genome of important agricultural crops and livestock. “You can think of the corn genome, for example, as a text document,” she says. “Then think of CRISPR as a word processor. You can place your cursor where you want to make a change. You can delete letters, change the order of letters, or even add a word to improve the text. The CRISPR-Cas system can help make improvements to just about any aspect of a crop, from better yield to improved resistance to disease.”

Waxy win. Using a genome-editing tool also can help speed the development of plants with a desired output trait. In fact, the first CRISPR commercial ag product to hit the farm gate likely will be a Pioneer waxy corn hybrid that is well on its way through the development pipeline.

“We thought that waxy corn would be an ideal choice for our CRISPR-Cas advanced breeding program,” says Nandini Krishnamurthy. She’s a senior research manager for Corteva Agriscience, Agriculture Division of DowDuPont, who specializes in trait discovery and optimization. 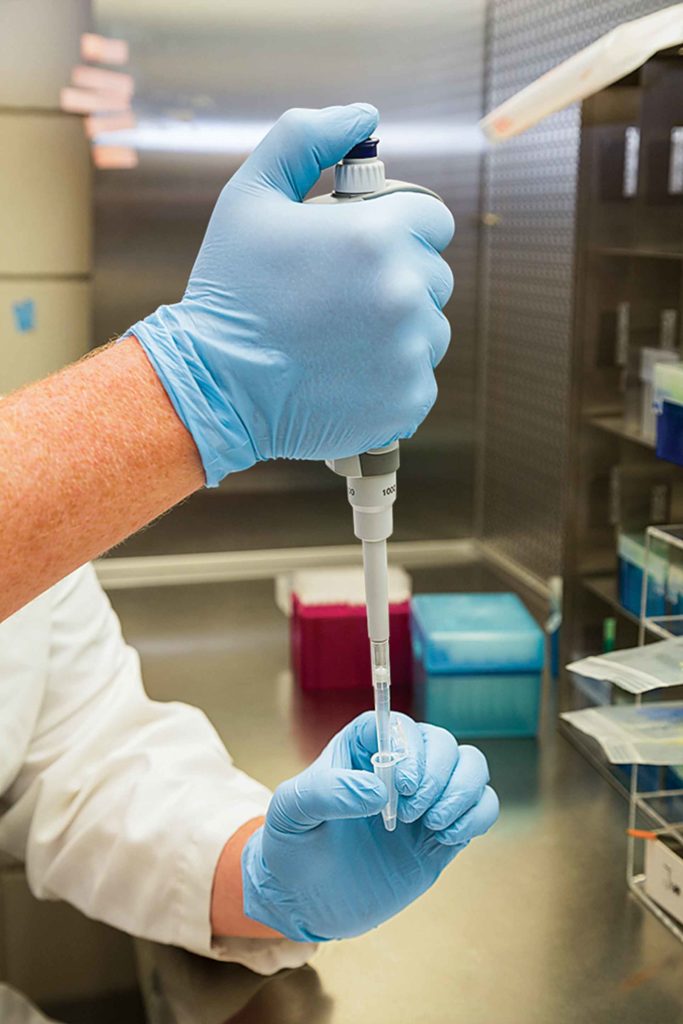 A solution of a Cas protein along with a section of guide RNA begins the CRISPR process.

Waxy hybrids have been around for decades, developed through conventional breeding; these conventional hybrids have a naturally occurring partial deletion of the waxy gene responsible for amylose production in the kernel. As a result, nearly all the starch in the grain is amylopectin, a starch that has desirable properties used in foods, as well as in paper, textile, and adhesive industries.

Krishnamurthy points out that, since waxy hybrid development involves a straightforward gene deletion, it fit well with the CRISPR-Cas approach. “Waxy corn also represents a relatively small volume, identity preserved product, so that also was an ideal fit for this new technology.”

By using CRISPR-Cas to make the deletion in current elite inbreds, the company was able to speed the development by avoiding generations of backcrossing.

“It also allows us to avoid yield drag,” Krishnamurthy adds. “When you use conventional breeding to cross with a lower quality plant, you tend to bring some undesirable genes along as baggage.”

The CRISPR-Cas system can help reduce some of the baggage that comes along with everyday foods, as well. At Pennsylvania State University, researchers used CRISPR to make a small deletion in a gene, interrupting the development of melanin.

It’s melanin that causes white button mushrooms to brown after they have been sliced or bruised. And tomato lovers are anxiously waiting results from CRISPR-Cas efforts to bring missing flavor components to the modern commercial tomato.

Researchers at the Plant Innovation Center at the University of Florida have identified 13 key flavor volatiles and located the position of the genes that make these compounds. Previous research shows CRISPR-Cas to be effective in editing the tomato genome.

Prevent PRRS. Researchers at the University of Missouri used CRISPR-Cas to alter a few letters of the pig genome and came up with a breakthrough—piglets that were resistant to the devastating disease called porcine reproductive and respiratory syndrome (PRRS).

“PRRS needs help from a protein called CD163 in order to spread inside the pig,” says Randall Prather, Curators’ Distinguished Professor at Missouri. “We were able to breed a litter of pigs that do not produce this protein, and when they were exposed to PRRS, did not develop the disease.”

The Missouri researchers, along with Kansas State University scientists and a commercial partner, Genus plc, have published their studies; the concept could have a significant impact on how diseases are addressed in other livestock species.

“One of our goals is to produce animals that don’t have to be vaccinated against disease,” Prather says. “We are going to see CRISPR used to make animals that require less management and are more efficient.” 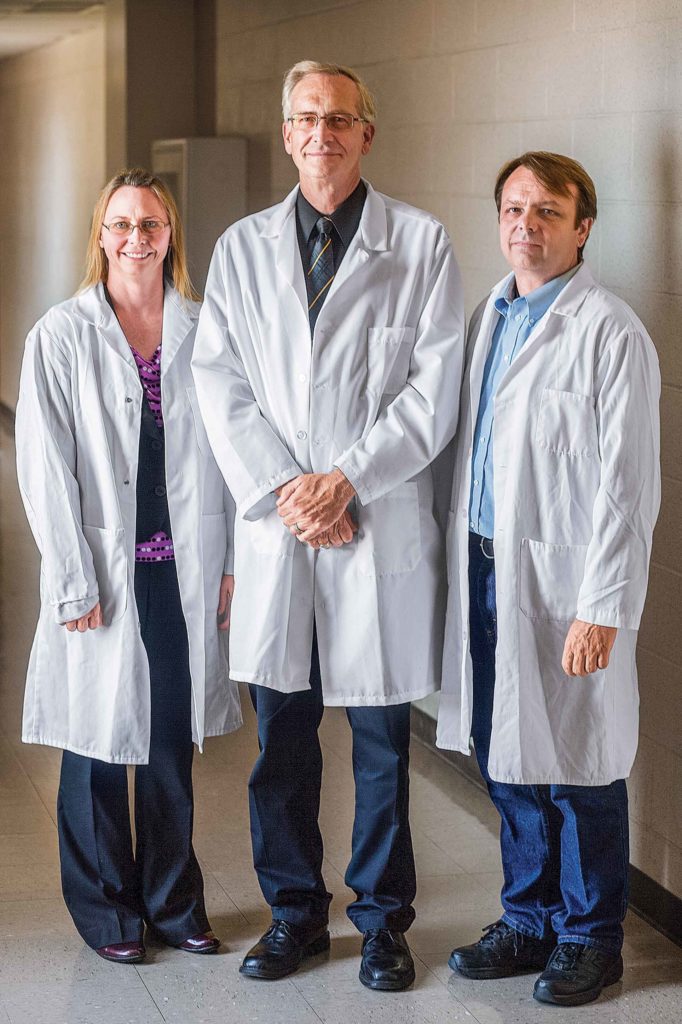 University of Missouri researchers Kristin Whitworth, Randall Prather, and Kevin Wells teamed up to use the CRISPR-Cas system to produce pigs that can resist the PRRS virus.

Regulating change. Just how much impact the CRISPR-Cas system has on agriculture may depend on how it is regulated. Crops are getting a green light; since there are no “outside” genes being brought in, these are not transgenic crops. That’s why the U.S. Department of Agriculture has announced that it will not regulate crops that have been genetically edited. “Genome editing can introduce new plant traits more quickly and precisely, saving years in bringing needed new varieties to farmers,” according
to an agency press release.

It’s a different story for livestock. The U.S. Food and Drug Administration has authority here. This agency’s current stance is that, if even one letter of the genome is changed, the animal will need to go through the same process as a new drug approval—a long and costly effort.

As University of Missouri researcher Prather points out, when scientists use CRISPR to change a letter in the genome, they know exactly where that change is located. “But in any normal fertilization, there typically are between a hundred and two hundred random mutations somewhere in the genome, and we don’t know where those are,” he observes. “I’m not sure I understand the scientific basis for needing to regulate the one intentional genome change, but not regulate the other hundred or more that occur randomly.”

Farmers are joining the effort to explain the benefits of this new technology, hoping to avoid any misunderstanding on the part of consumers. “Responsible gene editing will provide a lot of good options for people, pigs, and the planet,” says Randy Spronk, a Minnesota family farmer raising soybeans, corn, and pigs. “We need to get out in front of the discussion. If those of us in agriculture want to have access to innovation, we need to be very transparent in order to keep our societal license to operate.”

As a member of a discussion panel at CRISPRcon, an annual industry summit, Spronk explained how PRRS was devastating—not just from the standpoint of pig illness and deaths, but stress on farm families and workers in the pig barns.

“This is really a sustainability issue,” he adds. “CRISPR is just another evolutionary step forward in selection that farmers have done for thousands of years.”