Rootworms and corn growers have been locked in an escalating arms race over the past 50 years or so. The sobering fact is that the Diabrotica family of insect pests consistently gain the upper hand, finding ways to foil whatever new pest management technology that farmers put
in their fields.

“Corn rootworms are an incredibly adaptable and challenging pest,” says Iowa State University entomologist Aaron Gassmann. His laboratory studies the western corn rootworm’s evolution of resistance to Bt traits, and looks for ways that agricultural best practices and ecology can team up to manage resistance in the rootworm population.

There’s a new transgenic weapon on the horizon to help fight corn rootworms, and Gassmann points out that managing resistance will be doubly important when it arrives. The rootworm is the first major ag pest targeted for control by use of an RNAi-based trait, which silences critical genes in the rootworm and causes its demise. The technology is registered by the U.S. EPA, and is expected to be in farmers’ hands in a couple of years.

“The new technology looks promising, but managing resistance is the key,” Gassmann says. “It will be important to protect the efficacy of the RNAi trait, but since it will be coming out in a pyramid with a Bt trait, it also is important that corn growers follow management practices that allow current Bt traits to remain effective as well.”

Bt background. By the year 2000, a USDA economic study showed that the corn rootworm pest was a “billion-dollar bug”—costing farmers that amount annually in lost yield and insecticide treatments. But the promise of a magic bullet came along in 2003, with the announcement of transgenic hybrids with a Bt trait for rootworm control.

A soil-borne bacteria called Bacillus thuringiensis is the source of the so-called “Bt” protection. These bacteria contain a crystal protein that has insecticidal properties; once ingested and exposed to the highly alkaline conditions in the gut of an insect, it becomes toxic. The crystal (Cry) toxins vary by the strain of Bt bacteria, and affect different insect orders. Even small amounts of the protein typically can kill susceptible insects. 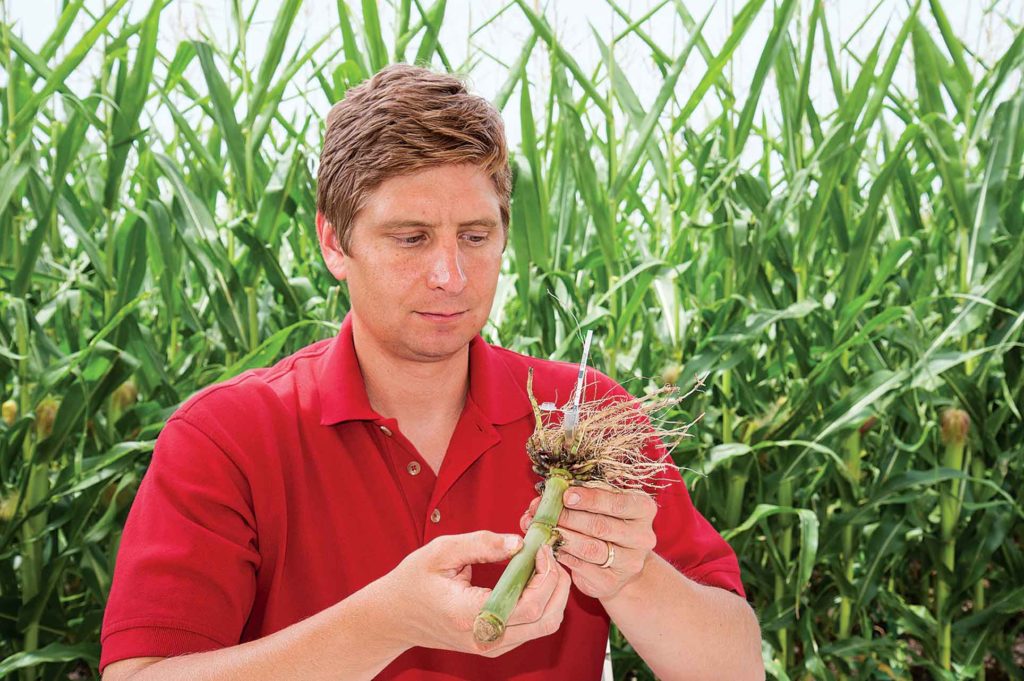 Aaron Gassmann, an Iowa State University entomologist, says farmers can follow management practices that can help prevent corn rootworms from developing resistance to popular Bt traits. Some of those steps involve rotating to non-host crops and considering soil-applied insecticides as an alternative to Bt traits.

The rootworm Bt traits, however, do not deliver as big a toxic dose as the ones that work against European corn borer, for example. That’s one reason scientists were on the lookout for the development of resistance to the rootworm traits. Early laboratory experiments showed that the western corn rootworm could develop resistance after as few as three exposures to the Bt toxin.

Gassmann saw evidence of resistance to the original corn rootworm trait, Cry3Bb1, in 2009; he published his findings in 2011. Further study showed the development of cross-resistance, as well. “Cry3Bb1, mCry3A, and eCry3.1Ab all appear fairly similar to the rootworm,” he says. “Resistance to one is likely to confer resistance to the other two.”

The predator approach. Getting back to basics is the first step in beating the corn rootworm. Rootworm larvae feed nearly exclusively on corn roots, so rotating to a non-host crop devastates the population of this pest. There are parts of the Corn Belt where the rootworm has adapted even to this practice. In some areas, the northern corn rootworm uses an extended diapause to defeat crop rotation; the western corn rootworm “soybean variant” lays its eggs in a nearby soybean crop.

Nonetheless, diversity can play a key part in rootworm control—particularly if that diversity leads to a healthy predator population. That’s according to entomologist Jonathan Lundgren, who heads up restorative agriculture research and outreach at Blue Dasher Farm (on the Web at bluedasher.farm). He points to a study at Dakota Lakes Research Farm, where scientists injected 1,000 rootworm eggs directly into the corn row. These were fields managed by soil-health pioneer Dwayne Beck, using no-till, diverse crop rotations, and cover crops.

Predators made short work of the rootworms. Corn plants showed no damage to root nodes. “We found more than a billion predator insects per acre,” Lundgren points out. “Predators help to create a cornfield where corn rootworms can’t make a living—but the farmer can.”

Agriculture in the aftermath of World War I.