Out of the Darkness

Rural depression is real. And it can kill.

Out of the Darkness

Rural depression is real. And it can kill.

Matt Kelly knew something was wrong, and his family knew it, too. Farming with his in-laws near Watrous, Saskatchewan, a two-hour drive from his wife and young children, was taking a heavy toll. Long, stressful days turned into lonely nights, when Kelly’s thoughts and worries would spin into paralyzing anxiety attacks.

“I was struggling,” Kelly recalls. “I wasn’t eating, I wasn’t sleeping. It was very confusing to tell what was going on. It was hard to remember things—your sense of reality gets distorted, sort of like you’re in a dream. You start to run on raw emotion, start to lash out at everyone and everything.

“You lose the ability to have a normal conversation,” he adds. “Nobody wanted to talk to me. I was like a loaded gun. Anything could set me off.”

Matt Kelly was not alone. In an online survey of Canadian farmers in 2015 and 2016, the University of Guelph’s Andria Jones-Britton found that 45% had high stress, 35% had depression, and 58% had varying levels of anxiety.—rates 2 to 4 times higher those of farmers in the United Kingdom or Norway. In the U.S., the Centers for Disease Control is reanalyzing data from a 2016 study on farmer suicide rates that set off alarm bells across the countryside.

The stress of dealing with unpredictable weather, crops or animals on the farm, coupled with financial worries, physical and social isolation, and an often chronic work/life imbalance can easily crank up into panic or unravel into depression.

Both are a body’s natural reactions to extraordinary stress, and they are both treatable.

Country singer and former ranch hand Jason DeShaw of Plentywood, Montana, says he was relieved when his waves of euphoria and depression were diagnosed as bi-polar disorder in 2010. DeShaw began treatment and became a passionate advocate for mental health issues—which are increasingly being called behavioral health—especially in the rural community, where many cases go untreated.

“Once I got the diagnosis, it was kind of freeing to know there was a name for it,” DeShaw told a crowd in a TEDx talk in Helena, Montana.

DeShaw described the depression that follows his surges of energy.

“Depression, for me, is the great darkness, this black abyss in which happiness and hope seldom exist,” he said. “And it’s every bit as physical as it is mental. I can feel the weight of depression crushing down on me. I can feel it in my bones.

“It’s easy for me to forget that there’s hope when I’m in such pain,” DeShaw added, noting that the pain is even worse than the time that his instinct to “cowboy up” ended him up in the hospital with a burst appendix.

“The brain is just another organ in the body, just like the heart,” DeShaw said. “But if someone has a heart attack, people don’t turn their back on them, or whisper in hushed tones about them being weak. No, they probably bring ‘em flowers. But I ain’t never got a balloon or a casserole with mental illness. Which is OK. But the point I’m trying to make is that we cannot close the door on people because their illness occurs in a different part of their body.”

Even workaday stress or loss can trigger depression. Mike Rosmann, a farmer and psychologist in Harlan, Iowa, says persistent stress can result in high levels of cortisol and reduced production of beneficial hormones like seratonin, norephinephrine, dopamine, and oxitocin.

“We know that after a person has pushed incredibly hard, the body starts to excrete cortisol,” he says. “It slows the heart down, tries to make up for lost sleep, makes you feel logy. In short, we become depressed.”

Chemical depressants can come from outside the body, too. Rosmann points to research that suggests a possible link between depression and insecticides that interfere with neural pathways. And, of course, alcohol and drugs can tip the scales toward depression or amplify depression into suicidal thoughts.

Many successful farmers around the world share a genetic predisposition to tolerating adversity, taking risks, relying on themselves, and hanging in there when the going gets tough, Rosmann adds. They also tend to react to challenges by going into a state of high alarm. Historically, that contributed to great threat awareness and quick reactions. Nowadays, it can lead to the buildup of high levels of stress hormones. 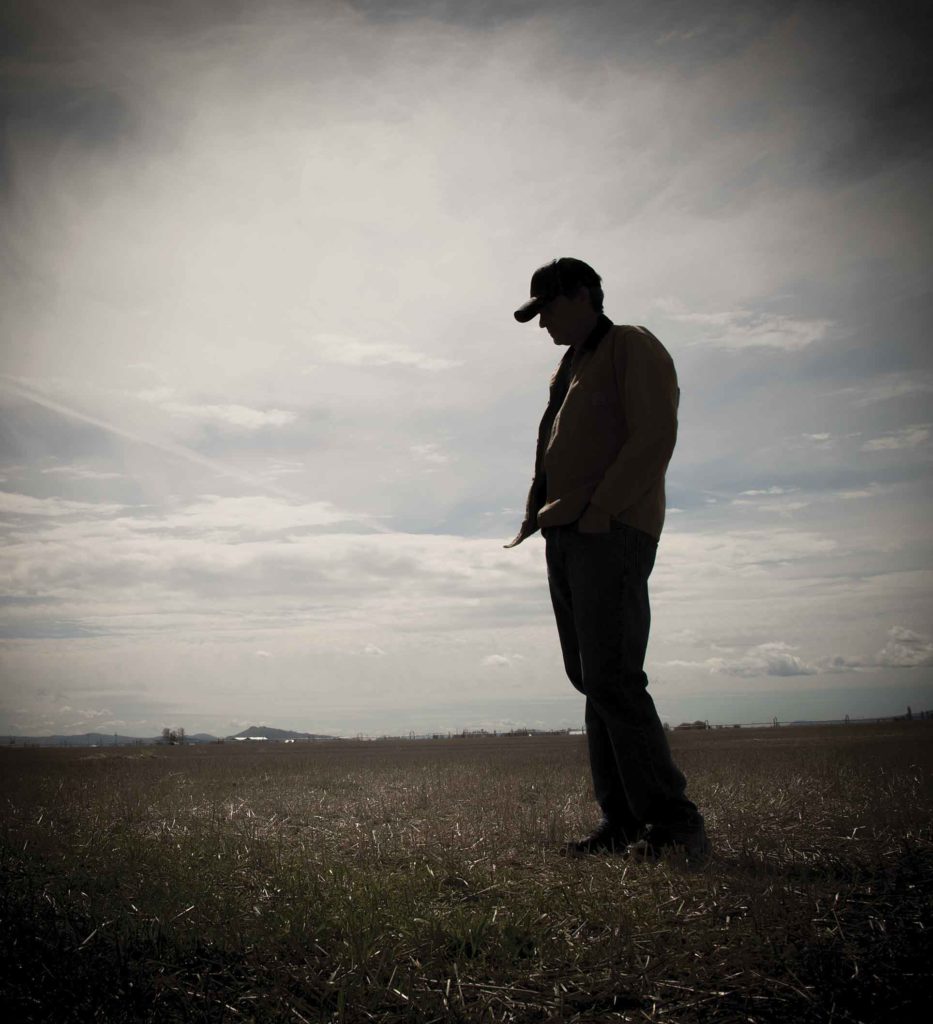 He calls it the “Teutonic gene,” though it applies to people from a wide array of backgrounds. The combination of skills and drive, coupled with deep ties to the land, make for great farmers, but can also lead to higher risk of depression.

“The downside is that they do not reach out for help well, and sometimes keep hanging in there excessively long, or they are not good at changing,” Rosmann explains.

That adds physiological stress and all the hormonal pressure that comes with it, as well as emotional stress that can be equally powerful.

Psychologist Val Farmer of Wildwood, Missouri, notes that many people identify so deeply as farmers that any threat to their ability to farm can have deadly consequences.

“If the core of their identity is pride in being a farmer and their own personal pride in the community, and their goal is to pass on the family farm and maintain their own reputation as an outstanding person and an outstanding farmer, then the idea of failure or defeat is a life-threatening situation,” he points out.

When personal identity, community standing, and physical limitations or business problems get tangled together, it’s vital to seek another perspective to prevent problems on the farm from spiraling toward anxiety, depression, or even suicide.

Bob Fetsch, professor emeritus at Colorado State University, notes that seeking expertise to solve problems is commonplace on the farm—except when it comes to finding help for depression.

“We get professional help when we can’t figure out the computer system in our tractor,” he says. “When my dad and brother have a cow who’s been laboring 12 hours to deliver a calf, they do all they can to assist her to deliver that calf. When they fail, they call a professional: a veterinarian.

“Are you and I not worth more than a mother cow?” Fetsch asks. “When we’ve done all we can, isn’t it time to call a professional?”

It’s no secret that people—especially rural people—resist asking for help. Matt Kelly says his life changed when he took the step of calling a hotline for people in crisis. That’s why he and his wife Lesley have made it their mission to reduce the stigma around behavioral health, sharing their stories and helping create domore.ag, an online resource and advocacy group for the rural community.

“I’ve worked in the ag sector. I’ve worked in the oil sector. I think I’m fairly tough. But this isn’t about being weak or anything,” Kelly says as he talks about stigma. “Sometimes you just need to talk to somebody to get a different perspective.

“You can only lean on your family members so much, and need to reach out to someone who has no skin in the game,” he adds. “I had to ask for help. I didn’t understand what was going on.

“It was common sense,” Kelly recalls. “You could tell they weren’t judging you. Just talking.”

Kelly learned tactics like exercise, journaling, and communication to help reduce his anxiety. He and his in-laws conduct daily check-ins that he says improve safety and employee relations, too.

In Missouri, Farmer points out that connecting with other people, whether they’re friends, loved ones, doctors, clergy, therapists, or bankers, can break the spiral of depression. Feelings of helplessness that could lead to suicidal plans can be replaced by problem-solving instincts.

“Their depression kind of melts away when they’re taking action,” Farmer notes.

Farmer adds that the time to fight depression—no matter how you feel at the moment—starts right now, by strengthening relationships with your spouse and friends, and building an identity, hobbies, and a fuller life beyond the farm.

“Join the choir at church,” he suggests. “Do things on Sunday. Start having a normal lifestyle. If they live their life that way, when there’s a setback, it’s not everything—it’s just one thing, and they know there’s more to life than that single thing.”

Spouses and friends are the first line of defense. It’s important to recognize the symptoms of depression or suicide risk, which can include:

Fetsch emphasizes the importance of really listening to people—respectfully, without judgment.

“If they give you a clue, they’re saying, ‘help me,’” he says. “Don’t deny it and say, ‘don’t do something stupid.’ Listen to their story and, especially if they are suicidal, get them to a family physician, emergency room, or behavioral health therapist.”

Loved ones and friends are especially vital because rural resources are desperately short.

At Minnesota State University, Mankato, professor and past president of the National Association for Rural Mental Health Paul Force-Emery Mackie is pushing to build behavioral health capacity in rural communities nationwide. His vision includes training rural people as social workers, psychiatrists, psychiatric nurses, and peer support specialists. They understand the culture and are likely to stay in the community, he notes, and exposing rural students to behavioral health careers will help reduce the stigma around those services.

In Canada, domore.ag lists crisis hotlines in each province. In the U.S., several states have hotlines—search online, ask your doctor or pastor, or check with your state Extension service. The National Suicide Prevention Lifeline at (800) 273-TALK also provides 24/7 coverage across the country.

Go beyond the printed page with our new podcast from The Furrow and Homestead magazines.

Recognizing the signs of severe depression could help you save a life.