This day in August in the far southwest tip of Arkansas is hot. Inside the small gray barn, it is hotter yet. Unforgivingly sweltering. Six propane furnaces are roaring, and 10 people are putting as much effort as they can into their work, each clanging a heavy hammer on an anvil hundreds of times an hour. Sandwiched between hammer and anvil are their hopes and dreams: a red-hot blade of steel, the beginnings of a knife.

In two weeks, the 10 students are beginning to learn what it takes to be a bladesmith. It’s no easy task. It will take a student years to become a journeyman smith, and even more years to become a mastersmith. Only 120 mastersmiths exist in the world. Odds are that most of the students will never join their ranks.

Amidst the black dust from metal shavings and grindings—it covers everything, floor, workbenches, tools—a young man from Israel, Yaniv Shiff, approaches instructor Greg Neely with a question about his knife. Neely takes the blade and shaves hairs from his arm. “It’s shaving, but it’s not popping,” says Neely. “I like that hair to jump off my arm.” But Neely gives the student an excuse. “That sharpening stone in the shop is all clogged, so I don’t think you can get a good edge from that.”

Bladesmithing is a hot hobby these days—literally and figuratively—and that’s why this school is so popular. Its classes are always full and it has a waiting list of people wanting to attend. Established in 1988, The Bill Moran School of Bladesmithing is the world’s first school of its kind. A few other bladesmithing schools have since started, but this place is special because of its history. In the small town of Washington, Arkansas, this is where, in the early 1830s, silversmith James Black forged a knife for Jim Bowie. The knife became a legend. 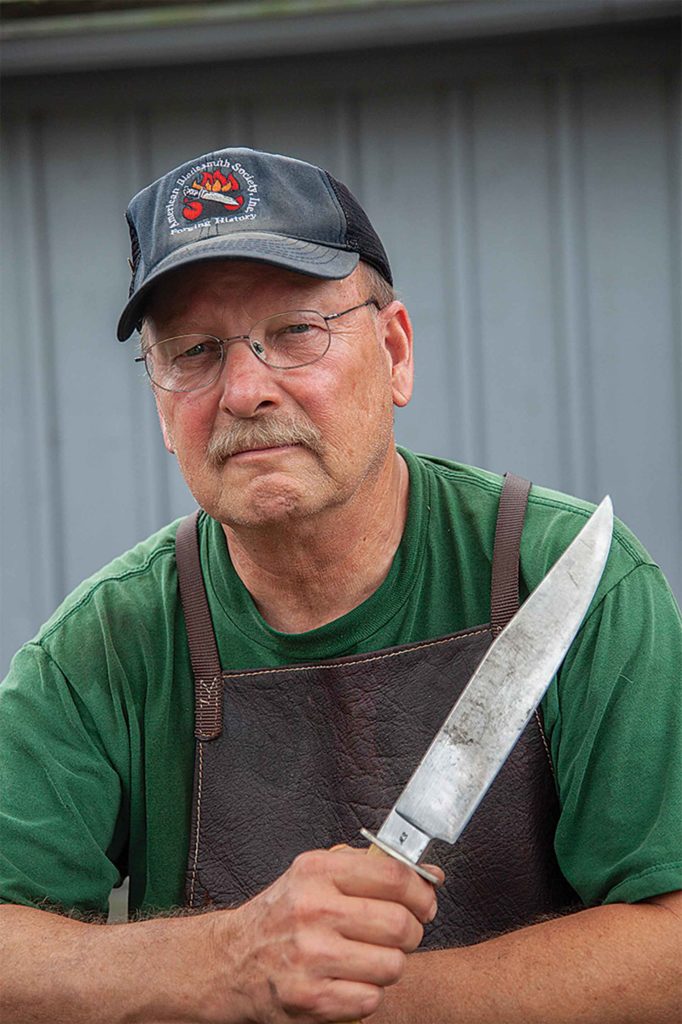 Master bladesmith Greg Neely has taught at the bladesmithing school many times.

The famous Bowie knife. When Bowie passed through Washington the town was a bustling gateway to the Southwest. Spain had just left the territory and Americans were rushing in to find their fortunes. Today, Washington is a quiet little town with a population of 170.

No one really knows what the original Bowie knife looked like, just that it had a long blade. Fame would prompt many to produce and sell a “Bowie knife,” something that became such a fearsome weapon that many communities outlawed it.

Neely, a retired homicide detective from Texas and a mastersmith, and journeyman Don McIntosh are teaching the class, which quickly learns how challenging—both mentally and physically—the skill is. Allesandro Toffoli, from Italy, restores antiques and is an “art taxidermist.” He wants to make knives to add to his shop. Over the years, students have come from all over—France, England, Belgium, Brazil, Australia.

Neely began making knives in 1986, got hooked, and came to the school in Washington the first year it started. “It’s a real eye-opener especially if you’re used to factory knives,” he says of the art. “There’s a huge difference. These knives are real performers. They’re strong and they stay sharp.”

To become a journeyman—one level below master bladesmith—the American Bladesmith Society has what seems like an impossible test. A blade must, in order, sever an inch-thick hanging piece of Manila rope with one swipe. Then it must cut through a 2 by 4 piece of lumber—twice. Without any honing following those tests, it then must shave the hair off an arm. But the test isn’t done until the blade is put in a vise and bent 90 degrees—without breaking. 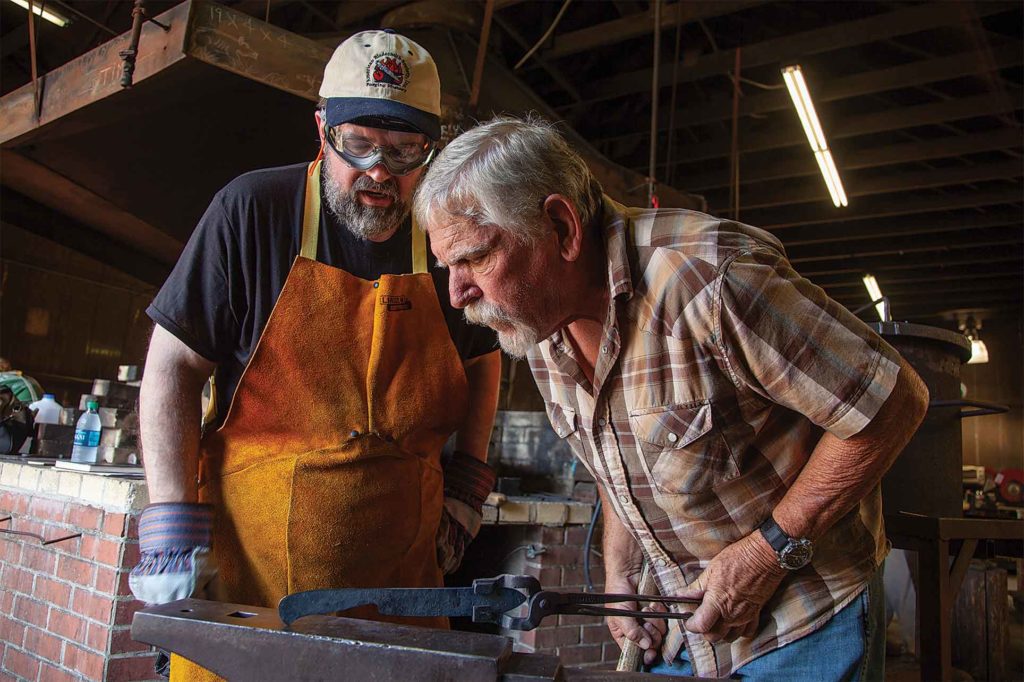 Artistic skills. If a bladesmith passes that test, a panel of seven mastersmiths judge a collection of the bladesmith’s knives and evaluate their design, balance, fit, and finish. Creating a blade that will pass the cutting test is imposing enough. Making the knife handle, whether it be of fossil ivory, birds-eye black walnut, or another exotic wood, is another skill altogether. Many bladesmiths have spent restless nights before having their knives go through the judging. If a bladesmith fails three times, he’s disqualified forever.

But that’s just the test to become a journeyman. “Yes, I’m just a journeyman,” says McIntosh laughing. “I’ve been a journeyman for a long time. I’ll probably take the mastersmith’s test next year.” He admits he’s apprehensive.

To become a master bladesmith, a journeyman must go through the same test, but he’ll have to make Damascus blades. Damascus steel was first discovered by the western world when Crusaders invaded the Middle East in 1096 and encountered sword blades that were incredibly sharp, durable, and very pliable, almost like the plastics of today. And, they were beautiful. The blades had swirling patterns on the steel, made by laminating different types of steel and forging them together. The technique for making such blades was lost for hundreds of years and only rediscovered a few decades ago.

To pass the American Bladesmith Society’s test, the Damascus blades must contain at least 300 layers of steel. A bladesmith might take four layers of steel, sandwich them together and forge weld that. Then he’ll bend the metal over, forge weld again and have eight layers. Another time 16, then 32 and so on.
In forge welding—leaving the metal in a furnace before hammering—the metals’ molecules are jumping around and bonding with each to form one strong piece of metal.

The students at the school won’t even approach making Damascus blades, nor will they make handles. Their goal is just to make a Jim Bowie-style blade that will perform well. The student from Israel passed his test—he cut the rope, chopped the wood, and bent the blade to 90 degrees. Other students watched in awe. 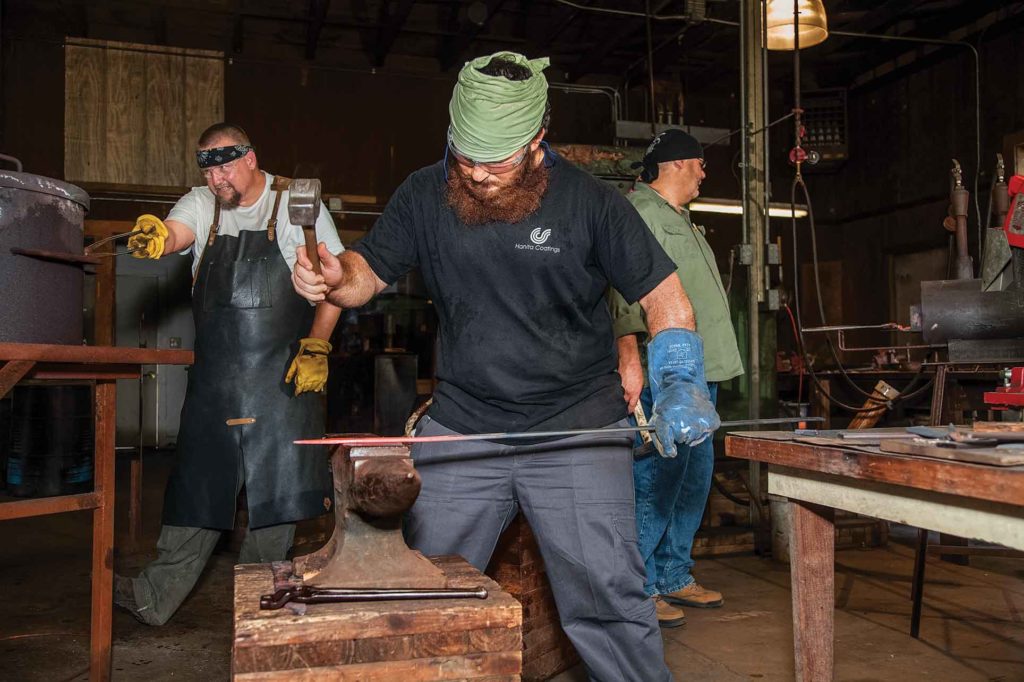 aniv Shiff came from Israel to learn bladesmithing from one of the few bladesmithing schools in the world. Behind him, William Stucker checks his blade after firing.

Tests that fail. “In every class you’re going to have a knife that gets down to about 45 degrees,” says McIntosh. He makes a popping sound with is mouth. “It breaks. Go make another one.”

Master bladesmiths can talk for hours about the various elements that can go into metals they work with—manganese, tungsten, nickel, and others. They give the steels different hardening characteristics. Chromium, the element in  stainless steel, is what’s in virtually all kitchen knives. But it’s not really stainless—more like “stain resistant,” says Neely. “They’re pretty easy to break because the chromium makes them brittle. We don’t forge that stuff.

“Factories don’t have time to have some guy back there hand forging,” he adds. A bladesmith makes knives, but don’t just call him a “knife maker.” There is much more to the skill of working these metals.

Why various steels react the way they do remains a bit of a mystery, but there is always carbon. “Add carbon to iron and you get steel,” says Neely. “It depends on how much carbon you’ve added into that matrix as to just how hard you can make that steel.” Master bladesmiths from thousands of years ago didn’t have electron microscopes to analyze their steels—they discovered what was good by trial and error.

“It’s an old, old craft,” says Neely. “With the carbon steels, you’re doing things that had been done for thousands of years, and aside from the satisfaction of making something like that and being able to hold it in your hand, there is a certain degree of romance in it.” 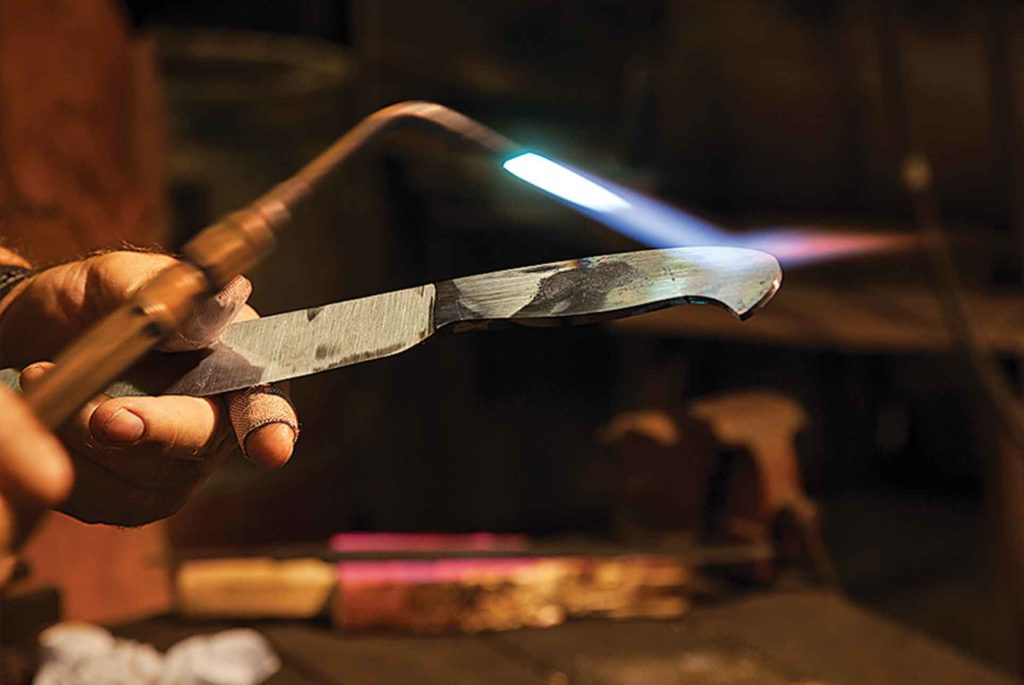 The hot fire of a torch tempers a knife in progress.

Like every other bladesmith, Neely has an appreciation for a skill that has such rich history. “For thousands of years, knives and swords in particular were a big deal,” he says. “The sword was a rich man’s weapon. It was not something that every Tom, Dick, and Harry had, and a lot of people highly revered them in Medieval times. All the knights had swords.

When the students are finished hardening their blades, they have a piece of metal so hard that it could break if dropped on the concrete floor, so the blades must be tempered. First the entire blade is exposed to a low temperature to draw the brittleness to a working level. Then the blade is tempered by zone. Neely sits at a bench and demonstrates, holding a knife’s cutting edge immersed in water while he takes an acetylene torch and heats the knife’s spine and tang. This softens those parts of the knife so the blade has some flexibility.  The cutting edge remains hard as ever.

Students gather around to watch, take notes, and shoot videos of the process. One is Robert Schneider of Kansas City. This is the first knife he’s made, and he’s captivated. “It’s a lot of fun honestly. I do jewelry, but this is totally an art form. But it’s a useful art form. It’s something you use and hand down and pass on for generations.”

Schneider admits banging hammer against anvil will wear a person out. “I went down to Walmart the other night and bought all the cold packs they had.”

With students coming from across the world to learn bladesmithing, speaking and understanding English can sometimes be a problem. At times something gets lost in translation.

Lighter moments. McIntosh recalls the time when he gave students an introduction to the area.  Knowing some would want a beer after a long, hot day in the metal shop, he told them they couldn’t. Washington is in a dry county.

The next day, he noticed several cases of bottled water outside the door of a young man from Japan. Macintosh pointed to the water, and the young man simply nodded, smiled, and replied, “Dry county.”

McIntosh laughs and says, “I guess he wanted to make sure he didn’t get thirsty.”

"Our youth are now seeing the value of our tradition in livestock."