Farmers’ continual quest to be more productive, more efficient, and more sustainable is having an interesting impact on the seedbeds into which they plant. They’re changing color. In contrast to conventionally-tilled black and no-till’s residue covered brown, many growers in today’s cover crop era are opting to plant into the lush green of a growing cover crop—a new practice tabbed as ‘planting green’.

“It’s a unique approach,” says Clay Center, Kansas, farmer Josh Lloyd. “We’ve been no-till farmers since 1997 because we quickly grasped its advantages, but cover cropping and planting green took a little longer for us to get over the mental hurdle of what a seedbed should look like. Now, I can’t imagine not planting green.”

Lloyd plants corn and soybeans into a cover crop of cereal rye that often reaches a height of three feet or more. “We spray the rye with glyphosate within a day or two of planting, depending on the weather. We’re still using a residual herbicide with that application, but  may be able to eliminate it on some fields because of the weed control from planting green,” says Lloyd. “In addition, we like planting green because it gives the cover crop longer to have its impact on soil health by feeding microorganisms in the soil, it results in more biomass, water infiltration is improved, and it helps to dry soils in the spring when they’re often too wet for optimum planting,” he adds

Weed control savings. Lloyd explains that the cost of a cereal rye cover crop is similar to the herbicides he previously used for weed control. “To control tough weeds like marestail we were applying a burndown  and a residual in the fall at a total cost of roughly $15 per acre. We repeated that in the spring for another $15. In contrast, cover crop seed costs $12 per acre and we figure $20 for seeding, so the total cost is similar. However, planting green gives us all those other benefits.” 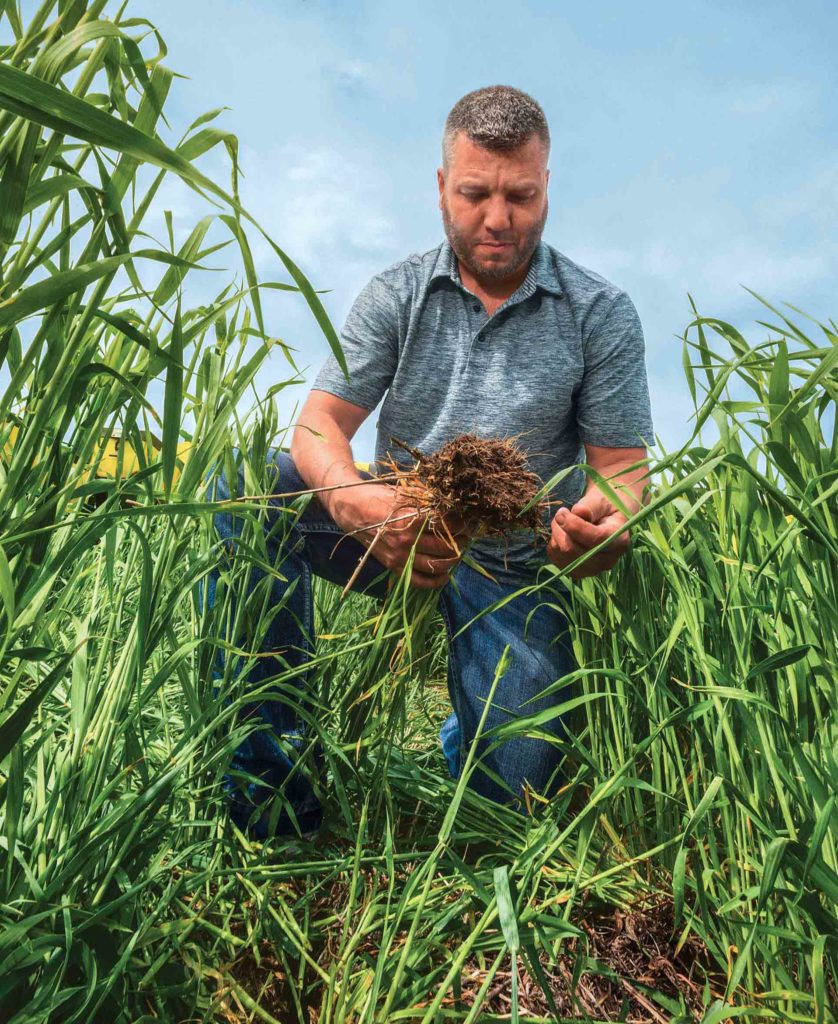 Kansas farmer Josh Lloyd is convinced of the benefits of cover cropping. Waiting to terminate the rye he uses until after corn and soybeans are planted enhances those benefits, aids weed control and improves planting conditions.

Kansas State University weed scientist Anita Dille has worked with Lloyd and other farmers in on-farm research investigating the timing of cover crop termination impacts weed control. “We compared killing the cover crop a week before planting, the day of planting and a week after planting. The first of those would be a traditional approach for farmers using cover crops and the other two would be ‘planting green’,” says Dille.

Researchers applied no residual herbicide to the plots and weed counts taken later in the growing season found 16, 6 and 0 weeds per square yard respectively.

“Delaying termination allowed the cover crop to develop more biomass which kept more residue on the soil to prevent weed germination. We believe growers still need to use a residual herbicide in the spring, but planting green can be a good tool in an integrated management system,” says Dille.

It’s catching on. From 2012 through 2017 the Sustainable Ag Research and Education (SARE) program,  Conservation Technology Information Center and the American Seed Trade Association conducted a national cover crop survey and the results track the growing popularity of planting green. “In 2012 there was no mention of planting green, but in 2017 nearly 40% of the 2000 farmers surveyed were using it,” says Rob Myers, North Central regional director for SARE.

Planting into a 3- to 5-foot-tall crop of rye may look like a daunting task, but survey results show less than 10% of the users had given up on the idea. Meanwhile, more than half said planting green either made management simpler or the benefits of it were worth the added challenge.

The later of those is certainly true, according to Lloyd. “We don’t farm in a high rainfall area, but our soils are often wet at planting time. The crop and cover crop residue we want to protect the soil and feed soil biology can add to this problem in a wet year, but having the cover crop still alive and growing really improves conditions. There’s no sidewall compaction of the seed slot because the cover crop quickly removes excess moisture and there’s no hairpinning of crop residue because coulters slice right through green residue instead pinching it. It literally plants like a garden,” he says.

Need it? Build it!

Three farm families partner in multiple businesses to expand horizons for all.