In Queen Creek, Arizona, everything about Sossaman Farms and Hayden Flour Mills is deeply rooted in the local farming community—from the very name of the mill to the desert-adapted heritage grain varieties Steve Sossaman grows to supply it.

When he decided to create a mill focused on ancient grains, Jeff Zimmerman chose to resur-rect the Hayden Flour Mills brand, which took its name from a mill established nearby in 1874. And Steve Sossaman’s farm turns the century mark this year, five generations after his family homesteaded the desert that is now in the shadow of the sprawling Phoenix metro area.

Many of the grains Zimmerman and Sossaman collaborate on, from seed to flour sack, go back even farther. There’s Father Kino wheat, carried from Mexico 300 years ago by the Spanish missionary to develop farms in Arizona. There’s Rouge de Bordeaux wheat, which sustained Napoleon’s army as it marched across Europe, and Red Fife, a wheat first planted on the Canadian prairies in 1860.

Then there are the ancient farro and einkorn precursors to wheat, some of which got their start on Mesopotamian farms thousands of years ago. 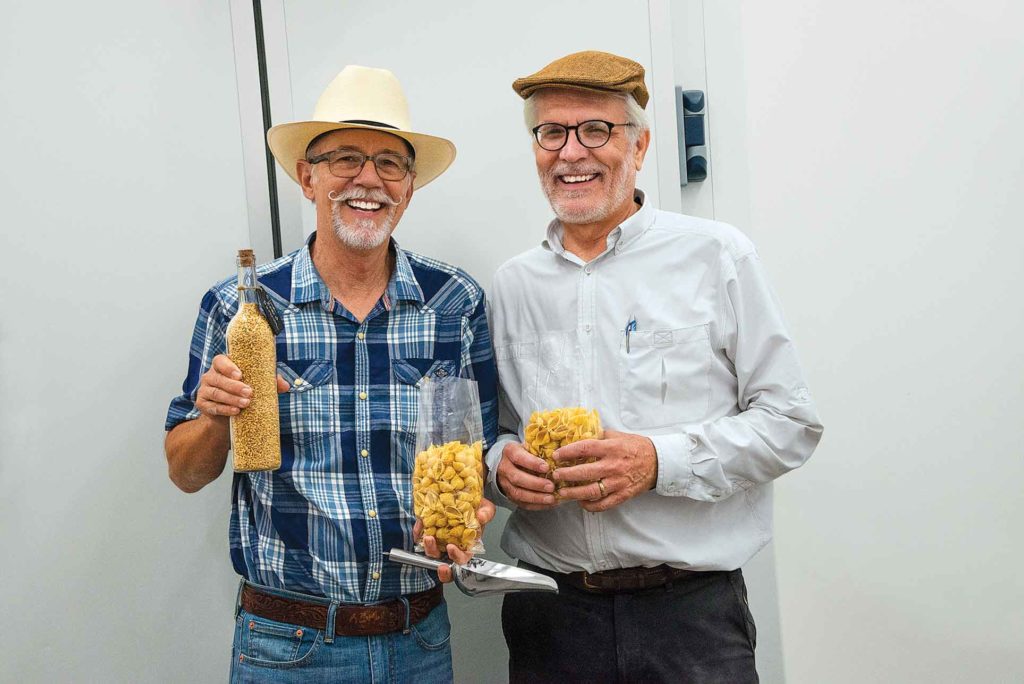 Steve Sossaman (left) and Jeff Zimmerman (right) team up to produce and process a wide range of grains, many of them quite ancient.

A bold idea. Six years ago, Zimmerman approached Sossaman with a bold idea. Zimmerman grew up on a North Dakota farm, and after a career in the tech industry, settled in Arizona and decided to go full circle and apply his creativity to wheat.

His idea was to build a flour mill that specialized in special, old varieties, the kind of grains that have unique qualities, high nutrition, and appeal to artisan chefs and foodies in search of food with flavor and a great story. In short, he wanted to commercialize the kind of grain big mills don’t handle.

Zimmerman points out that the entire annual production of Hayden Flour Mills—1.2 to 1.4 million pounds—is a day’s worth of work at a commercial mill owned by one of the big three U.S. flour companies. His plan was to mill grains the large guys can’t afford to process.

“To prime the pump at a large-scale mill, you can’t mill these 5 acres of Rouge de Bordeaux that Steve has farmed for us. You can’t even fill the conveyors that go to the top of the mill.”

Sossaman was sold. He was excited. He dedicated a corner of his farm to house Zimmerman’s mill, and he started dreaming of grains that would inspire food lovers and let bakers experiment with all sorts of old tricks, like long fermentation.

“We’re going to introduce flour that no one’s had for years and years,” Sossaman says. “Chefs go crazy for this stuff.”

Milling is all about fractions of millimeters, of grinding off 3 or 4 thin outer layers to get at the germ and starchy food supply of the seed. Everything impacts success, from the speed of the mill to the moisture in the air. Learning to mill grains that predate modern machinery by hundreds or thousands of years requires a steep learning curve. 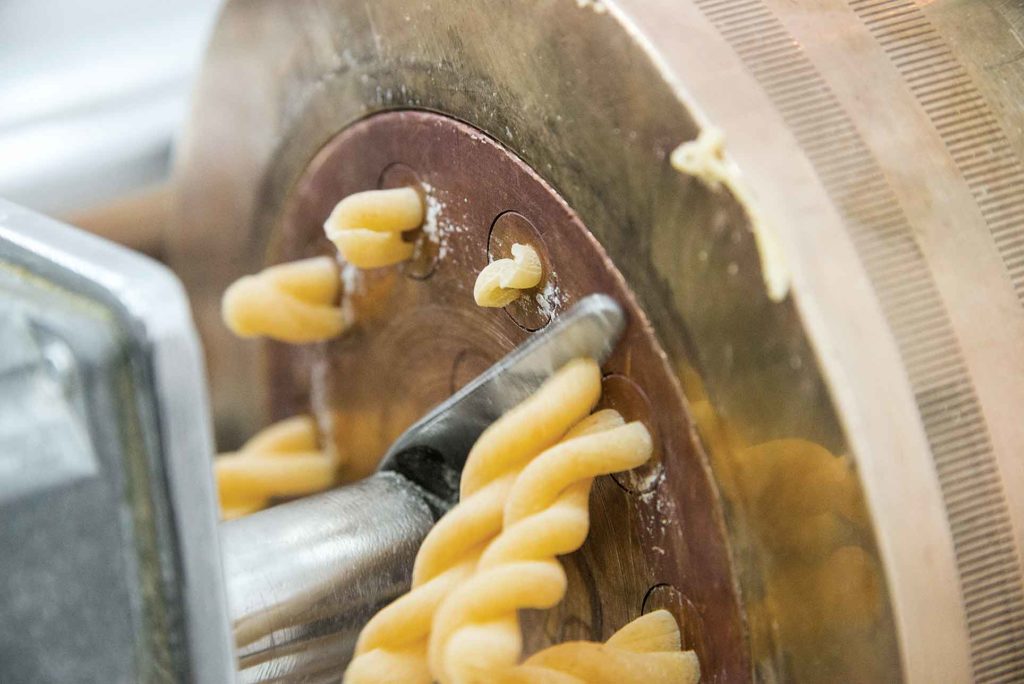 “The first samples I did were in a KitchenAid, in the mill that fits on the front,” Zimmerman says.

Mastering the techniques of milling one variety at a time, he and his daughter Emma scaled up to a 3-foot-wide Partisani stone mill from Italy that can handle 1,000 pounds an hour.

The result is a compact processing line with a touch of modern art—all cones and bent legs and cylinders in shades of bright white and lemon yellow. The millstones spin at waist height in their steel housing, and the room hums with work. A few steps away, Zimmerman has his test kitchen, complete with restaurant-scale mixer, bakery tools, and a pasta extruder that allow him, Emma, and visiting chefs to put various flours through their paces in breads, pastries, and pastas. The experimentation continues every day.

Diversifying the farm. Sossaman was off and running with experiments of his own. The chance to grow drought-resistant crops were a boon as far as he was concerned, a great way to diversify his 800-acre operation from the local standards of alfalfa, vegetables, potatoes, cotton, corn, and conventional wheat, and a nice hedge against dry summers and limited water. Exotic as they sound, Mesopotamian grains—from the area now known as Iraq—are a great fit for southern Arizona, which offers the closest thing in North America to an Middle Eastern summer.

“They have extremely deep root systems and very tall grass,” Sossaman explains. Tall above-ground growth corresponds to deep growth below the ground, he adds—the ancient Middle Eastern varieties can send roots 12 feet down into the soil, compared to modern dwarf wheat, which roots 3 to 4 feet deep.

The downside is that farming old varieties is a constant battle against lodging—fought with manure and minimal irrigation—and a desperate bid for production. Ancient grains on Sossaman’s farm yield about 2,200 to 2,400 pounds per acre on average, compared to modern varieties’ yields of 5,000 to 6,000 pounds.

Millennial targets. In addition to running the farm’s grain-cleaning line, Sossaman’s son-in-law Travis Tolmachoff explores promising new old varieties, that could fit the farm’s marketing plan, and connects with farmers that could be sources of bags of seed or tons of grain. 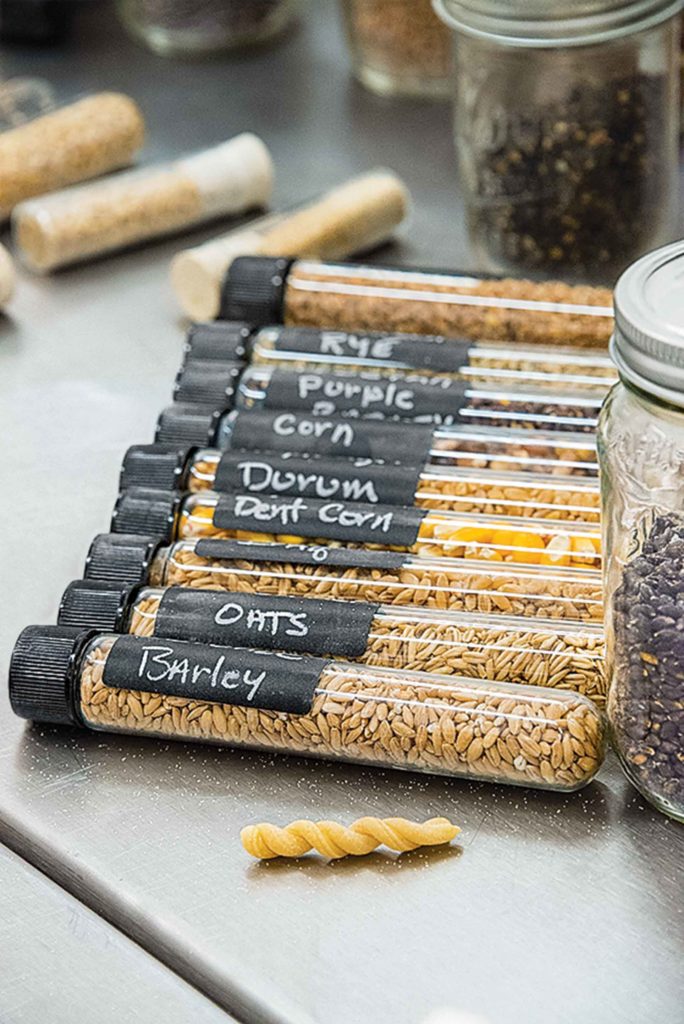 “I’m not the target audience—I’m over 60,” says Sossaman. “Travis speaks the language of restaurants and chefs. He can go into breweries and malters. The target audience is millennials. I ask Travis, ‘what do you think?’ If he’s thumbs-up, I’m in.”

Tolmachoff admits that it can be tough to source good seed of rare  varieties, some of which is only available by the handful.

“‘Let’s talk to this guy—I heard he has some of this seed,’” Tolmachoff  laughs, recounting countless conversations. “It’s just a wild goose chase most of the time.”

When Sossaman Farms does hit the mother lode on a good variety, they save some of the harvest for seed and make sure to share some with other farmers, too.

“We are not a seed hoarder,” says Sossaman. “This is open-source. We want everybody to try this.”

Beginning, middle, and end. The grain cleaning operation at Sossaman Farms is state-of-the-art, with sifters, shaking gravity tables, and even a color sorter that shoots a burst of air to knock off-spec kernels out of a stream of grain. At the end of the line is a controlled-atmosphere packaging system that removes air and pumps in carbon dioxide. That allows the farm to kill insects without pesticides, keep grain fresh, and store seed for years if necessary, extending variety rotations.

Like Hayden Flour Mills across the yard, the Sossaman operation is built for visitors—there’s a big hall for events, a catering kitchen, and windows into the grain cleaning room.

“We want the experience of people coming in to see and do, and have the experience, and know what’s going on,” explains Sossaman.

It’s not just guests who get to see something special at the farm and mill.

“As a farmer, you grow something and it leaves your farm and you never see it,” Sossaman notes. “Now I see the beginning, the middle, and the end, and I see people’s faces when they’re eating it or drinking a beer that has our grain in it.”