Sheep blanket the landscape like corduroy, the sketches of thousands of hooves running up and down the rugged hills. Today, crossing the eastern part of the Republic of Georgia on their way to winter pasture, the flocks pass under high-tension electrical lines and over paved highways. In ancient times, bands like these met caravans following Silk Road trade routes that linked China with Europe.

In those days, Georgia was a restful refuge between Europe and Asia. In many senses, it still is.

Georgia’s wine scene draws a straight line from clay fermenters called qvevri buried in Stone Age villages to modern wineries that still age their wines underground. Georgia is pivoting from its historic role supplying wine, fruit, and cheese to Russia to actively engaging markets in the European Union, North America, and the Middle East. Proximity to hotspots like Ukraine, Turkey, Iran, and Iraq make it a strategic ally of the West, even as Russian invasions in 1992 and 2008 subdue NATO prospects. And its agriculture is a remarkable mix of subsistence backyard farms and ambitious, modern operations.

Georgian agriculture is the very picture of diversity, covering 22 climactic zones from sea level at the Black Sea to alpine fields on the slopes of the Caucasus Mountains. Georgians produce dozens of commodities—from tea to tangerines, hazelnuts, stone fruit, and new crops like kiwis—in fields and courtyards. But perhaps no product encapsulates the breadth of Georgia’s agriculture like cheese.

A few unproductive cows. Cheese is everywhere in Georgia. It’s even at the heart of the country’s signature dish, khachapuri, cheese-stuffed bread. Each region of the country has its own styles and favorites, and every market features homemade cheese. 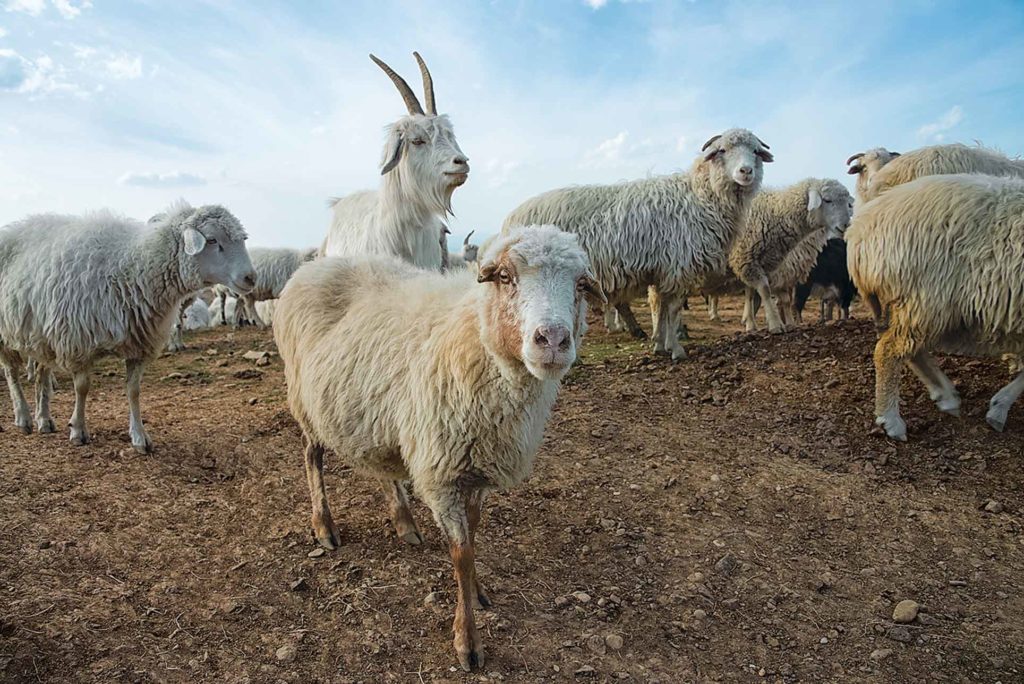 Tushetian sheep on the trail.

After the fall of the Soviet Union in late 1991, Georgia—like most of the other former Soviet republics—underwent a tough logistical and mental transition.

“State-owned farms and collectives disappeared,” Gamkrelidze says. “The land remained state-owned, but was not given back to the people working the land. They ended up with 2 or 3 cows apiece. They were never in charge of a business, never looked at farming as a means to support themselves.”

A few unproductive cows on an average lot of 3 acres aren’t enough to make a living on, but they raised a little cash for rural families during tough times. Some commercial cheese making survived, and Sante was launched in 1997 in a former state-owned cheese plant in the capital city of Tbilisi. The effort was backed by Seattle sports promoter Bob Walsh, who took great interest in Georgia in the ’90s.

“From 2006 to 2013, Russia was closed from the Georgian agriculture market,” explains Nodar Kereselidze, first deputy minister of Georgia’s agriculture ministry. “Initially, this was a shock for the industry, but in the long run, it played a huge positive impact. Everyone started to think of quality, improve export markets, to improve overall business. Now we are exporting to more than 50 countries, versus, then, 10 countries but 99% was the Russian market.”

The collapse of exports Russia shuttered most cheese plants, and people began making their own cheese at home. Sante’s Gamkrelidze says 95% of Georgia’s cheese is still homemade. Charming as that sounds, it means much of the cheese consumed in-country is part of an underground economy, unsupervised and unhindered by the costs of maintaining proper hygiene. Dairy Georgia, which is comprised of six large dairy processors and about 15 small, regional ones, has embarked on an information campaign urging consumers to buy branded, commercially made cheese to help ensure food safety.

Supporting professional cheese makers has ripple effects in the small but growing commercial dairy farming sector. Sante is eager to replace imported milk with more Georgian product, even though the government sets local milk prices 25% above imports. But the company also wants to improve the efficiency of its milk collection and reduce dramatic seasonal supply swings by nurturing large farms—operations with 400 cows or more that can produce upwards of 10 metric tons (22 cwt) per day using the latest genetics and practices from Europe and Israel. 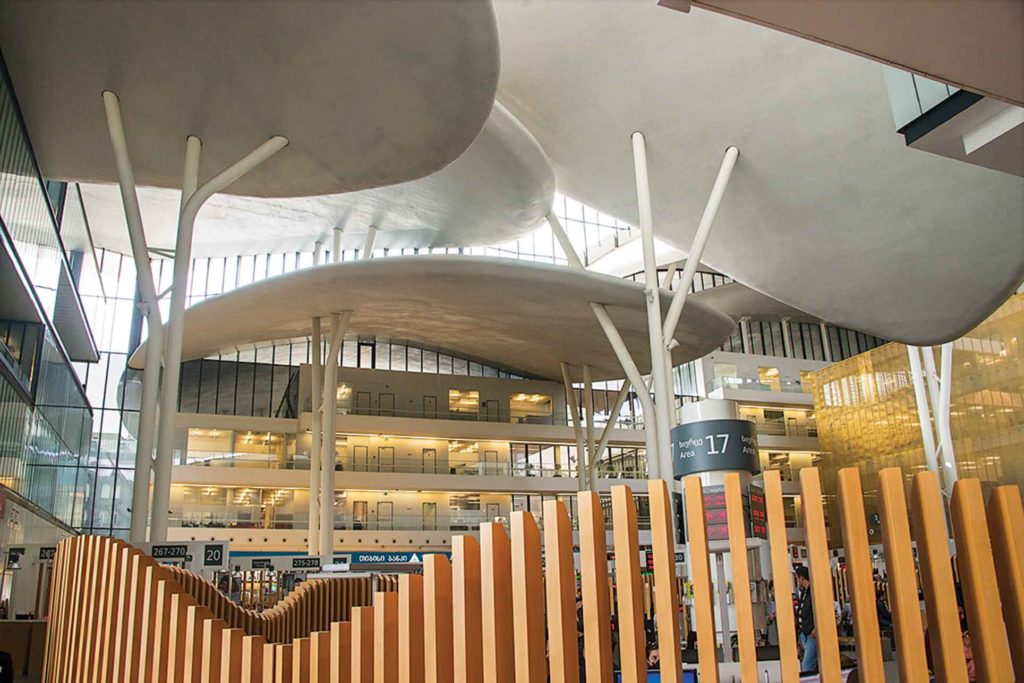 The Public Service Hall in Georgia’s capital is a symbol of the government’s commitment to efficiency and transparency.

There are only a few in the country so far, but Sante is encouraging entrepreneurs to build more. Part of the effort is to help make local lenders more comfortable with agriculture. “There are firms like Sante that have huge deficits of milk willing to stand before the banks and say, ‘we are here to buy all their milk, and here is the contract,’” Gamkrelidze points out.

A key role. Meanwhile, small cheese makers like Gocha Gagashvili and his sister Tamriko at Tsivis Kveli in the village of Kurdgelauri are thriving, too. The Gagashvilis produce 220 to 440 pounds of artful cheese per day—fresh, aged, smoked, studded, stuffed, soaked in wine or honey, woven like wheat straw or formed into filled pouches and tied shut with strings of cheese—in a newly built plant with a HACCP plan and sanitary procedures that meet strict European Union health standards.

Tsivis Kveli cheeses are staples in many restaurants and in the upscale Carrefour supermarket in Tbilisi. Gocha Gagashvili even sent a few shipments to Brooklyn restaurants whose customers grew up in the Soviet Union and still crave Georgian cheese. Though shipping costs to the U.S. turned out to be prohibitive, Gagashvili is bullish on exporting cheese to Europe.

Exports will require two key factors: alignment of Georgia’s food regulations with those of the European Union (EU) and the development of a reliable milk supply. The government has embarked on a campaign to bring 272 regulations into alignment with the EU by 2027. And Gagashvili is cultivating his suppliers.

In exchange for machinery funds from the Market Opportunities for Livelihood Improvement (MOLI) program sponsored by the Swiss government, Gagashvili pledged to purchase milk from small farmers. As he picks up milk, he coaches the producers on improving milk quality, a key role in a nation with just a handful of extension agents and veterinarians.

Though most of Georgia’s cows are local Caucasian breeds—hardy but unproductive—there is growing interest in improved bovine genetics.

Rati Rostomashvili spent 4 years on a German dairy farm learning the trade from friends of his parents. Those friends helped him buy a cow, then another and another, and learn how to make Swiss-style cheese. But each of his local cows was only producing about 5 liters (1.3 gallons) per day—about one-fifth of what a well-bred, well-fed Holstein can produce. 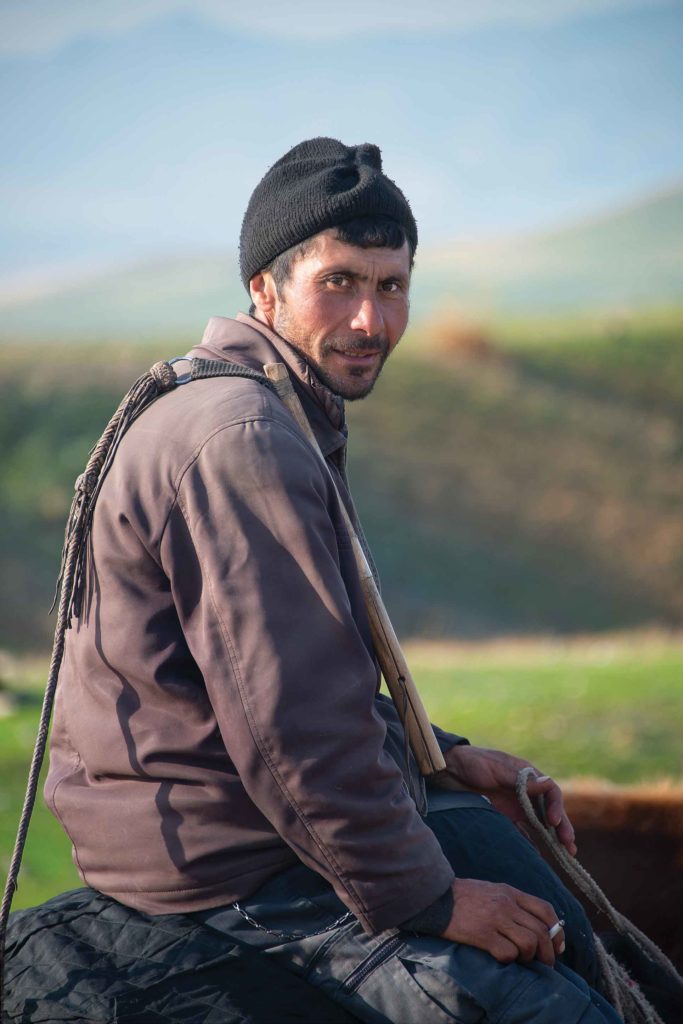 A herdsman hailing from Azerbaijan stops on the 5-day trek to winter pasture with a band of sheep.

Rostomashvili began upgrading his herd, first with Caucasian cows bred to Brown Swiss bulls, and ultimately with Red Holsteins imported from Estonia and Sweden. A zero-percent government loan saved him from commercial interest rates of 12% to 15%, allowing Rostomashvili to build his herd to 40 head and replace his 2-stall shed with a 6-stall herringbone.

From peasant to investor. Over the past few years, agriculture has attracted leading entrepreneurs, even those from the city.

Nino Zambakhidze came back from study in the U.S. to jobs in auditing and translation, but soon got involved in ventures ranging from exporting metals to importing coffee. When her business partner, Beso Babunashvili, bought two cows in 2008, Zambakhidze moved to a remote village to tend them.

At that time, she notes, farming had a bad name. In fact, commercial farming really didn’t have a name at all.

“We were called ‘peasants,’ ” she recalls—glekhi in Georgian. “We destroyed the stereotype, increased their attitude. The peasant comes from ancient history, that you were hired by somebody. In our case, you have your own land and you are hiring somebody and you produce something.”

Around Georgia, the word glekhi—rural people subsisting on the milk of their cows, the wine they crush, and the produce in their richly planted yards—is being joined by phermere, a new term for farmer/entrepreneur. That certainly describes Zambakhidze.

After reading about a child sick from bad cheese, her mother asked her to find a safe source of dairy products. Zambakhidze went to Turkey to learn cheesemaking, secured a $125,000 Millennium Challenge Grant to build a cheese plant, and got into the cheese business. When their cows went dry, she and Babunashvili built a feed mill to boost production, a bold move in a market where mixed feed rations are only just starting to catch on in the countryside.

Today, Zambakhidze and Babunashvili milk 100 cows, tend 173 acres of cropland and 740 acres of pasture—a huge spread by Georgian standards—farm 12 acres of apples, and own an aquaculture operation.

In 2012, Zambakhidze established the Georgian Farmers Association (GFA), which boasts about 4,000 members, including representatives from every municipality in the country. The group promotes entrepreneurship and advocates for farmers. GFA even launched the Agronavti smartphone app—funded by the U.S. Agency for International Development (USAID)—that helps 2,500 subscribers sell crops, purchase inputs online, and keep apprised of prices, weather, and research on agronomic practices.

A new road. Meanwhile, the Ministry of Agriculture is actively promoting agricultural development, notes deputy minister Kereselidze. One program helps farmers replace unmarketable, Soviet-era fruit varieties. Another encourages growers to plant blueberries that can fit into a market gap between Spanish and Polish fruit. And the ministry is helping farmers establish co-ops to process backyard-grown hazelnuts in a bid to someday compete with Georgia’s neighbor, Turkey, the world’s dominant supplier.

And Kereselidze is looking to a new Silk Road—China’s One Belt, One Road project, which is likely to use the Georgian port of Anaklia to once again link China to the Black Sea—as a vital connection. “By this road, new technologies could come in,” he points out.

Traders along that new road are sure to find a restful place, delightful food, and warm hospitality in Georgia, just as they have for millennia. ‡