A “noble transformation” is taking place in Marin County.

The phrase “sea change” traces its roots all the way back to 1610, when William Shakespeare used it in his play, The Tempest. In today’s world, these words are used to describe a “noble transformation” following a radical change of attitude.

Farmers in Marin County, located just across the Golden Gate strait from San Francisco, are pursuing such a transformation these days on their northern California land. It would be appropriate to call it a sea change—the Pacific Ocean borders the west side of the county—but it’s probably more accurate to call it a “C-change.”

That’s a reference, of course, to carbon, with its chemical symbol, C. Efforts are led by the Marin Carbon Project, a consortium of independent ag institutions seeking to enhance the harvest of carbon dioxide from the atmosphere in order to build carbon in the county’s rangeland, agricultural, and forest soils. This carbon-farming approach is spreading across the Golden State, and attention is growing across the nation.

Harvesting carbon. John Wick’s Nicasio Native Grass Ranch serves as Ground Zero for the Marin Carbon Project. He and his wife, Peggy Rathmann, bought this Marin County ranch in the late 1990s, and began a journey toward healthier soils and more resilient ranchland, with a nice side benefit—helping heal the planet.

Chronic drought and devastating wildfires make climate change a hot-button issue in California. It’s a highly politicized issue, but one fact is not in dispute—there’s plenty of carbon dioxide in the atmosphere, waiting to be harvested. 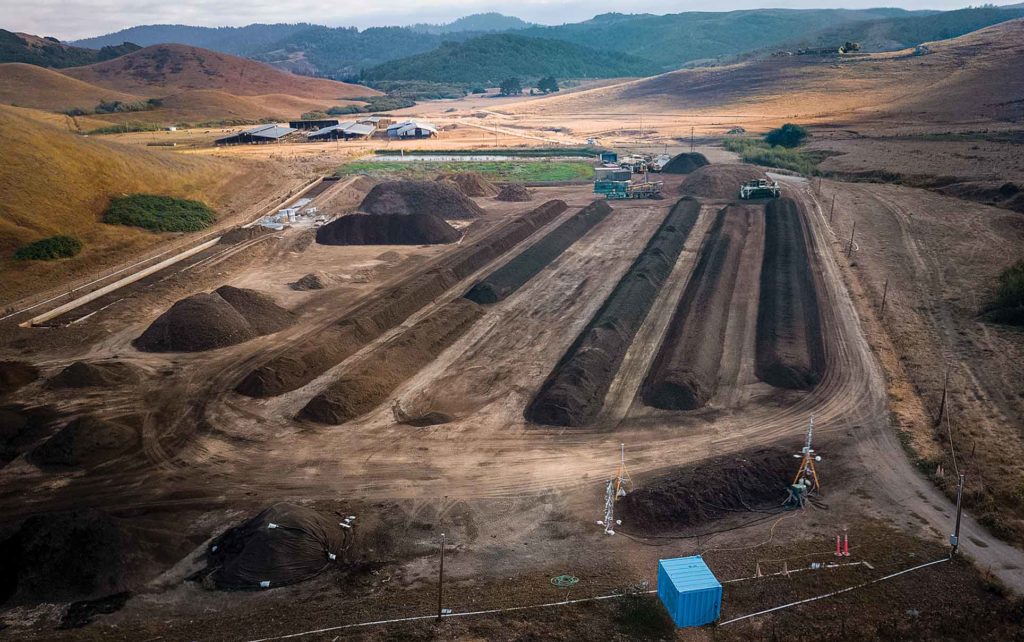 At this compost research site, scientists from the University of California-Berkeley study how to best manage the process in order to minimize greenhouse gas emissions while maximizing soil carbon sequestration.

In the Summer 2018 issue of The Furrow, we pointed out that rainfall patterns have changed dramatically in the Corn Belt; experts say the number of big rains has doubled since Grandpa ran the farm. And, in similar fashion, we can add that the air you breathe isn’t the same as it was in Grandpa’s day, either.

For thousands of years, carbon dioxide levels fluctuated between about 200 ppm and 300 ppm; in 2013, however, carbon dioxide in the atmosphere passed 400 ppm for the first time in recorded history. On May 14, 2018, the Mauna Loa Observatory, on a mountainside in Hawaii, registered a high-water mark for carbon dioxide at 412.6 ppm. The last time your human ancestors breathed from an atmosphere with that level of carbon dioxide was more than 650,000 years ago.

Experts predict that carbon dioxide will reach the 550 ppm level by 2050, unless the world takes action; the reason for the relentless rise is the simple fact that about 60% of fossil-fuel emissions stay in the air.

A growing number of voices around the world are calling on agriculture to help pull this additional carbon out of the air and cycle it into the soil. Walt Jehne with Healthy Soils Australia spoke at Gail Fuller’s Farm School, held in Emporia, Kansas, in early 2018, where he pointed out that carbon is a key element in building healthy soils.

Jehne pointed out, for example, that each gram of carbon returned to the soil allows an additional 8 grams of water to be stored. Each gram of carbon also boosts microbial activity, bringing 10 billion new “workers,” in the form of bacteria, fungi, and other soil life, that improve such things as nutrient cycling.

Soil organic carbon is part of the natural carbon cycle—the world’s soils hold around twice the amount of carbon found in the atmosphere and in vegetation—and Jehne points out that soil can be either a source or sink for atmospheric CO2 depending on land use, and how soils and cropping systems are managed. He calculates that, with proper management, soils around the world could biosequester about 20 billion tons of carbon annually; that would be enough to level off the spiraling rise in carbon dioxide levels.

Compost component. John Wick’s first attempt at improving the ranch was to remove livestock and allow it to return to the wild; as invasive species and other problems mounted, he quickly abandoned that idea. He then devoted himself to careful management of a prescribed grazing system, which perked up the health of the land and produced a lot of beef.

Wick wanted to know, however, if his soils were acting as a sink or a source for carbon. He set out to answer that question in 2007, when he contacted a scientist at the University of California-Berkeley, Whendee Silver, who specializes in soil biogeochemistry. In the process, Wick dug soil pits and installed instruments across his ranch, allowing for careful measurement of the carbon balance.

The first results were disappointing; the carefully managed grazing system was not building soil carbon; in fact, it was losing some carbon. The Marin Carbon Project team decided to add some carbon to the system to see what would happen. They put a half inch of compost over standing vegetation on experimental plots on the grazed grasslands of the ranch; for four years, researchers carefully tracked the impact. 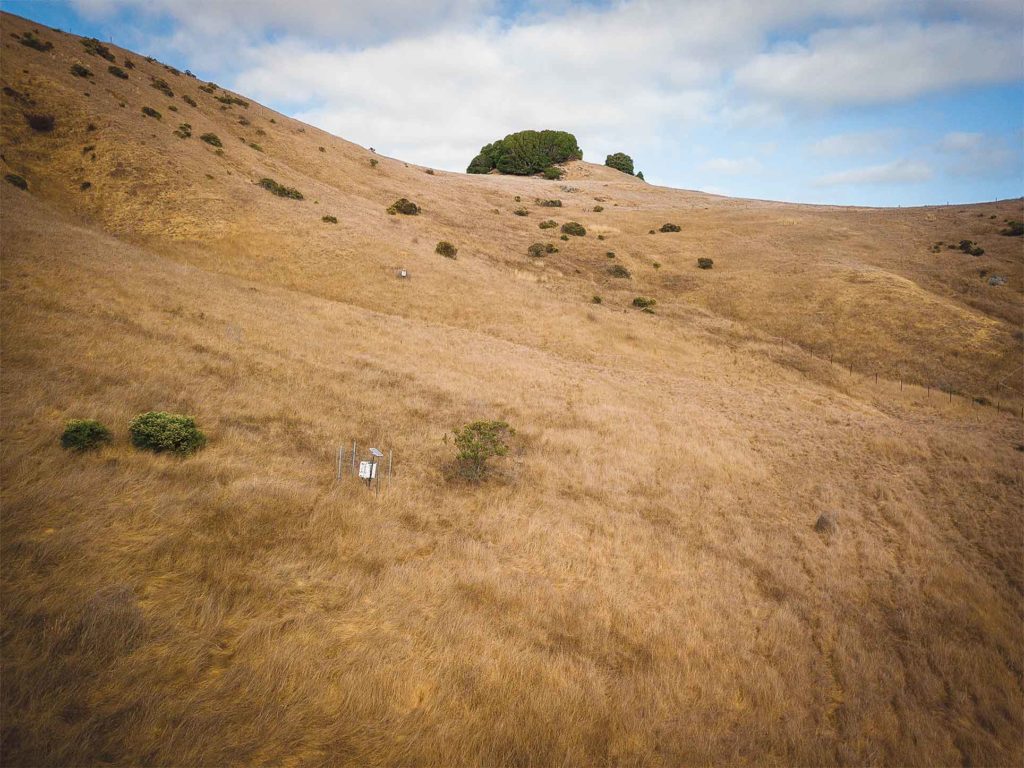 That application of compost resulted in a state change—a true “C-change.” “We ignited the soil system when we applied compost to grazed rangeland,” Wick says. “We found we could increase durable soil carbon while increasing the production of biomass. And that one application of compost boosted carbon sequestration in subsequent years. The system started self-feeding on carbon, producing more grass, storing more water, and continuing to build soil carbon year after year.”

Scaling up. That first application of compost on Wick’s ranch took place 10 years ago; fast-forward to today, and efforts are ramping up, both in research and getting carbon-farming system in place on the land.

The collaboration with University of California-Berkeley scientists has been fruitful, producing a dozen or more scientific papers; those scientists now are studying at a well-instrumented compost facility in Marin County, hoping to unlock secrets as to how best manage the process in order to minimize greenhouse gas emissions while maximizing soil carbon sequestration.

A co-founder of the Marin Carbon Project as well as a director at the Carbon Cycle Institute, Jeff Creque works with organizations such as California’s Resource Conservation Districts to bring carbon farming to the land. “We start by creating a Carbon Farm Plan,” he says. “Our team works with a farmer or rancher to assess all the opportunities for greenhouse-gas reductions and carbon sequestration on their property.”

The Carbon Management and Emissions Tool (COMET), an online planning aid developed by researchers at Colorado State University and the USDA Natural Resources Conservation Service, along with the Carbon Cycle Institute and the Marin Carbon Project, allows the team to quantify these benefits.

Make a difference. Loren Poncia was one of the first to develop a formal carbon farm plan for his Stemple Creek Ranch, a Marin County operation featuring grass-finished beef and lamb. “We have a number of projects in our carbon farm plan, ranging from applying compost  to fencing riparian areas and planting trees to provide an additional carbon sink,” he says.

“We have also reseeded pastures with diverse mixes and are starting to use cover crops. I like the fact that we’re storing more water in the soil, and our cattle have green grass for a longer time during our dry season,” Poncia continues. “Our consumers like the fact that we are doing something for the environment. Farmers and ranchers are among the few who can help the planet, since we influence what is happening in the soil.”