The internet of things comes to the farm.

The internet of things comes to the farm.

Hey Alexa — the Internet of Things (IoT) has come to the farm. The technology behind Amazon and Google’s smart home devices that allows consumers to make toast, lock their door, and start their SUV over the internet is starting to revolutionize how farmers manage their operations.

The IoT refers to any sensors and devices that have the capability to connect to the internet. Cisco Internet Business Solutions group predicts that there will be 50 billion connected devices by 2020. McKinsey Global Institute projects that it could deliver up to $11 trillion dollars in economic value by 2025.

Dairy farmers have been among the first to adopt the technology. They’re routinely using connected devices to feed and milk their cattle as well as to track individual animals movement and monitor their health. Cash croppers are using them for everything from monitoring growing conditions to controlling irrigation systems. So even though the technology is new, there are endless lists of IoT products available that can enhance a farm’s operation. 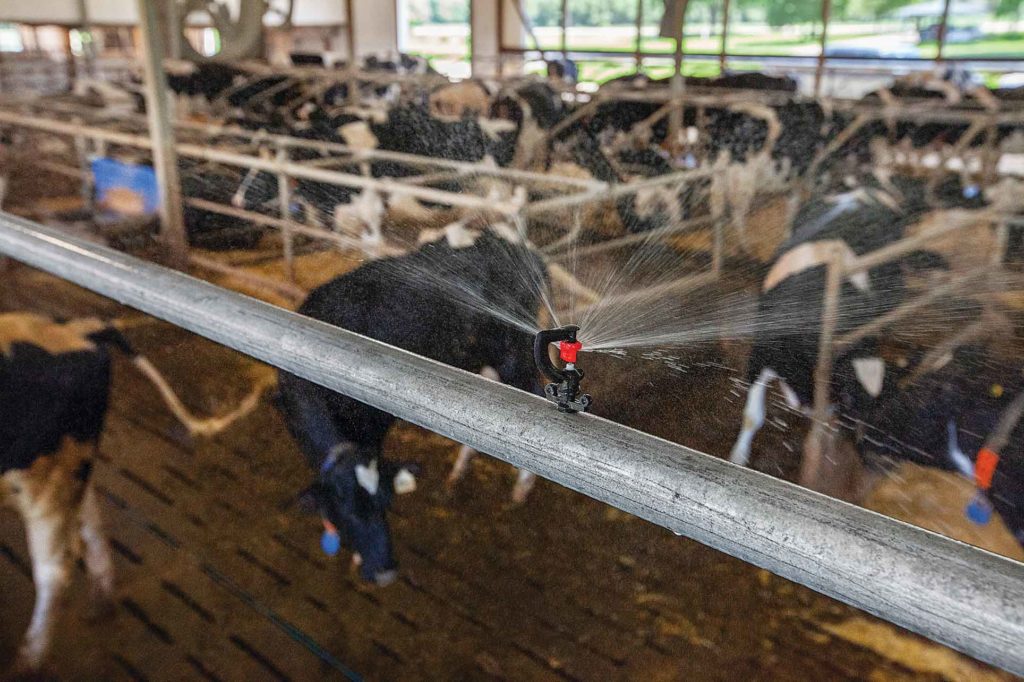 Many companies offer remote sensors that monitor temperatures in livestock barns. They will send emails or text alerts to a designated person when temperatures rise above a preset level and activate fans, cooling sprinklers, or foggers.

Changing the channel. The technology is being adopted rapidly for the same reason that the television remote control caught on so quickly a generation ago; it makes users’ lives easier. Older farmers can remember walking to the television and turning a dial to change the channel or adjust the volume. There was nothing difficult about it, but it’s much more convenient to stay on the couch and do it with a remote control. Likewise, you could physically go from bin to bin and site to site, to manually check your grain’s temperature and moisture levels using a probe or by plugging into the sensor cables. You could turn the aeration fans on or off as needed while you were there. However, the latest IoT models, like the OPI Blue, allows you to do all this from anywhere in the world with a smartphone or tablet.

Since wireless remote bin storage technology makes monitoring stored grain simple, a farmer could check all their bins as often as they like for their peace of mind. They can even program them to automatically send text or email alerts if any issues arise. These systems are so new that only a handful of farmers now have them. But if the amount of interest they’re attracting at farm shows is any indication, they’ll be common in a year or two.

Stop dad texting.  “We don’t have any yet,” says Jeff Wilkinson of Yellow Grass, Saskatchewan. “But we plan to have some in place for next year. Mostly,”  he jokes, “so dad will quit texting from Phoenix asking what the bin temperatures are.”

Similar devices are now readily available to control the environment in hog, chicken, and dairy barns too. Fans, sprinklers, or fogger cooling systems are set to activate whenever the temperature rises above a predetermined limit. They also can be programmed to automatically text or email a designated contact person if anything goes wrong.

Likewise, when one of the 27 milking robots at  Ferme Landrynoise, Daniel and Carl Landry’s dairy near Saint-Albert, Quebec, breaks down it will automatically call the herdsman on shift to let them know that there is a problem, Daniel Landry says. “Usually they will be able to troubleshoot and fix what is wrong within 10 minutes.”

The robots have made quantifiable improvements to their farm’s bottom line, Carl Landry says. But perhaps their biggest benefits are in the improvments they’ve made to the brothers’ quality of life.

“I know I can go to the lake or out to a sugar shack for a night with my friends without worry,” Carl Landry says. “I’m confident that I’ll get an alert on my smartphone if anything goes wrong. They’ve given us room to breathe.”

Until recently, consumers had to use different apps to run all their smart home devices. But the rapid adoption of Amazon’s Echo (Alexa) and Google’s Google Home has forced developers to make their devices compatible. Rob Saik, the founder of Agritrend in Red Deer, Alberta, believes something similar will happen with the smart farm, too.

“Farmers want their devices to work together but it’s hard to get the different platforms to talk to each other,” Saik says. “I believe the same thing will happen with data that happened with hydraulics. At one time every tractor manufacturer had their own hydraulic couplers; we had Pioneer ends, John Deere ends, and Case ends. Any time you moved an implement to a different color tractor you had to either use adapters or get out your crescent wrench and change the ends. You were always covered with oil until the companies agreed to use a common system that allowed producers to quickly switch back and forth. These days farmers are getting covered in digital hydraulic oil, but I’m certain we’ll eventually end up with a standard that everything will work with.” 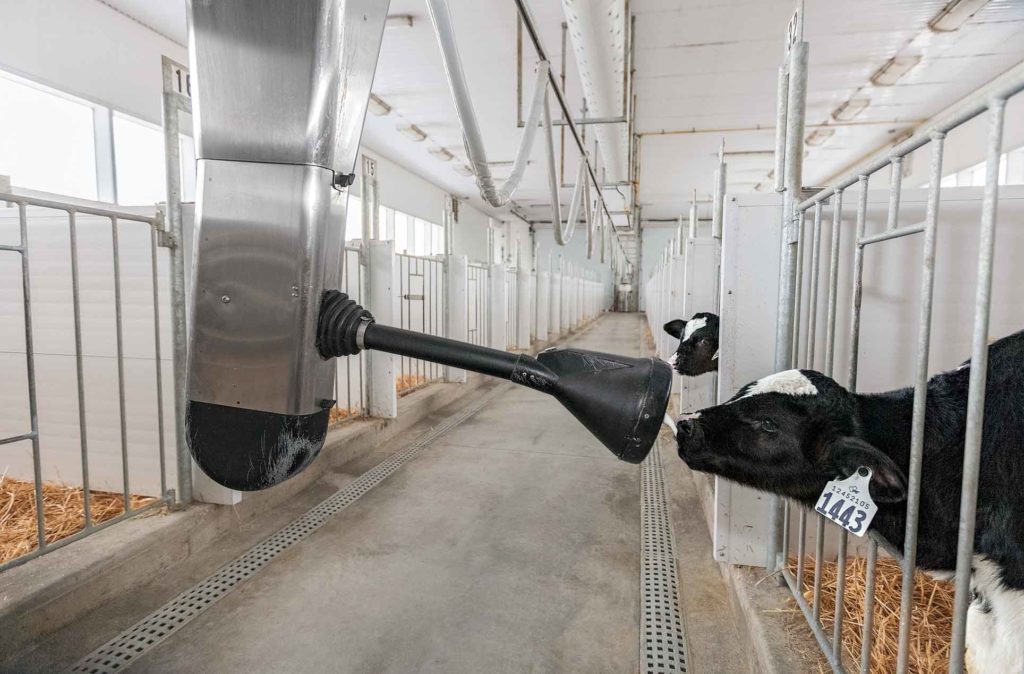 Dairy farmers are routinely using connected devices to feed and milk their cattle as well as to track individual animals movement and monitor their health.

While there are amazing smart farm devices on the market today, not all farmers are able to make use
of them. The technology requires a reliable fixed and/or mobile broadband internet connection. While most Canadian farmers have at least one internet service provider (ISP) offering some broadband service to their farmyards, their American counterparts have more limited access. (For more on this see, “The Digital Divide” at johndeerefurrow.com). Only the most fortunate in both countries have access to the affordable fast connections that urban businesses take for granted.

“Even if 3G and 4G service is widely available in a region, there are often significant gaps in the coverage,” says Ken Jackson, with Intelliconn Communication Solutions in Saskatoon, Saskatchewan. “It’s going to be even worse once they start to roll out 5G. While adopting 5G provides much faster internet connections than 4G does, the signal has 25 to 30 percent less range.”

“But there are so many people are working on the problem it’s my assumption that this nut is going to get cracked eventually and broadband internet connections are going to be ubiquitous,” says Saik. “When they do, it opens up a plethora of opportunity because suddenly the cost of monitoring anything is going to go way down. They’ll start to show up everywhere. People will install heat and vibration sensors on bearings to drop their repair costs. Agronomists will use a combination of sensors and drones to monitor fields without having to walk them.”

A lot of the research and development focus is now on utilizing low-power wide-area networks (LPWAN) to support the IoT, says Ken Jackson, CEO with Intelliconn Communication Solutions in Saskatoon, Saskatchewan. The two types that are attracting the most interest are LTE-M (Long Term Evolution Category M1) and LoRa (long range low power).

LTE-M’s biggest advantage is the devices are cheap and it’s fairly simple for mobile phone companies to tack it on to their existing LTE cellular towers. It’s great for connecting low powered battery-operated devices. One of their great advantages is they have the capacity to go into a sleep mode and only power up for periodic connections.

LoRa networks are significantly more complex. They send packets of information from a node, say a field moisture sensor, up through a gateway and into a cloud network. Their biggest advantage is the data they send is encrypted so it’s a lot more secure.

It’s still possible to utilize IoT technology as long as you have access to a broadband connection on your farm. Jackson’s company uses radio technology to create a WiFi internet mesh or dome that provides seamless internet coverage across your farm.

“We run an Ethernet cable from your ISP’s modem to a hub that’s installed on an antenna or some other high spot outside,” Jackson explains. “The hub does two things; it creates a wireless dome of coverage that extends about five kilometers (kms) across and also creates a WiFi hotspot between 150 meters and 200 meters in diameter. A second hub can be set up anywhere within the initial five kilometers dome that has line of sight to the first hub. It creates a second hotspot and extends the dome another five kms. You can keep adding them to get coverage across the farm.” 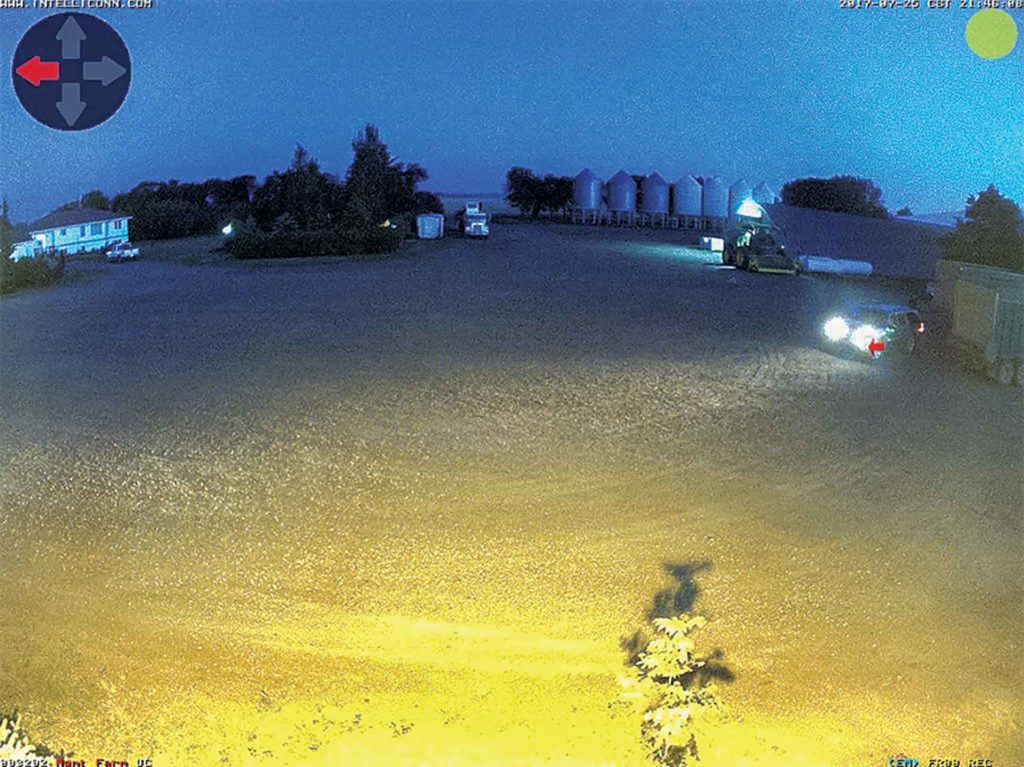 Biosecurity is becoming more important all the time as farms grow larger. Driveway sensors and security devices alert you when someone enters the farmyard so you can identify whether it’s someone who should be there.

Each component automatically transfers data from one unit to another in a seamless mesh so the signal isn’t encumbered by obstacles in the field, Jackson says. However, the data bandwidth is cut in half each time it switches through a hub so the practical coverage limit is a three-hop jump. So that would provide you with a dome that’s somewhere between 10 and 15 kms in diameter.

Plug and play. “Once the mesh is up and operating, WiFi is WiFi,” Jackson says. “It’s not a proprietary protocol. Once you have this kind of infrastructure set up around your farm you can bring home just about any device you can think of and installation is very plug and play. It even reduces the need to have good cellular around your farm since most phones are able to switch to WiFi-based voice calls.”

Many farmers want it for cameras, Jackson says. Initially people got them to increase their operational visibility but Jackson says most are now buying them for security purposes to know who’s coming and going. Cameras create special problems for data management though. Most IoT devices just send bytes of data, not megabytes, but even small image and video files are orders of magnitude larger.

Ryan Enns installed a wireless mesh over his dairy farm near Warman, Saskatchewan. He uses WiFi connected cameras to monitor when a cow was calving and keep track of who’s coming into his farmyard. It also made it possible to have an internet connection in his shop.

“The shop connection and the exterior camera worked as we hoped,” Enns says. “But the calving pens were too dark for the cameras to show us what we wanted to know. Now that we have WiFi I think our next step will be to use it to remotely monitor the temperature in our grain bins with sensing cables.”

Simplifies your life. It’s still the dawn of the IoT age and farmers are struggling to determine how to integrate these devices into their operation. But all indications are that they will simplify so many common tasks that they will quickly change producers’ day to day routine.  After all, when was the last time you changed the TV channel without a remote?