Every berry grower can always use a new revenue stream early in the season. That’s why so many producers across Canada and the northern states are taking a serious look at Haskap (honeyberries). The fruit, which resemble elongated blueberries, are ready to harvest weeks ahead of all other fruit.

Christine Rivest works with her father, Guy Rivest, at a fourth-generation berry farm Ferme Guy Rivest, located near Rawdon, in the Lanaudière region of Quebec. The berry has been a good fit. The varieties she and her father selected are ready to be picked by mid-June so their workers can be finished hand-picking them before their earliest strawberries are ready to go. This allows them to more efficiently use their workforce over the growing season, moving smoothly from Haskap to summer strawberries, to sweet corn, and then ground cherries.

Haskap are native to the boreal forest across the Northern Hemisphere. They’ve been cultivated in Japan and Russia for more than a century. But it wasn’t until after Bob Bors, a breeder at the University of Saskatchewan, in Saskatoon, developed sweeter, machine harvestable varieties that thrive under Canadian growing conditions that the berries started to attract growers’ attention here.

The berry bushes grow between 3 and 4 feet tall and are well adapted to high pH soils, Bors says. Birds can be a major pest because they’re the first fruit of the season.

The berry’s flavor varies by variety. Wild ones native to Northern Europe tend to be bitter and taste like quinine and tonic water. Some Russian varieties have been bred to be mixed with vodka, but many of the new Canadian varieties are sweet. They have some of the highest neutraceutical value of any northern fruit.

“Our Haskap taste like a mixture of black current, plum, and blueberry,” Christine says. “We transform it into jam, jelly, and syrup and blend it with strawberries to create a flavorful cream-based liquor. It’s really good.” 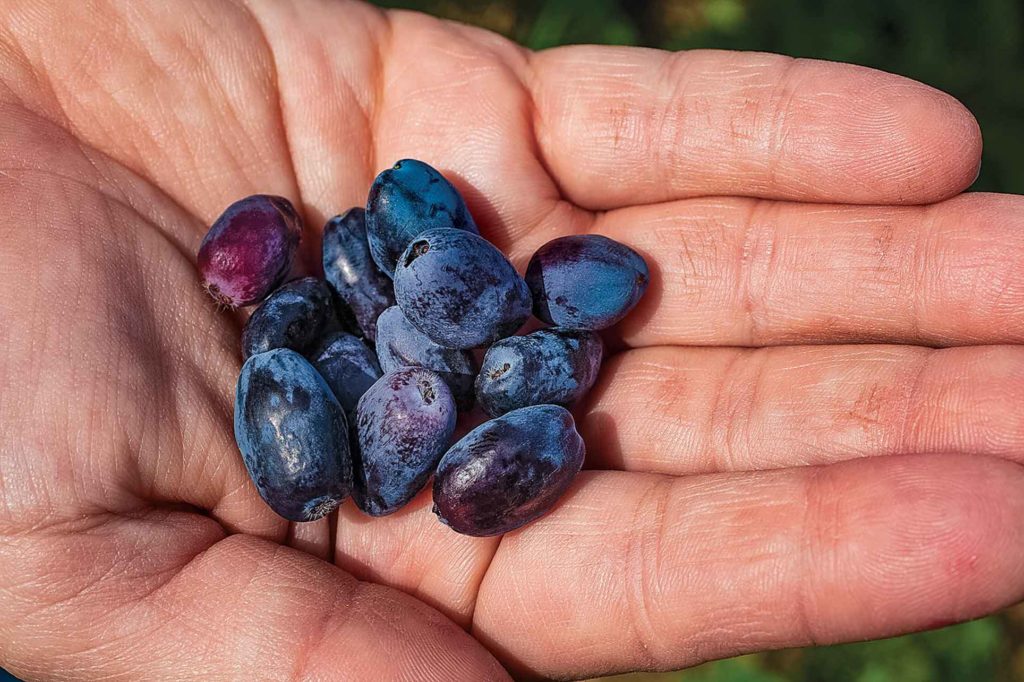 The fruit, also known as honeyberries, resemble elongated blueberries. They are incredibly hardy; the blossoms can withstand -7°C temperatures. The earlier varieties will bloom a month before the last frost and are ready to pick weeks ahead of early strawberries. They can be transformed and used to make any product you can with other berries.

“You can do almost anything you can do with any berry but it’s a little softer,” Bors says. “The skins dissolve away and you don’t really notice the seeds. So dairies find it simple to add it to ice cream. You could make pies with them, but the fruit would turn to mush so it comes out like a lemon meringue.”

The Rivests have found their Haskap to be very hardy since planting them in 2010. They haven’t had problems with winterkill even though January temperatures can regularly drop to -30°C.

“They are probably a Zone 1 plant but are very adapted to Zones 2 to 4,” Bors says. “The early varieties bloom about a month before the last frost and survive unaffected.”

“The blossoms can take a -7°C frost,” Christine says. “We had almost a full week of frost last May and the Haskap weren’t hurt at all. It’s a really good fruit for the beginning of the season.”

Growers also have the option of planting Haskap varieties that mature both during and after the strawberry season, says Bors. That allows them to spread out both their yield and their risk. Plus it also allows them to get more use out of their mechanical harvesting equipment. More information on growing Haskap can be found at fruit.usask.ca.

Succession is more a wheel than a line for the Burroughs.