The shelterbelts and field windbreaks championed after the Dust Bowl have largely been displaced by modern farming practices that include no-till and large machinery. It’s ironic, therefore, that the even newer technology of precision agriculture is showing how keeping or replacing those trees may be worth another look. Using data generated by the combine yield monitors of several cooperating farmers, researchers at Kansas State University and the Kansas Forest Service are finding that shelterbelts may actually pay their way on some farms.

“Windbreaks originally benefited crop producers because they reduced wind erosion,” says Charles Barden, forestry professor at Kansas State. “The widespread use of no-till has eased that concern and raised the question of whether windbreaks still provide a yield benefit. Thanks to cooperation from farmers in Kansas and Nebraska, we’ve begun to answer that question.”

The study compared the yield of soybeans and wheat in areas of fields protected and unprotected by field windbreaks. Also, the yield loss was estimated for the windbreak’s footprint to assess if yield increases in the protected areas of the field were enough to compensate for the area taken out of crop production by the trees.

The study used yield monitor data from 18 years (1998 to 2015) gathered on nine farms. Technicians visited each site to assess the condition, height, width, and orientation of the windbreak; those in poor condition were eliminated. Fields averaged roughly 70 acres in size. A total of 264 crop field/years were collected, but final results for soybeans came from 57 crop field/years and wheat from 44 crop/field years.

“We found that soybeans had the most positive response to the windbreak effect with significant yield increases 46% of the time with an average yield increase in the protected zone of 16% compared to a non-protected area,” says Barden. “Wheat yield increases were significant 30% of the time with an average increase of 10% in the protected area. The study also found that yield increases were enough to compensate for the footprint taken out of production by the windbreaks in 53% of the cases where a positive yield response occurred. Narrow windbreaks (1-2 tree rows), which were usually on the north edge of fields were able to compensate for the footprint more often (71% of cases) compared to wide windbreaks—typically on the south edge of the field—which only compensated 38% of the time.

“The area of reduced yields close to the windbreaks, where trees competed with the crop, are clearly visible, but the potentially high yield in the protected zone of the field is less visible,” adds Barden. “The yield monitor data clearly showed these yield trends across the field.” 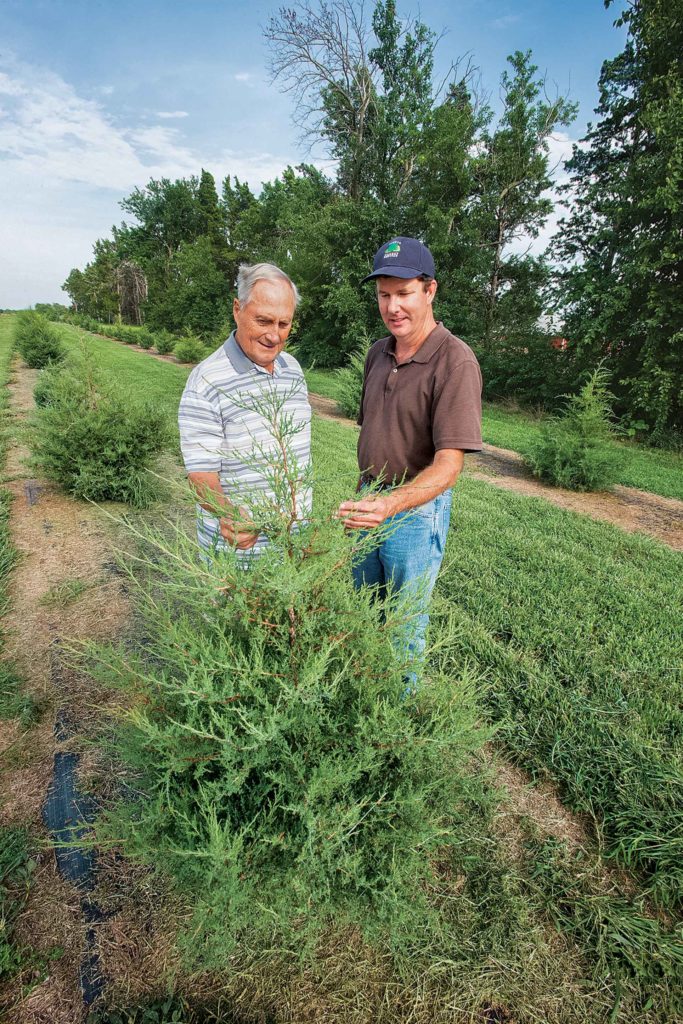 Homer Yowell (left) is working with district forester Dennis Carlson in a step-by-step process of renovating a 75-year old windbreak on his family farm.

Claflin, Kansas, farmer Walter Lenhart shared his yield monitor data with the Kansas research team and was surprised with the results. “We would call the trees around most of our fields ‘hedge rows’ and have always noticed the stunted crops next to them, but have never noticed higher yields further away. We’ve really been focused on taking some of those tree rows out in recent years, but maybe we should think about that a little harder,” he says.

Barden hopes to expand the windbreak research effort to more farms and more states. Growers willing to share their yield data on a confidential basis can contact him by email at cbarden@ksu.edu.

Following the Dust Bowl, the U.S launched the Prairie States Forestry Project through the U.S. Forest Service. By 1942, a total of 250 million trees had been planted in 30,000 windbreaks. The resulting 18,600 miles of shelterbelts were concentrated in a 100-mile wide zone from Texas to Canada. Modern farming practices have led landowners to remove a large number of these shelterbelts, and a 2009 windbreak assessment done in Kansas found that 44% of those that remained were not in good condition.

Homer Yowell grew up with the windbreak his father had planted on their McPherson, Kansas, farm in 1942, and now his son, Michael, is seeing to its renovation. The five rows of trees in the windbreak run nearly one-half mile along the south side of the farm, then jog to the north and continue east along the north side of the farmstead. “It was really a benefit to the livestock in the winter and I’m sure we don’t know all the other benefits the trees have provided. That windbreak is a part of this farm and I’m glad it’s going to stay,” says the retired farmer.

Kansas district forester Dennis Carlson, who’s helping the Yowells with the project, says when people do renovate shelterbelts it’s usually around the farmstead, and restoring field windbreaks is less common. “In Mr. Yowell’s case there were originally five rows of trees. Three of the original rows contained mostly dead and dying trees so they were removed and replaced with two new rows of cedars. After they grow a few years and begin protecting the farmstead, the last two original rows will be removed and replaced with two rows of hardwood trees such as Burr Oak, which is a hardy species in this area. The whole process will take a decade, but with proper management the shelterbelt will provide benefits for 50 years or more,” says Carlson.