The cost of feed is the single biggest expense that dairy farmers incur when they produce milk. But numerous studies have shown that feeding greater percentages of high quality forages allows producers to increase their profits by lowering their feed costs — without impacting the quantity and quality of their milk production. However, it takes a commitment to producing top quality forages to be successful.

“One Holstein herd I visited up in Canada had such good corn silage, they allowed their alfalfa to go to into bloom,” says Jeff Sherman, president of SherCanGrow, an agronomy company headquartered in East Earl, Pennsylvania. “Their high production group was on 70% forage and their low one was running 76%. They were averaging over 100 pounds with over 4.2% butterfat and 3.3% to 3.4% protein. I don’t care which side of the border you live on, you’re making money when you’re doing that.”

Dave, Carl, and Ben Loewith, with Summitholm Holsteins, near Lynden, Ontario, have raised their forage content from 57% to 63%. They’ve found it’s producing significant savings for their 460 milking cows operation without impacting their milk production.

Right timing. “The only way to do this is to produce a quality forge and make sure it comes off at the right time,” Carl Loewith says. “The biggest variables after that are inoculants, packing and covering the feed bunk. We don’t have big bunks by some standards but it’s worth the extra cost of having two packing tractors especially on fields close to home and the wagons are coming fast.”

Growing quality forages begins with good plant nutrition, Loewith says. One thing forages and dairy calves have in common is the better you feed them the faster and healthier they grow.

“Encouraging sugar production is the key to forage quality in my opinion,” Sherman says. “The goal is to help the plant create a lot of cells to produce and store a lot of sugar and increase the digestibility. It takes multiple points of impact on the plant to do this.” 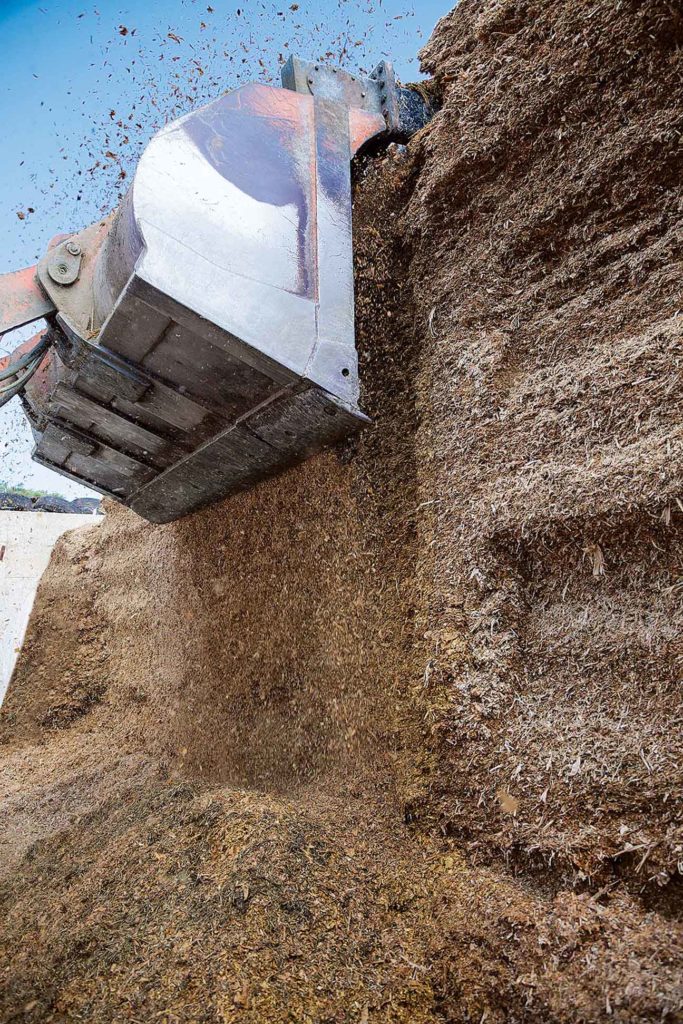 The Loewiths use a facer/defacer to remove silage from the feed bunk without creating fissures.

The first point of impact, Sherman says, is to stimulate the biology around the root zone to help bring cations into the plant. The next, for corn, would be in-furrow starter fertilizer containing a macro and micronutrient blend and a 2 by 2 application of higher volumes of macronutrients. Then, as the season progresses, add a foliar application on corn, alfalfa, or small grains and a side dress application on corn.

The Loewiths focus their attention on their core business activities, producing milk. They hire custom contractors to do the field work—planting, harvesting their haylage and silage crops, and spreading their manure.

They have a longstanding relationship with their custom contractor to put up both their alfalfa/meadow fescue haylage and their corn silage, Loewith says. He brings in enough equipment that they can do hay-in-a-day. They’ll typically start cutting around 3:00 or 4 a.m. and lay it completely flat. Then around 3 to 4 p.m. they’ll merge it all together and start to chop it at 5 p.m. They’ll put up between 100 and 150 acres by midnight. This is repeated until all their haylage acres are in the silo; their corn silage harvest is finished in two or three days.

“This offers tremendous advantages on a number of different levels,” Loewith says. “It takes a lot of the risks of the rain out of the equation and produces very uniform forage with good digestibility. All of it comes off at the right stage! This makes our nutritionist’s job easier by eliminating the need to constantly be changing the cows’ diets all the time.”

Other advantages are that they are in and out of the field so quickly that there is very little opportunity for re-growth before they chop it. This eliminates windrow or tire tracks in subsequent cuts and gives them a bigger window to apply manure. Feed bunks are packed and sealed quickly and not left open to the air for days.

“Covering three or four feed bunks is not a fun job,” Loewith says. “My son, Ben got a hold of the McMaster University rowing team and asked, ‘How’d you guys like to make some money?’ For the last two years now, 30 guys and girls, come out here on a Sunday morning and cover three bunks in about three hours. They are a dirty mess, but they’re having a lot of fun and it saves us lots of work.”

Producing the high quality that’s needed for a high forage ration is quite possible, Loewith concludes. But it doesn’t happen by accident; the details matter. It’s critical to grow the right crops, harvest them at right time and then get the bunks packed and sealed as quickly as possible. ‡

From On Life & Land: Rhythm of the Ferries

Join field editor Lorne McClinton and On Life & Land for a look at life on Canada's Discovery Islands.