Regenerative agriculture is a dramatic departure from many traditional farming practices. Trusting cover crops—rather than herbicides-—to control weeds; soil microbes—rather than commercial fertilizer—to provide crop nutrients; and beneficial insects—instead of insecticides—to control pests is a change some have likened to “getting a brain transplant.” In that case, a farmer would surely need to consult a specialist, and fortunately there are some soil health specialists available.

Several of the rock stars of the soil health movement have teamed up to form UnderstandingAG, LLC, a new business partnership that is providing regenerative agriculture consultation services to a wide range of farmers, ranchers, businesses, and conservation organizations around the globe. Gabe Brown, Ray Archuleta, and Allen Williams are the group’s founding partners, but they’re joined by an expanding list of consultants and technical advisors.

“One of our field consultants will visit a client’s farm or ranch to evaluate the operation, determine their customer’s wants and needs, and gather some baseline information, such as standard soil tests, soil health tests, water quality evaluation, and others. UnderstandingAG’s three partners—and other advisors—then review the report and develop a plan to regenerate the operation. Our passion is to allow clients to develop healthier soil, produce healthier food, and reap healthier profits,” says Brown.

Intensive training. Brown, who farms near Bismarck, North Dakota, has spoken extensively on soil health topics since 2003. “I made 200 presentations and was on 177 airline flights in just a six-month period last year,” he says. “The demand for soil health information has skyrocketed and supplying it has become a daunting task. Plus, it’s a dramatic change for farmers to make and you can’t grasp it by simply going to a field day or taking in a winter conference. It requires some intensive training and that’s what we’re set up to do.” 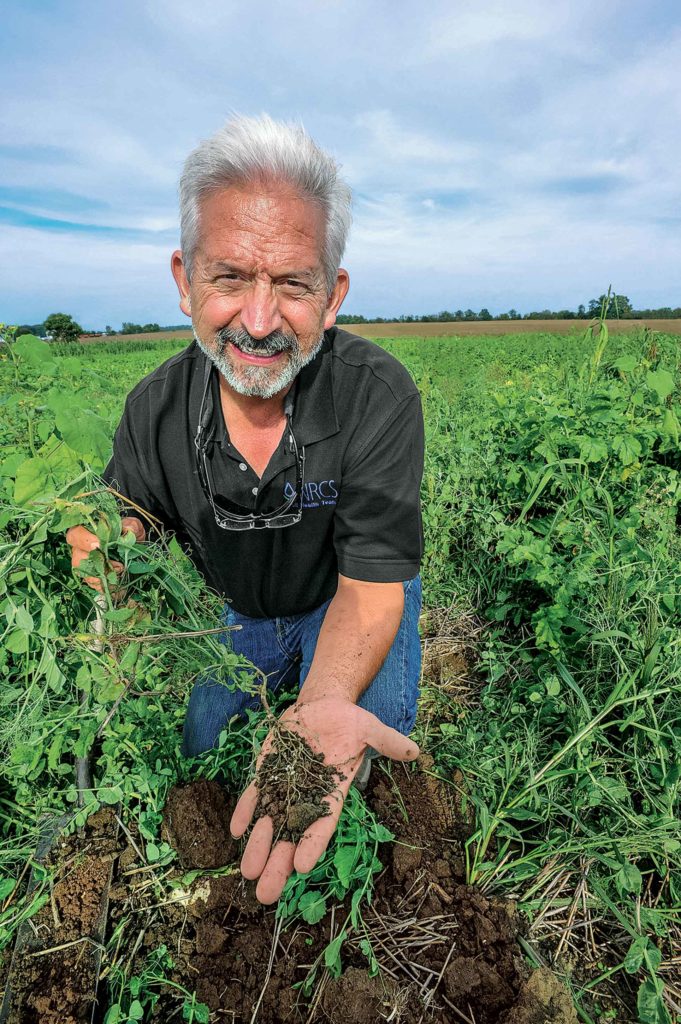 Ray Archuleta (pictured) and Gabe Brown are two of the founding members and instructors of
UnderstandingAG LLC while Steve Groff hosts on-line training sessions as the Cover Crop Coach.

Archuleta, a soil and water conservation specialist retired from the USDA-NRCS, and Williams, a sixth-generation South Carolina farmer and champion of the grass-fed beef industry, aid in developing farm plans. A team of field consultants lead by Holton, Kansas, farmer Shane New is being expanded from its current number of seven. The consultation service is provided at a cost of $1,500 per day.

UnderstandingAG (understandingag.com) was recently formed when Soil Health Consultants LLC, a two-year old partnership of the same members—plus Ohio cover crop advocate Dave Brandt—was dissolved to free up a third entity—Soil Health Academy. Brown explains that the change was made so the Soil Health Academy—which provides hands-on in-the-field training to farmers and ranchers—could operate as a nonprofit organization better able to accept financial support from an increasing number of soil health-minded philanthropic organizations.

The Soil Health Academy—now managed by Brandt—offers extensive three-day training at various locations for a cost of $1,275. “We ask all clients that we work with through UnderstandingAG to attend a Soil Health Academy at their earliest convenience as it greatly aids their understanding of regenerative agriculture,” says Brown.

Kenansville, North Carolina, farmer Adam Grady says the investment he made in the consulting service and the Soil Health Academy was quickly repaid. “We had heard a lot, and read a lot, about soil health, and we were experimenting on a few acres with Allen Williams, but we decided to dive into it and get some intensive training. After that, we went fence row to fence row with multispecies cover crops and other practices we learned and quickly saw results.”

Grady says herbicide bills were slashed and fertilizer inputs were cut by 20% on his corn, soybeans, and small grain operation. “We saved $150,000 last year because of what we learned. Our glyphosate bill alone was cut by 80% by the weed control benefits of cover crops, and fertilizer was reduced 20%.”

Learning from farmers. In 1994 Steve Groff began traveling to tell the story of the impact that a decade of no-till was having on his Holtwood, Pennsylvania, farm. A decade later he added the art of cover cropping to his message and now he spends roughly 60 days a year on the road as The Cover Crop Coach (stevegroff.com). “Our goal is to help farmers adopt regenerative agriculture, but I’ve specialized in cover cropping because that’s the part of it that I know
the best,” says Groff.

Groff delivers his training through speaking and training engagements as well as on social media and the internet. In addition, a $299 annual fee buys membership in his Cover Crop Innovators internet group where a global network of farmers, agronomists, and trainers share their cover crop successes and caution against common pitfalls. Groff hosts weekly webinars on pertinent cover crop topics with the group that include question and answer opportunities for participants. Currently, 96 past webinars are archived and available for review.

“We’ve got 200 members in the Cover Crop Innovators and there’s also a closed Facebook group where members can share experiences,” adds Groff. “The regenerative approach is new, too, and there’s a tremendous demand for information. We allow farmers to learn at home or even while in the tractor cab.”