Just what is a jujube [jü-jüb-ē]? Besides being a bit fun to say, it’s a scrappy and ancient fruit hailing from China with just the right traits to potentially add some reliable diversity for New Mexico orchards and small acreage producers.

Also known as a Chinese date, it tastes a bit like a plum, or even an apple or pear depending on the variety, and has been enjoyed for thousands of years in Asian countries. Its nutritional profile is exceptional. Jujubes pack four to ten times the vitamin C as oranges and are high in fiber and antioxidants.

Their agronomic traits are equally as attractive for fruit researchers and fruit growers in New Mexico.

“Jujubes bloom in late May and can bloom for up to 2 months,” says Shengrui Yao, New Mexico State University fruit specialist. “Even if we get a frost in May, the later blossoms will produce fruit.”

Yao is identifying jujube cultivars that will thrive in New Mexico. In her trials at the NMSU Sustainable Agriculture Science Center in Acalde, she’s produced a selection to suit all needs. Some are ideal for drying, others for fresh eating, multipurpose use, or ornamental.

The ability to produce despite a frost is a critical feature. In the early 1900s, the Espanola Valley and neighboring valleys just north of Santa Fe were known for their fruit production—especially apples. 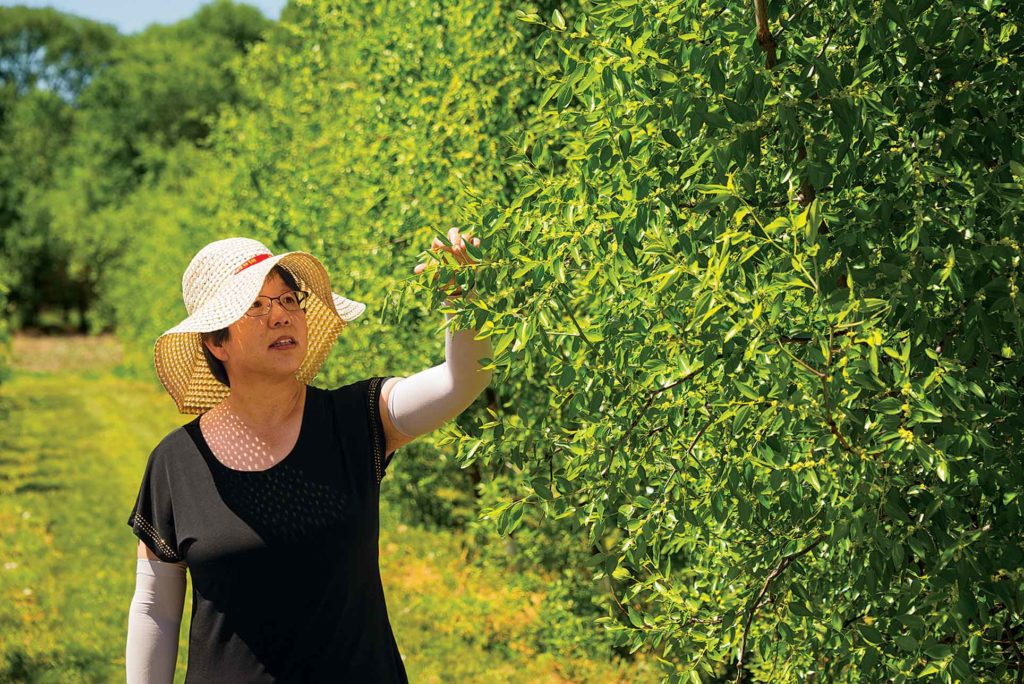 In 1971, temperatures plummeted to -34F. Most fruit trees were damaged or killed, and many orchards didn’t bother to replant. Frost is still a risk for those families that continued in the fruit business.

“Frost affects almost all area fruit trees. The worst are apricots because they bloom early, but apples, peaches, and cherries are all impacted, too,” Yao says.

There have been other alternative fruits tried over the years, such as blackberries or strawberries, but some farmers don’t want to make the shift away from perennial fruits to more labor-intensive berries. Jujubes may better fill this slot giving growers a perennial fruit that is highly likely to produce most years.

Proven out. While Yao’s research will yield top-producing cultivars, jujubes already have a fairly long history in the area, proving they can be successful. Many could be found in landscaping, volunteering along the railroad and growing in a few adventurous orchards.

There are many ways to eat jujubes: fresh, steamed, boiled, dried, in jams, as dumplings with sweet rice, and the list goes on. The cultivars best for drying are appealing in New Mexico because the dry weather means all the fruit can be left on the tree to dry and harvested all at once.

“I’ve recommended the fresh cultivars more because they’re easier to accept,” says Yao, who has held many field days including taste testing. The market would have to be built, but it’s off to a bit of a start. “There’s a local organic grower selling dried jujubes for $16 per lb.,” Yao says. “They sell for $19.56 per lb. on Amazon.”

With a strongly food-driven culture, there are thriving farmer’s markets in nearby Santa Fe, Albuquerque, Taos, and Los Alamos. With some consumer education, there is potential for the unique fruit to take off.

From On Life & Land: Rhythm of the Ferries

Join field editor Lorne McClinton and On Life & Land for a look at life on Canada's Discovery Islands.