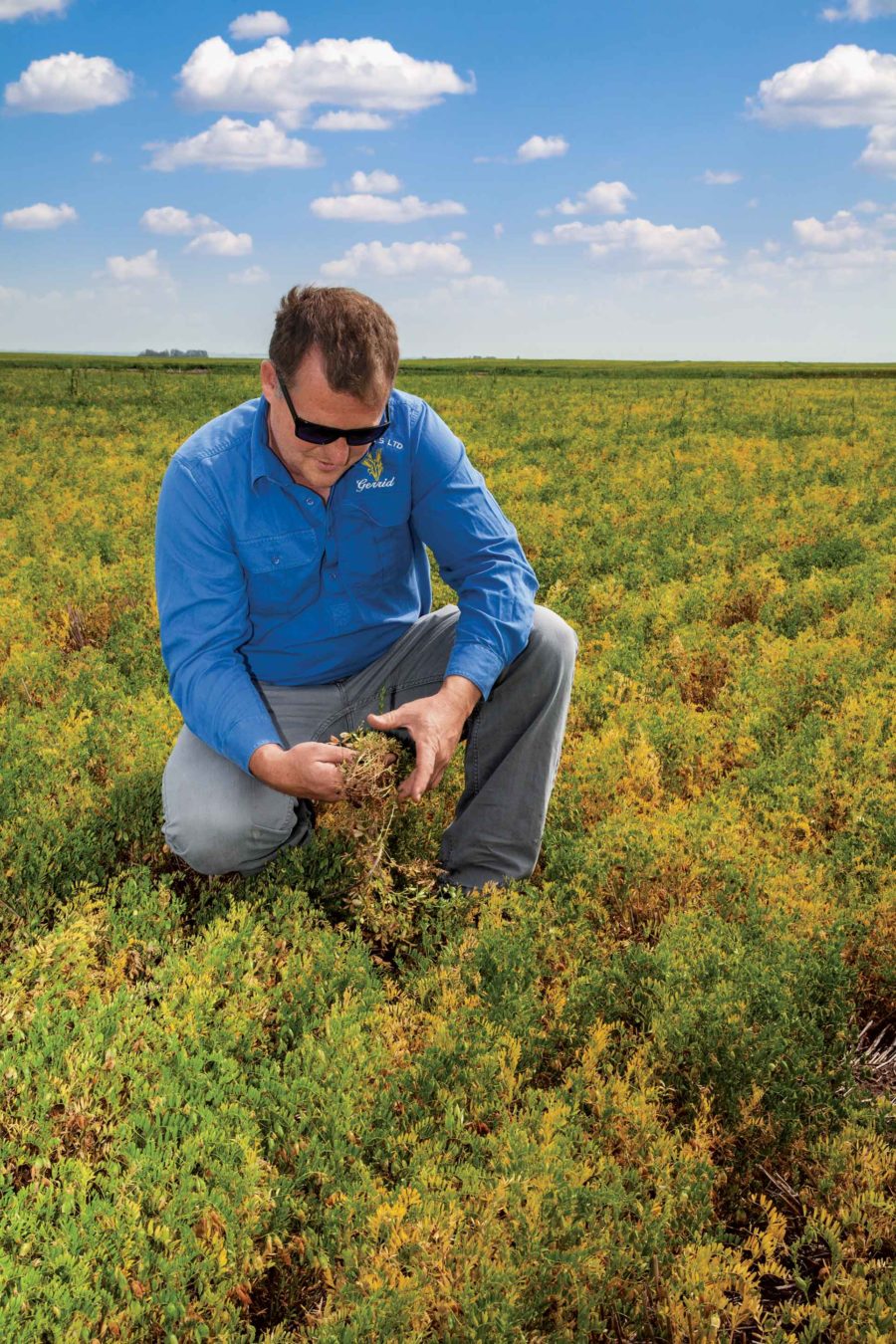 Wild oats has been dethroned; kochia (kochia scoparia) is now rated as the top weed issue in Saskatchewan.

It was the top weed concern in pulse crops across all three Prairie provinces in 2018. It’s almost certain that herbicide resistance (HR) will make it a bigger headache in the future.

Kochia has been a major weed problem across the Prairies for years, says Sherilyn Phelps, agronomy manager with Saskatchewan Pulse Growers in Saskatoon, Saskatchewan. But two years of drier-than-normal conditions have contributed to the major outbreak experienced in 2018.

The widespread presence of HR kochia is a problem no matter what crop a producer grows, but Group 2 resistance is a particular concern with pulses. Nearly all in-crop herbicides for broadleaf weed control in them are Group 2 products. So growers are forced to rely on pre-emergence and pre-seeding burnoff options.

Tumbleweed dispersal. Kochia is a tumbleweed; that allows it to disperse its seeds across the field, neighboring fields and adjacent areas. A small number of escapes can easily produce a huge mess, especially when less competitive crops with limited weed control options, like lentils, are part of the rotation.

“Group 2 resistant kochia is definitely a concern on our farm,” says Gerrid Gust, a pulse grower from Davidson, Saskatchewan. “Glyphosate was never to be very strong on kochia but I haven’t noticed Roundup resistance yet.”

Kochia concerns have forced Gust to implement new year-round planning and control strategies for growing lentils on his farm. They would look familiar to those who pioneered the crop in Saskatchewan back in the 1980s.

He starts by selecting his cleanest fields for lentils to keep kochia from taking over and applies Focus, a Group 14 and 15 product from FMC Canada in the late fall before freezeup. He follows this with a pre-plant tankmix application of glyphosate and Heat, a Group 14 from BASF, in the spring.

“There are no quick fixes with a one time application!” Phelps says. “Start planning in the fall. Mow or bale kochia patches before the seed hits maturity to remove new sources of seeds and seedlings. If you are planning to seed pulses then you should put down soil residual herbicides that have activity on kochia in the fall, especially in drier areas where spring rainfall can be limited. Then come in with a preseeding burnoff with a tank mix that includes both glyphosate and a product that has activity on kochia. Don’t use straight glyphosate alone because we now know that 40% to 50% of the kochia could be resistant to it.”

Research shows that 60% of the kochia is up before early May seeding dates, Phelps says. Getting good control of those early germinating seedlings prior to the crop coming up is important with pulses, primarily due to limited in-crop options. Growers could consider delaying seeding to ensure more kochia has germinated and is controlled by the burnoff applications.

Good livestock feed. Other  control options include bumping your seeding rates to provide increased crop competition. Manage the seed set by mowing, cutting or baling the kochia patches prior to seed set. It makes good livestock feed and can make up
to 40% of your cattle’s ration.

“There are also pieces of machinery, like the Harrington Seed Destructor, that grind up the chaff behind the combine at harvest time,” Phelps says. “These can reduce kochia seed viability by up to 99%. Also, don’t forget to control kochia patches in non-cropland areas such as ditches, sloughs and saline patches and pastures.”

“There aren’t any easy options to control it anymore,” Gust says. “But you do what you can to prevent them from producing seed. If you don’t you’re just setting yourself up for failure down the road.”